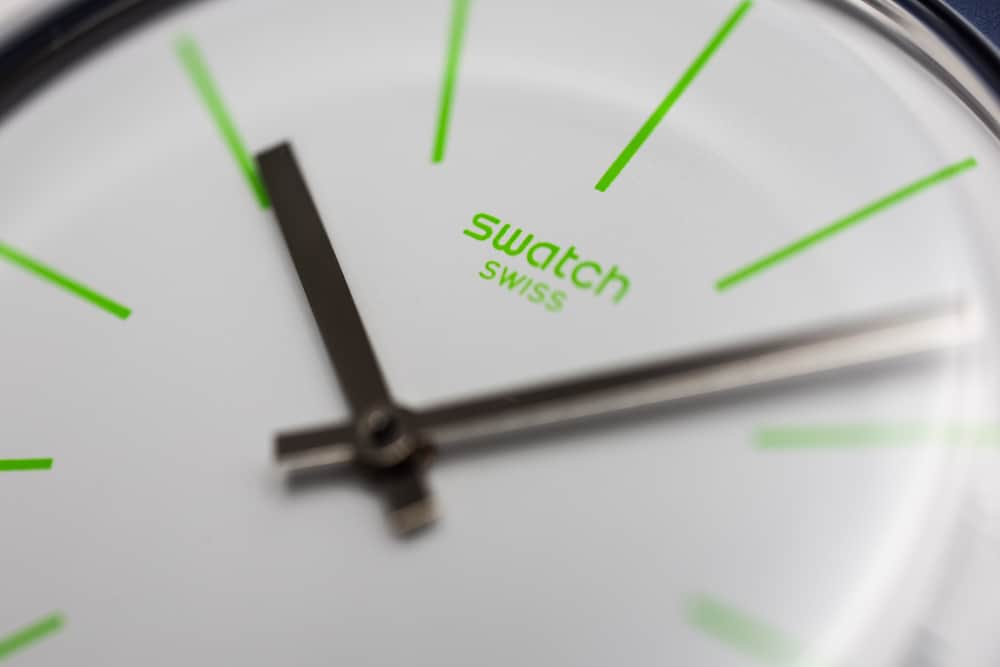 Swatch is one of the most unique watch companies in the world born out of the quartz crisis, which almost destroyed the entire Swiss watchmaking industry. While most Swatch timepieces are extremely affordable, a few have sold for mindboggling amounts.

In this article, we’re going to explore watches made by Swatch, starting with a brief history lesson and some tips for identifying them and ending with showing you some of the rarest Swatch watches and recommending a few websites where you can sell or buy your own.

Swatch was founded in 1983 when mechanical Swiss watches were outcompeted by much cheaper quartz watches made in other European countries and Japan. There were just 600 Swiss watchmakers left, which is nothing compared to 1,600 in 1970.

The Swiss watch industry was dying off, as people stopped being interested in expensive watches with mechanical movements, and would rather buy a cheaper watch that had a quartz movement.

That’s where Ernst Thomke, Elmar Mock, and Jacques Müller come in. They decided to jump on the opportunity and manufacture affordable Swiss watches that could be bought without breaking one’s bank.

In just less than 2 years, Swatch had sold over 2.5 million timepieces, and today is the largest watch manufacturer in the world.

How to Identify Swatch Watches?

Finding the model and additional information about your Swatch watch is pretty easy because every model has a reference number on its original box, the guarantee, and the back of the case.

The code consists of letters and numbers which indicate a lot of valuable information about the watch in the following order:

We recommend this page from one of the authorized retailers of Swatch watches if you want to learn more information about the reference codes.

However, if you want to identify your watch, simply Google “X Swatch watch”, where x is the reference code of your watch, and you’ll surely find what kind of model it is.

We also recommend visiting this page, which includes the biggest catalog of Swatch watches, starting from 1983.

Is a Swatch Watch Worth Anything?

Swatch watches are neither antique nor luxurious for them to be among the most expensive watches. They were never designed to be a sign of wealth or status, so you can find many Swatch watches for as little as $100, even if they were made in the 1980s.

However, some Swatch watches have sold for as much as 5-figures, so first, let’s see the most important factors that are influencing the value of Swatch watches:

While you can buy even some of the oldest Swatch watches for cheap, the age of a watch is still a factor playing a part in its value. In general, older Swatch watches are going to be more valuable than the newer ones.

When collectors are looking to buy real antique watches, they might be ready to pay a lot for a slightly damaged item, because there might not be another opportunity to buy such a watch, as they were made a long time ago.

However, Swatch watches aren’t considered antique, because there’s an unwritten rule of an item having to be at least 100 years old to be seen as antique. Additionally, they aren’t even vintage, as most collectors agree that vintage items have to be at least 40 years old.

It means that there are many Swatch watches in mint or excellent condition, which makes the value of watches that aren’t “as new” plummet. Why would you pay a lot for a watch with a scratch, when you can buy the same watch that looks as new?

As most Swatch watches aren’t that valuable, people buying them are most likely going to wear them. No one is going to display a $200 Swatch watch behind the glass as some rare antique item.

So the vast majority of Swatch watches that are sold are in working order and 100% functional. Even rarer Swatch watches can’t sell for a lot if they aren’t ticking.

Arguably the most influencing factor determining the value of a Swatch watch is its rarity. As they aren’t antique, most Swatch watches aren’t scarce and can be readily bought online.

However, there are limited edition Swatch watches that were produced in extremely limited runs, making them scarce and much more valuable than the rest.

Knowing this, we can take a look at X most expensive Swatch watches: 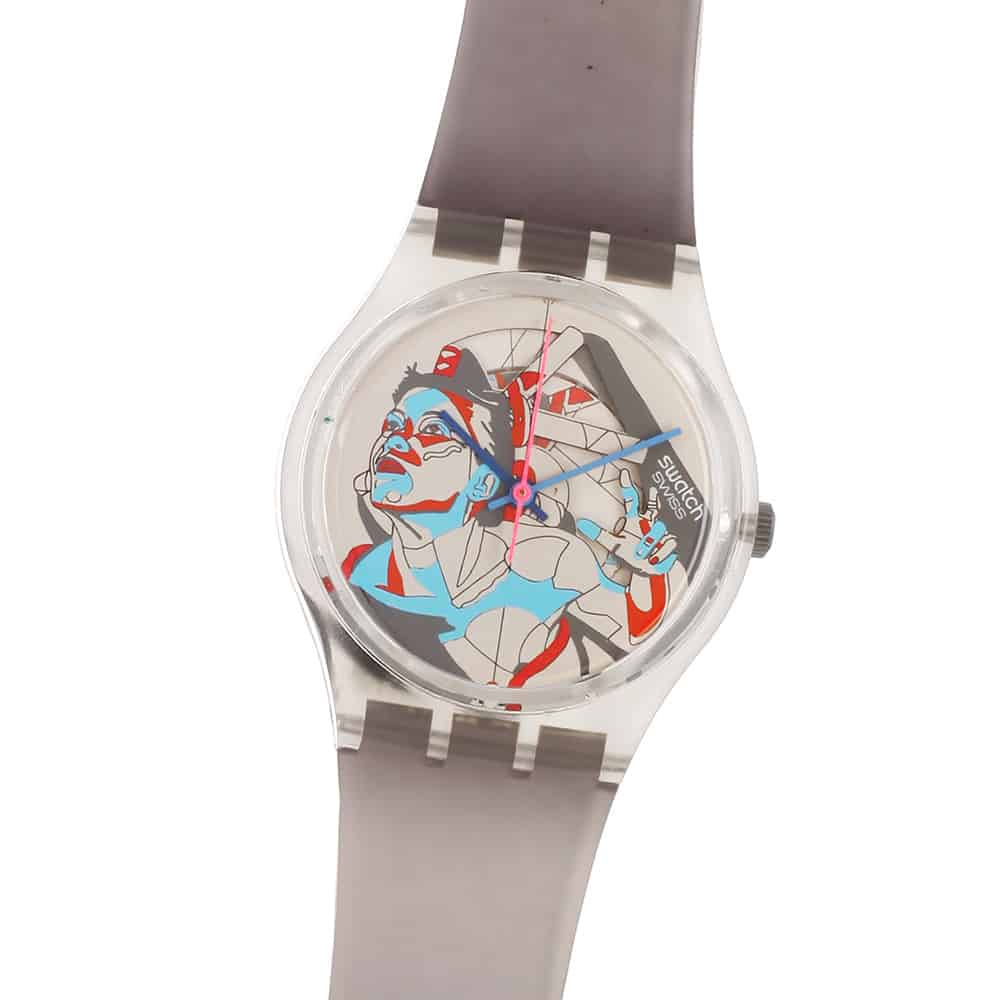 This watch was launched on March 20, 1985, during an art exhibition in Paris. It was a part of the Swatch Spring/Summer collection and was a limited edition piece with only 120 such watches made.

What made it worse is that all 120 watches were given away to the VIPs of the exhibition, so you could never even purchase them from a store.

The dial design of this watch was designed by French artist Christian Chapiron, going by the alias Kiki Picasso, hence the name of the watch. What makes this watch special is that each of the 120 dials is unique, featuring different colorways of the art. In 2006, Swatch surprised everyone by launching a slightly upgraded version of their Diaphane One watch. This one was called Diaphane Turning Gold and featured an 18k pink gold bezel and crown, which indicated that it’s not your ordinary Swatch watch.

It was what’s called a “skeleton-watch” because you can see its movement through a transparent case. The movement was also prestigious, consisting of 25 hand-wound rubies.

Despite being like no other Swatch watch made before, it kept the brand’s spirit thanks to its translucent plastic case. Upon launch, Diaphane One Turning Gold cost about $8,000, but only 100 were ever made.

As a result of that, the real value of this watch today could be much higher than that.

This might be the most unique watch by Swatch ever. It was designed by Andrew Logan to accompany his Alternative Miss World contest that was sponsored by Swatch.

The watch is called Jelly Fish, because well, its strap was fish-shaped to accompany the theme of that year’s contest. The theme was “Under the Sea”, and what else could suit it better than a watch that looks like a fish.

Only 50 such watches were made, and we couldn’t find any auctions that have sold them. However, Andrew Logan repurposed one of the watches into a jewelry piece that sold for $10,000.

This watch was a part of the 1989 Swatch Spring/Summer Collection and features a minimalistic art of Mephistopheles, a trickster figure originating in German folklore.

Oigol Oro watch was no ordinary piece from Swatch. It was a limited edition watch coming from Swatch’s “Design Your Own Swatch” contest. It was won by Italian artist Mimmo Paladino, and only 140 such watches were ever made.

Not only that, but Swatch gifted them to famous people, including Tom Cruise, Princess Caroline of Monaco, Prince Charles of England, and Mikhail Gorbachev, making the timepiece extremely exclusive.

Where to Sell and Buy Rare Swatch Watches?

If you’re interested in selling and/or buying rare Swatch watches, we recommend the following websites:

At the time of writing this article, eBay has over 25,000 listings related to Swatch watches, making it a website with the biggest selection of second-hand Swatch watches on the internet.

However, it’s largely based on trust and previous transactions of the seller, and while unlikely, you could be scammed and get a watch that’s not in the same condition as described in the listing’s description, or even receive a worthless replica.

If you’re looking for a rare Swatch watch and don’t want to risk being tricked, Sotheby’s is your best bet. It’s one of the most prestigious auction houses in the world, hosting online auctions where anyone can participate.

Every item sold there is verified to be authentic by antique and collectible experts, so you can always be sure that you’re buying exactly what you think you’re buying.

Swatch watches are as popular as they ever were. Whether you’re interested in getting a rare model from the 1980s or are happy to buy one of the currently sold models, we can promise that it’s going to become one of your favorite accessories.