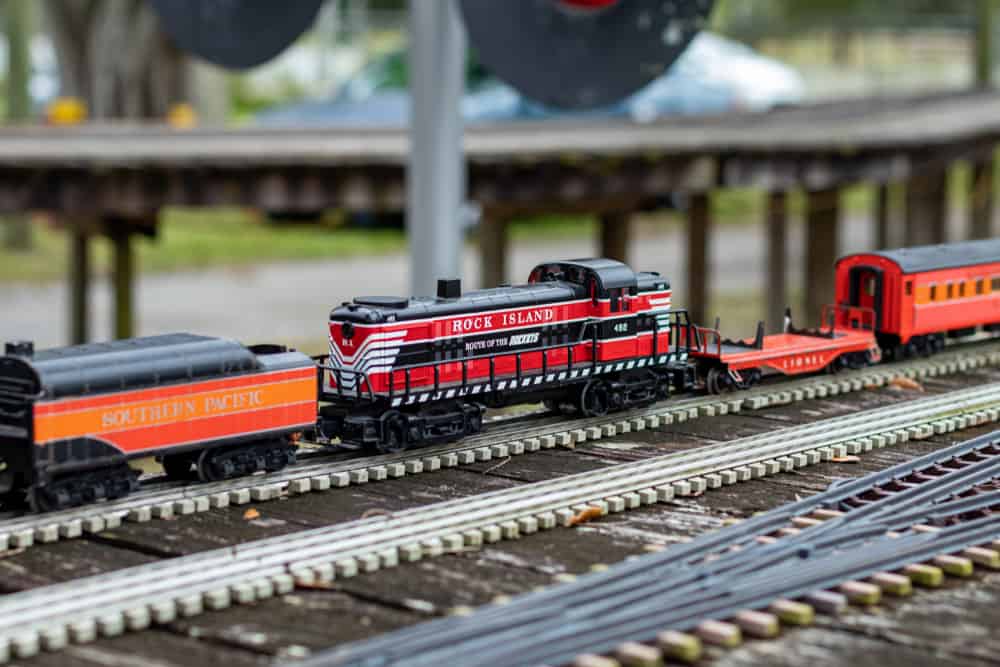 In old-time movies, people who loved trains were depicted as cute and quirky … but also weird. And contemporary think-pieces (mistakenly) label these characters as autistic.

But whether you collect trains for passion or profit, it helps if you can identify the most valuable American Flyer trains. So let’s look into some tips and tricks to set you on the right path. 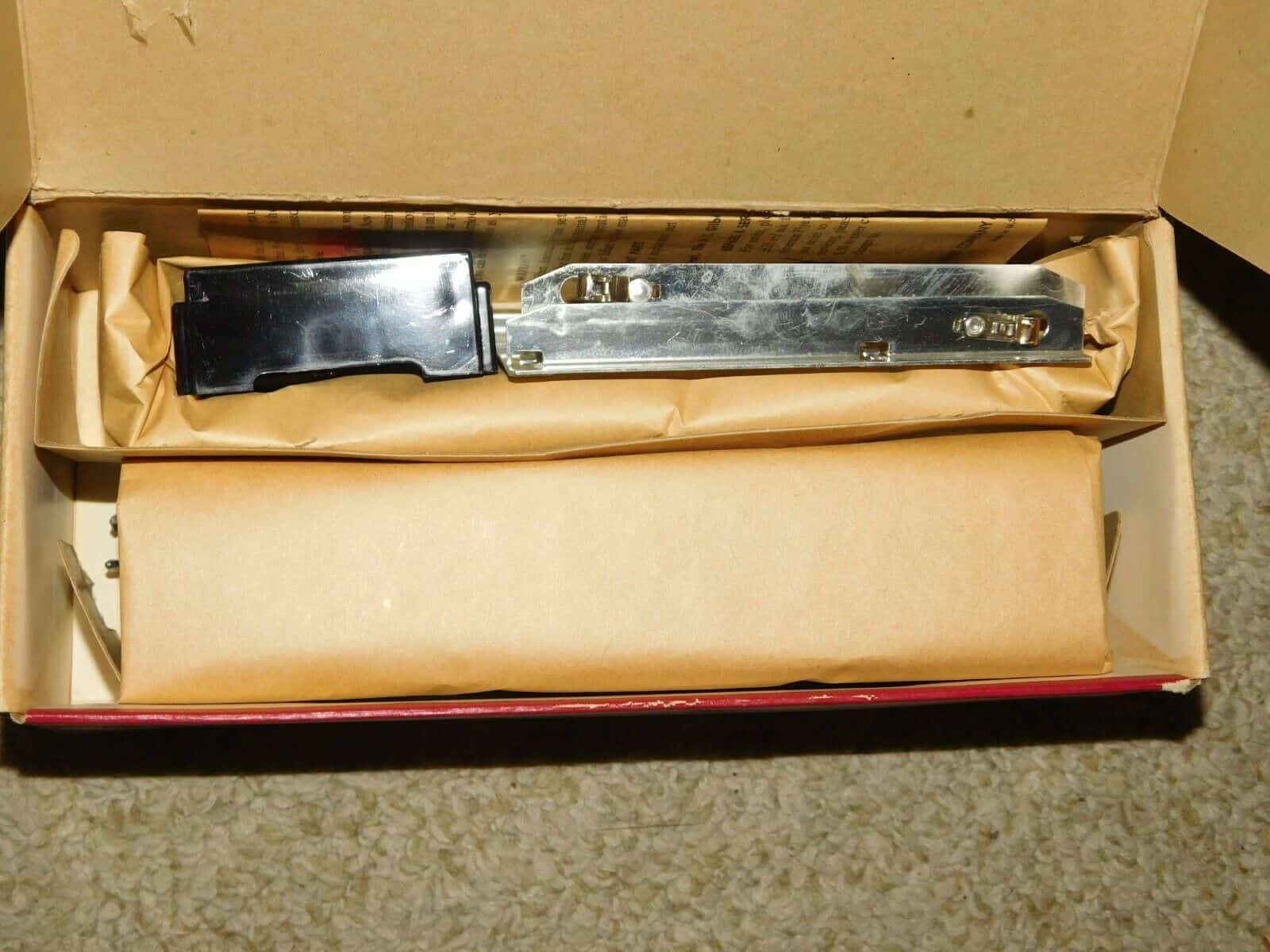 When you hear the word American Flyer, what comes to mind? Bombers? Ace Pilots? Top Gun? As it turns out, American Flyer is the brand name of a set of toys seemingly made for kids. These tiny trains were replicas of real trains running on functional railway routes.

Before the 1900s, companies like Lionel mostly made large clockwork toy trains. Edmonds-Metzel Hardware Company (which later become American Flyer) was the first firm to make electric ones. William Ogden Coleman and William Hafner partnered on this train project. AF calls these Wide Gauge while Lionel calls them Standard Gauge tracks. O trains run on a customized three-rail track, though that later reverted to two-track systems. AFs premium wide gauge trains were called Wonder Trains and had vivid colors. They came out in 1925. 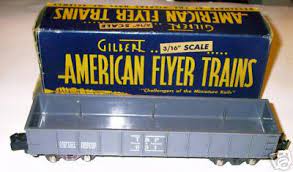 At first, the company made Chicago Cars, a line of passenger train toys with Chicago on the side. Edmonds-Metzel (initially a hardware company) first rebranded its trains as American Flyer in 1908. In 1929, the Lionel Corporation and American Flyer bought the bankrupt Ives.

They collaborated during the Great Depression before Lionel bought American Flyer’s shares of Ives in 1931. By 1936, AF closed its stores but still made O trains. Alfred Carlton of the A.C. Gilbert Co. bought the whole setup in 1938 before moving operations to Connecticut in 1939. When A.C. Gilbert took over American Flyer, it was a good trade and the business stayed profitable for the next few decades. But by 1966, the company had collapsed, and by 1967 when Lionel Corp. stepped in, the brand was bankrupt. No toy trains were released for ages.

You probably know that when you buy a model train, it comes as individual pieces that you have to assemble. That’s part of the fun. And once you finish, the train moves on its railroad, complete with functional lights and choo-choo sounds. Get one with the instructions intact! 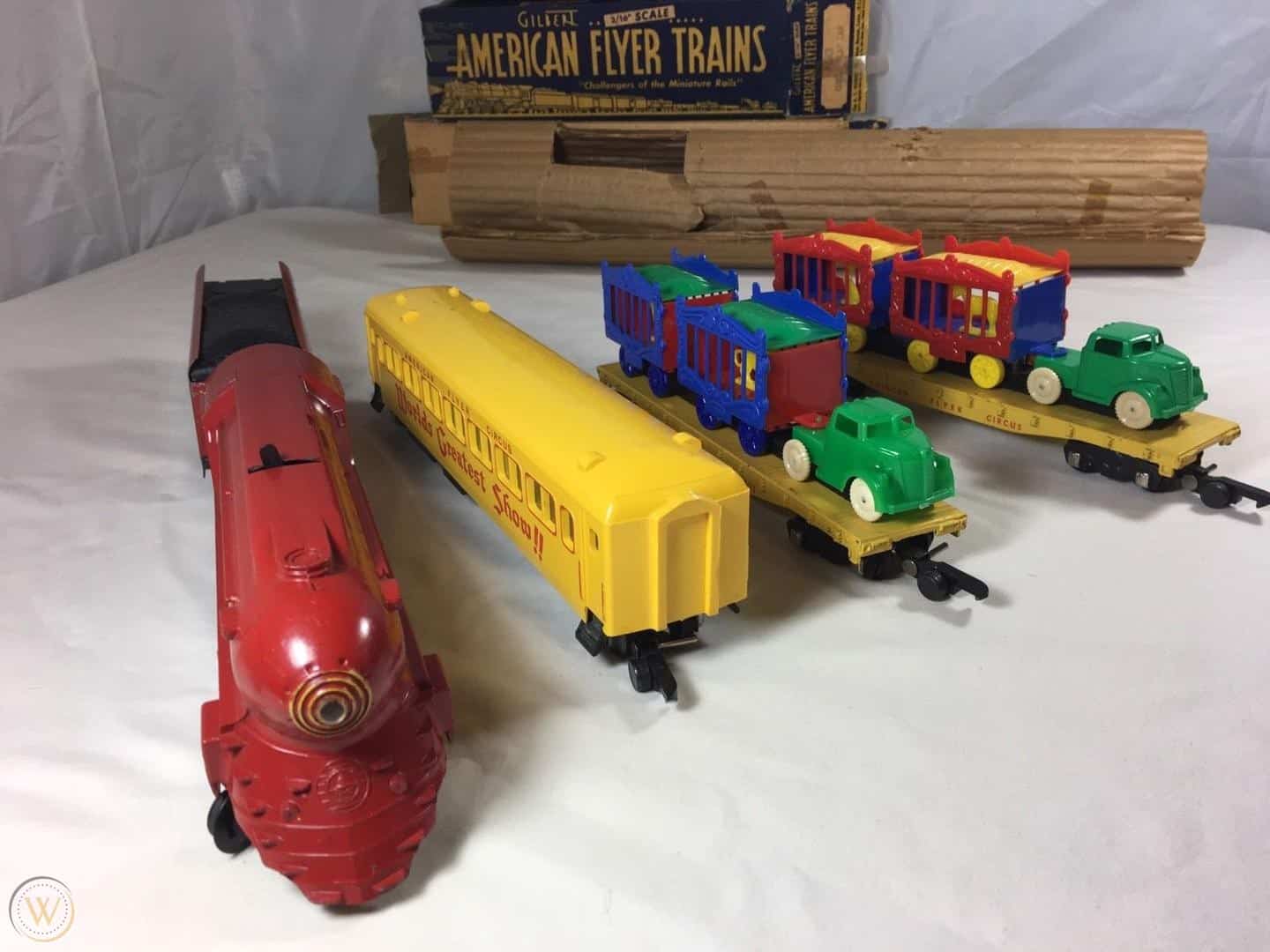 Unfortunately, Lionel Corp. didn’t do as well as they expected. They sold their operation to General Mills in 1969 when they, too, went bankrupt. This new owner tried releasing a few train series in 1979, then resold to the Kenner Toy Company in 1984. This didn’t really help.

By 1985, Richard Kughn bought the lot. He was an avid collector of toy trains, so he pushed the hobby into the early 90s before cashing out. He kept some shares, as did Neil Young. The turnaround company Wellspring became the majority shareholder, rebranding as Lionel LLC. 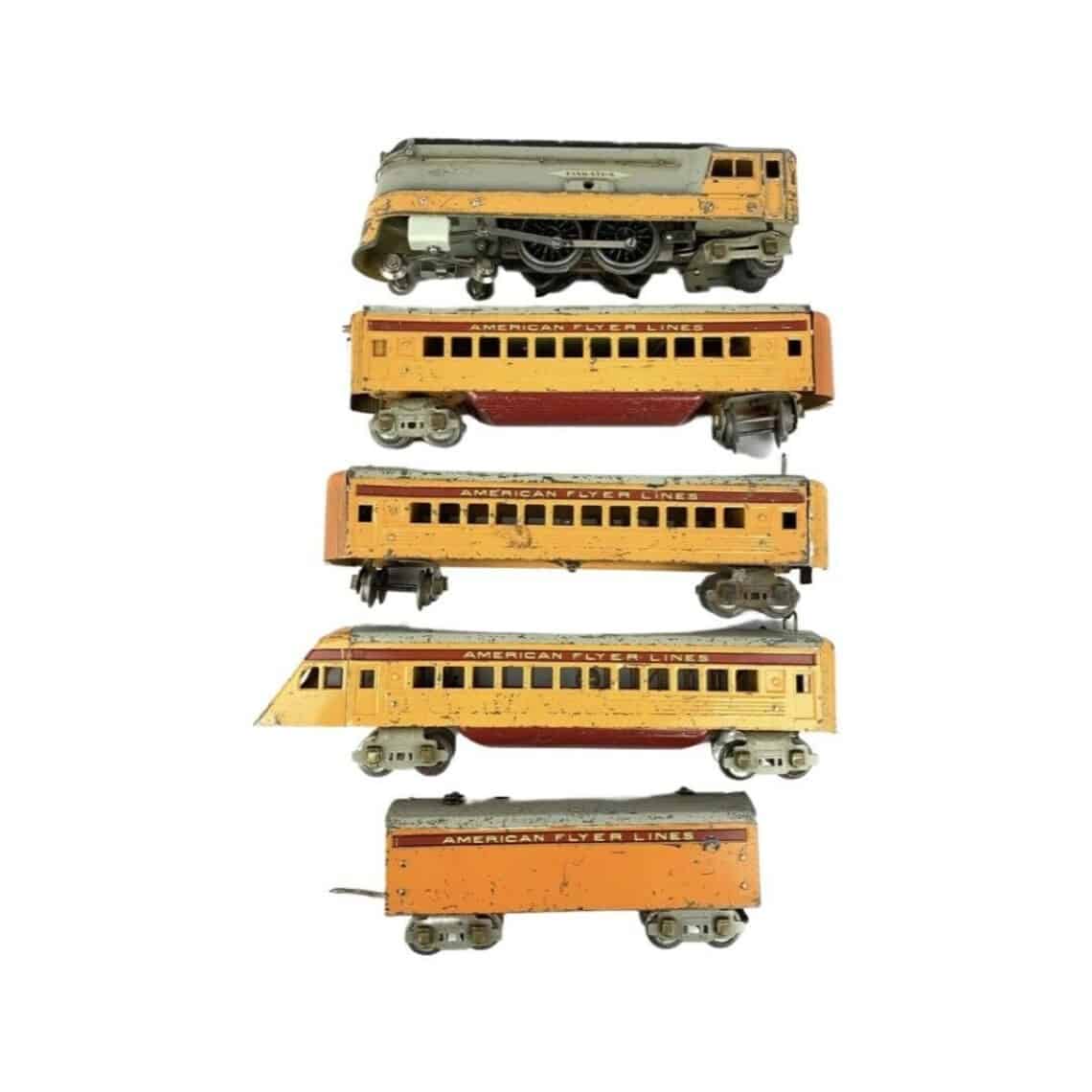 You might know Neil Young for his country songs catalog. Or for his recent Spotify boycott. Investing in a toy train company was a smart business decision, and he brought his special music talents into play, pun intended. He helped design a sound system for them.

Lionel LLC – with Richard Kughn and Neil Young as minor shareholders – was determined to revive American Flyer. They even released a new batch in 2022. So if you’re collecting toy trains to re-sell, look out for their original maintenance manuals. They can raise your price. 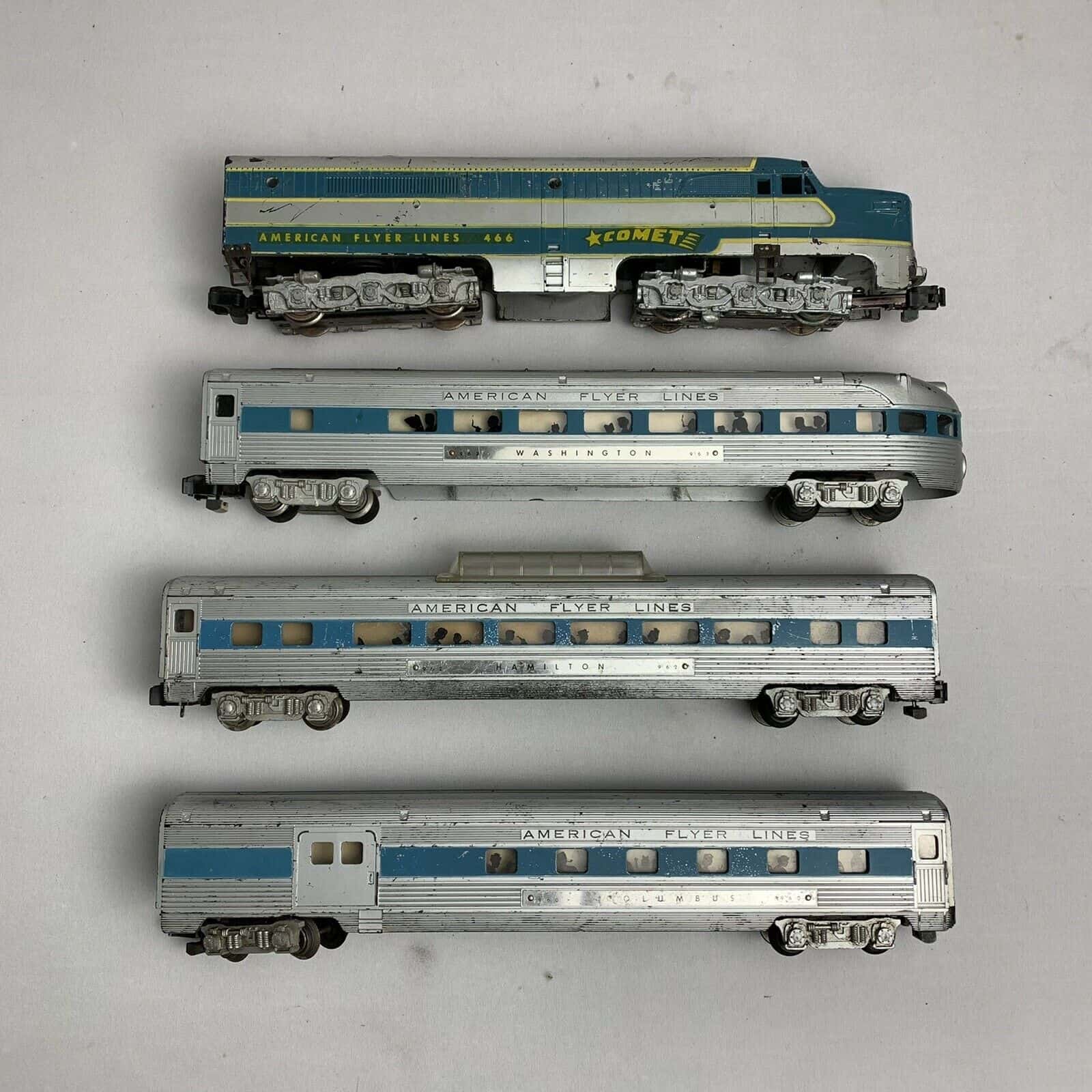 Initially, kids would get these toy trains as a gift for special occasions. So an iconic cultural image is the sight of toy trains tooting around the Christmas tree or winding its way around crinkly tinsel and unwrapped birthday presents. But if you have one, how do you look it up?

The hobby is vibrant enough that you can buy a reprinted manual, although they’re not cheap! If you do have a manual, check the road number on your model train. Pre-1957, they had 3-digit codes, but after that, they used 5 digits. That same number appears in catalogs. You can probably find the hardcover reprint of the official American Flyer Service Manual online. It’s fairly technical though, so Thomas Barker published a couple of companion volumes that have photos instead of drawings. The books explain maintenance shortcuts.

The most valuable American Train Flyers come in three sizes: S, O, and HO. S Gauge (1:64) is the most popular, with O (1:48) being larger and HO (1:87) being the smallest. All their trains bear the American Flyer mark, while some also have a Gilbert or Lionel marking.

When you’re starting out as a collectibles reseller, you’ll probably rush to eBay or YouTube to check out current pricing. And it’s easy to get over-excited. But remember, buyers don’t always agree to seller prices – you can tell by checking open bids. Rates are rarely accurate.

So instead of relying on hopeful asking prices and wishful thinking, go to the ‘sold’ tab on whatever platform you’re using. That way, you can see the exact date and dollar value of the most recent purchases. And these are verified sales, so they can gauge the market better. As you hunt down these treasures, history is important. American Flyer is a highly mobile brand. It changed hands several times. Its buyers (Gilbert, Lionel, Kughn, GM) were already in the train business. So you’ll find trains from these brands that aren’t American Flyers.

You may find a high-value train such as the Lionel Santa Fe 622 and buy it thinking it’s an American Flyer. Keep an eye out for that, because while these other brands can be equally valuable to collectors, you’ll lose the sale if the buyer is specifically searching for AF trains. 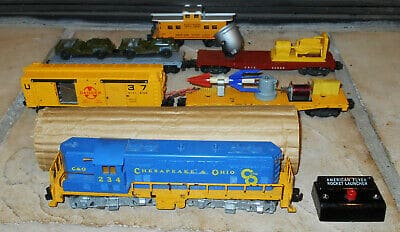 The tricky part of online sales is testing. If possible, find a listing with a video attached so you can be sure the train actually works. Or ask the seller if they’d be willing to do a live video call for confirmation. Once your American Flyer arrives, you should verify it before you resell it.

Of course, you can’t do that if the re-sale is for unopened boxes. But if it’s a shipment you can handle without lowering the value, assemble it and see if it runs. You may have to rewire it, and any cord will do. The transformer typically buzzes when you turn it on so don’t panic! 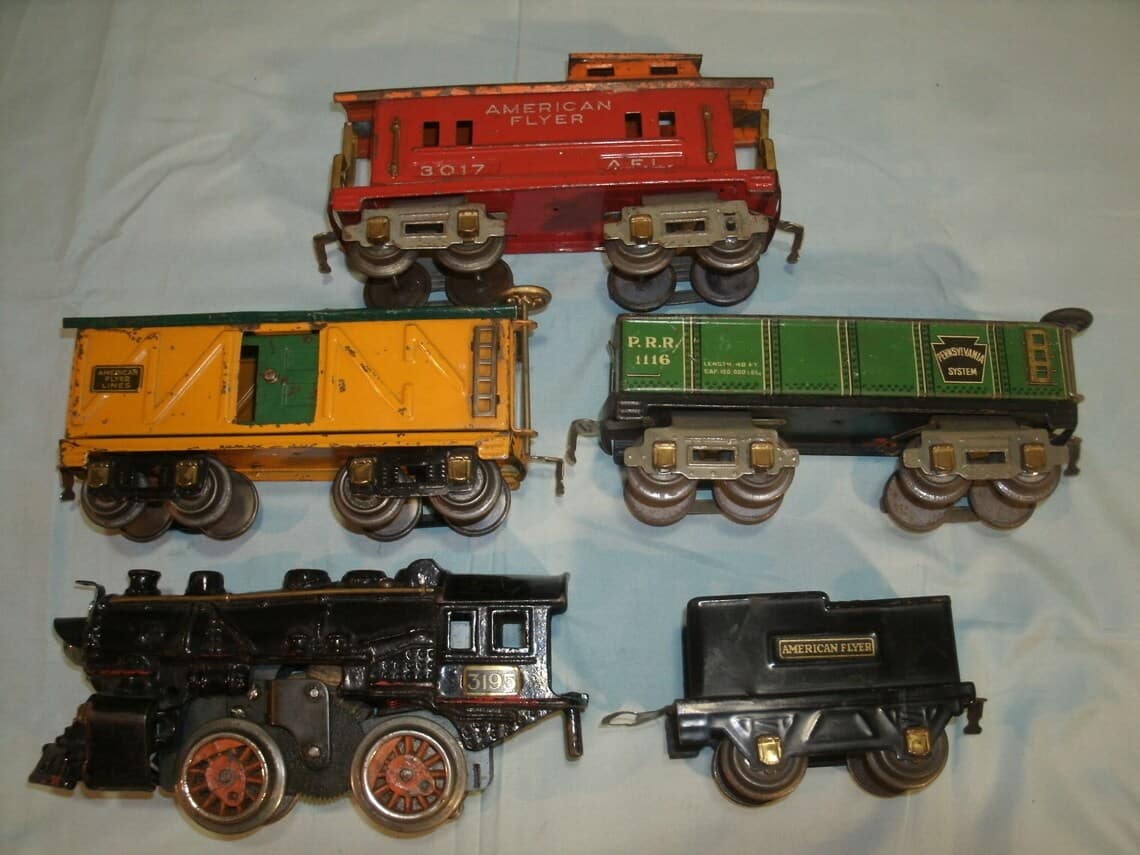 Older American Flyers have 3 gears – forward, reverse, and neutral. So if you turn on the train and it won’t move, flick the locking lever, then switch the gear by turning the power on and off again. Also, as soon as you take it out of the attic or the shipping box, oil your toy train!

You want a light to medium lubricant, so no motor oil or household oils (no, a dash of olive or coconut is not a smart move). Use an applicator needle to directly grease the nuts on the moving parts of the wheel. These include drive rods, shoulder screws, cylinders, and axles. 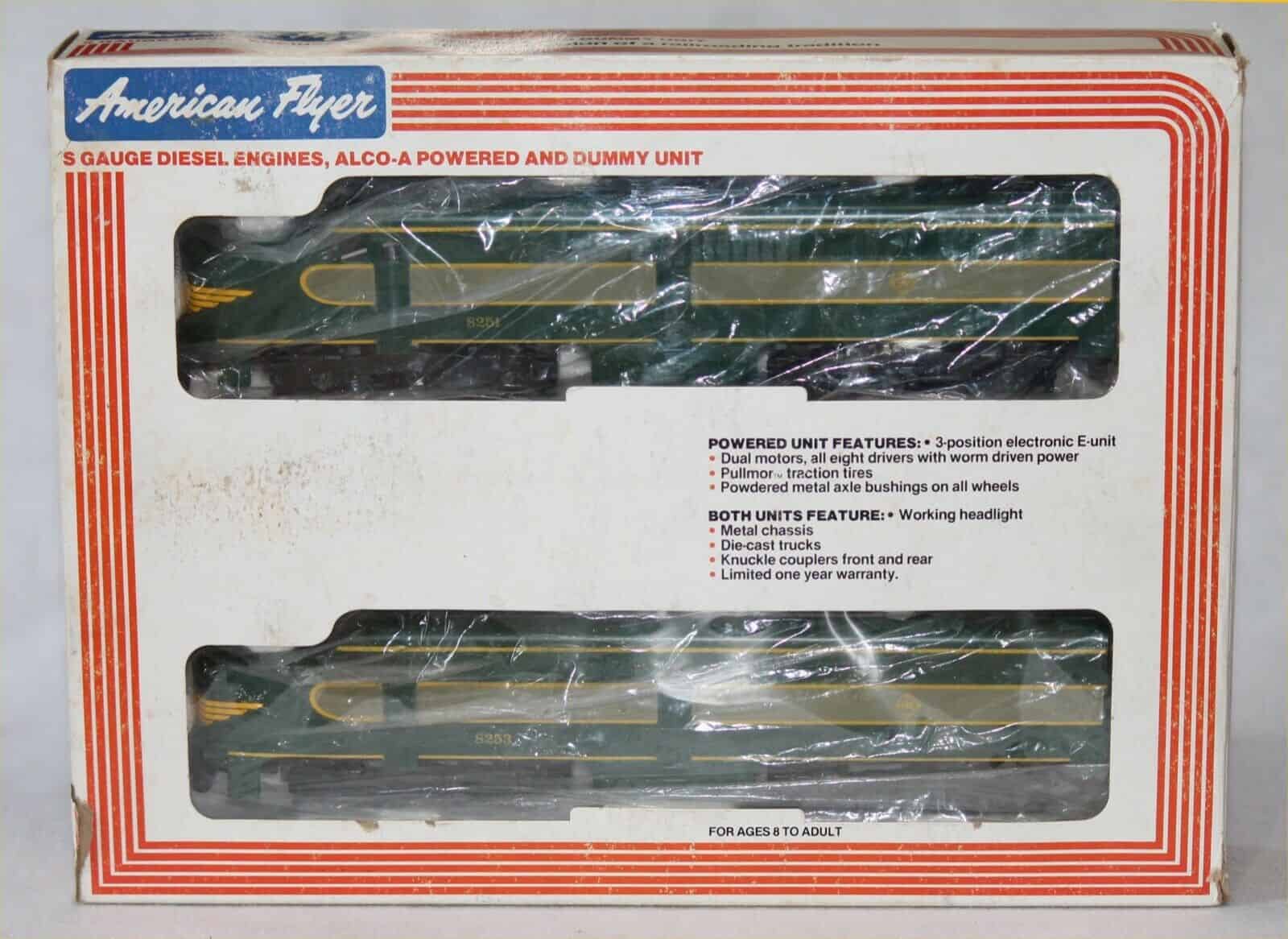 Maybe you found your American Flyer while clearing out your granddad’s things. And unless you’re a toy train expert, the wiring bit may intimidate you. Especially if you don’t have the manual. It’s fairly simple though, and you can find lots of detailed how-to videos online.

When you first unpack the train, you’ll see two wires. The originals were black and yellow, but most pieces are rewired so they may have different colors. The base wire is labeled. Connect it to the base terminal on your transformer. The other wire goes on the middle knob. The engines on all American Flyer trains are universal, so the model doesn’t necessarily make a difference. And the middle knob is generally marked 7-16V. You may find a third knob marked 16V for accessories. The track terminal easily clips under the railroad track.

The dial on the transformer controls the speed of your toy train. It goes from 0 to 100 and varies the amount of electricity coming into your train set. Higher settings mean a faster, louder train and a larger utility bill, so watch for that while you’re testing (or playing!).

15. Vintage American Flyer 20425 “The Keystone” Set in its Original Box 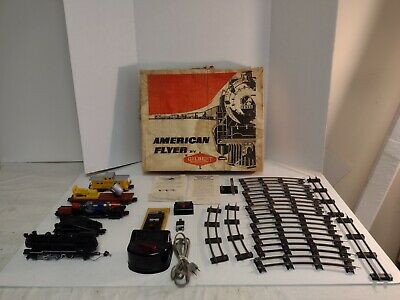 Ideally, you don’t want to buy an American Flyer that needs lots of repair work. Especially if you’re reselling. But it can be useful to do some basic maintenance to raise the bid value. If you spot any grease or gunk while lubricating, you can use a toothpick to gently scrape it off.

You’ll need to unscrew the engine cover to do this though, so watch a video first or you may ruin your latest find! Apply a fresh layer of gear grease then finish off by adding lube to the axles and bearings inside the engine compartment.  Don’t lose any of those little screws! 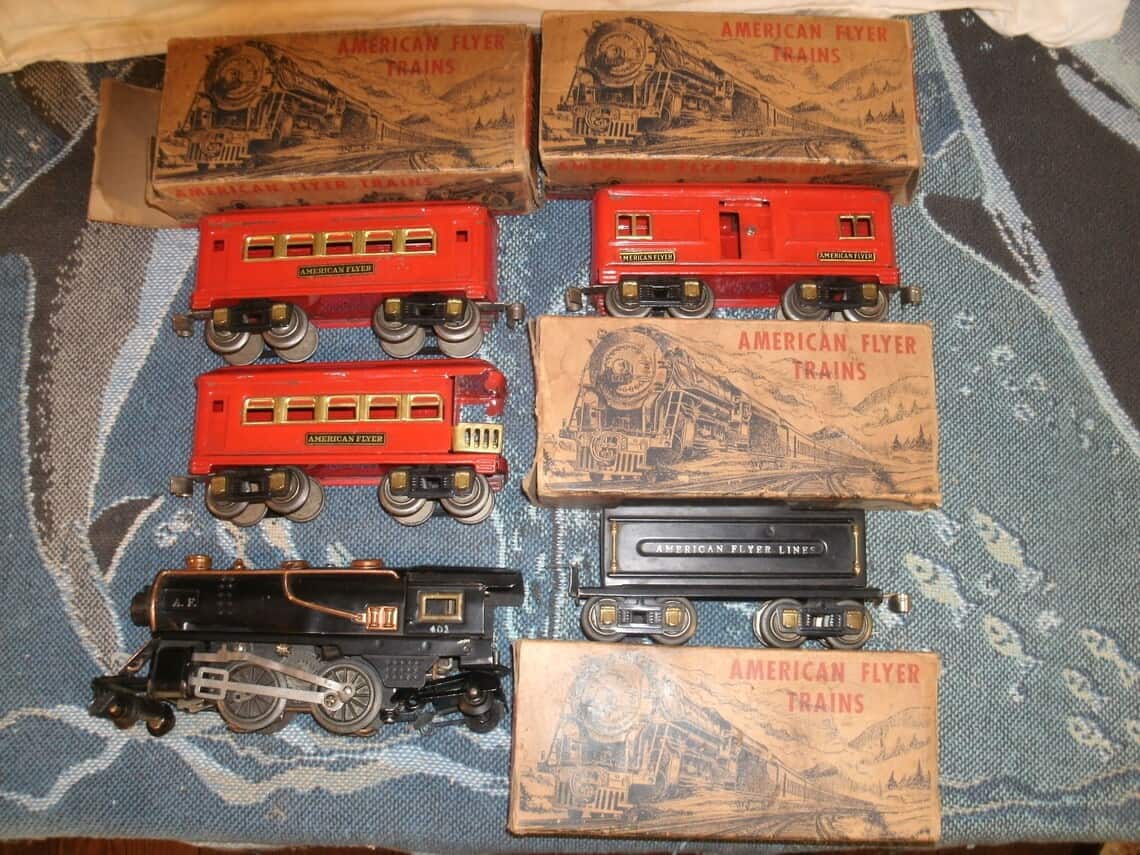 How well do you know your toy train parts? The drive rods are the horizontal shafts that make that famous choo-choo motion kids love. Tenders connect the cabins to the engine so there’s some cabling down there. When you lubricate the tenders, you need two kinds of oil.

The first type is the same light lube you used before. But the tenders also need a few drops of conductive oil for safety, since there’s a lot of electricity running through there. Trains have some smaller wheel axles under the pilot cabin (pilot truck) and the tenders (trailing truck).

Is there a special trick to oiling your model train bearings? Well, we already mentioned applicator needles. They let you put just enough lube without messing your tracks (or your workspace!) Remember, you want just a dash of oil – otherwise, it’ll soak your train tracks.

For the bearing itself, it’s best to do it while the engine cover is unscrewed. You get better access that way. Most American Flyers have a cotton wad or wick over the bearing, and you should saturate it. If not, the bearing will have a small hole where you can put a little lube. 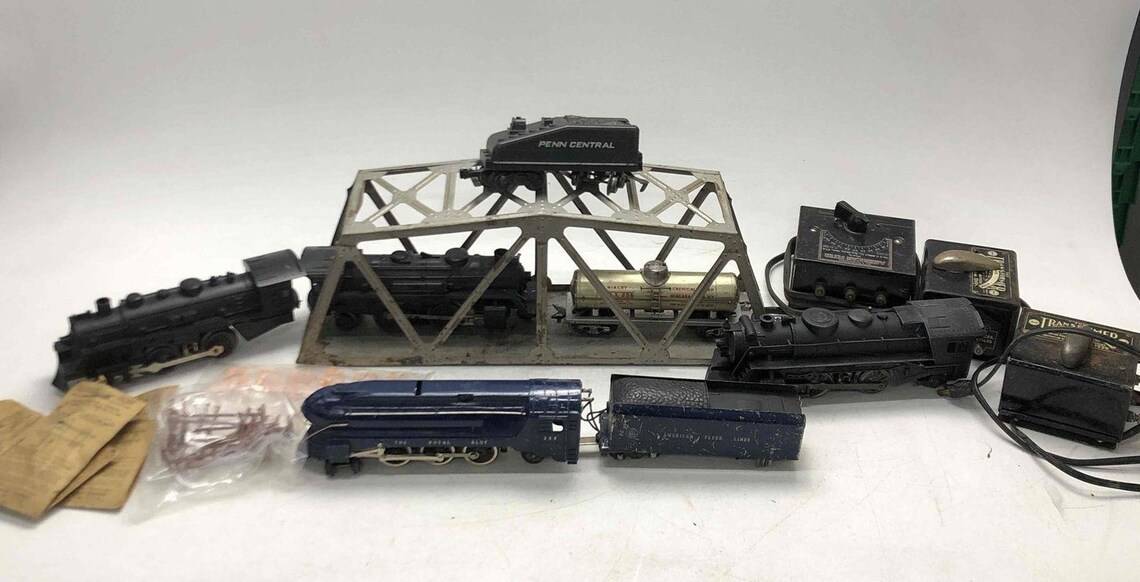 Here’s a quick technical tip from the train pros. Resellers often find American Flyers that have been tweaked and tinkered with over the years. Particularly for trains that were used (as opposed to display trains). So check the section where the truck chassis attaches to the body.

That’s the part that needs conductive oil. You can spot it by its copper content. The tender typically has two copper brushes flanked by four wheels – two in copper and two in steel. And the copper pairs should be on opposite sides of the truck bed to complete the circuit. 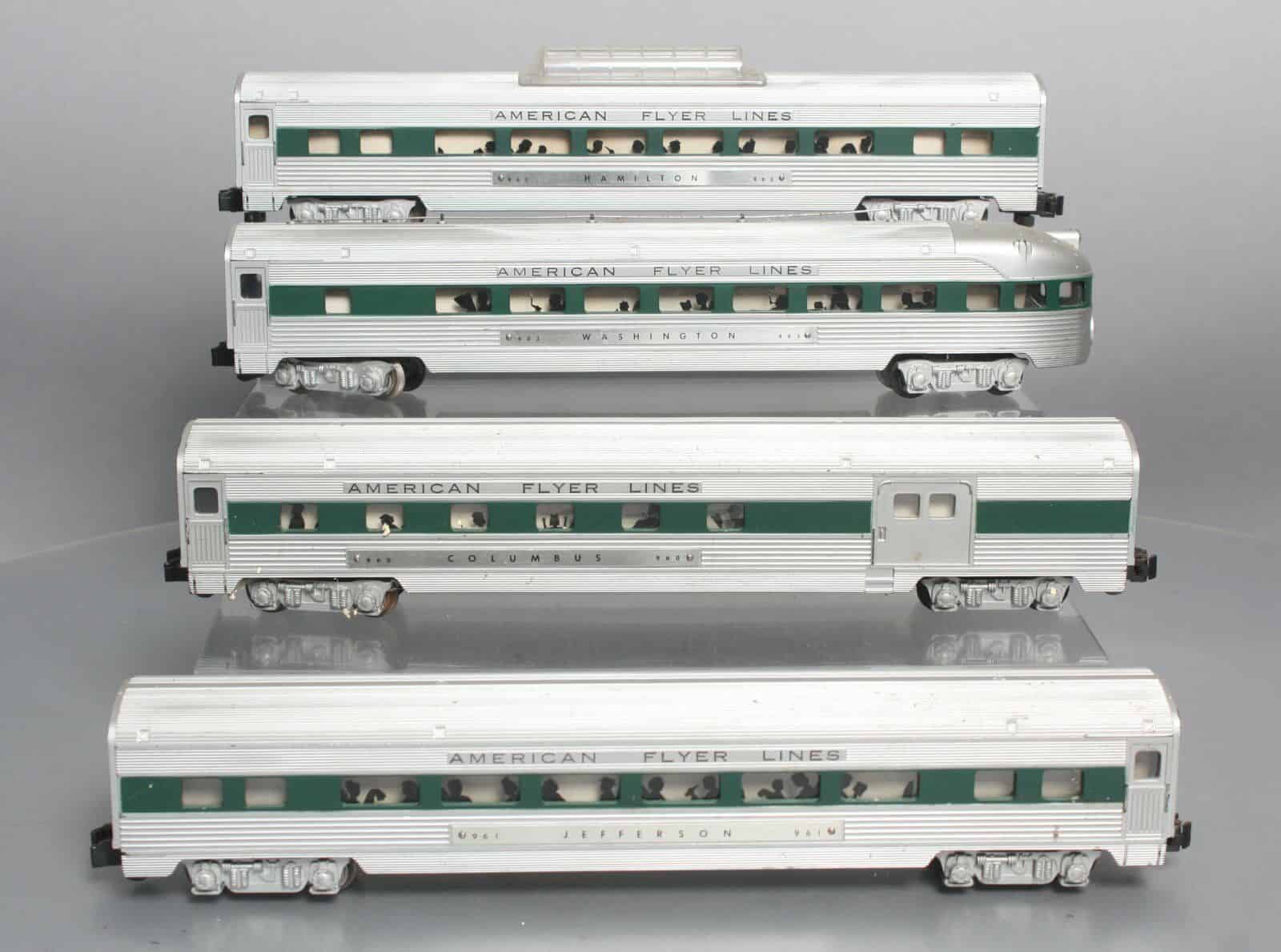 They might even have gone nuts and zig-zagged the copper wheels with one on each side of the disc. You want two copper wheels on one disc and two more on the opposite side of the other disc. So if they’ve been switched, you’ll need to correct it or risk shorting your outlets.

Do you have additional ideas on spotting the most valuable American Flyer trains? Tell us!