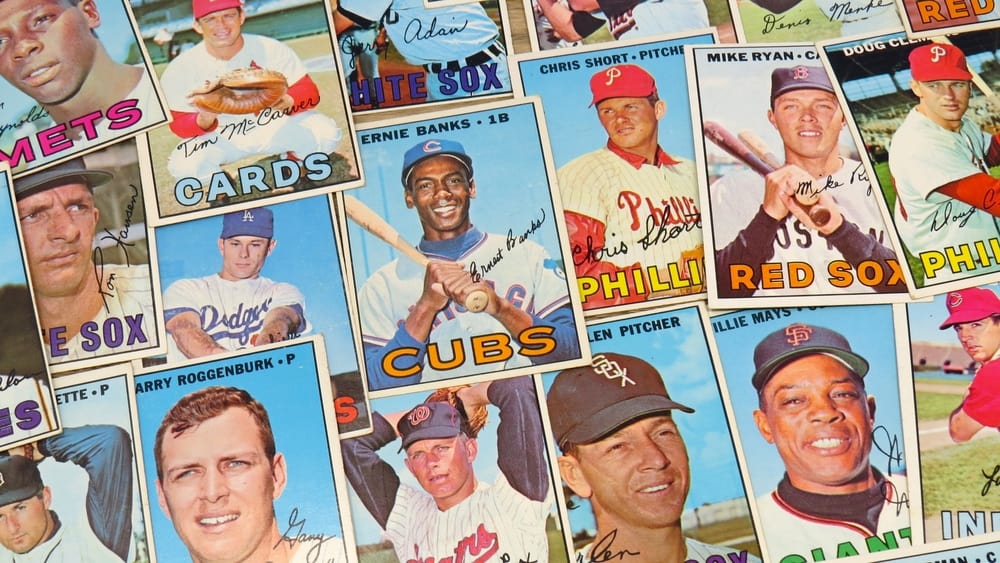 Did you know that baseball cards are now a multi-billion-dollar industry? Some cards are so rare they’ve fetched upwards of $6 million in a single auction.

From the priceless Wagner T206 to Babe Ruth, Mike Trout, and more, iconic baseball players are immortalized in collectible cards every year.

So open up your drawers, search your childhood bedroom, and empty your attic boxes – who knows, you could have a million-dollar baseball card hidden away?

Many different factors make a baseball card rare. Whether it’s the player, the art style, its limited production number, or if it’s signed, can all play some part.

But perhaps the biggest deciding factor is the card’s condition. Baseball cards use a system to grade their condition, from 1 to 10. Most if not all the highest-selling cards score between 8 and 10, suggesting they’re in very good or mint condition.

Below is a list of some of the world’s most valuable baseball cards. If you happen to have one of these, you’re in luck come auction time! 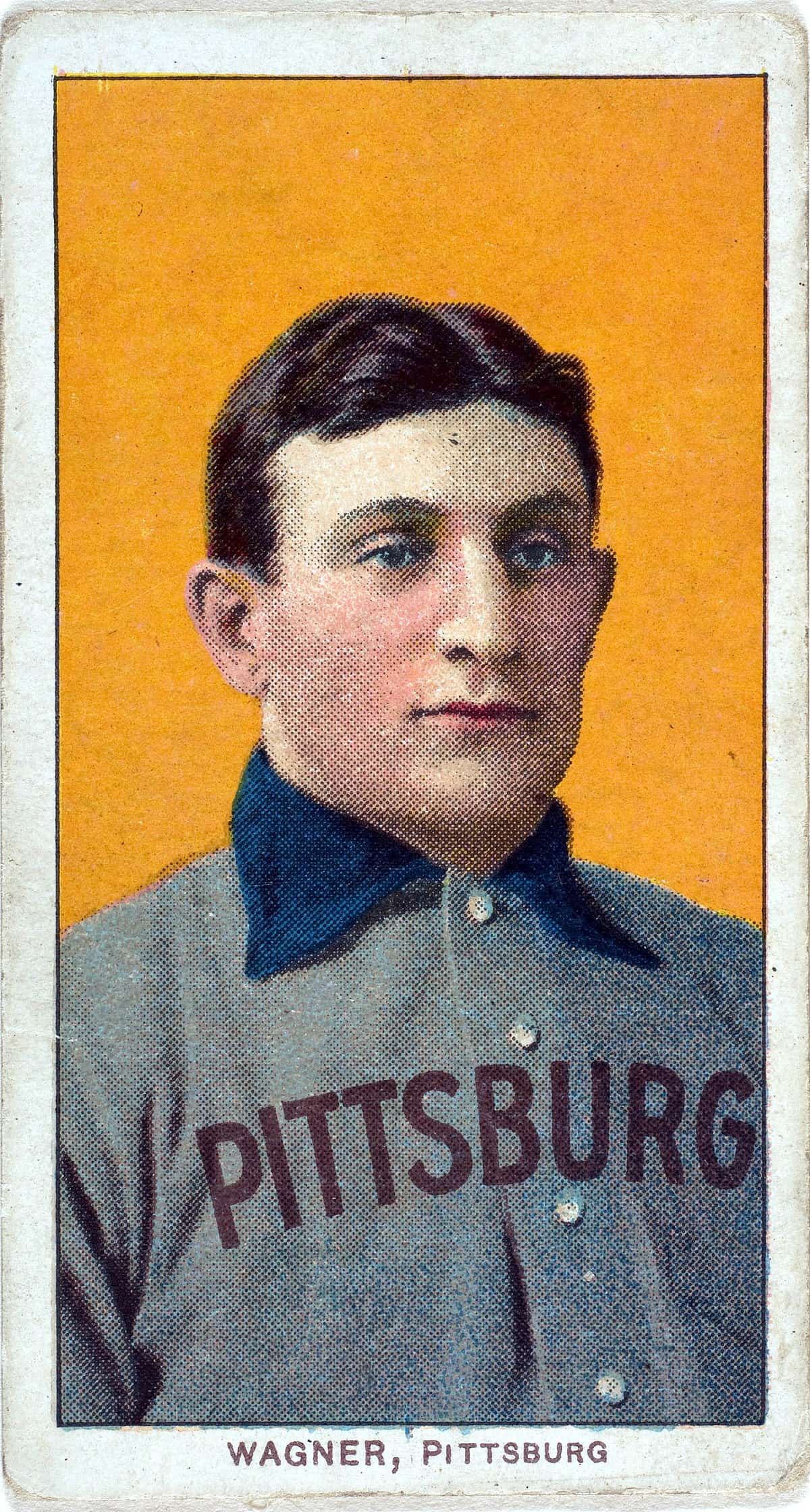 One of the world’s most famous baseball cards is Honus Wagner.

This card has broken world records countless times at auction, with the most recent sale in 2021 reaching up to $6 million.

Wagner is heralded as one of the most legendary players of all time. He was a member of the first team into the Baseball Hall of Fame in 1936.

The T206 card is rare because there are very few currently in circulation. It had a very limited release. Some collectors believe Wagner’s opposition to cards being sold with cigarettes, is the main reason so few exist today. 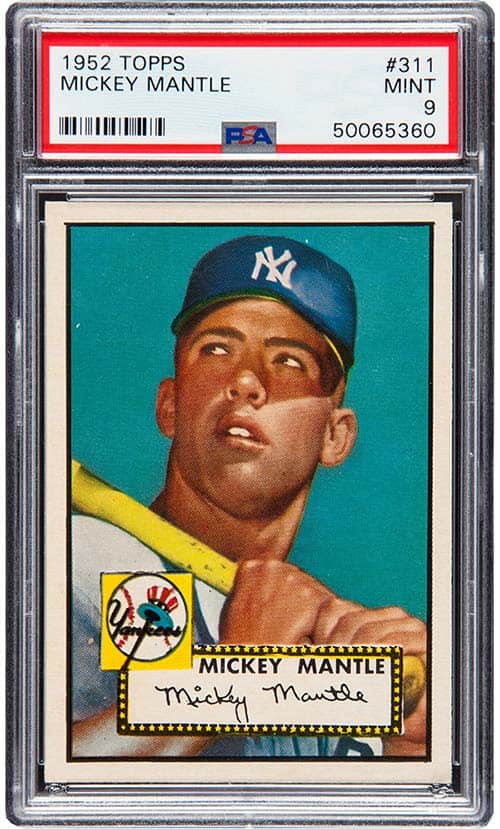 Nicknamed the ‘Mona Lisa’ of sports cards, the Mickey Mantle 1952 card is a bonafide gem. It had an incredibly limited production run, meaning that copies of the card are very hard to come by.

Mantle cards will always fetch a high price, regardless of their condition. But if you have a mint-condition card, it can sell for millions. In 2021, for .g. a 10-rated card sold for a staggering $5.2 million in a private auction.

Although Babe Ruth features in several collector cards, none can quite hold a flame to the 1993 Goudey Babe Ruth edition.

Originally sold alongside chewing gum, this card features an iconic batting pose by Ruth with a striking yellow background.

The card has increased tremendously in value over the years – in 2016 it sold for a respectable $200,000. But a rare Mint Condition card recently sold for as much as $4.2 million at auction.

Modern players and modern cards can also prove to be highly collectible. Take for instance Mike Trout of the Los Angeles Angels.

Despite still playing baseball, and being only 30 years old, Trout’s cards have broken all sorts of auction records – and he’s a player who is only going to increase in value over time.

With a shimmery gold background and signed by Trout himself, Trout’s rookie card sold for over $3.9 million in 2020. 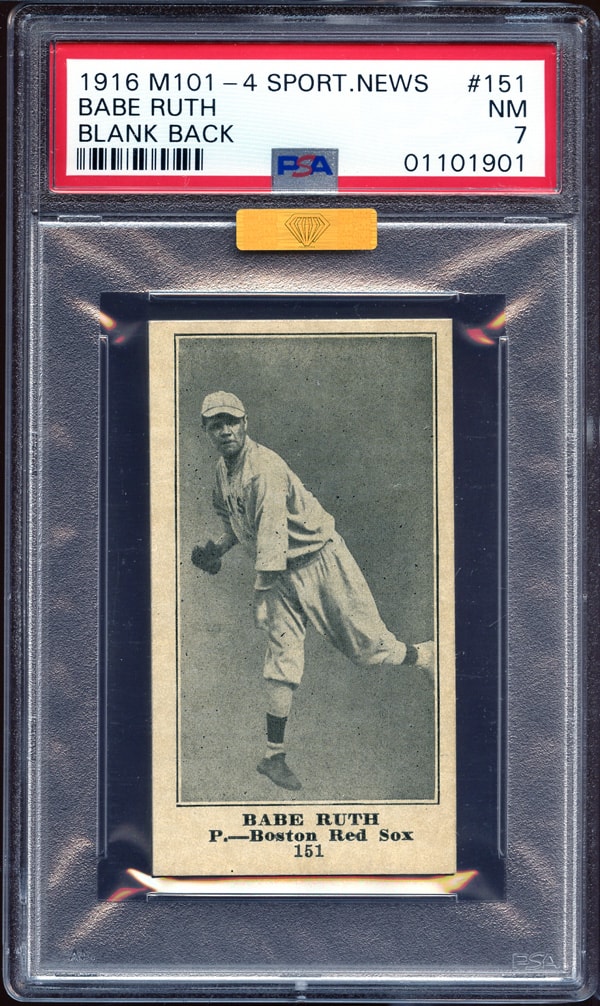 Babe Ruth is one of the most beloved players in baseball. His cards are no exception and can fetch crazy amounts of money.

A 1916 edition of Ruth sold for an incredible $2,400,000 at auction in 2021. The card showed Ruth in a Boston Red Sox uniform. Shortly afterward, he was traded to rivals the New York Yankees.

As a rookie card, the M101-4 shows Ruth as a small-time pitcher in the minor league. Instead of a colored illustration, the card features a black and white photograph. 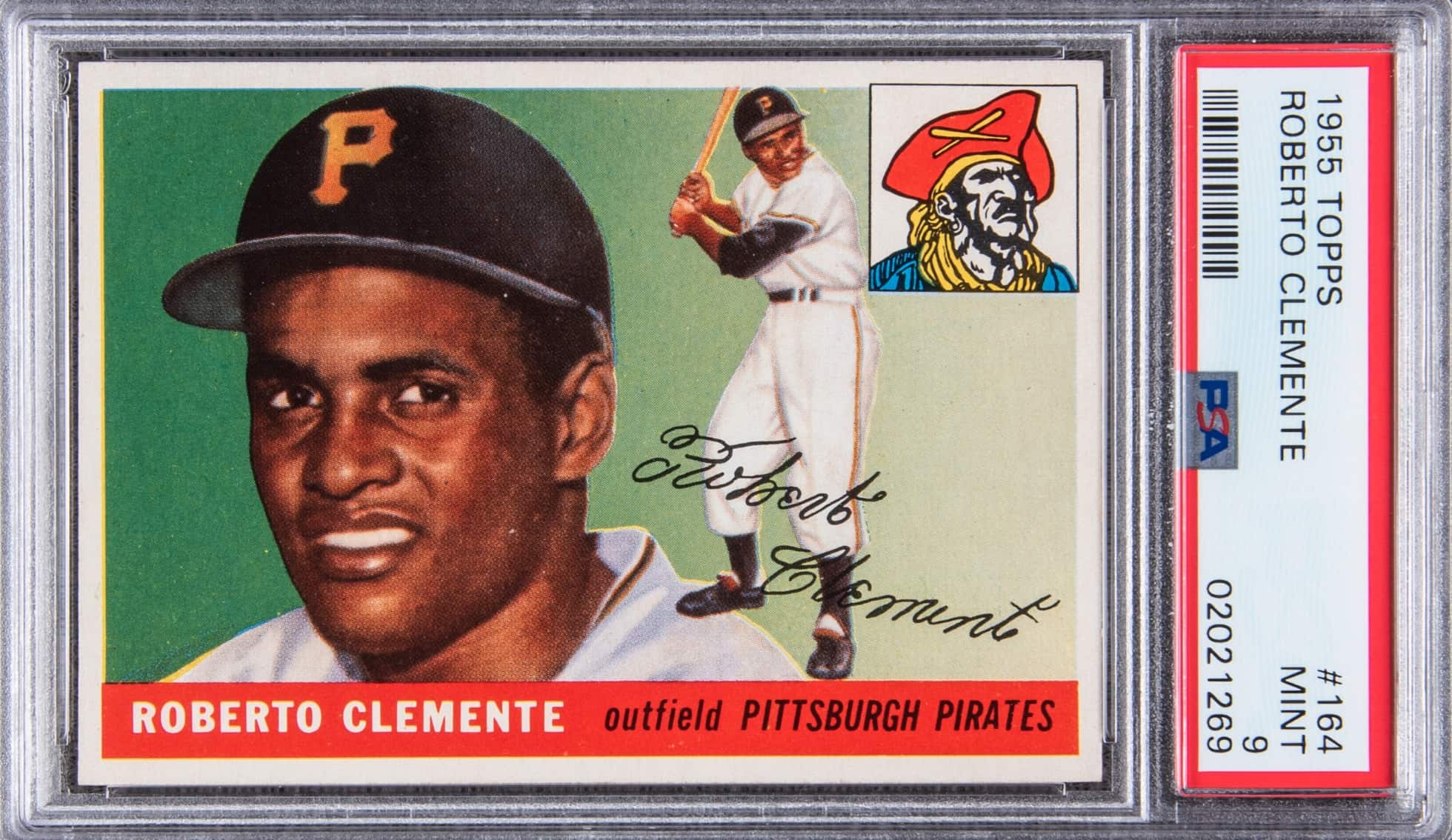 Featuring both the portrait and battle stance of the legendary Robert Clemente, this 1955 collector card raked in over $1 million at auction because of its subject and impeccable condition.

Originally the cards were not worth much money. It wasn’t until Clement’s sports career took flight that people began showing interest. But by that stage, not many cards were in circulation. The few cards which have survived today are now priceless.

This baseball card of Henry Lou Gehrig is one of the most popular cards on the market.

With a photograph of Gehrig used instead of an illustration, the card was part of a 128 set. The cards were only given out in arcades and amusement parks, meaning they are in very short supply. A good-conditioned card can easily sell for over $1 million in good condition, 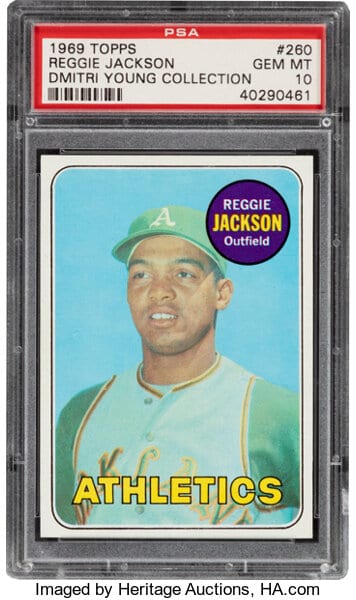 Ever since Reggie Jackson’s induction into the Hall of Fame in 1993, his baseball cards have soared in value.

One of the rarest cards you can own is the 1969 Topps card. A good-conditioned card sold for over $1 million at auction.

In 1947, Jackie Robinson made history as the first African American player in the Major League. And despite the picture being off-center (which usually devalues a baseball card), this Topps Jackie Robinson card only continues to soar in value.

With only 9 mint condition cards ever recorded, this card can fetch up to $984,000 at auction, and will only increase in value as time moves on.

Regarded as one of Joe Jackson’s first cards, and therefore his ‘rookie edition’, this card has a signature ‘tobacco’ style design from front to back.

Selling for up to $667,000, the card is one of the few instances to showcase ‘Shoeless Joe Jackson’ as a member of the Philadelphia Athletics.

Cards with mistakes or obvious errors are rarely valuable – but the T206 Joe Doyle is an exception.

Doyle is not that well-known a player, especially when compared to other legends on this list. However, his rookie card had a very obvious mistake printed on it.

The card mislabels the New York Highlanders as a National League Team. This mistake has transformed this otherwise generic card into a priceless collectible. It can sell for up to $550,000, though is very hard to find.

Featuring both Nolan Ryan and Jerry Koosman, the 1968 METS card is highly sought after by many baseball card collectors – if it’s in good condition.

One card sold for a whopping $500,000 at auction because it scored an unbelievable 10 rating from the GEM-MT authenticator. The card also documented both players at the start of their careers and is especially popular with Ryan and Koosman’s fanbases.

With a bold red background, the Cracker Jack TV Cobb is one of the most recognizable cards in baseball.

Whether it’s Ty Cobb’s fierce stare in the portrait or his tight grip on the bat, the card captures the serious nature of the player and also has some very distinct design features. A mint condition copy of the card went on sale for $432,000.

The 1933 Goudey Lou Gehrig card comes with two versions – both have a similar illustration, but different writing on the background.

Regardless of which version you own, a mint condition edition of Lou Gehrig’s 1933 card can net you up to $300,00 at auction.

Professional baseball player and cultural icon Joe DiMaggio always sells well with collectors. The 1939 edition is considered his rookie card and recognized as the most valuable on the market. If in good condition, it can sell for up to $218,578.

World war 2 delayed the cards of many professional baseball players. One such player was Warren Spahn. Unfortunately, cards from this period suffered from many printing defects, including poor centering.

However, the limited production and status as ‘rookie cards’ stood in their favor. A great conditioned Warren Spahn still sold for $192,000.

Little did Hank Aaron know that when he debuted back in 1954, he would also help create one of the rarest cards in baseball history.

The card has a signature clear, bold, and striking portrait of Aaron, which is highly sought after by his many fans. One card, in particular, scored a GEM-MT rating of 10. It’s thought to be one of the best-conditioned cards in collector history, selling for over $170,000 at auction. The 1954 set proves to be one of the most popular in baseball card collecting, as it marked the start of many illustrious careers. One such career was Ernie Banks.

This card is well designed, well-centered, and has a white background which prevented noticeable printing mistakes. Ernie looks incredibly young in his headshot, too. The card sold for $142,000 in 2012 and will have increased in value since then. Every year, the 1909 Walter Ramly Johnson card increases in value. With gold embossed borders and a black and white photograph, it has a signature look that sets it apart from many other cards of the time.

A card in good condition can easily fetch up to $130,000, though beware – there are many restored and repaired cards on the market.

While there are a few editions of Willie Mays, his rookie card is easily the most popular.

The card has a strong, detailed portrait of Mays. The picture is also at the center of the card, a common feature of a good design.

Very few rookie cards survive in good condition. Back in 2007, this card held the record for the highest sale at auction at an impressive $93,412. We reckon it will sell even more nowadays.

Despite being banned from baseball, this rookie card of Pete Rose is an iconic piece of baseball history. Although the card often has print defects and poor centering by today’s standards, it has a unique design and striking colors that set it apart from others. The card sold for $87,330 in 2021.

With a signature brown background, the 1907-1912 baseball sets attract a lot of attention from collectors. They often included the player’s name, home team, and league, making them double as antiques of the sport.

Arguably one of the most popular from this set is Irving Lewis. There are two versions of him, with and without an emblem on his sleeves. A good conditioned card is known to sell for upwards of $70,000.

A lot is going on in this card – with a clear, distinct face portrait and action pose printed together. Sadly, neither are very well executed.

Despite its visual flaws, it’s a popular collectible for fans of the Brooklyn Dodgers.  And although the card is much more common than Koufax’s baseball peers, it can still sell for up to $41,973.

With a bold and crisp portrait of the legendary Eddie Plank, this card was heralded once as one of the top three most valuable cards in baseball for many years. Dating as far back as 1909, though its popularity has wavered slightly, it can still fetch a high price of $41,475 if in good condition. Despite being released one year earlier than the 1952 Mickey Mantle, this version isn’t as popular or well regarded. It suffers from print lines and wax stains and centering of the image.

That said, it’s still a prized possession for many baseball fans, and can still sell for upwards of $18,000 at auction.

The 1976 set never caught the imagination or attention of fans quite like other sets. They suffered from common design flaws like bad centering and print defects. Still, a well-conditioned card can fetch upwards of $11,718

Inducted into the Hall of Fame in 1969, Stan ‘the Man’ Musial has two rookie cards that attract considerable attention from collectors. The leaf edition in 1948 is arguably the most valuable, and whilst a mint condition can sell for a small fortune, cards typically amount to $3,600 at auction.

With distinct pastel colors and a signature pose, this 1909 Christy Mathewson card is stately and very desirable for antique baseball card collectors. As with all early baseball cards, a checklist of cards is located on the back. It recently sold at auction for $2,400. 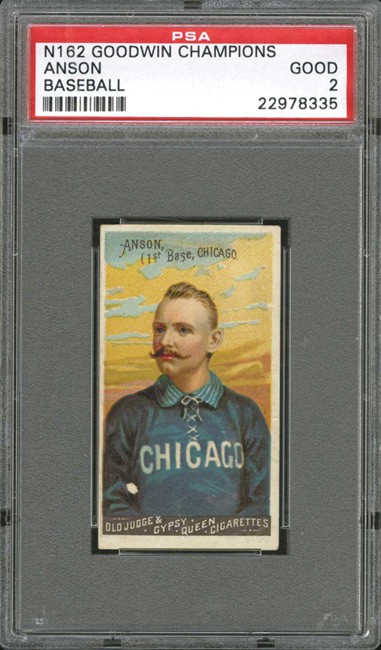 Featuring the most popular player of the 19th century, Cap Anson, this highly-collectible antique card still fetches a reasonable sum at auction.

The reason perhaps why it’s not more valuable is because there is a surprising number still in circulation. The back of the cards had checklists where owners could see what other cards in the set there were. It can still fetch up to $2,160 at auction.