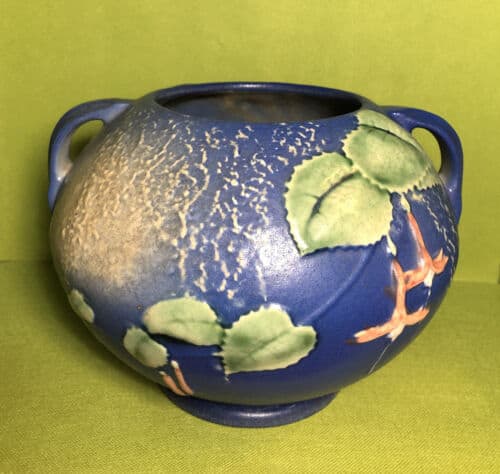 The colorful, richly-patterned ceramics of the Roseville Pottery Company haven’t been in production since the early-1950s, but today some of the most sought-after and desirable pieces from Roseville fetch staggering prices at auction. In fact, back in 1999, a vase from the Della Lobia collection of Roseville ceramics sold for $38,850, at an auction for pottery lover’s held annually in the hometown of the original Roseville company.

In the drab, bureaucratic grayness and glass of today’s architectural and stylistic world, it’s no wonder that such vibrant and inventive works of art should be considered some of the most attractive and lucrative antique collectibles on the antique market. Unfortunately, however, it’s not always easy to tell the genuine articles from the fakes.

People around the world have grown especially good at producing realistic-looking fakes which even experts can have trouble identifying. As such, the market is not always easy to navigate, and especially not for someone new to Roseville and/or antique ceramics.

That’s exactly why we put this essential reference guide to Roseville pottery together. Here, we’ll walk you through the history and context of the Roseville Pottery Company. You’ll then find our sweeping guide to determining authenticity in the pottery, before finally we take a look at our buyer’s and standard price guide: presenting the most up-to-date and accurate information on real-world prices for Roseville pottery at auction and elsewhere.

The History of Roseville Pottery

The Roseville Pottery Company would in its heyday become the most popular manufacturer of Arts & Crafts-inspired pottery in America, but its roots were far more humble. Founded in 1890 by J. F. Weaver, the company ran out of Roseville, Ohio (hence the name).

Soon, however, the company began to grow in popularity, and make enough money to start looking for bigger, better premises.

The Move to Zanesville, and Competition

From 1895-98, during which time George Young assumed majority control of the company, Roseville purchased two other large-size pottery manufacturers: Midland Pottery in 1895, and in 1898 the Clark Stoneware Company, whose headquarters they moved into in Zanesville, Ohio.

The Roseville Pottery Company would produce out of Zanesville, Ohio until its closure in 1954. There, they began to expand their catalogue in order to compete with their fiercest pottery-producing competitors, namely: Rookwood Pottery and Weller Pottery – two other Ohio-based pottery studios.

Throughout the early 20th century, Roseville patterns on dishes, jardinieres, planters and other fine examples of pottery, became so beloved that the company did very well for itself.

It was a movement promoting the innate value and beauty of folk-crafts, traditional craftsmanship, and DIY home decoration and creation, at the same time as it pushed back against the Industrial Revolution. The world of Roseville Pottery came to encapsulate many of these feelings and styles.

From the earliest Rozane line (which was a contraction of “Roseville” and “Zanesville”) to the later Art Deco-inspired lines, the brilliance of Roseville pottery lay in its designers’ abilities to capture the folksy heart of the American people with nature-inspired designs and palettes, complimented by exquisite quality of craftsmanship and artisanal feel to each individual piece.

Closure and Revival in the Modern World

As with many popular American antiques, the 1950s were the death of Roseville. Mass production and increasing use of plastics in the home put the costlier ceramics company under pressure until, in 1954, they closed their factory doors for the last time.

Since then, Roseville pottery has become something of a rarity, and all the more valuable for it. The style has seen a significant revival in popularity at least twice. Once in the 1970s with the Baby Boomer generation, and once in the 1990s and early-2000s during the Mission Style revival. Today, in the 2020s, it would appear that Roseville antiques are on the rise again.

How to tell genuine Roseville pottery from fake Roseville reproductions

Unfortunately, the reproduction of Roseville pottery pieces is a booming industry for fraudsters, and it’s not quite as simple to detect fakes from genuine articles as it can be with other antiques.

Thankfully, there are things to look out for which might act as reproduction alerts, and stop you from buying something poorly made and with no real vintage value.

The first thing everyone knows to look for when valuing and assessing the authenticity of antiques is the maker’s mark. As such, it’s also a good place to start when it comes to Roseville pottery ceramics and stoneware.

However, we run into a slight problem straight away. Roseville didn’t use any one particular hallmark or stamp, but rather employed a wide variety of different ones over the course of their production years. What’s more, the earliest (and therefore often the most valuable) Roseville ceramics were sometimes not hallmarked at all.

If you find the above in raised reliefs, usually on the bottom of the piece, then there’s a good chance it is genuine. If, on the other hand, you find them impressed, rather than in relief, or if you find “Roseville” rather than “Roseville U.S.A.” stamped on the piece, you can almost always discount it as a fake.

It’s important to remember that Roseville ceramics haven’t been produced in almost 70 years. As such, any genuine Roseville item is almost certainly going to show signs of at least minor wear. If the piece your valuing appears to be in flawless mint condition, it’s worth asking yourself whether it might not be newer than it’s being advertised to be.

The quality of the original glaze of antique, genuine Roseville pottery pieces is unmistakable. On the contrary, the glaze on Roseville repro’s tends to be noticeably duller and “flat” looking: two-dimensional rather than revealing the depth of color and detail beneath, as would the genuine articles.

The colors used to make Roseville fakes are often inconsistent with the actual colors used back in the day. The following colors are generally good indicators that the piece you are examining might be fake:

Similarly, the colors will likely be less vibrant and rich in fakes when compared to those used in the production of originals.

The detail work of fake Roseville pottery pieces is generally shoddy and less-impressive than the originals, which were all made to highly-exacting standards. The handles of fake Roseville pieces tend to be chunkier and less well-defined, as well.

How much is Roseville pottery worth?

Clearing out the attic and find an old Roseville vase? Well, depending upon the condition and rarity of the piece, you might have just stumbled upon a treasure worth upwards of $2-3,000. Of course, that’s if you’re really lucky.

All the same, even more common Roseville antiques can be worth several hundred dollars, so it’s worth knowing what to look for when valuing Roseville pottery for sale or purchase.

The following is a chronological list of Roseville styles and pieces, including few examples of prominent pieces and their worth according to contemporary price listings:

Naturally, in addition to the rarity and desirability of different styles and pieces, the quality of Roseville pottery also plays an important part in its value. The length of hairlines and cracks, as well as any chips to the piece will naturally devalue it somewhat.

For the most accurate appraisal of your antiques, we recommend you get thorough condition reports for each based on color photographs of originals and detailed descriptions of the pieces.

Where to buy and sell Roseville pottery

The most trustworthy places to buy and sell genuine Roseville pottery antiques are at antique markets, on eBay, and in local antique shops. You can also find genuine Roseville pieces on the Michiana Antique Mall website, as well as on the Arts & Crafts Antique Gallery website.

Roseville pottery remains intensely popular and valuable, and for good reason: the sheer quality and uniqueness of the designs and individual productions set them amongst some of the most attractive and well-made ceramics of the 20th century. Always remember to check for signs of authenticity before buying or selling, and value your pieces based on the number-coded system of valuation according to the style and desirability of the piece.