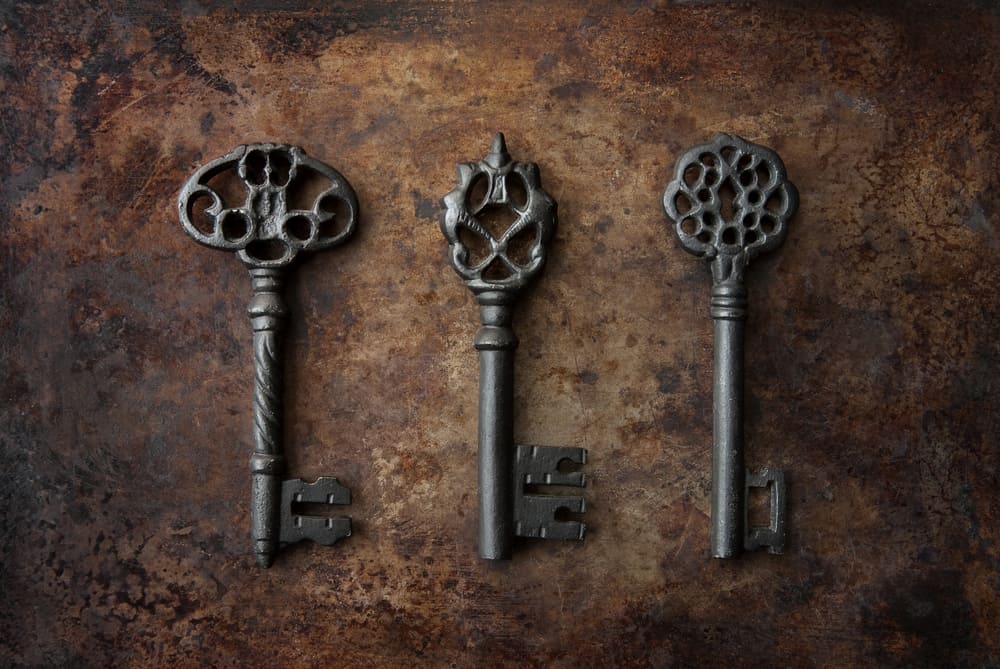 Skeleton keys have long been used to open doors, drawers, chests, and other locks. If you haven’t seen one in person, you’ve probably seen these mysterious keys in a movie or TV series. Curious to learn more?

Skeleton keys are a type of key that has been filed down to its most basic form. This allows them to open various locks. These keys have been around for thousands of years, and those that are still found today are mostly made of brass or iron. Most skeleton keys aren’t worth much unless they have an elaborate bow or are related to a specific period or movement.

Let’s dive into the history, value, and design of antique skeleton keys.

1. The History of Skeleton Keys

Keys have been around since 4000 BC. They were initially made of wood, very heavy, and easily broken. By the year 900, locks were created from metal combined with new metal keys.

A key can open a locking mechanism on chests, doors, drawers, and other pieces of furniture. It didn’t take long for people to realize that having many keys together wasn’t as convenient as having a master key, or one that opens all – thus, the idea of skeleton keys was born.

Skeleton keys are keys that have had the serrated edge filed away, leaving them at their most basic form. This leaves a cylindrical key bow with one or two rectangular teeth.

By leaving the “skeleton” of the original key, you’re left with a key that can open more than one lock, including warded locks and lever locks. More modern skeleton keys might even be designed to fit many locks from the get-go, avoiding the need to file them down.

Most antique skeleton keys are from the early 20th century. They may also be referred to as master keys or pass keys.

People look for antique skeleton keys for two reasons: to open an antique piece of furniture that has been locked or to collect them. Regarding the latter, many antique skeleton keys have dark or intricate designs and are made of strong metals. These are valued higher and have a mysterious air about them that attracts collectors across the globe. 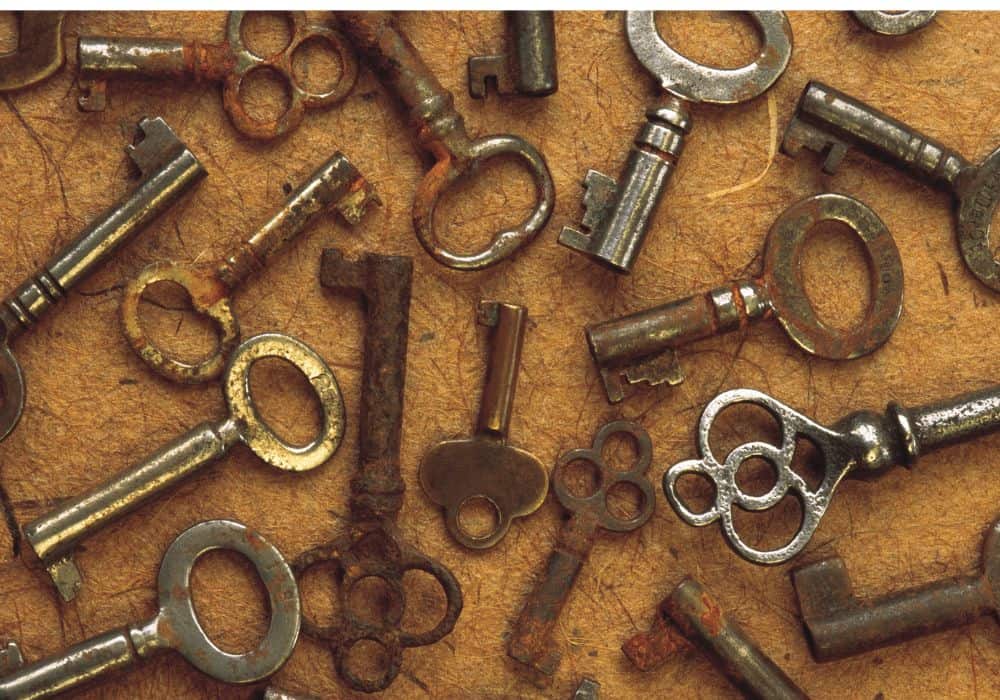 Many early skeleton keys were created by artisan welders who worked on locks. Some of the most expensive antique skeleton keys will come from unknown sources.

From the late 1800s into the turn of the century, however, some manufacturers began mass producing their own skeleton keys.

Sargent and Company was started by Joseph Sargent and his two brothers in New York City in the mid-1800s. Beginning as a hardware company, they focused highly on locks and door-related mechanisms. You can still find some of their old skeleton keys in auction markets and antique stores today.

The Russel & Erwin Manufacturing Company began making padlocks and door hardware in 1839. Over the years it was bought out and merged with other companies various times, forming the American Hardware Association, Russwin, a part of Black and Decker, and, most currently, being acquired by Assa Abloy AB.

While they don’t make skeleton keys any longer, you may find some of their antique keys from the early or mid-1900s.

Corbin Russwin was a later version of the Russel & Erwin company. They still produce locks and hardware, including keys, and are owned by Assa Abloy AB. 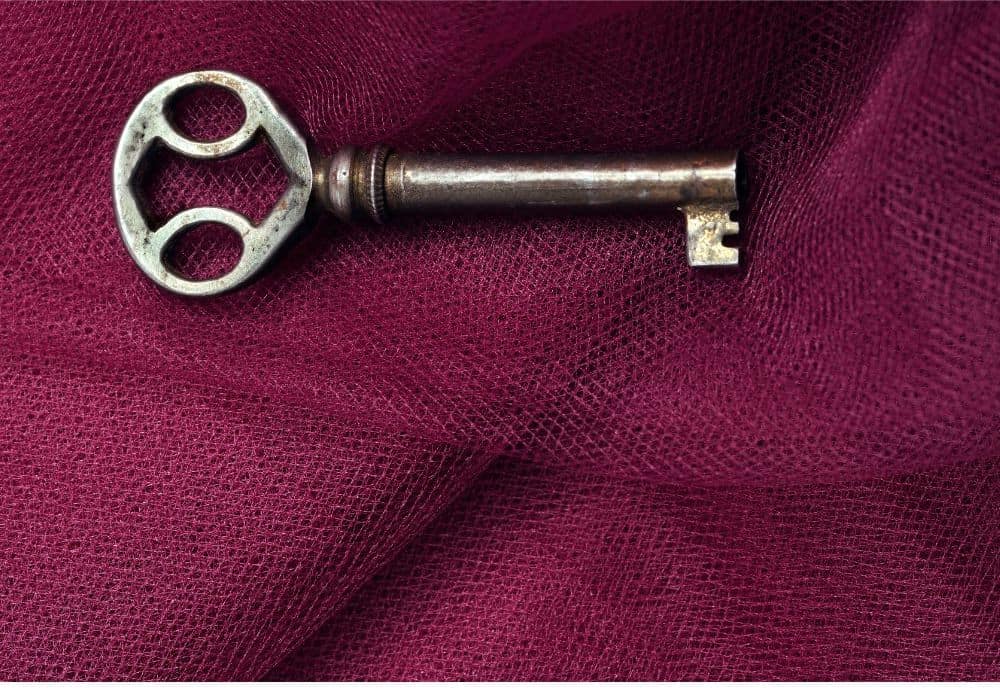 Antique skeleton keys can be anywhere from 200 to 90 years old, although most are from the 1940s.

To identify a skeleton key, you’ll need to look at its design, material, size, and key bow.

Skeleton keys come in all shapes, sizes, and designs. The design could consist of engravings in the form of words, letters, the manufacturer’s name, numbers, or even some sort of image.

Since one key can’t open all of the locks in the world, there were different kinds of designs for different types of locks.

Some antique car keys, such as those by Ford, may also resemble skeleton keys, but they will have additional teeth and are likely made of different metals.

You’ll find a lot of keys with rust on them, but this isn’t a sign of an antique – many metals are prone to rust after just a few short years.

To find out what kind of metal your key is made from, hold it next to a magnet. If it sticks, it’s likely steel or iron. If not, it may be stainless steel or brass.

Antique skeleton keys can be as small as ½ an inch long to 5 inches long.

The smallest ones could be used to lock a diary or journal, small decorative box, or jewelry box. Keys that are between 2 and 3 inches long were usually used for cabinets and drawers within a desk or office.

Medium-size keys up to 4 inches long could open antique doorknobs, while large keys were reserved for gates, entrances, and other large pieces.

The skeleton key’s bow is the rounded end we hold on to when unlocking something. The most basic skeleton keys have simple rounded ends, but the most expensive ones have ornate bows that are engraved or stamped.

Some can have a special shape, while others may be round with a unique design. Check out some of the most expensive antique skeleton keys that were sold and notice the craftsmanship of their bows.

4. How Do You Date an Antique Skeleton Key? 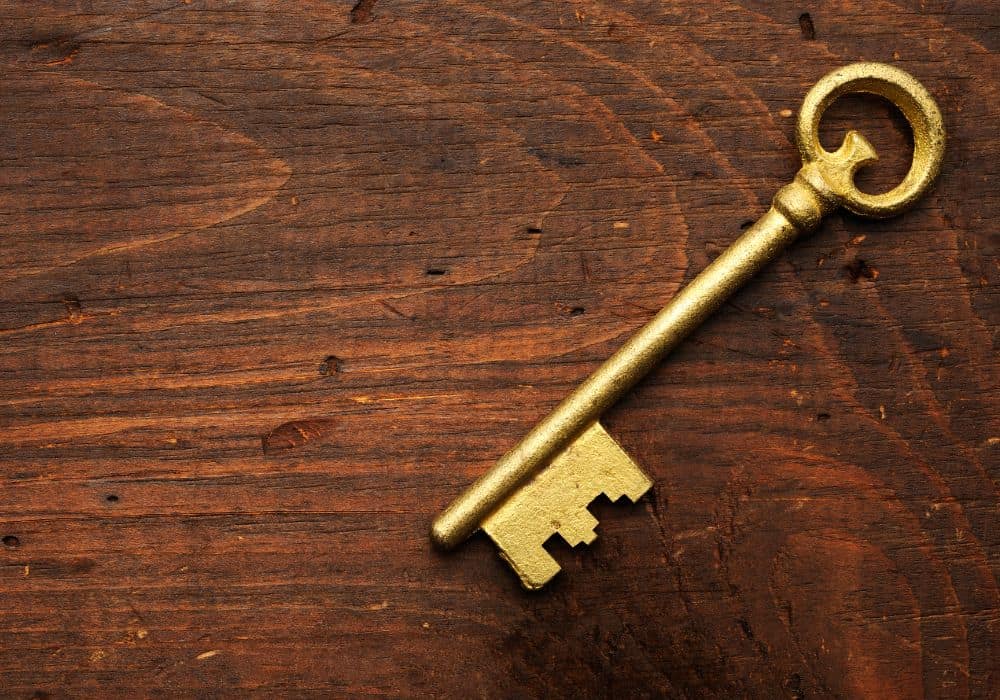 Very few skeleton keys will be stamped with their manufacturing date. Otherwise, it is up to you to date the key, which can prove to be difficult. Elaborate procedures, like carbon dating tests, can date keys, but this is not accessible to the everyday antique collector.

Most skeleton keys were made between the late 1800s and 1940s. If the key seems to be welded by hand and shows a lack of perfect uniformity, this may attest to its old age.

Certain engravings or stamped trademarks can come from a specific period, so research any unique markings on your key.

Most antique skeleton keys aren’t worth much. You can find plenty for sale online or in person for less than $10. Some vendors even sell boxes of them for very cheap prices.

Certain skeleton keys, however, could be worth hundreds of dollars. These usually have engraved or especially made bows or are connected to an important era or movement. Most of these unique and valuable antique skeleton keys come from France.

For example, a vintage French skeleton key from the 1950s had an engraved face on the bow and sold for $550 on 1stDibs.com.

Another Parisian skeleton key made of brass had a bow in the shape of a bird. It was from the 1890s and sold for $139.

6. How to Get Antique Skeleton Keys 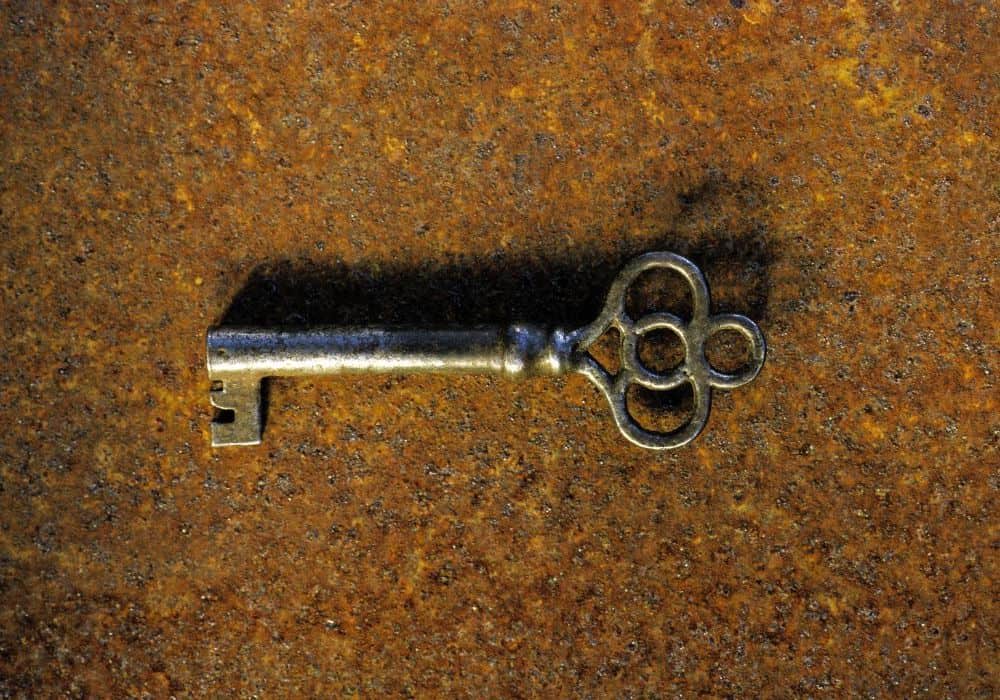 You can also buy them to try and unlock interior doors or antique drawers. They’re sure to an air of mystery anywhere they’re put!

Skeleton keys have a long history and are seen as antiques. Some people also buy them to try and unlock old pieces of antique furniture.

These keys can be made of brass, steel, or iron and – in their heyday – were able to open multiple locks with just one click.

While most aren’t highly valued, these precious pieces of history can add to the décor of any home or your antique collection!