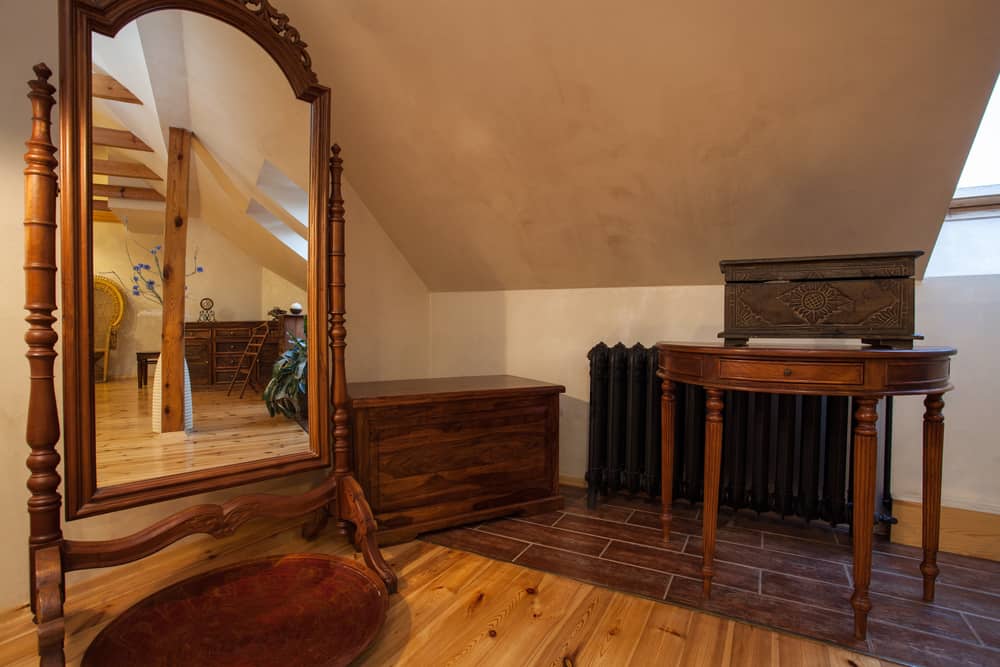 People have long been curious about and fascinated by mirrors as objects. It may be a fairly common item in every house today, but it wasn’t always like that.

Over time, mirrors have suffered several changes and mutations. They have always been priceless and cherished items.

That has made them the object of true works of art in all the centuries. There are different types of antique mirrors, as well as styles.

If you are considering starting to collect them, you should know a lot about their history and styles to truly appreciate them and make good investments. They are highly prized items in the world of collecting.

In this article, we will give you a complete guide to antique mirrors and try to cover the basics so that you can live up to these complex but charming objects that do not lose their charm over the years.

Mirrors are objects with polished surfaces that allow light to pass through them, thereby reflecting objects. It’s believed that polished stones such as obsidian were used in prehistoric times to make the earliest mirrors.

Hand mirrors made of bronze and other metals have been discovered in Mesopotamia, Egypt, and China, where some specimens were notable for etched ornaments on the back. For centuries, they were considered luxury items that only the wealthy could own.

In classical antiquity and the Middle Ages, metal was the preferred material for making mirrors.

Mirrors had to be polished regularly because metals tarnish quickly. They were probably used to apply cosmetics, groom hair, and adorn oneself.

At least since the third century AD glass has been used to make mirrors, which are then covered with lead or gold leaf.

These early models were flimsy and tended to distort the viewer’s reflection. For this reason, metal mirrors have been used for a long time.

The Islamic kingdoms began making glass mirrors, called taifa mirrors, in the eleventh century, along with other decorative items made of tinted glass.

During the Renaissance, glass mirrors were first used on a large scale. Throughout the Middle Ages and modern times, the Republic of Venice was the pinnacle of glass art.

The lead glass was used in Venetian factories to make fine mirrors. They made an amalgam of mercury and tin to coat the front of the glass and improved the quality of the mirrors so that they now offered a clean reflection.

The Venetians, who were responsible for producing expensive mirrors for the European aristocracy, became increasingly famous as a result of this technological advance during the late 1600s.

The German drugstore Justus von Liebig invented the silvering process, which made it possible to produce mirrors with sharp images in the mid-19th century.

According to collectors, a mirror must be at least 100 years old to qualify as an antique. Many contemporary mirrors accurately replicate both the type and the fashion of mirrors from each era.

That is why it is important to know everything you can about them, from those that are merely functional to decorative pieces that can adorn the most majestic room.

Mirrors will always be items that never go out of style, which gives them a special place among the many items that people value.

Knowing the different types of mirrors that have been made since the dawn of time is the first step in learning a little more about the world of mirrors.

They are also known as free-standing mirrors, dressing mirrors, or vanity mirrors. They were unknown until the 18th century when technology had advanced enough to make them this big.

On the island of Murano, where they were able to sharpen the mirror and progressively increase its size, this method’s foundation was laid.

Although artisans of Murano were prohibited from leaving the island, many took the risk of facing death and managed to settle in other parts of Europe, thus spreading the technique of making mirrors throughout the continent.

The noble and affluent classes of several European nations were the only ones to own the first cheval mirrors, which were created in the late 1700s and early 1800s.

Also known as dresser trays, they became very popular at the end of the 17th century when the different European elites ordered the manufacture of furniture models to organize the utensils and accessories used in the bathroom.

Artisans began to include large mirrors in bathroom vanities, a custom that the Egyptians already had for centuries, but that returned to being in force in France, Germany, and Italy in the 17th century, where mirrors with hand-painted porcelain backs became popular. They also evolved to include small drawers for a better organization with bathroom accessories.

They’re the simplest mirrors and probably one of the oldest forms. They were small and attached to a handle. Handheld Mirrors for personal use we find in Egyptian culture, on the Silk Road, from China, and in the luxurious rooms of the Victorian era.

All mirrors designed to be hung on the wall are called wall mirrors. Although they were made a century earlier, their popularity peaked towards the end of the 18th century.

At the beginning of the 19th century, wall mirrors were an important tool for the nobility and other highly placed people.

In the late 19th century. They were used in the dining room for butlers so that they could monitor the course of the dinner and intervene when necessary without their presence being too noticeable.

In the antique market, these mirrors are widely available and in high demand. They come in many different designs, from those from the Victorian era to those created in the last century under the influence of Art Deco and Art Nouveau.

Knowing the many styles that have been popular throughout history is crucial because it will help you determine what period the mirror you want to purchase or sell belongs to and how to appraise it.

They are known for their gold and silver gilding. They also contain carvings of fruits, flowers, leaves, and angels, as well as ebony or tortoiseshell inlays. Usually, the best materials are used, and the designs are extremely elaborate.

The late 18th century and early 19th century were dominated by this style, which originated in Great Britain.

It is characterized by having fewer ornaments and carvings on the mirror frames than the baroque style and being the opposite of it. Rhinestones, beading, and carvings on the top edges of the frames were the only decorations. Most of them were made with dark wood.

Oval mirrors came into fashion in the early 19th century and were often rectangular, decorated with floral motifs, cornices, and columned frames.

Rococo mirrors were around for 200 years. From the 17th to the 19th century.

Their characteristic shape is oval or rectangular and they have a flat bottom, which they called a cathedral shape. They were decorated with sculpted plaster frames, always with many details and some even had paintings on the back of the mirror.

The most common motifs were flowers, seashells, birds, and feathers.

Art Nouveau represents a return to nature, so all of its designs were inspired by natural elements, with a flowing style and soft lines. This style had its greatest heyday from the late 1800s to 1910.

Art Deco is all about symmetry, straight lines, and minimalism. Mirrors of this style date back to 1920 and are the newest on the antique market. Therefore, they are easy to find at auctions and in online stores that specialize in antiques.

How can You Tell if a Mirror is Antique?

When you have a better understanding of the many types and designs of mirrors, you can focus on a few factors to determine whether the mirror you wish to sell or buy is an antique.

Vintage mirrors are unquestionably quite expensive, yet it is very difficult to estimate their actual value. Depending on the item’s condition, the materials used, the age, and the country of origin, prices in auctions and online retailers range from $500 to thousands of dollars.

For you to have an idea of the estimated prices, we’ve provided some examples of products available in online retailers below.

Collecting mirrors can be not only an interesting but also a very lucrative hobby.

To better understand the market and learn how to recognize a real vintage mirror, you should keep in mind that there’s a great variety and that you need to learn about the different styles at different times.

Never stop learning new things yourself and use this guide to understand the basics. We hope that the guide was useful and that now you’ve clearer and more accurate ideas.