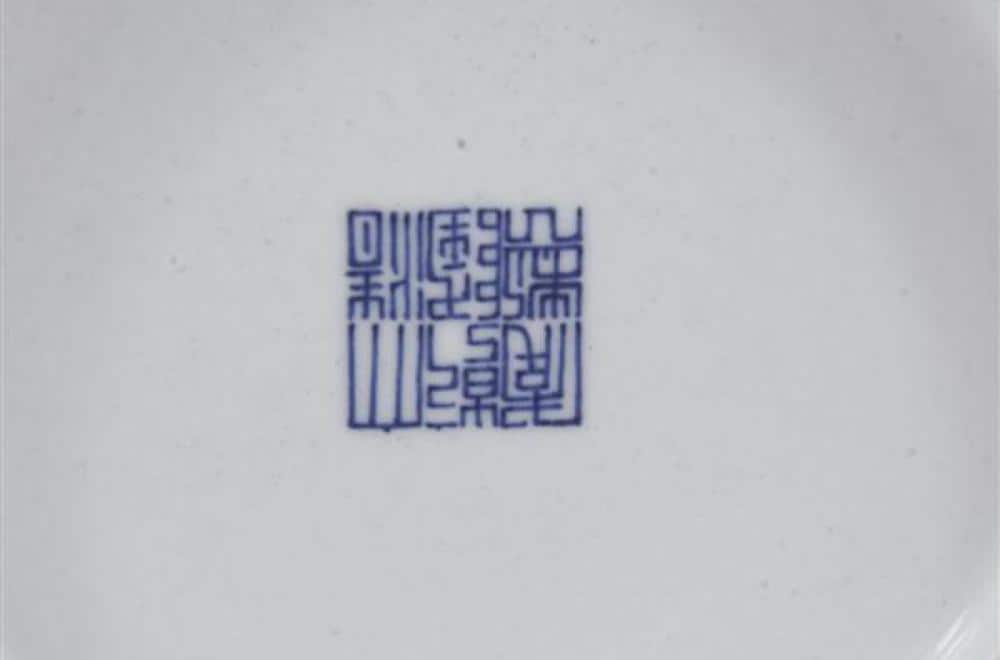 Chinese pottery is immensely pretty and delicate. But if you’re approaching it as a collector, you need to look past the aesthetic appeal of the piece.

Valuable Chinese pottery marks are one way to verify the value of your item, so it helps to get familiar with them. Let’s check out a few specimens to get an idea of what logos and stamps to prioritize in your treasure hunt.

Valuable Chinese pottery marks are sometimes known as reign marks. And no, we don’t mean ‘Made in China’. These marks are written vertically, right to left, using indigenous Chinese characters. A typical mark has 4 to 6 symbols confirming the emperor and dynasty.

It can be a little trickier to confirm the year on pieces like this because the seal marks are horizontal. But the mark is engraved in a double-square, which was typical of pottery from Hong Kong. And being a Buddha, it’s sure to send positive vibes and good fortunes your way.

Why are Chinese characters written longitudinally? Well, you read and write them from top to bottom, starting on the right and heading left. This might be because the earliest writing materials were long bone or bamboo strips so the writing things vertically made more sense.

Seal marks (like the type used on official stamps) were sometimes written sideways, with three symbols in the top row and three more in the bottom row. In the case of this figurine, the horizontal marks are listed at the base, under Chairman Mao’s throne-like armchair.

Vintage ceramics were pretty expensive – even back then. So the reign marks aren’t just a historical journal. They state the name and dynasty of the emperor as a form of ownership because these porcelain pieces were directly commissioned for use in the emperor’s palace.

Traditionally, these marks were on the underside of the pottery. But some ceramics used the marks decoratively, placing them on the tops or sides of the item. This zisha teapot has side marks, but it also has stamps on the inner lid and underneath the clay kettle. It’s 10cm tall.

In many Asian communities, the surname comes before the first name as a way of honoring your family. In those cultures, society trumps self. That said, some modern Asian citizens reverse their name order when they work in western organizations, just to make life easier.

Similarly, valuable Chinese pottery marks are sometimes written the western way (i.e. horizontally), but you’d still read them from right to left, following Chinese tradition. Seals are typically crafted with sideways symbols as well, often with a frame around the stamp.

Imperial Chinese pottery falls into two dynasties – the Great Ming (Da Ming – 1368 to 1644) and the Great Qing (Da Qing – 1644 to 1911). These make the first two characters on any 6-character mark but are left out of 4-character marks. The next two are the emperor’s name.

The last two characters on any pottery mark are the words ‘Made for’ (Nian Zhi). This complete mark is therefore translated as Made for Emperor Guangxu (aka Kuang-Hsu) of the Da Qing Dynasty, who reigned from 1874 to 1908. The name of the dynasty is omitted.

Original Chinese pottery marks were painted under the ceramic piece, often in blue ink and covered with a protective glaze. The style is described as underglaze blue, and the marks are usually enclosed in two circles. But sometimes, you can identify the pottery through symbols.

Each image represented a different idea, e.g. cranes for a long, harmonious marriage, or fish for a marriage blessed with lots of kids. Fish were also a status symbol for +5th rank nobles and palace officials. The phoenix and dragon pair were often displayed at wedding feasts.

Although the emperor’s mark confirmed the value of a piece, it wasn’t always used. Around 1667 during the Kangxi period, the emperor got a tad superstitious. He worried that if pottery cracked and had his name on it, that was bad luck, so he banned his ‘personal logo’.

Chinese ceramics from that time might have a double circle but no name or dynasty on it. Or the pieces might have a symbol inside the circle (instead of the emperor’s name). Common symbols included lingzhi mushrooms, Artemisia leaves, or those coily ruyi scepter heads.

Yes, fonts were a thing is valuable Chinese pottery marks. Kaishu scripting (581 to 906 AD) is the more ‘stereotypical’ Chinese writing while the older font aka zhuanshu scripting (1500 to 221 BC) took hold during the Qianlong era (1736 to 1795. But you’ll see lots of font overlap.

Seal stamps generally used zhuanshu writing. And though this Qianlong mark isn’t framed, it’s in rusty red zhuanshu. You can tell the difference by comparing the mark under the vase with the writing on the side of the vase. This decorative messaging looks closer to kaishu.

While under-glazing in cobalt blue was popular, other stamping options were available. You could do an enamel mark black, pale blue, iron-red, or gold. But these enamel marks were on top of the glaze. Other options were to cut (i.e. incise, carve, engrave) or press (i.e. imprint).

During the Qianlong period, ceramics in block colors were big in Japan, and the style soon crossed to China. That blocky background hue is called the ground. So you might see a vase in red or jade green with gilt décor to highlight the wire. This style is called totai cloisonné.

Pottery marks are centered and placed underneath these ceramic pieces. But you might find a horizontal mark near the rim of the item. You might also find markings in a single circle separated into three rows with grids in between. Or a double square with cropped corners.

This sample is a gorgeous vase with a glossy black glaze. To make the mark easy to read, the bottom of the vase is left white, and the under-glazed mark is painted in cobalt blue without a frame. The upper rim of the vase is white as well. It could be a period piece or a homage vase.

While the bulk of Chinese ceramics were made for the emperor, you’d still find pieces for other aristocrats. Pottery with imperial intent was categorized as guanyao, meaning official, while the rest was minyao, meaning public. Minyao ceramics are far lower in quality terms.

The difference between the two classes wasn’t necessarily in the craftsmanship. The pottery was still good, but the distinction was in the mark. After all, this piece wasn’t for royalty, so artists didn’t have to be as careful when painting or carving those intricate reign symbols.

As you sift through valuable Chinese pottery marks, look out for apocryphal marks. This is when newer artists copied the reign marks from earlier eras. These aren’t meant as fakes – they’re intended as an homage to the earlier masters (and mistresses) of this great ceramic craft.

The two most common apocryphal marks are from the eras of Chenghua (1465-1487) and Xuande (1426-1435). But sometimes, you’ll see something that looks like Chinese writing, except the characters are drawn wrong, or placed in the wrong order. That’s probably a fake.

If you’re looking for a valid reference point during your treasure hunts, try Marks on Chinese Ceramics by Gerald Davison. The 2021 edition has roughly 4,200 valuable Chinese pottery marks that are all verified. But don’t buy the overpriced version stateside – go to the source.

You can find copies of the book on UK sites for under £100, which is about $130 to $150 at the time of writing. Even with shipping, it’s still a better deal than the thousand-dollar ask prices on eBay and other auction sites. If you buy it, don’t lend it out – it won’t come back!

You might be looking to identify more contemporary Chinese pottery marks. These are likely to have the name of the company or factory and the year (e.g. Long = Year of the Dragon). They’d still have 4 to 6 characters and may include the phrase Nian Zhi or Zhu (made in).

The stamp might mention the material used. Yi Qian Tang Long Nian Zhi from the 1980s was made in the Year of the Dragon at Yo Qian Tang factory. Yi Xing Long Zhu Fencai (1909) is an enamel (cai) from Yi Xing Long factory. But this vase here pays homage to Qianlong.

Earlier makers’ marks on valuable Chinese pottery were encircled twice. Newer pieces will sometimes have a double square instead and might use a rubber stamp rather than hand-painted or etched ‘logo’ markings. The outer square may be thicker or have stamp smudges.

And while many marks had ‘zhi’ or ‘zhu’ which means ‘made’, a few had ‘zuo’ which means ‘created’. It’s a more refined term that says more about the artist than the art, and it doesn’t affect the value of the piece. The style of the pottery can raise the price though, like this one.

Other marks you might find on newer pieces include qi (porcelain) or cai/fencai (enamel). But these interpretations will depend on the context. Newer pieces from the 60s and 70s might be stamped ‘Decorated in Hong Kong’, written in English. They became quite valuable.

These pieces were often imported as plain porcelain from Japan. These blank white pieces were then painted and embellished by Hong Kong artists. The painter might sign their name, or they might include of the factory or town in their maker’s mark. But this is an older piece.

Sometimes, you might see a longer marking shaped like a semicircle. This branding usually contains the factory name, private kiln logo, function, and location (e.g. city, town, name of the hotel it was made for, intended use, etc.) You might even see the signature of the painter.

Other times, the mark shows the name of the buyer. This means the piece was ordered for a particularly wealthy family, house, or collection. Inspect the marks, and check for artificial staining or forced wear and tear. These are clues that your so-called antique may be fake.

2 thoughts on “17 Most Valuable Chinese Pottery Marks Worth Money”