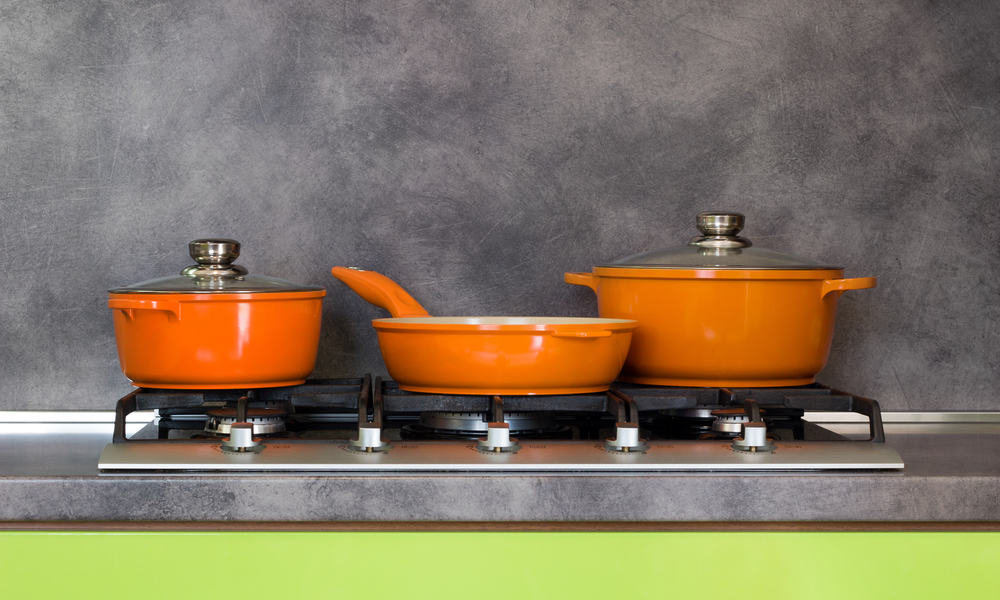 Mid-Century Modern is the latest trend in vintage homewares. And that means some CorningWare tableware can be worth big money!

But how do you know which patterns are worth seeking out? That’s what we’re here to discover!

We’re going to explore some of the rarest CorningWare patterns out there. And we’ll find out just what it is that makes collectors so keen to get their hands on them! 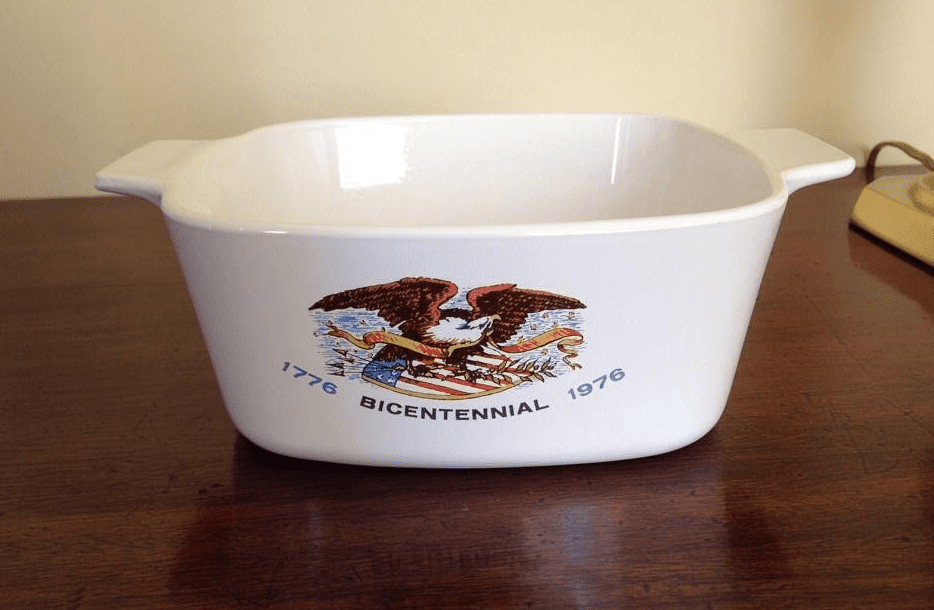 In 1976, Corning produced a Bicentennial Eagle design. As you’ll have guessed from the name, it was made to mark the bicentenary of the United States.

Only one piece is known to exist in the pattern – a half-quart casserole.  And we’ve managed to find only one specimen that’s ever been sold. That was auctioned back in 2006, and sold for a modest $20.

But since then, interest in CorningWare as a collectable has rocketed. And with other examples impossible to track down online, if you have one of these dishes – hold onto it! We’d be willing to bet it would be very desirable to modern collectors. 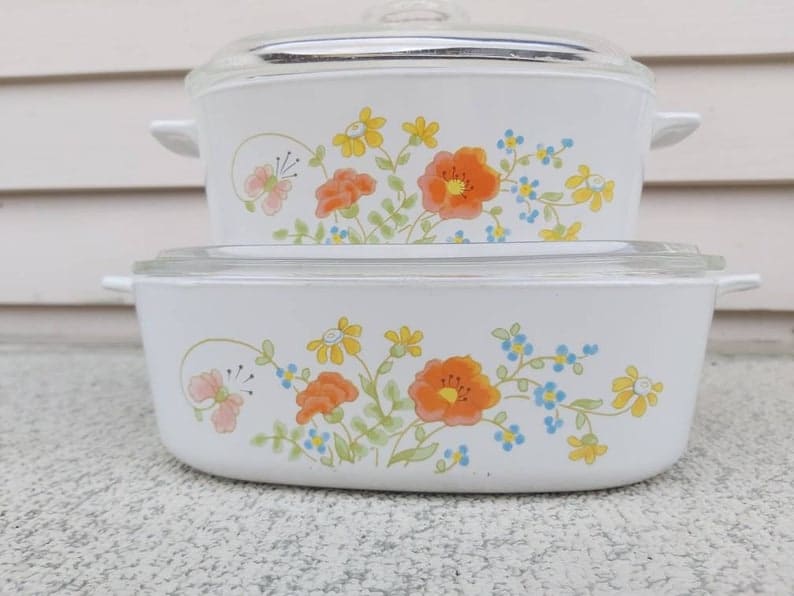 Wildflower was one of the longer-running patterns produced by CorningWare. It adorned casseroles, saucepans and other cookware between 1977 and 1985.

Its bright colors made it very popular. The centerpieces were orange-red poppies, surrounded by other flowers in shades of blue, yellow and pink.

All the CorningWare pieces were safe for use in ovens, microwaves and even dishwashers. The design also appeared on the Centura dinnerware produced later by Corning. When decorating Centura items, the pattern is known as “Spring Bouquet”.

Today, a two-piece casserole set like the one in the picture will set you back about $200. 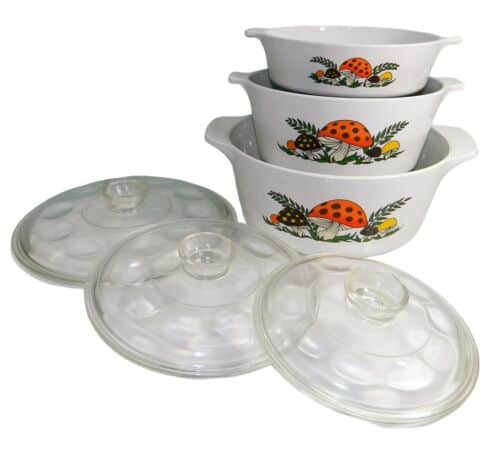 The cheerful Merry Mushroom pattern was produced exclusively for the department store Sears. It was made for only a couple of years, between 1975 and 1977. That makes it far less common than many other CorningWare designs. And good examples are very collectable.

The design features brightly colored mushrooms and leaves. The palette is a classic retro combination of green, orange, brown and yellow.

And the lids here are very distinctive too. They feature large dimples, reminiscent of the spotted mushroom caps in the design.

At the time of writing, we found a set of three casserole dishes with lids available online. They showed some signs of wear, and the glass lids were a little frosty. But the desirability of the pattern meant that they were still being offered for the princely sum of $183. 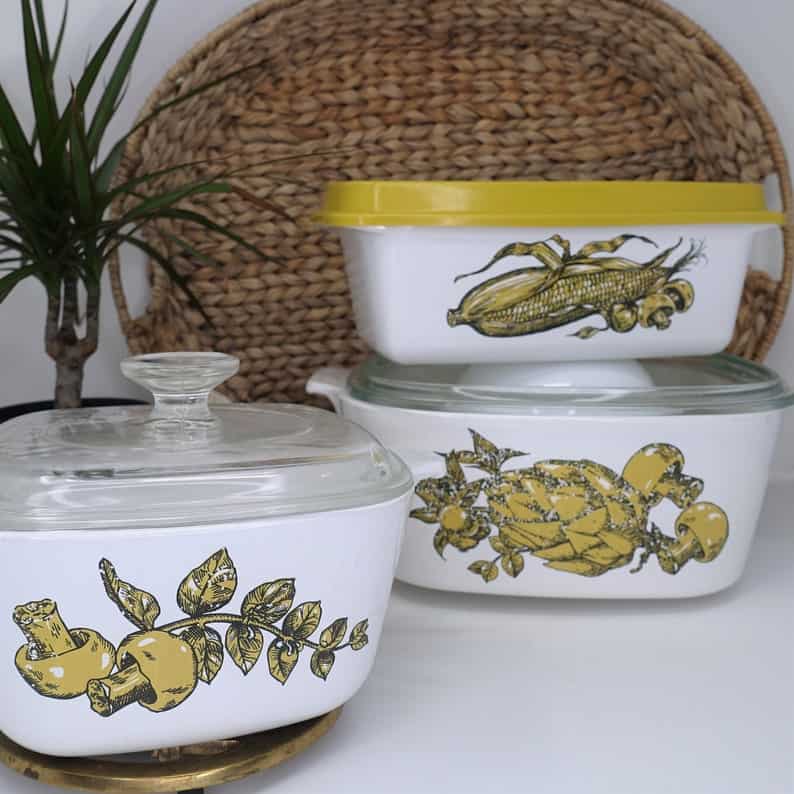 Nature’s Bounty was a gift line produced by Corning in 1971. It seems to have consisted of only six pieces. There were two different sized saucepans with lids, a bread pan with plastic lid, a sauce pot, a skillet and an 8-cup “Brew ’N’ Serve”.

The pattern is printed in a yellow-brown shade, with different vegetables starring on different pieces. The bread pan, for example, features a husk of corn, while other pieces are decorated with artichokes and mushrooms.

The pattern was plagued with a tendency to flake away. That, together with the short production run, makes finding good quality pieces a challenge.

This three-piece set comprises the bread pan and two lidded saucepans. The saucepans in particular show signs of the infamous flaking problem. Even so, the rarity of the set means it will set you back about $200. 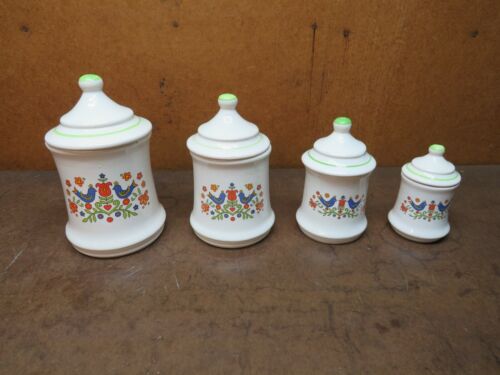 CorningWare’s Country Festival pattern is also known as “Country Festive” or “Friendship”. It features two bluebirds surrounded by orange flowers. And it was a relatively modern design, made in the late 1990s.

Today, prices vary widely, depending on the rarity of the item. It’s possible to pick up a four-piece set of lidded casserole dishes for just $33.

Lots of other oven and tableware items are available too. A lovely set of four glasses with the pattern could be yours for $68. That price reflects a degree of wear, although there are no chips or cracks.

But this rare set of kitchen canisters, perfect for tea, coffee, sugar and flour, is in a different league. At the time of writing, it was being offered for sale online at $3,654. 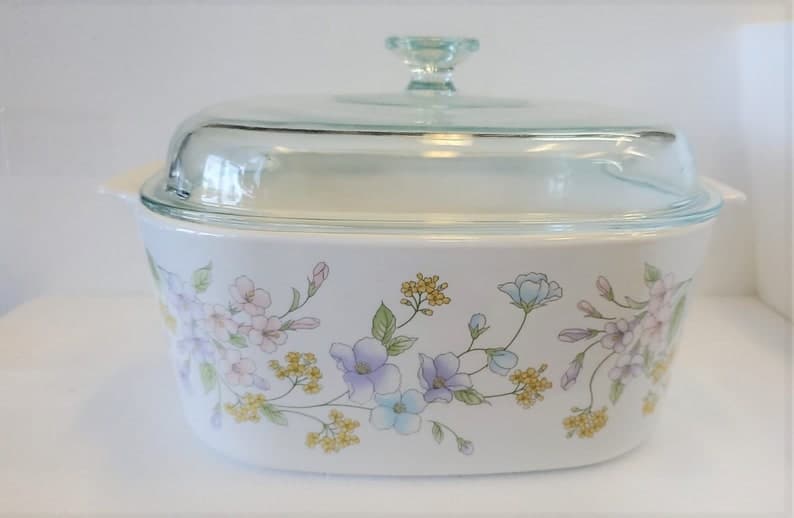 Pastel Bouquet is an exceptionally pretty pattern, more timeless than retro. It features flowers in an array of pastel shades including blue, lilac and yellow.

The pattern appeared on pieces made between 1985 and 1990. It works particularly well in traditional country kitchens. And its relatively recent manufacture means it’s not too difficult to track down items in better condition.

The best examples will still set you back a pretty penny, however. This elegant lidded casserole, in excellent condition, is for sale online from a Canadian retailer at the time of writing. If you want it, you’ll need to spend nearly $200. 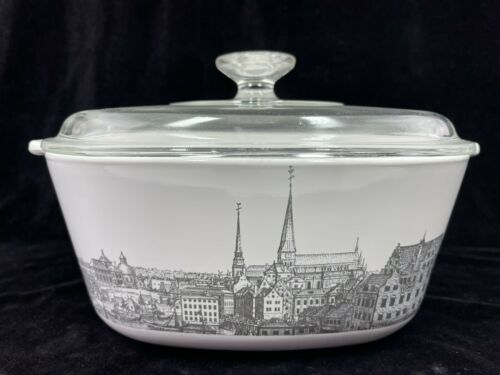 In 1970, Corning released a limited edition pattern, especially designed for gifting. It was called “Renaissance” and was based on a 17th century etching of the port in Stockholm.

The pattern was painted in a shade known as “Minerva gray” to replicate the ink of the etching. Five different pieces are known to have been produced: three saucepans with lids and cradles, a stove top percolator and a “broil and bake” tray.

The lids here were very unusual for CorningWare. The underside had a pebbled effect, only found on one other pattern (Nature’s Bounty).

All this makes items in this d very interesting for collectors. This lidded 2.5-quart saucepan was available online at the time of writing for $100. The 1.75-quart version, with its cradle, would set you back $160. 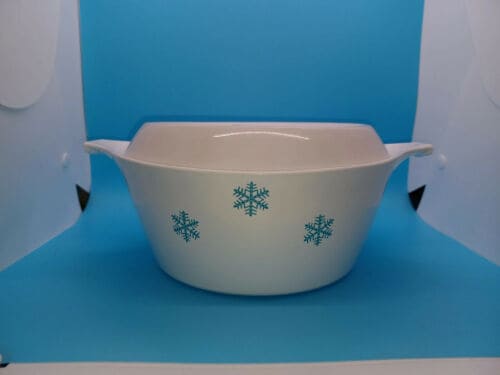 Oven to tableware comes into its own at Christmas. So it’s perhaps not surprising that patterns with a festive theme tend to be very popular.

This one is made by Centura, a line introduced by CorningWare between 1962 and 1977. It was more resistant to chips than traditional CorningWare, but couldn’t be used on stovetops or in microwaves.

This casserole with ceramic cover, then, was strictly for use in the oven. But its deep sides and 2-quart capacity meant it was otherwise very practical.

It was in great condition when it came up for auction online in May 2022. There were just three tiny spots of wear on the glaze, two of which were hidden away beneath the handles.

It was a rare item – and it attracted plenty of interest from collectors. It eventually sold for $615. 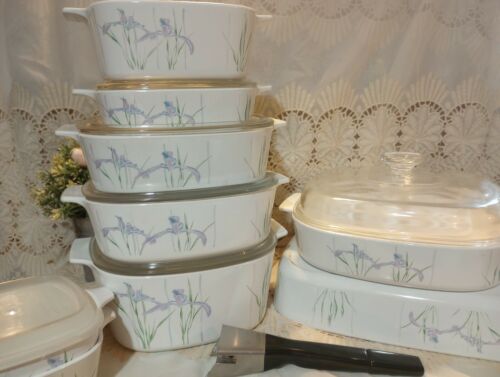 Shadow Iris is one of the more recent patterns on our list, having been discontinued in 2020. It’s an elegant design, featuring wispy purple irises and their gray shadows.

As a relatively recent offering, prices tend to be lower than mid-century examples. You could pick up a lasagne pan in good condition for $30, and a matching colander for $25. And a boxed set of three lidded dishes is for sale online at the time of writing for just $150.

It’s also possible to find large sets, and these can offer excellent value for money. The set in the picture sold recently online. It included an array of dishes and lids of all sizes – 16 pieces in all. And it was snapped up via an online auction platform for $390. 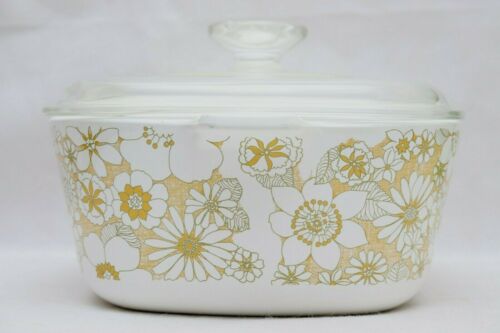 For collectors looking for quintessential mid-century design, CorningWare’s Floral Bouquet really hits the mark. It features a bold pattern of white flowers with orange details against a crosshatched orange ground.

Examples in perfect condition are hard to come by, and command a premium. But prices vary widely, and it’s still possible to find some more affordable specimens. We found a casserole dish without its lid and with only minor signs of wear for sale online at $50.

But the example pictured comes complete with its lid. And both dish and lid are free of chips or cracks. At the time of writing, it’s still available for buyers prepared to spend $975. 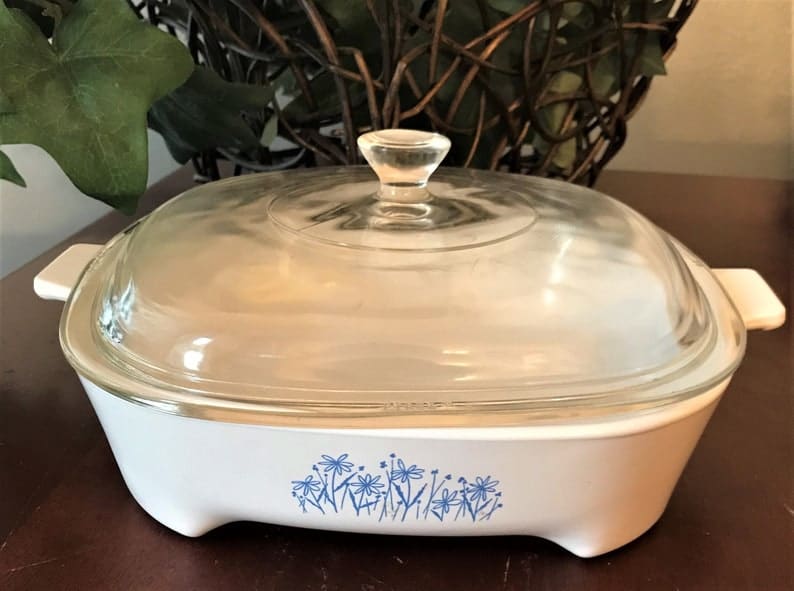 Back in the 1980s, CorningWare produced a pattern exclusively for retail at department store Sears.

It featured a simple, almost scribbled, design of blue flowers on a white ground. It’s sometimes referred to as “Meadow”, although there’s another better known CorningWare pattern by that name.

Rare pieces in good condition can be very valuable. At the time of writing, a model 8457310 casserole dish, with its original lid, was selling for $6,000.

But it’s also possible to pick up nice examples for considerably less. This charming browning dish is microwave friendly, and has a capacity of 2.5 quarts. And it’s also for sale online at the bargain price of $32. 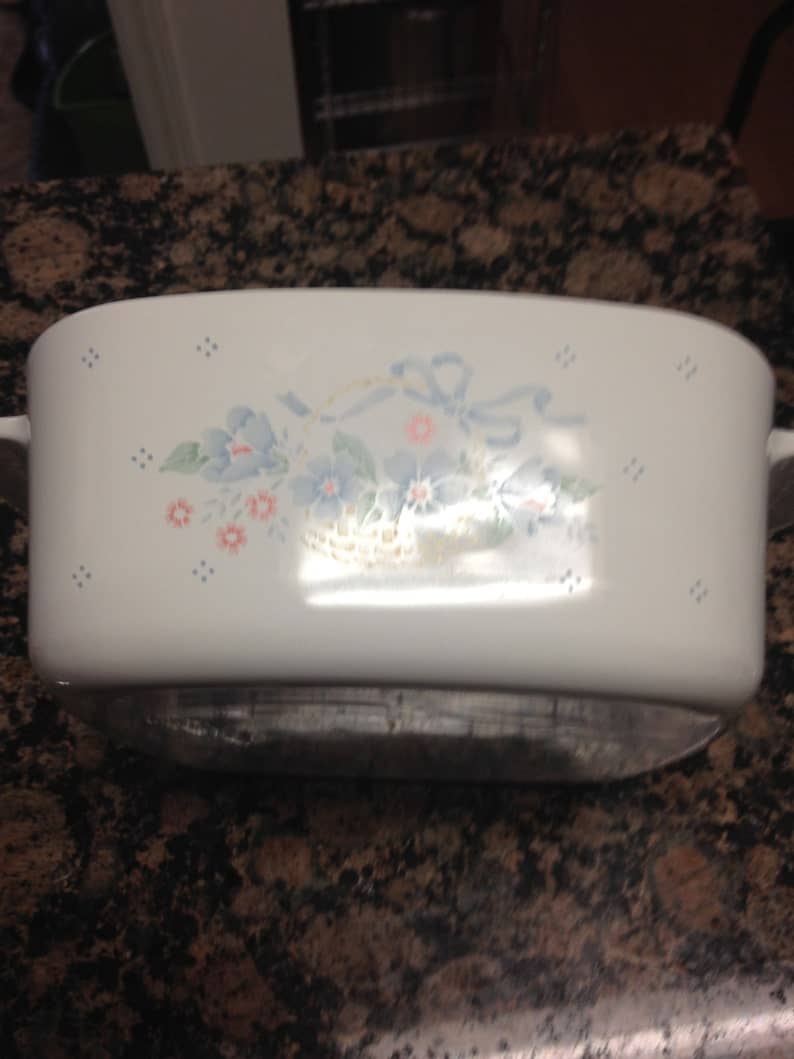 The Country Cornflower pattern was an update on CorningWare’s first ever pattern, Blue Cornflower. It was produced from 1988 to 1993, and features blue cornflowers and smaller red flowers in a basket tied with ribbon.

Both cookware and a dinner service were produced, allowing hosts to present a perfectly coordinated table.

The design is slightly fussier and less abstract than earlier CorningWare. That perhaps gives it slightly less appeal to collectors. And it’s still possible to buy a good range of pieces at modest prices.

Rarer items, however, can still command very high prices. We found one dish, minus its lid, for sale online at $6,000. 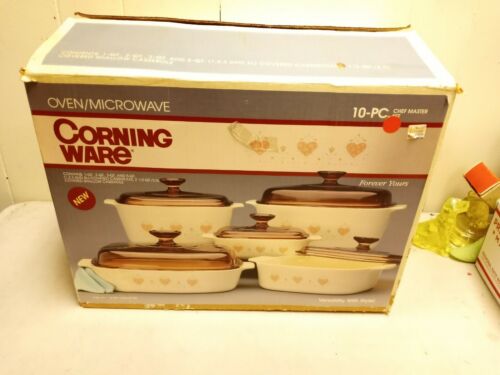 Retro patterns are always collectable. And when a set comes in its original packaging, it’s even more desirable to collectors.

This box contains no fewer than ten pieces of CorningWare. And it’s all neatly packaged, just as it was the day it came out of the factory.

The pattern is called “Forever Yours” and features three pastel hearts with stylized flowers and dots. It’s beautifully romantic. And it would look wonderful on display in a country kitchen.

It was snapped up by one lucky buyer for $400. For ten items, we think that’s pretty good value for money. 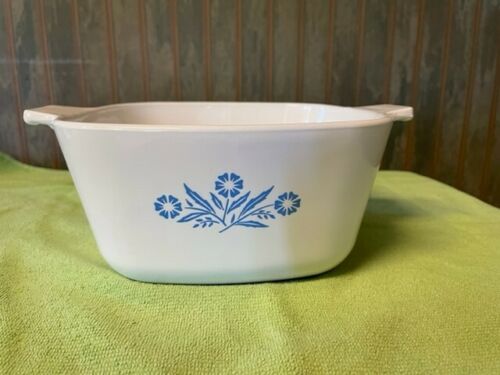 This simple pattern of three blue cornflowers on a white ground has legions of fans. And they’re prepared to spend serious money to add early, rare pieces to their collections.

This 1.75-quart casserole dish with lid was one such example. It dates from the 1950s and was offered in pristine condition, with no chips or scratches. The original CorningWare stamp and measurements on the base were as fresh and clear as the day they were made.

It came up for sale on an online auction site in May 2022. The high starting price meant that it attracted only one bid. But that collector was prepared to pay $10,000 to secure it.

Later versions of the same design can be acquired more cheaply. A three-piece set of casserole dishes in 1, 1.5 and 1.75-quart sizes sold online in May for “just” $8,000. These bore a later stamp, noting that they were safe for use in both ranges and microwaves. 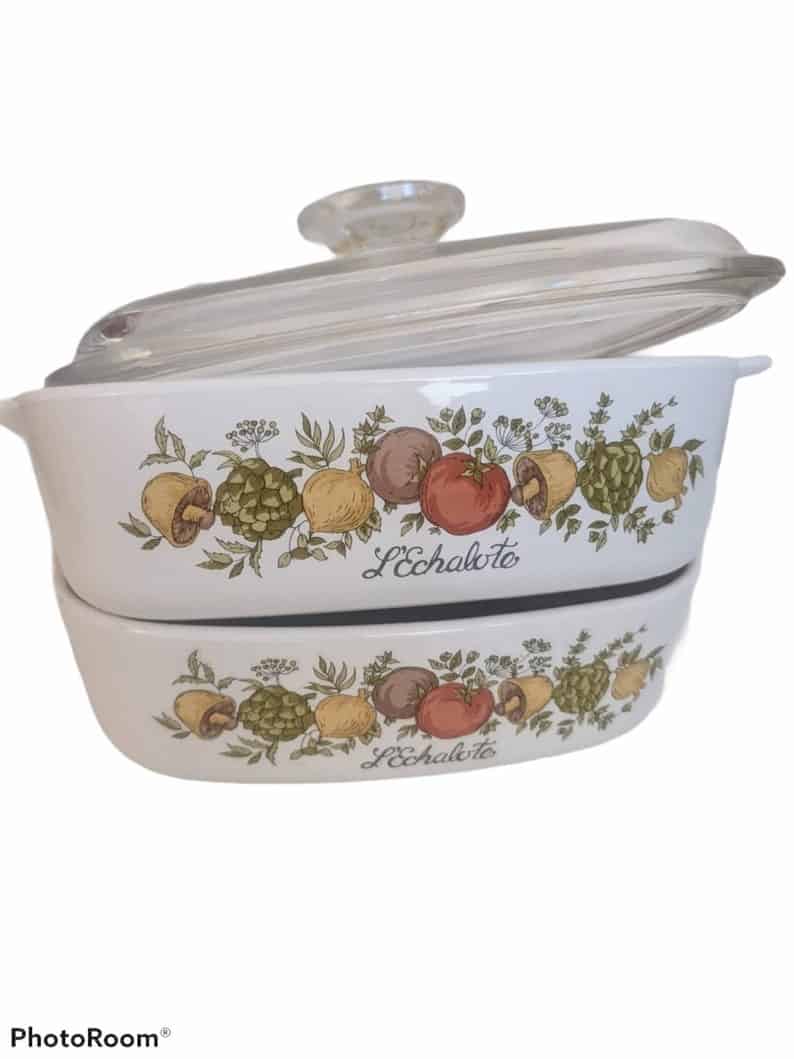 This pattern is one of the most highly prized by collectors. It combines depictions of salad vegetables and herbs with the text describing them in French. Depending on the item, that could be shallots, marjoram, basil or sage.

This is one of the rarest of all CorningWare patterns – but it’s still possible to get your hands on some items without spending a fortune. We found a lidded baking dish with a chip on the lid for just $13.

If you want a pristine example of a rare item, though, you’ll pay a whole lot more.  A one-quart lidded dish – the most sought-after size – is currently on sale online. It’s in perfect condition, with the original hologram stamp still intact. And if you want it, it will cost you over $16,500.

That brings us to the end of our look at some of the rarest CorningWare patterns around! We hope you’ve enjoyed learning more about these fabulous retro items.

And if you have some CorningWare lurking at the back of a cupboard, why not take a closer look? It could be worth a lot of money.

And even if your example won’t get collectors’ juices flowing, why not bring it back into use? These pretty and practical items surely deserve a place at any table!