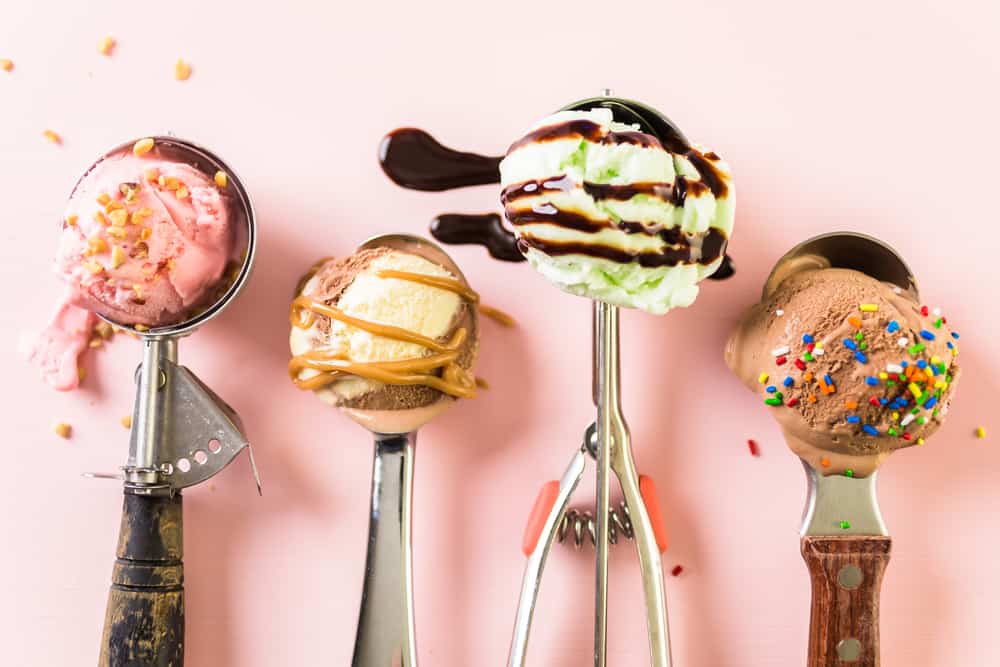 Who doesn’t go crazy over ice cream? A heavenly frozen treat that even my dog is obsessed with! Eat it from the cone, on a stick, right from the tub, there is no such a thing as eating ice cream the wrong way.

However, if you are going to share it with some company then you might consider using a scoop. So what if I tell you that a vintage ice cream scoop is a kitchen tool that you need to acquire this summer (if you didn’t inherit one)?

If you like the sound of this idea, read on and find out why and where you can get yours.

When Was The Ice Cream Mold Invented?

The hero of this article is Alfred L. Cralle an inventor who is best known for designing the first ice cream scoop back in 1897. Cralle was working in a hotel in Virginia when he came to an idea to make an ice cream scoop.

He noticed how ice cream servers had a hard time trying to scoop out a desirable amount of ice cream for the customer and place it in the cones or bowls while using one hand.

The ice cream usually sticks to spoons and ladles and servers needed to use two hands and two different tools to serve a customer which was time-consuming, and we know how time and ice cream don’t go well together.

Cralle invented the first ice cream scooper and it was called “Ice Cream Mold and Disher”. It prevented ice cream from sticking and it was easy to operate with a single hand. Since it was strong and durable and inexpensive it became an instant hit.

How Does A Vintage Ice Cream Scoop Work?

Well, this mainly depends on what kind of vintage ice cream scoop you have. Since they were made from durable aluminum, chrome, stainless steel, or die-cast zinc alloy, they could easily be shaped in any shape you desired.

The first ice cream scoop featured a key at the end of the scoop that you need to turn to scrape the interior of the scoop and release the ice cream. This isn’t convenient since you need both hands to operate the scoop.

Other types of ice cream scoops use the lever-action that allows you to operate it with a single hand while holding a cone or a dish in the other hand. Also, these models are more suitable for ice creams that have a harder texture since thanks to the scraper, ice cream won’t stick to the interior.

As I mentioned above, you can find many different types of scoop. They were most all made from aluminum but the only difference was in the actual style of scoop. Let’s see what kind of scoops you should try to hunt down.

This was the first model of ice cream scoop, the one that I already described how it works. The problem with this scoop was that you needed two persons for a single serving, one to operate the scoop and the other to hold the cone or dish.

The ice cream usually stuck to the ladle and the end result was messy instead of yummy looking. In 1867 George W. Clewell invented the conical scoop with the key on top that was used for dispensing the ice cream.

This ice cream tool is a very valuable collector’s item and it is in high demand among soda fans. Its unique key shape, age, origin, and condition determine the value but, you’ll spend at least $40 for this handy equipment.

The conical key scoop was a great improvement in the field of dishing ice cream, but it still wasn’t effective enough since the operation required two persons. This is when the above-mentioned inventor came up with an idea for improving the mechanism.

His original patent featured a cone-shaped scoop with a mechanical lever that scraped the ice cream from the scoop into the cone or dish. He also invented the hemispherical scoop that we use today. These first lever-action scoops had wooden and very comfortable handles.

This type of vintage ice cream scoop can be found for a starting price of $30 and higher.

Some scoops created special shapes for specific situations, like square-shaped scoops for creating an ice cream sandwich. Triangle-shaped scoops were made for serving ice cream portions on top of your favorite piece of the pie.

Squared-shaped scoops are very valuable, and you can find them on Etsy, or eBay for around $200. But here comes the shocking info, triangle-shaped scoops cost from $1,250 to $2,500 which is an extremely high price for kitchen tools.

The most valuable and rarest scoop is a heart-shaped scoop that will break your bank but not your heart. This cute-looking scoop sells for about $7,000.

Well, I have already discussed the actual prices you’ll need to pay for different kinds of vintage ice cream scoops. However, I didn’t mention the factors that will determine the final price. So here it comes:

What to look for when collecting vintage ice cream scoops?

Since antique ice cream scoopers are very uncommon items to collect it is hard to tell their exact value and what exactly you need to look for when trying to score the most valuable one.

I will repeat once again; the shape of the scoop affects the price a lot as we saw. This is probably because these specific models weren’t manufactured in larger amounts as a regular scooper.

Also, if you are spending money on a vintage ice cream scoop make sure you buy the one that is still working so you won’t waste your money.

Antique ice cream scoops originate back from the late 19th century. As soon as the first model of scooper was invented they have become an integral part of every kitchen utensil set, even though the ice cream wasn’t as a nearly popular snack, as it is nowadays.

Moreover, people mainly consumed it during the summer, while we eat it all year round. This is exactly why it is a great idea to acquire a vintage ice cream scooper that will allow you to create an oddly-shaped scoop of ice cream, and make it all fun and games.