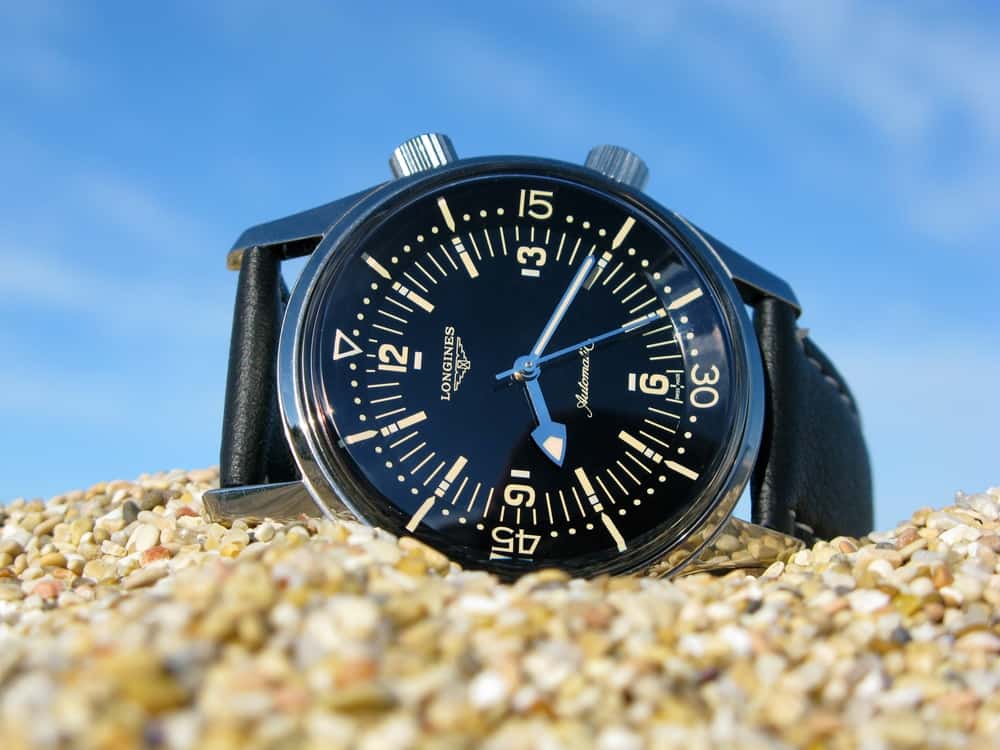 In the era of smartphones and smartwatches, some people still prefer to wear and collect mechanical watches. This is mainly due to people’s admiration for the craftsmanship and complexity of a watch with a manual wind movement.

In addition to modern timepieces, collectors enjoy vintage watches from different eras. A brand that usually comes up in conversations regarding vintage luxury watches is Longines. Longines is one of the oldest and most well-known Swiss luxury watch brands, and some vintage Longines watches are very popular among collectors.

But, what is it that makes Longines and its watches so popular? Are all Longines watches valuable? If you want the answers to these questions, keep on reading!

In this article, we’ll look at Longines history and what types of watches it produces. Also, we’ll help you determine your Longines vintage watch’s date and potential value.

Longines, or Compagnie des Montres Longines, Francillon S.A as it’s officially known, is a Swiss luxury watch manufacturer with its headquarters in Saint-Imier, Switzerland. Longines is a very old watch brand with a very rich history.

Longines’ founder was Swiss watchmaker Auguste Agassiz. He founded the brand in 1832, along with two partners, under the name Raiguel Jeune & Cie. The brand’s logo – a winged hourglass – was registered in 1889, and it’s one of the oldest active logos that remains unchanged.

Longines has always strived to be revolutionary. It was one of the first brands to mass-produce its watches as early as 1867. Also, its owner at the time, Ernest Francillon, insisted that the brand should focus on crown-wound pocket watches rather than the traditional key-wound ones.

The year 1867 was a crucial one for Longines, as it was also the year that it produced its first in-house movement, the caliber 20A. This innovative movement utilized an anchor escapement, usually found in pendulum clocks, and wound via a pendant crown.

Not long after this innovation, Longines also came out with its own chronograph movement, the caliber 20H. Longines then utilized this movement to create precise pocket watches that were used to time professional sports events such as horse racing.

By the late 19th century, Longines had established itself as one of the best Swiss luxury watch manufacturers. However, this popularity also made the company a target for producers of counterfeit watches. This significant issue hurt the brand’s reputation at the time.

During the early 20th century, Longines expanded its catalog to include different types of watches, including aviation wristwatches. Unfortunately, Longines was one of the companies that were heavily affected by the “quartz crisis” of the 1970s, with significant losses to its production.

Eventually, Longines was purchased by the Swatch Group in 1983. The brand remains a part of the Swatch Group to this day, along with other popular watch brands like Omega, Tissot, and Hamilton.

Longines has always been a very versatile brand that has produced several types of watches, both traditional and unconventional. Some popular styles of Longines watches include:

Similar to most watch brands, Longines initially produced pocket watches. Longines’ pocket watches were revolutionary in design due to being crown-wound, and they were powered by the brand’s innovative in-house calibers.

The demand for Longines pocket watches was very high until World War I. After that, pocket watches started to diminish in popularity, making Longines shift its production to wristwatches.

The term “classic” watches refers to timepieces that have a simple and elegant design. They usually have a standard three-hand layout and only display the time. An example is the Longines Flagship collection, one of the most popular vintage Longines watches.

These timepieces were the most prevalent during the 20th century. Its modest size and simplistic design meant that you could wear them for any occasion without looking out of place. These everyday watches from Longines are still some of the most popular ones the brand manufactures.

In 1927, Longines produced its first aviation watch, the Longines Weems. An aviation (or pilot) watch is a timepiece that’s usually larger in diameter and features big Arabic numerals to be visible by pilots at all angles.

Famous aviator Charles Lindbergh took notice of the original Weems and decided to collaborate with Longines to improve it. Thus, the Hour Angle aviation watch was created, which could help aviators calculate their longitude while airborne.

Dive watches became popular during the 1950s and 1960s for their utility and durability. Made of durable materials and tested for water resistance, these watches were originally worn by divers and marine soldiers. However, they soon became popular in the consumer market.

Longines’ first attempt at a dive watch was the Nautilus Skin Diver during the 1950s. Skin diving essentially means snorkeling, which doesn’t require the user to go to large depths. Thus these skin divers had a lesser water resistance than actual divers watches.

Longines has always produced stellar chronograph watches. After all, it was the first to create the caliber 20H, an in-house chronograph movement for pocket watches. Also, Longines calibers were some of the first to measure up to 1/100th of a second.

Longines incorporated its chronograph movements in several other types of watches, including pilot and dive watches. In fact, a very popular Longines dive watch from the late 1960s was the Longines Super Water-Resistant Diver Flyback Chronograph

How Do I Find Out What Year My Longines Watch Is?

Since Longines has been around for such a long time and produced numerous different watches, sometimes it can be hard to find details about them. Thankfully, Longines has utilized a very meticulous system of serial numbers which correspond to a specific production year.

Keep in mind that this dating guide can have slight inaccuracies and doesn’t guarantee the authenticity of your watch. If you want the complete details of your watch, you should contact Longines directly by email and ask for more information.

Longines offers a great service that provides you with historical information about your watch, along with a certificate of authenticity. All you need to do is visit their website and send them all the information required to get a full picture of any vintage Longines watch.

How Do I Know if My Longines Watch Is Vintage?

Vintage watches have surged into popularity over the past few years. This has led brands to create vintage-inspired timepieces that resemble some of their older models.

Longines itself has the Heritage timepieces, a collection of modern watches that are almost identical in appearance to some of their most popular vintage designs.

Therefore, it can sometimes be challenging to recognize a true vintage watch from a vintage-inspired one. There are, however, a few characteristics that are unique to vintage watches. These are:

One of the most telltale signs of vintage watches is their smaller size. Back in the day, it was common for both men and women to wear smaller watches because they looked more elegant.

In fact, male vintage watches were usually between 33 and 35 mm in diameter, which is very small compared to today’s standard sizes being around 40 mm. The same applies to women’s watches, although female watches can still be found in diameters below 30 mm.

In previous decades, wristwatches came in more classical styles without many complications. Most watches were simple three-handers that displayed the time and sometimes the date.

Even the most complicated watches back then, which were usually chronographs or pilot watches, pale compared to some modern timepieces.

The materials used in watchmaking have not changed significantly over the decades. However, some of them have become more durable. For example, the stainless steel used for watches during the mid-20th century is considerably less durable than modern-day stainless steel.

Therefore, an actual vintage watch that was in use should show signs of natural aging like scratches and dents. Another material that was more prevalent in previous decades was gold, and many vintage watches are gold-plated or made from pure gold.

Nevertheless, most Longines watches cost a few thousand dollars brand new, which is still a significant amount of money. Additionally, Longines has several vintage timepieces that are highly coveted and cost even more than some of its newer timepieces. Popular Longines vintage watches include:

The Flagship collection came out during the late 1950s, and it was a clear indicator of the brand’s direction in terms of design. An elegant dress watch with a simple white dial and a case that was made of stainless steel or 18-carat gold or rose gold.

They usually came in at around 35 mm in diameter, featured a domed Hesalite crystal, and were equipped with a manual wind or an automatic movement. Their prices vary between $1,000 and $5000 depending on the materials and the watch’s condition.

The Longines Majetek is a famous aviation timepiece issued in 1938 for the Czech military. It comes in an almost rectangular case with a black dial that has large Arabic numerals and cathedral hands.

The case size is 40 mm and includes a rotating fluted bezel. The length between its lugs is 24 mm, and the watch comes in a leather nato strap. Its price can reach up to $6,000, depending on the condition.

As we mentioned before, Longines has always produced great in-house chronograph movements. One of those calibers is the 30CH which has a flyback feature and was present in several Longines chronographs during the 1960s.

One such wristwatch was the Longines Flyback Chronograph ref. 7413. The watch came in a 38 mm case with round pushers, and the dial was a plain white color with a red telemeter scale and a blue tachymeter scale. The popularity and complexity of this watch cause its price to be as much as $10,000.

The Super Water-Resistant Diver Chronograph mentioned above is also known as the Nonius and is one of the most unique and popular vintage Longines watches. The case of this watch measures a rather large 43 mm and has an intricate shape.

The Nonius came with the caliber 538, a custom version of the 30CH, and had a unique yellow gauge that was attached to the chronograph hand. This gauge was used to measure time more precisely. This peculiar design choice makes the Nonius a very stylish timepiece even today.

This Longines Diver is one of its era’s most famous dive watches. The reference 7150-1 is the successor to the Skin Diver and includes improvements in all aspects. The watch’s case has a 42 mm size and is more durable with a water resistance of up to 100 m.

The watch came with an upgraded movement, the caliber 290. It also features two crowns, one for setting the time and one for turning the inner rotating bezel. The entire dial layout makes this particular timepiece popular, as it gives it a classy feeling you don’t get with other tool watches.

Vintage watches have undoubtedly been popular items to collect over the past decades. While owning these complicated timepieces from previous decades can be very satisfying, vintage watch collecting also entails a few dangers.

As we mentioned before, there are many counterfeit Longines watches out there. Also, even if a vintage watch you find is authentic, it might not work correctly, and its service costs might cost more than you paid for the watch itself.

That’s why you should only buy from reputable dealers that offer all the necessary information and plenty of photos. Additionally, you should do plenty of research on your own so you don’t get scammed.

In any case, go out there and look for some vintage Longines watches. You never know what hidden treasures you might find!