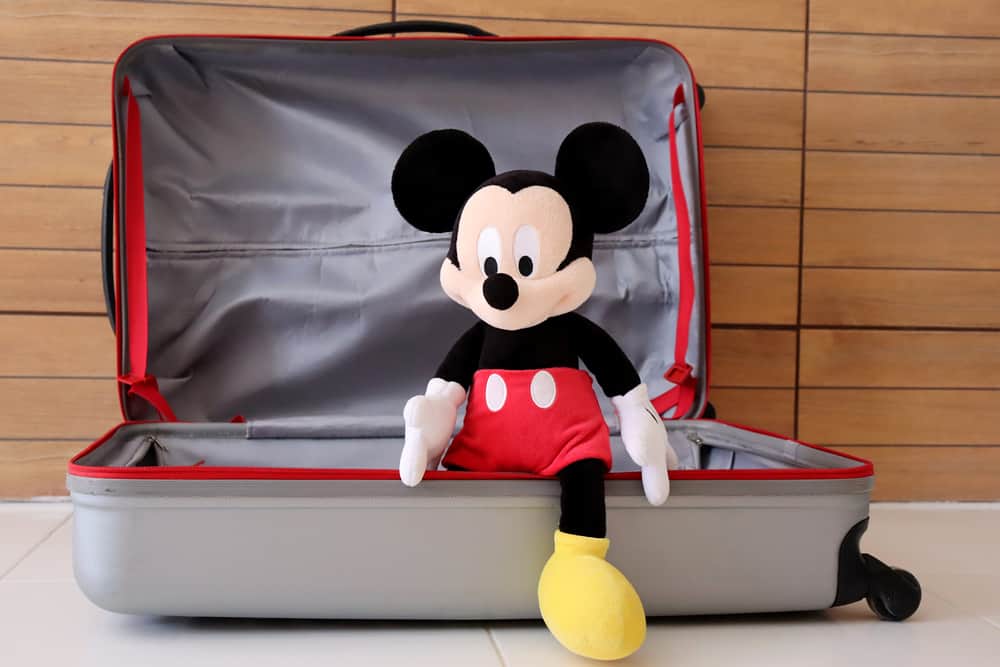 Mickey Mouse is the mascot of all our childhood. Can you believe it’s over a hundred years since his creation?

Throughout it all, Mickey has gone through several transformations. And with each new look or costume, a new collectible was born.

Today we’re going to focus on one of the most popular niches within Disney antiques – vintage Mickey Mouse stuffed animals. These beloved teddies attract huge interest from Disney fanatics and historians alike.

So if you’re a fan of Mickey Mouse, and your childhood teddy is gathering dust on a shelf, it’s time to see if the world’s most famous mouse can provide even more magic in your life – in the form of cash!

In 1930 Los Angeles, two years after Mickey Mouse’s debut in Steamboat Willie. Designer Charlotte Clarke designed what would be the first in a very long line of Mickey Mouse stuffed animals.

The early designs looked quite different from what our modern Mickey Mouse looks like today.

Clark was soon overwhelmed by the demand for the toys. The only way she could keep with supply was to develop sewing patterns that manufacturing companies could adapt and replicate.

Clark also developed patterns for Minnie Mouse, Donald Duck, Pluto, and more, setting the template for how the company could capitalize on popular films and Disney characters. With every new film came a plethora of even more merchandise.

However, Mickey Mouse was always the star of the show. To date, he has starred in over 130 films, several cartoon shows, comic strips, and video games. With each new appearance comes a new line of merchandise.

Hundreds if not thousands of stuffed animals exist, documenting every change. Every new film. Every new Disney event. Every new Mickey.

Disney stayed on the cusp of toy innovation and trends. They were also an advertising powerhouse, able to link Mickey Mouse with several other Disney brands and characters.

Here’s a quick run-through of some of the most significant events to take place:

First, let’s examine how it all started. The very first teddys made were primarily out of velvet and felt. These Mickey Mouse stuffed animals had very exaggerated proportions.

They also came with a rare stamp on their underside with’ Walt Disney’s Mickey Mouse Design Patent Applied For”, making them very easy to identify at auctions. 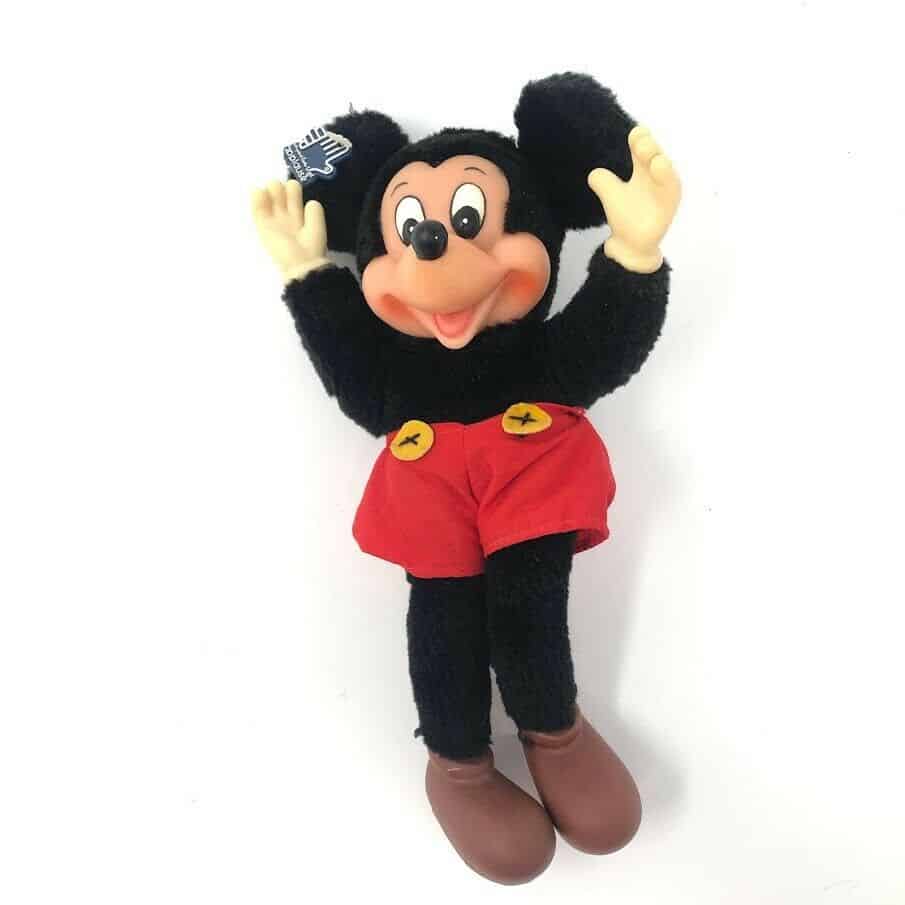 Rubber-faced stuffed animals became popular in the 1950s and 1960s. Molds were used to create a consistent doll head. It was at this time that Mickey began to slowly evolve into the character we know today.

He had big, bright eyes with exaggerated cheeks and his signature circle ears. He also wore red pants – a branding decision that remains to this day.

The Sorcerer’s Apprentice was released. In 1938, introduced a brand new look to Mickey. Designed by artist Frank Moore, this version of Mickey remains largely the same to this very day.

However, stuffed animals did not accurately reflect these changes until much later on. In truth, the toy world was slow to catch on to the changes seen by fans on-screen.

Some of the earliest editions of The Sorcerer’s Apprentice only feature from the 1980s, proving that antique Disney toys can be hard to date accurately. 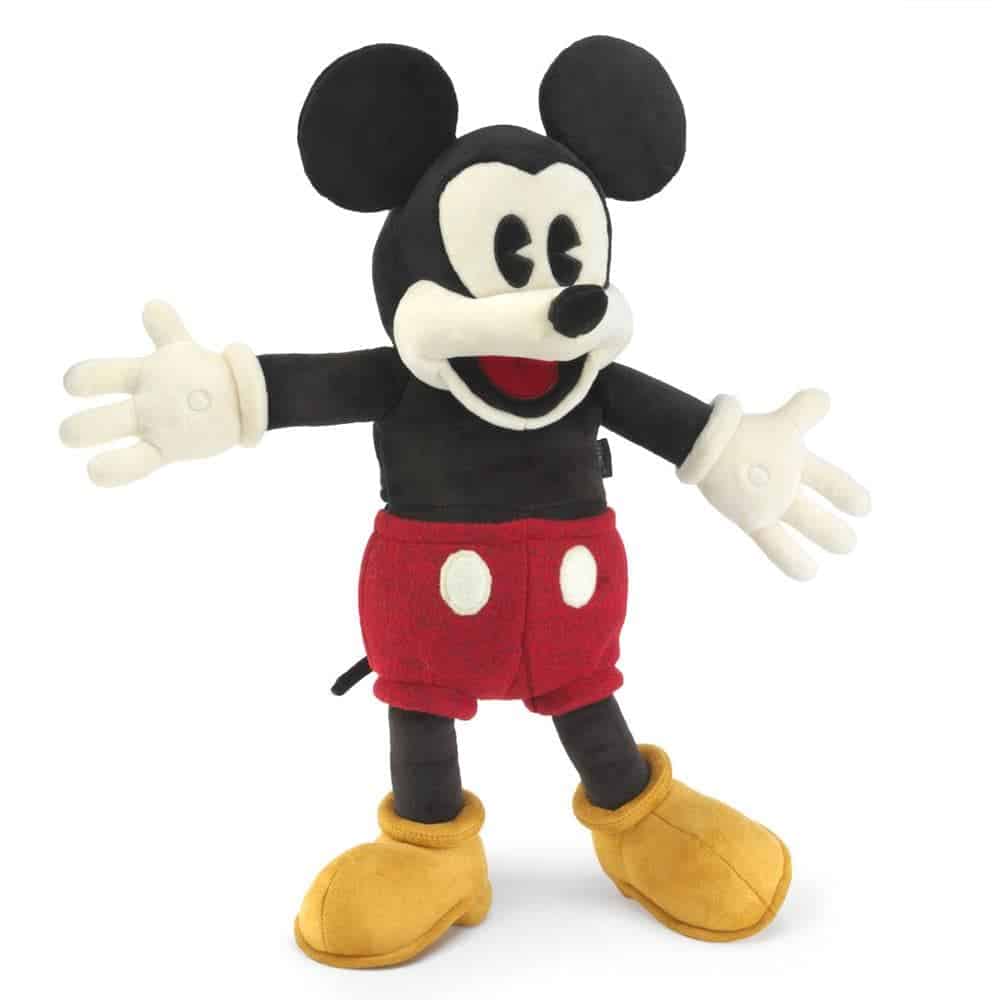 As the years went on, stuffed animals became more complex. Some acted as hand-puppets. Others had voice recordings and signaled a new ambition for Disney to be at the cusp of toy innovation.

These can vary in both style and type. Some cleverly revisit ‘past versions’ of Mickey Mouse, helping to tie together the mouse’s many looks and changes. Others help to cross-promote other Disney ventures, like their theme parks.

Plushies are now the modern term for stuffed animals and signal what’s in store for Mickey Mouse collectors.

Also Read  How Much Is a 2-Dollar Bill Worth? (History, Series & Value)

Plushies have celebrated everything from his many appearances in popular video games to feature-length films and more. Who knows – in many years to come, maybe these plushies will be antique collectibles?

How much is a Mickey Mouse stuffed animal worth?

Although Mickey Mouse stuffed animals have changed quite often throughout the years, they all share one thing in common – they are highly collectible.

And despite some of these teddies being in short supply, auction houses regularly host Disney sales- old Mickey merchandise is constantly being rediscovered.

So what can you expect from your vintage Mickey Mouse? Let’s consider the following;

Like any antique, the older the piece the more valuable it is. And this is true for everything Disney and Mickey Mouse related.

Early Mickey teddies are some of the most expensive antiques in the toy world.  If your Mickey doll dates close to Charlotte Clark’s work back in 1930, you should start celebrating now. These often go on sale for upwards of $2,300.

Toy antiques have one weakness – damage. Many kids would have played with stuffed animals extensively. Sadly, this can result in damage, including rips, tears, discoloration, or missing parts.

Ensure Mickey has all the listed clothing and accessories relevant to the model. This Rubber-face vintage Mickey Mouse has increased value because the teddy is in pristine condition with tags still attached.

The 1986 Mickey Mouse was one of many battery-operated stuffed toys from Disney. It had several; catchphrases programmed to speak with a simple press of a button.

However, virtually all of these editions have suffered corrosion damage over the years and require extensive repairs. Unless fixed, they will sell for a reduced price because of the damage.

Mickey, Minnie, and the rest

Although Mickey Mouse is undoubtedly the star in the antique toy world, he did have a wide cast of supporting characters that Disney took interest in.

While Mickey can sell perfectly fine on his own, selling him with other characters may increase their collective value. E.g.:

Did you know that even modern Mickey Mouse stuffed animals that are being sold in shops right now are becoming incredibly valuable? If they’re limited-edition, that is.

This 50th anniversary Space Mountain Mickey Mouse is worth $160 despite being sold in 2022.

Antique expert, Dr. Lori insists that Disney toys will always remain valuable, and will increase in value gradually over time. That’s because antique toys are an ‘emotional buy’, where we spend large amounts of money to try and recapture childhood memories.

If you’re unhappy with the current market price – all you have to do is wait just a little bit longer. Sooner or later a Mickey Mouse enthusiast will see your specific edition and pay anything to get their hands on it!

Where can you buy and sell vintage Mickey Mouse stuffed animals？

Whether you want to revisit childhood memories, or want to start an antique toy collection, there are several ways to go about buying, selling, and trading Vintage Mickey Mouse memorabilia.

Disney is everywhere – and most retail stores will sell some sort of Mickey Mouse plushie or teddy. But if you’re looking for vintage editions to start your collection off, you should look at some overlooked areas like:

Because of the sheer amount of Disney fanatics out there, selling Mickey Mouse teddies is very straightforward.

The most popular way to sell any toy antique is through online websites. The three we recommend you check out include: