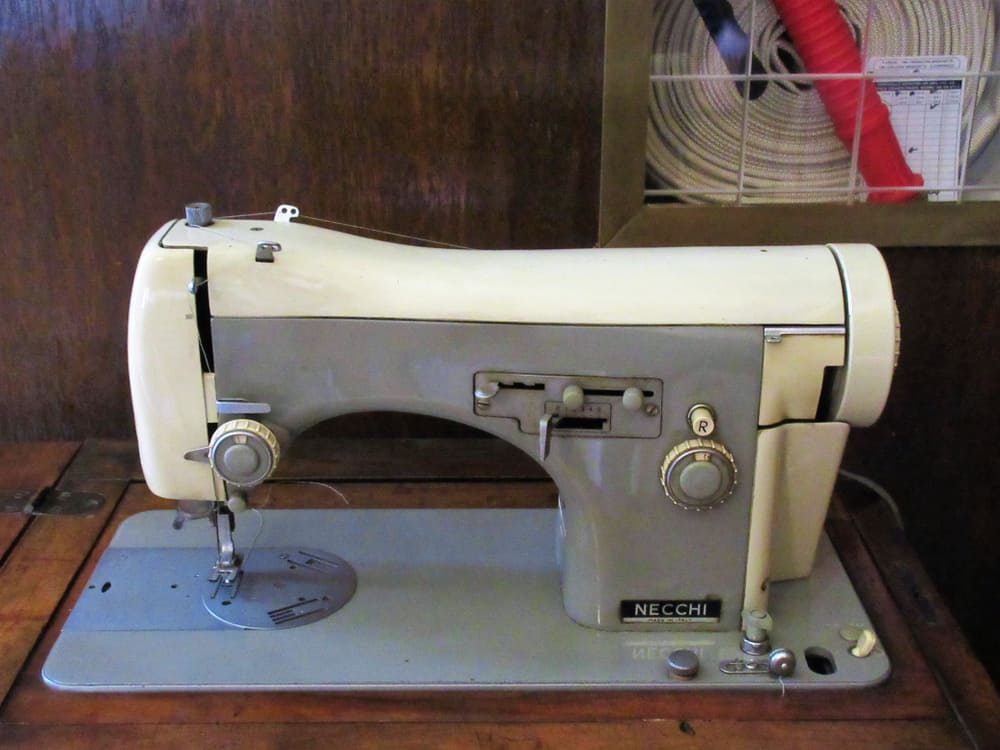 Necchi is a legendary brand of sewing machines that are being produced to this day. However, many seamstresses and tailors swear that vintage Necchi models are much superior to their modern counterparts.

In this article, we’re going to cover everything you need to know about vintage Necchi sewing machines, from their history and models to tips that will help you date and evaluate them.

The first Necchi sewing machine was made in 1924 by an Italian Vittorio Necchi. His father owned a cast iron foundry, so Vittorio had all the tools and resources necessary to make a sewing machine himself.

However, the story of why he decided to make a sewing machine is more than fascinating. Vittorio Necchi served in World War I, and with things finally looking calm after the war, his wife wanted to pick up sewing.

Several companies, including Singer and White, already manufactured sewing machines on a large scale. However, Vittorio thought that he can improve on their designs and make something better for his wife to use.

Or, you know, he didn’t want to spend a fortune on a machine that his wife might get bored of after a month or two. Regardless of the real reason, Vittorio went to his father’s foundry and started tinkering for years until 1924, when he finally created the first Necchi sewing machine.

It was so good that the word quickly spread and Necchi was manufacturing almost 20,000 sewing machines every year in the 1930s. The rest is history, and today Necchi is producing 16 different models of sewing machines. However, what were their vintage models?

Through nearly an entire century of manufacturing, Necchi has made dozens of different sewing machine models. However, some of the most notable vintage Necchi sewing machines are as follows:

This was the third Necchi model ever created, and the first sewing machine made in Europe that could do zigzag stitches. It allowed Necchi BU to be used for sewing buttonholes or even making decorative stitches.

Such versatility was essentially never seen before, and it made Necchi BU one of the most successful sewing machines of all time. It was manufactured for over two decades until it was reborn in a new model called Necchi Mira BU.

The first of the “Mira” series, Mira BF was made in 1950 and didn’t have any outstanding features that revolutionized sewing at home. However, it could boast of its slick and durable design.

Basically, Necchi Mira BF could do one thing – straight stitches but could do it flawlessly and better than most other sewing machines of its day. It made this model relatively popular in the 1950s, and it’s still a good vintage machine to buy today.

This model was one of the first sewing machines with insertable cams. This feature alone exponentially increased the machine’s versatility from simply making straight or zigzag stitches to dozens of other stitches.’

Nora 514 came in gray or pink variations, and it’s one of the most sought-after Necchi models today, despite its initial manufacturing run lasting for just 4 years in the late 1950s.

This model was made from the early 1960s until the 1970s, and it came with a revolutionary “Micro-Electro Control” feature, which would stop the machine after it had finished sewing a buttonhole.

It also had insertable cams, making it a versatile machine and one of the best design words in Necchi’s catalog. Finally, Supernova Julia was simply a beautiful machine.

This model came in a lavender color which passed the test of time and today it’s as attractive as it was in the 1960s.

How to Date a Vintage Necchi Sewing Machine?

If you’ve identified the model of your Necchi sewing machine, it’s relatively easy to date it and figure out when it was made. Necchi produced each model just for several years in a specific time frame.

For example, BF Mira was manufactured for a single year (1950), while BU was made for over 2 decades (1932 to 1953). Here’s a list of the majority of vintage sewing machine models that were manufactured by Necchi and when they were made:

Honestly, the easiest way is just to contact Necchi directly and they’ll be more than happy to help you date a vintage Necchi sewing machine. Include as much information about the one you have and they’ll probably follow up with more questions to help you date it accurately.

Is an Old Necchi Sewing Machine Worth Anything?

There are several main factors influencing the value of an old Necchi sewing machine:

There’s a rule of thumb that applies to all antique and vintage items: the older the item, the more valuable it is. The same applies to Necchi sewing machines, and older models are almost always going to be more expensive than newer ones.

Another important factor influencing the value of an old Necchi sewing machine is its condition. While most people don’t buy them for collecting, the appearance is still important.

Necchi sewing machines with scratches, dents, and cracks are always going to be valued less than those in pristine condition.

Briefly, the rarer the model, the more expensive it’s going to be. There’s also a caveat of a specific Necchi sewing machine having its own history and important background.

For example, if it was used by a famous fashion designer, its value could be a hundred-fold bigger than the value of an exactly same machine that doesn’t have such a backstory.

As a result, machines in working order that can be used right after being purchased are going to be more valuable than those which need repairs.

Now we can take a look at some vintage Necchi sewing machines that were bought in 2022, so you can get an idea of how much you can sell yours, or how much you should expect to spend when buying one yourself:

This is the most expensive vintage Necchi sewing machine sold on eBay in 2022. Such a price is a result of several factors, including its condition, functionality, and accessories.

For starters, while this machine was used, it didn’t have any scratches, marks, or any other sort of visible damage. Then, it was in working order and didn’t require any additional repairs.

Most importantly, it came with many accessories. It had a total of 28 cams, including 14 mix-and-match cams, 13 pre-set cams for decorative stitches, and a single buttonhole cam.

Finally, this listing came with bobbins, brush, ripper, case, and several presser feet, including ruffler and binder feet. All of these things made it sell for over $550.

This listing offered one of the earliest models of vintage Necchi sewing machines but didn’t mention the specific date of production. However, Necchi BU models were made from 1932 to 1953, so it’s vintage to its core.

It came with a case, pedal, and other accessories, but the seller didn’t mention exactly what kind of accessories there were. However, from the pictures, we can see many cams and bobbins, so it was probably a full set.

Despite being old, in working order, and coming with many accessories, it sold for just $199. There are many similar listings online, so you can buy a similar machine for anywhere between $150 and $250.

Lycia 522 model was made only in 1955, making this sewing machine nearly 70 years old. This listing offered a machine with visible damage like scratches and said that the machine turns on but wasn’t tested practically.

So with functionality in question and the lack of accessories besides a case cover, it sold for just $99.99. However, you can find many older Necchi machines that are perfectly functional for similar prices.