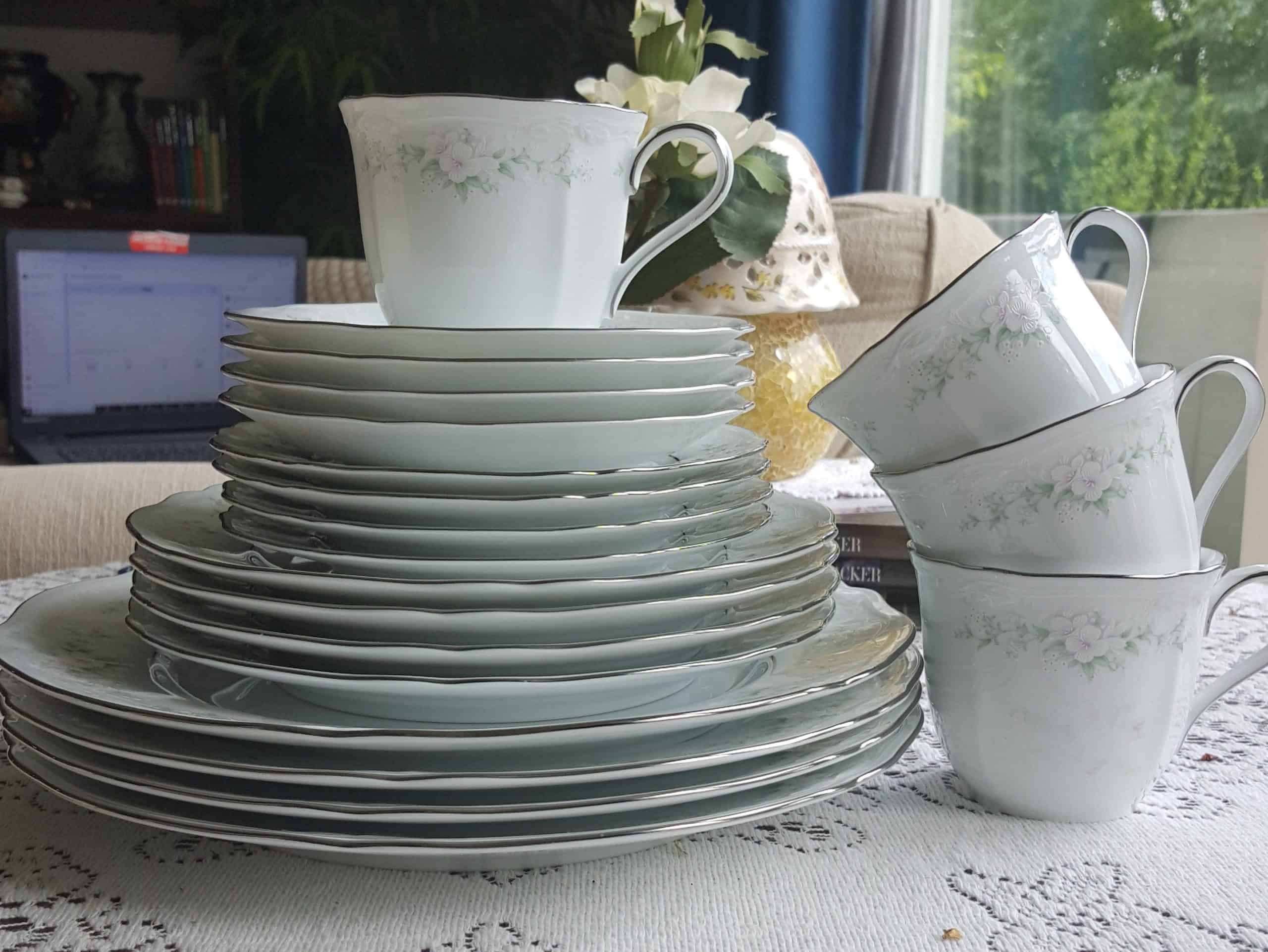 Do you love vintage china patterns with gold trim? If you do, then you’re in luck! There are many different beautiful patterns available to collectors.

This guide will provide an overview of some of the most popular vintage Noritake china patterns with gold trim, as well as tips on how to identify them.

Noritake china has its roots in 1876. The company was called Morimura Brothers, set in New York City by brothers Ichizaemon and Toyo. While they sold Asian art and antiques, they were looking for ways to branch out, and in 1889, everything changed for them during a trip to Paris, France.

Morimura encountered French porcelain there, and he was so inspired by it that he came home and studied manufacturing. Then in 1904, he opened a factory in Japan called Nippon Toki Kaisha Ltd, and by 1914, the brothers had released their first Western-style dinner set.

It wouldn’t take long before the fine china craze began.

During the Great Depression and World War II, production from the Noritake company was hindered. However, the company continued to produce china, and its products became popular worldwide.

The pieces that are most valuable are those that were produced in the early years and during the war and depression. This is because they didn’t produce many pieces during these eras, so there is a limited supply. They are in high demand by collectors.

The company is still around today, now called Noritake Co., Limited, and producing beautiful china just as they always have.

How Can You Tell If Noritake China is Real?

Noritake china is known for its unique use of color, pattern, and design, which are beautifully hand-painted on each piece. The admired antique dinnerware has lovely, colorful patterns on a variety of tableware and serving ware, including plates, teapots, serving trays, and vases, to name a few.

But if you’re looking to purchase vintage Noritake china, it’s important to make sure that what you’re buying is real. There are a few ways that you can tell:

Noritake china should have a distinct backstamp. This is a stamp on the bottom of the dinnerware that indicates it’s from the Noritake company. There are a few different marks, used in different eras of the company, so your piece’s backstamp should also help you identify about when the china was made.

The backstamp should include a four-digit number (or more) called a pattern mark or pattern number. Not every vintage piece has a number, but if they do, they’ve all been recorded in a Noritake directory since 1904.

If you’re not sure about a piece, do some research online. There are many different ways to identify vintage Noritake china, and many collectors have catalogued information online. Peruse what you can in order to help you identify if your pieces are real.

There are many different vintage Noritake china patterns with gold trim available to collectors. If you’re interested in adding one of these patterns to your collection, be sure to look for the Noritake stamp on the bottom of the dinnerware. As we mentioned before, this is how you can be sure you are getting a genuine piece of vintage Noritake china.

One of the most popular patterns from Noritake, Azalea features beautiful pink painted flowers just as the name suggests. The flowers sit on sea green leaves and a white background with gold detailing around the edges of the handles and the rim. Generally, these large flowers lace the edges of the dish, rather than covering the whole base.

This elegant pattern was used on a wide variety of dishes–plates, saucers, teapots, tables sets, and even children’s pieces. It was only sold through a catalog put out by the Larkin Company of Buffalo, New York, giving the pattern an exclusivity for club members.

While there is some discrepancies online of when this pattern was produced, it’s safe to say that it was somewhere around 1918 to around 1930. It’s still highly collected, and the rarest pieces to watch for at the pancake jug, the 15-piece child’s set, the china ashtray, and the bulbous vase.

When it comes to this pattern, you could spend up to $600 per item, depending on its scarcity. Small bowls and plates will likely sell for about $25 each.

The Juanita pattern is one of the most popular and sought-after vintage Noritake china patterns. It features a beautiful chain of tiny yellow, pink, and blue flowers on a tan strip that runs the entire edge of each dinnerware piece. The tan strip sits atop a white background–and of course, each piece is trimmed with a beautiful gold rim.

The discontinued pattern was first introduced around 1921.

This particular vintage pattern is fairly sought after, so it can cost anywhere from $8 for a sauce bowl to even $200 per other pieces.

The N19 pattern is a rare but beautiful vintage Noritake china pattern. It has a white background with a cluster of dark pick flowers on green leaves as the center design. The dinnerware pieces are all rimmed with two bands of gold.

This particular floral pattern is discontinued and was produced around 1933.

This pattern is fairly rare and goes for anywhere between $9 a salad plate to $13 for a replacement sugar bowl lid, which all adds up if you’re looking to acquire or sell an entire collection.

This pattern is also a rare and discontinued pattern, originally produced around 1933.

On each piece, you’ll find a fairly detailed design on a white background. Along the lacy gold rim, there are anchor points of gold filigree. Closer to the center of each piece, clusters of pink flowers and foliage dot the background, and in the center, you’ll see a delicate floral wreath.

These pieces can sell for between $30 and $250, depending on the piece.

The especially lovely Noritake Ramona pattern has a softness to the pattern, displaying small blue flowers on sea green leaves in a floral wreath around the edging of each dinnerware piece. The wreath is framed between two bands of gold.

A set of these elegant fine chinaware would be beautiful on display in a china cabinet and can sell for $16 for a creamer to $18 for a gravy boat and $70 or more for larger dinner pieces.

The Romance pattern is another beautiful floral wreath pattern just like the Ramona. The interesting thing about this pattern is that there are actually two patterns with this name.

One of the two Romance patterns shows very muted pink and blue flowers on beds of sage green leaves. This wreath also is framed between two bands of gold along the edge of each dinnerware piece.

This is a sought after pattern when it comes to fine-china decor products, bringing in anywhere from over $250 a 45-piece set.

The other version of this pattern displays clusters of small blue, dark pink, and light pink flowers on dark green leaves, dotting a band of tan around the perimeter of white china.

This collectable Noritake pattern can bring in around $600 for a 100-piece set.

Brunswick is a stunning floral pattern of dusty rose flowers and sage green foliage circling the rim on a white background.

This pattern (5410) was produced from 1953 to 1960, so it isn’t as old as the other Noritake patterns we’ve covered so far. A 91-piece set sold for $175 on an auction site, and in other places, pieces of this beautiful dinnerware collection are selling for $20 a dinner plate or more for larger pieces that are in good condition.

Tree in the Meadow

This amazing pattern is completely different from the floral designs previously discussed in this article. Painted and sold in the early 1900s, Tree in the Meadow (or also called House by the Lake) was a popular pattern for consumers.

The pale yellow dinnerware pieces display a striking orange sunset over a mountainous horizon, serene lake, and soft brown trees on a shoreline of green grass. They really are an amazing plate to behold!

You can find this pattern on all sorts of fine chinaware, including but not limited to plates, bowls, jam jars, waffle sets, and butter dishes. You can purchase many of these pieces for around $20, but some pieces that are scarce and in excellent condition can sell for over $100.

The soft Dover pattern would look lovely displayed in a home for all to see and enjoy. Each piece’s edging is adorned with small blue flowers atop an evenly patterned bed of faint gray filigree scrolls.

It is a discontinued vintage pattern that was produced from 1955 to 1960, and it sells online for anywhere from about $7 to $70 or more for good quality pieces.

The Goldart pattern is extremely simple and stately, designed to be a single gold band of trim, followed by a second gold band thinly ringing the perimeter of each dinner piece, closer toward the piece’s center.

Clean and timeless, the Goldart pattern was produced from 1952 to 1962 and can bring in anywhere from $8 to $30 or more per piece.

The 1930s Goldcella pattern was an elegantly ornate pattern that could add a regal air to any home.

With an interesting combination of round and square plates, among other beautiful dinnerware, Goldcella is rare and worth quite a lot of money. It can sell for even into the thousands for a large unused set.

Harvester is a fun spin off of the traditional floral wreath pattern. Instead of displaying flowers and filigree around the perimeter of each piece, it sprawls flowing strands of wheat and grass. The colors are soft and muted, making it an appealing pattern for many types of collectors.

This discontinued pattern was used between 1954 and 1959, so only a handful of years! Each piece will vary in price, but they tend to go for around $8 to $10 for the basic bowl or plate. Larger, more interesting pieces in the set would sell for more.

The Janice pattern is a sprawling pattern of gentle gold flowers, sea green vines, and gray leaves. It was also a pattern that wasn’t produced for very long–only from 1957 to 1961.

Elegant and reminiscent of Victorian art, these pieces tend to sell for pretty good prices, between $7 and over $60 per piece.

Produced in the 1970s, the Noritake Maytone pattern displays an Art Nouveau feel that the other fine chinaware patterns in this article don’t. Based on a white background, the pattern shows a gold filigree wreath along each piece’s edge. Small blue flowers occasionally dot the filigree for a touch of color.

A medium sized set of Maytone (2359) dishes could set on places like Ebay for around $200 or more.

Produced at the very beginning of the 1900s, the beautiful pattern called Paisley (69543) is a detailed pattern that also manages to hold onto simplicity.

The gold trimmed edging is an Art Nouveau woven-esque pattern while blue, red, and yellow flowers cluster together on gray flowers surrounding the center of each dinnerware piece. In the center, you’ll find a beautiful meadowlike vignette of the same flowers growing around a gold bowl of fruit.

These pieces can go for anywhere from $35 for a pair of teacups and saucers to even $40 for a single dinner plate!

All in all, vintage Noritake china patterns with gold trim are definitely beautiful and collectible! If you’re ever interested in adding some of these stunning pieces to your own home, be sure to do your research ahead of time so you know what you’re purchasing. Then, enjoy your fine chinaware for years to come!

Which is your favorite Noritake china pattern? Let us know in the comments!