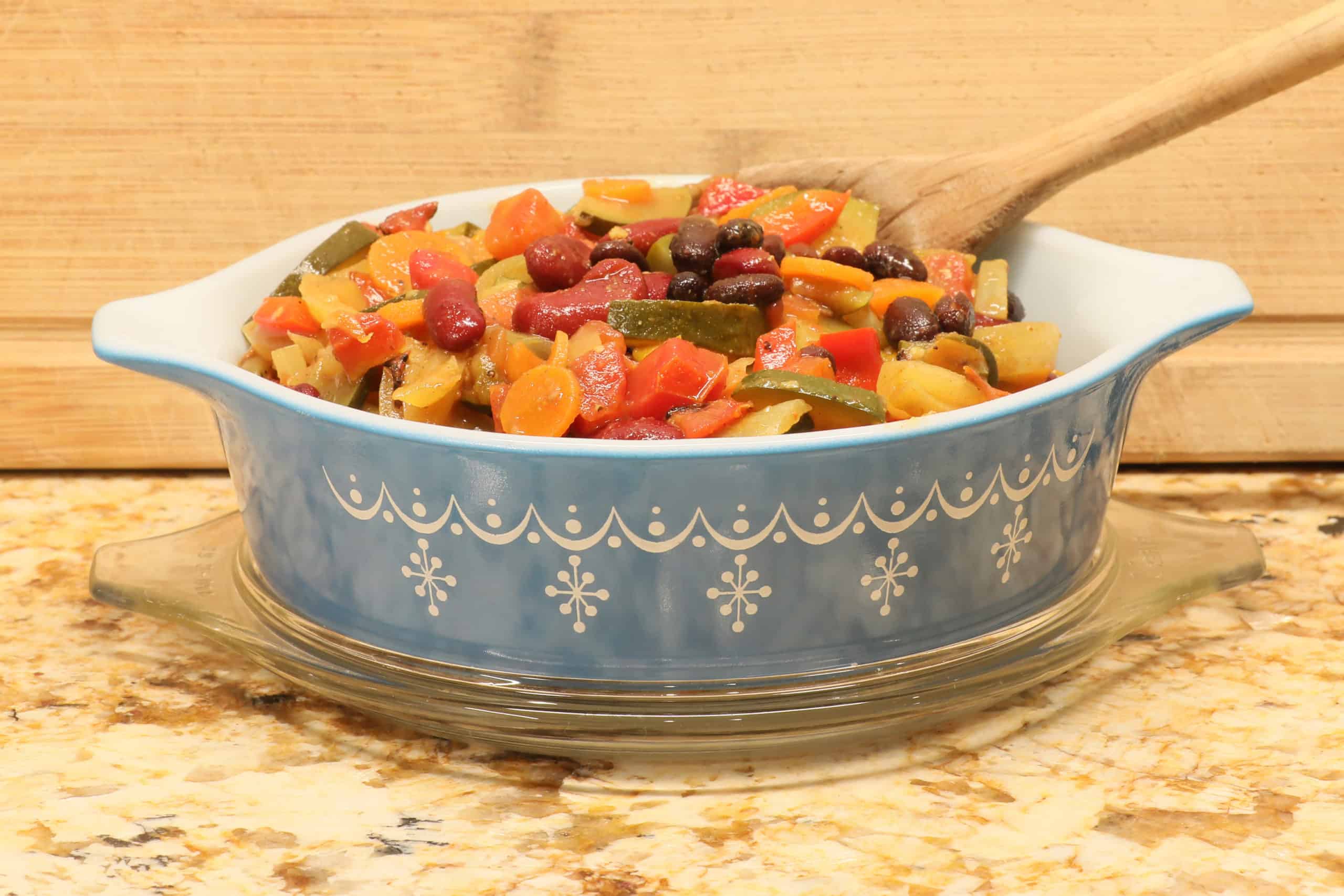 Have you ever wondered how to differentiate vintage pyrex from the newer-times imitations? Apart from maintaining their durability, elegance, and excellent quality, vintage pyrex becomes more valuable with time. Also, if you love using luxurious glass cookware, you might want to know how to collect real deals.

Vintage Pyrex, which came from borosilicate glass, has been adding a touch of luxe, class, and sophistication to everyday meal prep and servings since 1915. In addition, the quality of these beauties stays intact with century-long multiple heat-versed uses.

Corning Glass Works produced clear pyrex glassware until the mid-1940s when they introduced patterns, colors, and casserole dishes into their collection. The Hot ‘N’ Cold Chip and Dip Set with the metal bracket set the pace. Here are some of the leading patterns;

This pattern derives its name from its resemblance to a unicellular organism known as Amoeba. Some people liken its shape to a flower with five or six petals. The Amoeba’s pattern petal colors are a blend of brown and white on a white dish background.

Between 1945 and 1949, Corning Glass Works collaborated with the U.S. government to make Pyrex dishes which they painted primary colors. These were yellow, red, blue, and green. The primary colors bowls which went for $2.50, became the first Pyrex opal ware ever to be produced.

In the collaboration, the U.S. government wanted to make substantial, light, and unbreakable dishes for its soldiers during WW2. During this period, the color bowl or dish set had no standard model numbers.

Corning Glass Works released Lucky in Love as a limited piece or a test piece in 1959. This pattern comprises green glass plus clovers over a white background going through the side base.

These patterns came in around the mid-1950s and continued until the late 1960s. Snowflakes came in two colors, with white snowflakes drawn over black or turquoise Pyrex bowls.

Pink Daisy and Snowflake became the first patterned dishes released with the new screen-printing method. The company advertised these two as the new Pyrex decorator casserole. One of their selling points was that their covers were clear and could be versatile.

In 1972, the company introduced a new pattern known as Snowflake Blue or Garland. This unique design had dots plus swags, imitating a garland.

This pattern was introduced in 1957 and continued until 1968 to cater to the growing demand for turquoise on white and white on turquoise Amish print. Butterprint was among the pioneer patterns under the Cinderella Bowls, with huge nested mixing bowls with handles or spouts.

Other colors were orange and pink.

The gooseberry pattern came in 1957 and went on until 1966. It came in different colors: pink stems on white, black on white, black on yellow, white on pink, and promotional gold on beige. This pattern was also part of the Cinderella bowl collection.

Corning Glass Works manufactured the compass pattern in 1957. This white oval-divided baking dish had black compass patterns or starbursts on it. In addition, it came with a brass carrier.

Corning Glassworks introduced the town and country pattern in 1963 to cater to the rising need for mix and match kitchenware trends. This decoration comprised star-shaped abstract features with patterns such as brown on white and orange on white.

This pattern was introduced in the late 1960s and went on until 1973, making it one of the oldest pyrex opal glass markings. The colors include blue dots on white, orange in white, yellow on white, and red on white. The company introduced the green dots in 1969.

Autumn harvest, which came in 1979, became the last pattern on refrigerator dishes before it became discontinued. It featured ivory on orange or rust backgrounds. One year prior, the company added a promotional ‘wheat’ design of tan on the brown color scheme.

All productions of opal pyrex were stopped in 1986, bringing to an end the autumn wheat pattern.

What Do the Numbers on Vintage Pyrex Bowls Mean?

The numbers on vintage pyrex show the size in pints of each baking bowl. For example, #043 is one and half quartz, which equals 3 pints.

Also, the model numbers on round Cinderella casserole lids are differentiated with regard to how clear they were. Clear covers had 470C, 474C, and 475C. On the other hand, 20C, 24C, and 25C were for opal lids.

How to Tell If Pyrex is Vintage?

Check the following features to tell if pyrex is vintage;

Inspect your pyrex piece while paying attention to any chips, glass markings, stamps, or logos. Ancient pyrex has markings at the bottom of glass pieces. Also, it should have the word ‘PYREX’ in a circle with the company’s logo, C.G., standing for Corning Glassworks.

However, the circle format ended, and straight lines replaced it in the 1960s. Also, pyrex manufactured around the mid-1950s had a ‘MADE IN THE U.S.A.’ and a trademark symbol or wording. The earlier productions also had a tiny figure blowing glass included in their stamps.

Some casserole bowls and dishes have inventory numbers stamped at the bottom. You can use the sequence and model numbers to tell their years of manufacture.

Pyrex pieces made between 1915 and the mid-1940s were of clear glass. The pastel and primary colors came in from around the mid-1940s to 1950 before introducing patterns.

If you cannot authenticate vintage Pyrex opal glass using the methods above, talk to a professional specializing in them or reach out to collectors. You can visit a glass kitchenware antique shop in your area and consult them.

The rise in demand for vintage pyrex pieces in recent years has caused the prices of such vintage beauties to rise. Also, it has made owners and collectors hold back these pieces looking to mint profits from them soon.

Still, the prices of vintage pyrex pieces vary due to availability, sentimental value on the seller’s part, patterns, and their conditions. If you are lucky, you can cop some vintage pyrex for as low as $30. Contrarily, some cost up to $4,000.

Here are the main vintage pyrex pieces and their prices in the market today;

How Can You Tell Old Pyrex from New Pyrex?

The best way to tell old pyrex from new pyrex is by checking the markings or chips on each piece. You will find the oldest pyrex markings like ‘PYREX’ and ‘CG’ in capital letters in a circle at the bottom of each mixing-bowl. The circle got discontinued in the 1960s, with straight lines replacing it.

Therefore, if you find pyrex with markings over straight lines at the bottom, there is a higher chance that the company produced it after the 1960s.

Another way to tell old pyrex from new ones is by checking the colors and patterns. If you come across clear glass pyrex pieces, it shows that they produced them between 1915 and the mid-1940s. Plain pastel and primary-colored pyrex pieces followed suit until the 1950s, whereas patterns continued until the late 1980s.

Is Vintage Pyrex Safe to Use?

Old pyrex pieces, which came in clear glass form, contain no lead, making them safe to use. On the other hand, there are vintage pyrex pieces painted in colors with high lead levels.

While it is only the outer part of the collector’s item that contains lead, you should be careful when collecting cracked vintage pyrex pieces. When you cook using these pieces, the lead may seep through and end up in food meant for consumption, posing a severe health risk.

They are safe if you are collecting vintage pyrex pieces purely for sentimental value and aesthetic and decorative purposes. Also, note that they are not dishwasher safe. All in all, prioritize your health and those around you by checking for paintings and crack lines before use.

How to Find Vintage Pyrex?

Alternatively, you can talk to vintage pyrex collectors to guide you on how you can find them. If they are willing to sell some pieces to you, let them.

When collecting vintage pyrex, check for markings such as paintworks, chips, color, and logo at the bottom of the dish to determine how old they are. Still, some vintage pieces may not have such markings. In such cases, seek professional help from vintage pyrex experts to avoid buying fakes.