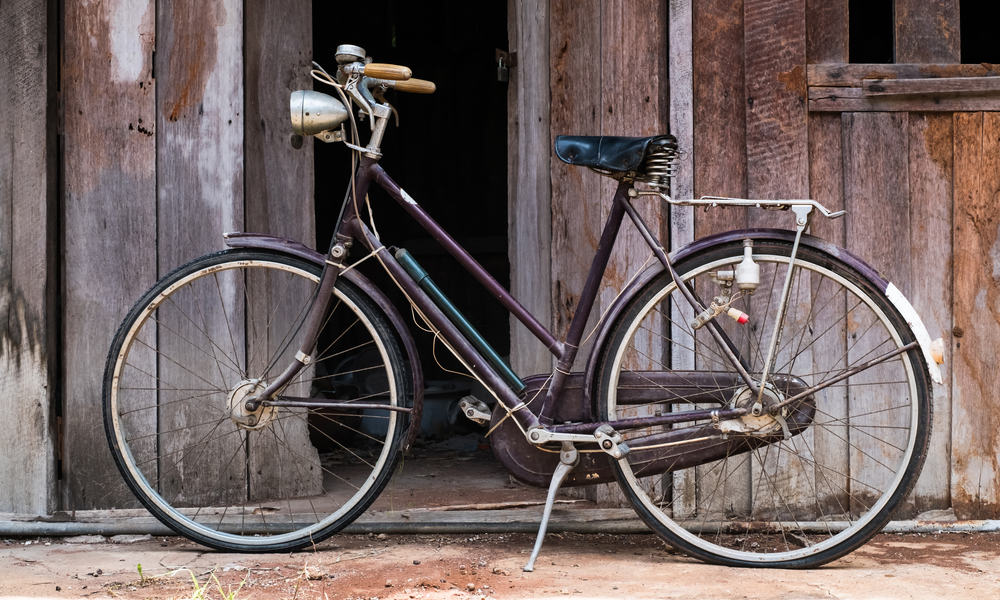 Raleigh is one of the oldest, most appreciated cycling brands globally and the leading bike manufacturer in the UK during the 1970s and the 1980s. Their high-quality bikes were practical, durable, and beautiful. Owning one of their older models is the ultimate experience for most bikers, so you should consider buying one if you enjoy this sport.

The vintage Raleigh bikes value depends on the model, condition, and production year. Be careful when checking the model you are interested in since determining the Raleigh bicycle age can be challenging. 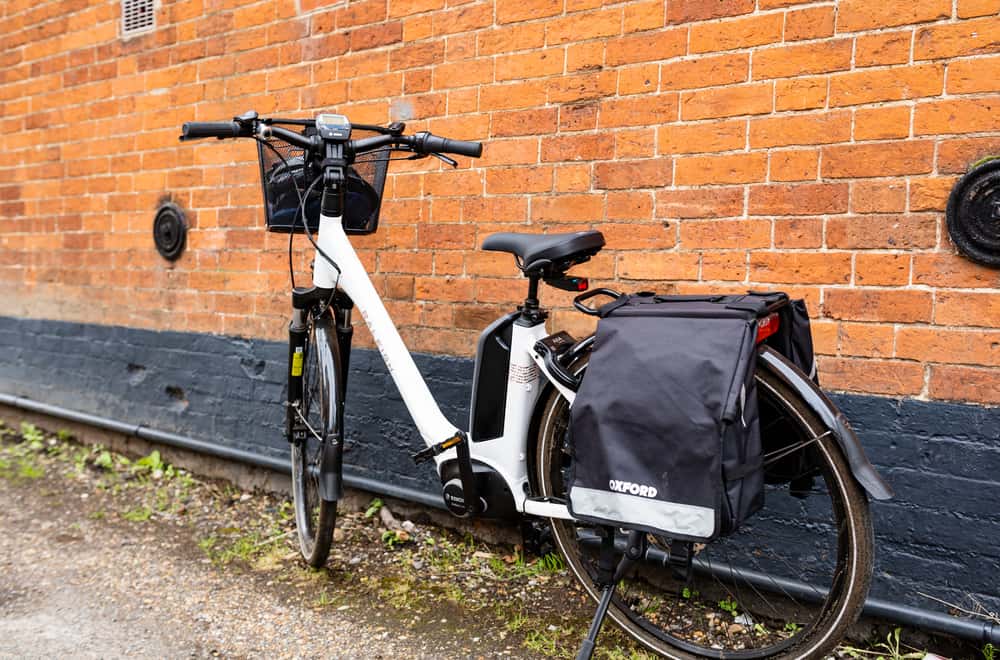 The Raleigh company is among the oldest global cycling brands and is famous for its impressive racing heritage. The story began in 1887 when Frank Bowden bought a small bicycle shop in Nottingham, England.

Thanks to increased demand, he soon founded a factory and showed 23 beautiful new bike designs at the Stanley Cycle Show in 1890. During the next few decades, this company perfected several crucial parts, including:

These innovations made this brand the most respected in the UK. By many criteria, their bikes were the best in the world in the 1970s and 1980s. 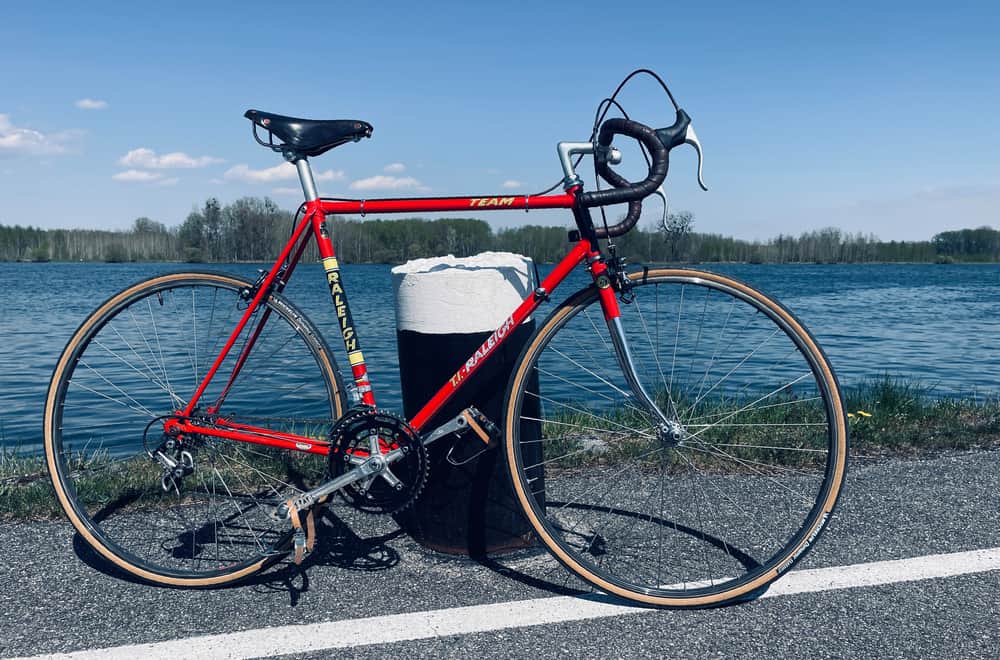 On average, vintage Raleigh bicycles’ value on the current market is several hundred dollars. As always, the most expensive are models in working order and with all original components.

Interestingly, smaller-framed women’s and children’s bikes from the same manufacturer will be significantly cheaper because of lower demand.

Unlike other antiques, vintage bicycles have fewer collectors, but people buy them because of their quality, durability, and beauty. Plus, many men are nostalgic and want their kids to ride the same models they had when they were young.

The most appreciated Raleigh’s vintage models are working bikes with adult-sized frames and multiple speeds, regardless of the budget. As you can guess, this nostalgic generation typically looks for bikes produced in the 1970s and 1980s. In most cases, only dedicated collectors want models from the immediate post-war period.

There is one more thing! The shape and technology of bikes manufactured in the second half of the 20th century resemble the modern models. Therefore, it is possible to transform them into contemporary recreational items with a vintage vibe.

You can quickly find most models in decent condition for approximately $150. However, those in original condition without service work for decades are typically worth only $80. The final price will depend on necessary repairs and parts that require replacement or repair.

Be aware that you need to set aside $200 to $500 for a reconditioned Raleigh bicycle. On the other side, some collectible pieces can reach up to $3,000 at auctions.

The vintage Raleigh bicycle value is what a collector or any other buyer is prepared to pay for it. Since collector interest often varies, depending on current trends, you should understand the crucial attributes that affect each model’s price.

The rule of thumb is that hand-built bicycles with high-end components this company produced before the 1980s are always of higher value.

In other words, the tenth grade equals a mint original, while the grade one indicates worthless, typically broken, and damaged bicycles.

However, some collectors look for these pieces, mainly when they come with original paint and decals. They can be a valuable source of original parts.

Finally, be careful with restored bikes. Many collectors appreciate patina, so every repairing or repainting significantly reduces a vintage bicycle’s cost. Paradoxically, a perfectly restored model often costs like the same bike in original condition with scratches, meaning you will lose the money spent on the material.

Collectors like branded bicycles, so you can be sure they will appreciate models with a famous manufacturer’s mark.

The fact is that collectors prefer some vintage Raleigh bicycle types more than others. Therefore, you will pay more for:

Collectors will also look for bikes with deluxe and unique features and those containing bells and whistles. Finally, never underestimate the color of a vintage bike!

Typically, collectible men’s bikes, including vintage Raleigh bicycles, are more sought after. Therefore, they are worth more than women’s models. The reason is the higher number of male collectors and their nostalgia for bikes used during childhood.

Vintage Raleigh bicycles with historical significance always come with a higher price. For instance, celebrities who use a particular model will make it famous and more costly. Some pieces are a part of well-known riders’ collections, making them valuable.

There is one more interesting fact! The purchaser’s nationality often impacts the particular model and brand’s popularity. In other words, demand for vintage Raleigh bicycles will be different in the UK, the US, and other countries in Europe. 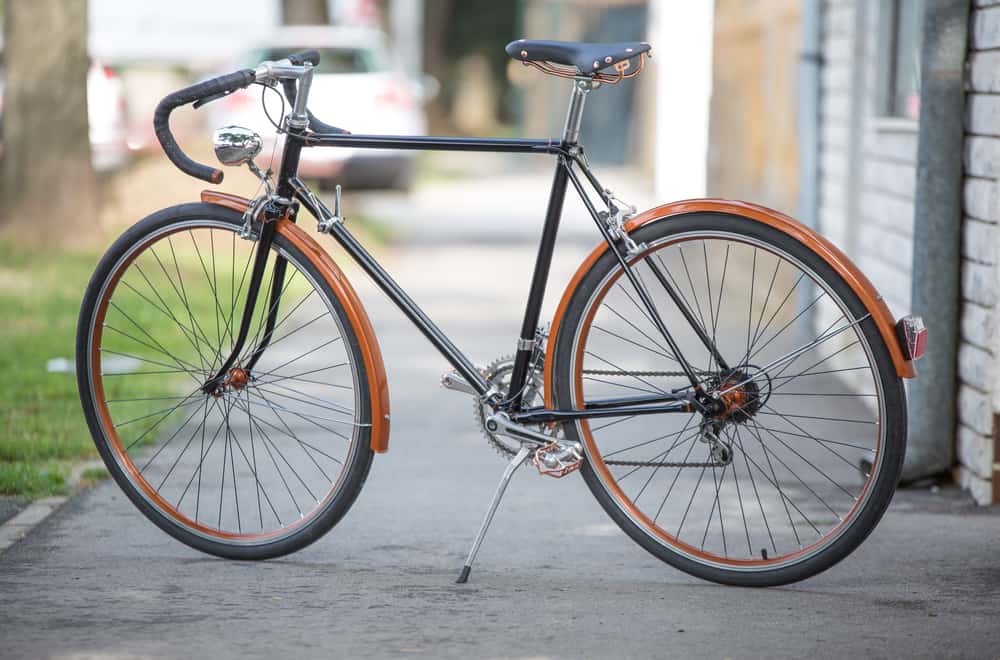 One of the crucial things you need to determine is the vintage Raleigh bicycle production year. Since this company has produced bikes for over a century, you can find thousands of them on the market.

The only way to determine their age is by a few typical features characteristic of each model.

The first thing to look for when determining the Raleigh bike age is a serial number stamped during the production. Most Raleigh bikes have the production year and model on the bottom bracket, under the seat, on the seat lug front, or its side part.

It is the quickest way to check necessary data, but be aware that you can find a bike with replaced parts. In that case, the serial number can mislead you.

The excellent thing is that Raleigh has a specific way of putting serial numbers on their bikes. Once you know how to read them, determining the production year will be a piece of cake.

The company used six digits and the letter P or T in serial numbers in this early period. If you notice the letter P, you can be sure that the bike was manufactured until 1950.

From the mid-1950s, Raleigh used the letter T. The only exception was bikes produced in 1948. They were marked with 4 or 5 digits, followed by two random letters.

The new serial system got a prefix RB or RA followed by 4 to 5 digits. It also included the letter N for Nottingham, a region of bike manufacturing.

The company changed a serial system once again, and you can find a series with seven digits at the bottom bracket.

In this period, Raleigh reintroduced the old serial system with 5 or 6 digits. All Super Course and Grand Prix models produced during these two years were marked this way.

The most famous Raleigh bicycles manufactured this year contained the new serial system with seven digits starting with zero.

During this decade, the company standardized the serial system. It started with two letters followed by six digits in a row. The first letter always determines the production factory:

The following number indicated the frame production month and year.

This serial number system was applied for frames produced in Japan or Taiwan. You can find them on the bike’s bottom bracket.

This current serial system for bikes produced in Raleigh’s Ilkeston factory comes with an SB letter and four digits.

The company changed bicycle seat shapes several times over the years, so you can use this to determine your bike age. For instance, models created in the 1960s and 1970s featured elongated seats, while those from the 1980s were wider and cushioned.

Vintage Raleigh bicycles were painted in popular colors typical for a particular period.

Most models from the 1960s and 1970s came with vibrant colors, including orange, rust red, and green. On the other hand, bikes painted in white, blue, and red were typical for the 1980s.

The company also changed the bike handlebars’ appearance, so their shape can be an excellent indicator of age. High-rise bicycles with U-shaped handlebars in a motorcycle style were trendy in the 1960s and the 1970s. Remember that Raleigh produced the first Chopper model for kids in 1969.

Most bikes Raleigh produced from the 1950s to the 1980s had three or five speeds. The first bikes with ten speeds appeared on the American market in the 1970s.

Standard components and parts the owner haven’t changed over time can also help in dating. Always check the frame, friction shifters, and suspension forks that are always typical for the particular production period.

Since this company has existed for so long, the quickest way to determine your vintage Raleigh bike’s age and value is to check the literature available online and offline.

You can also ask an expert from a bike shop for professional expertise or directly contact the British National Cycle Club or National Cycle Archive. However, there are a few other options, such as:

You can also look for help on bike forums, like:

Finally, sales sites are a relevant source of information, including the most popular:

Becoming a vintage Raleigh bike owner is an ultimate experience because of its history and unique story that goes with each one. If you are nostalgic or want your kid to ride such a beautiful bike, you can find numerous vintage models online or at auctions. Let’s go for it!