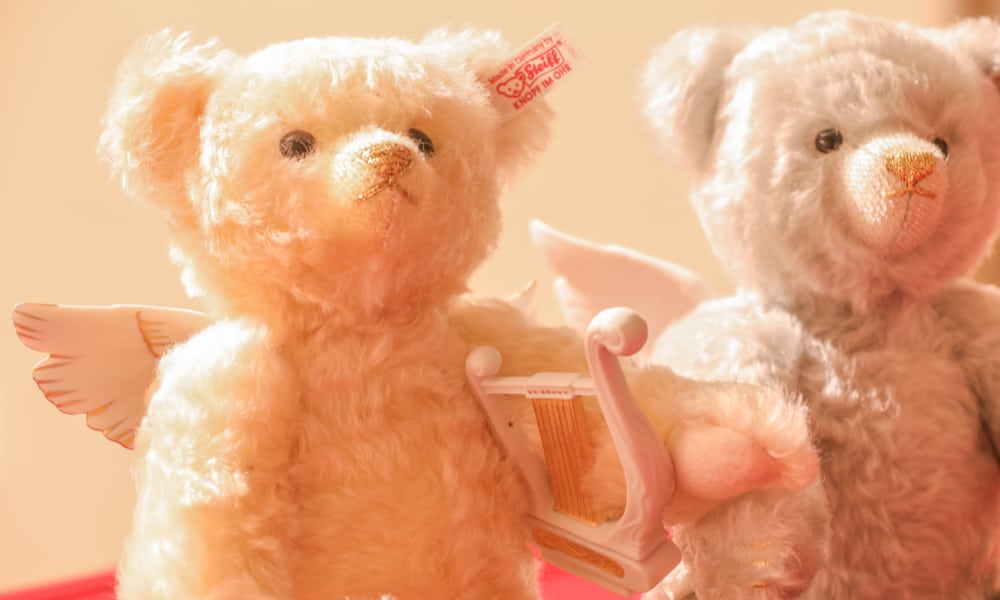 Although Steiff bears are no longer rare on the current market, and you can buy them at an ordinary mall nowadays, these stuffed animals have a rich history. More than a hundred years after the first Teddy bear occurred on the market, collectors enjoy buying old ones.

Interestingly, the vintage Steiff bear value can be surprisingly high. Some are expensive and often reach tens of thousands of bucks at auctions, while rare and highly appreciated ones are worth a few hundred thousand dollars. 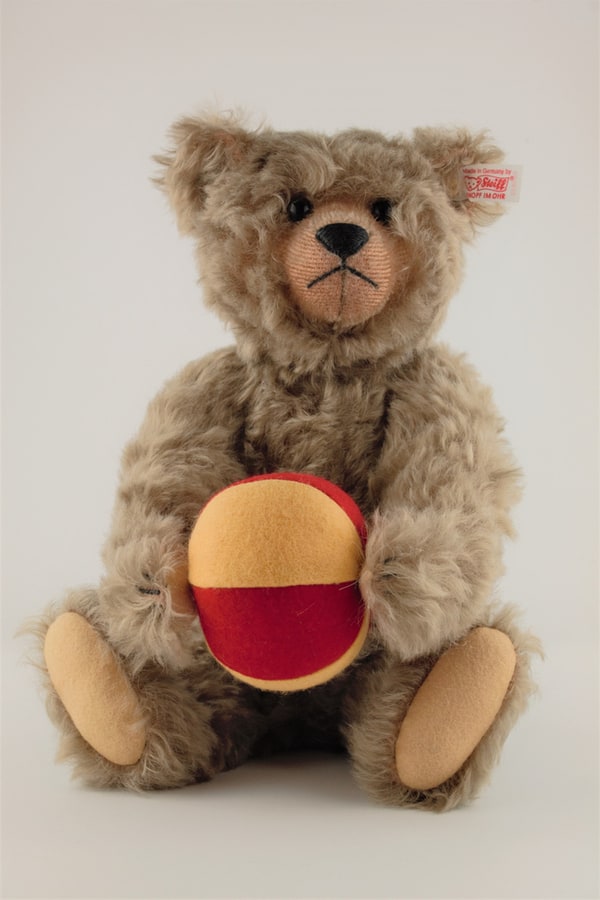 Richard Steiff created the first Steiff Teddy bear, the so-called BEAR 55 PB, in the early 20th century. Most collectors believe that the first bear ever made according to original design doesn’t exist anymore. This lovely stuffed toy had movable arms and legs, and it was the first one with such features worldwide.

In the very beginning, one American buyer ordered 3,000 stuffed bears from a Steiff, a toy-making company founded in Germany in 1903. Unfortunately, that first shipment never came, but that didn’t stop people from ordering new ones.

As soon as Steiff bears appeared on the market, they became a sensation. Thanks to the cartoon showing American President Theodore Roosevelt and a bear cub, they gained the nickname TEDDY.

In just three years, 400 staff and 1,800 out workers from the Steiff company made almost two million bears, making 1907 a Teddy Bear Boom Year.

To prove the authenticity of their products, the Steiff company used a BUTTON IN EAR tag. Nothing has been changed until these days, and the company still uses it to differentiate between Steiff toys and counterfeits.

The Steiff company’s motto ONLY THE BEST IS GOOD ENOUGH FOR CHILDREN became widely recognizable. It is now a symbol for top-notch products like no other similar company has achieved to date.

Then and today, the company has made sure that their toys are resistant to flames as much as possible. Plus, they can endure wear and tear for a long, thanks to quality materials. 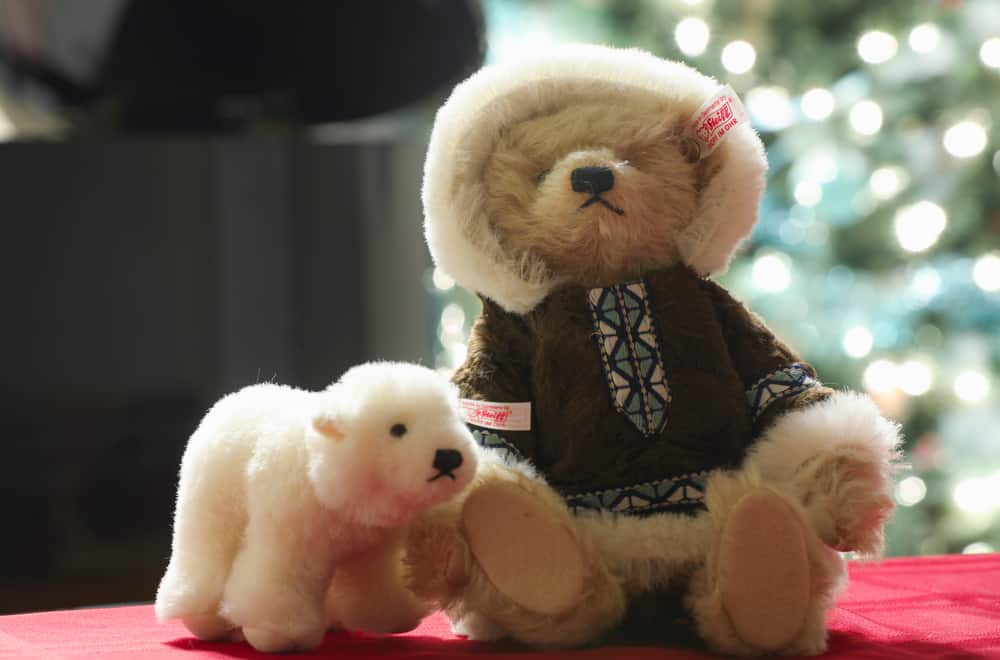 Other than that, Steiff bears have many features that make them unique and help appraisers and experts recognize the authentic pieces. For instance, a bear type and the time when a particular toy circulated on the market could determine each piece’s origin, production year, and value.

One of the primary ways to identify a Steiff bear was by the metal trademark Button in Ear (Steiff – Knopf Im Ohr). Interestingly, Franz Steiff also added an elephant print on the button’s surface in early design versions produced in 1904.

That was an excellent way to protect Steiff’s high-quality products from imitations and prevent possible fraud. Later versions had printed only the company’s name, Steiff, but buttons stayed metal.

Keep in mind that there are several particular stuffed toys that bear both marks, making them rarities. Dedicated collectors are prepared to pay a fortune for one of these pieces.

Unlike bear toys existing on the market until then, unique Steiff bears became quickly recognizable by their structure. The inside construction featuring metal pins and cardboard disks was crucial for the bear’s head, arms, and legs to move.

They also introduced two characteristics never used before. For instance, you can notice that Steiff bears contain a typical blonde mohair stuffing made of precious Angora goat’s wool. Plus, the company has used cotton fabric for the bear’s paws from the very beginning.

The quickest way to determine the Steiff bears age is to check their eyes. Initially, these toys’ eyes were black shoe buttons, but they changed over time. By 1913, standard Teddy bears got eyes made of brown and black glass pupil beads.

One more typical feature of the oldest products was the paws with five claws. In 1906, the company created bears with four claws per paw, making their product recognizable until now. 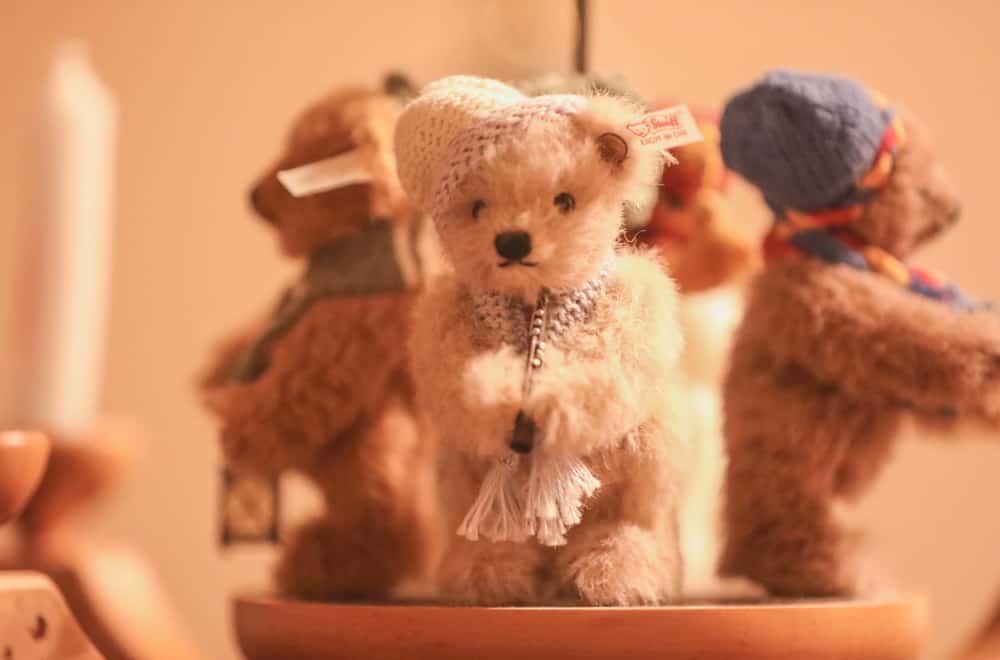 As it always goes, the product’s value primarily depends on its condition when offered for sale. Ordinary Steiff bears produced after WWII, particularly from the 1950s to the 1980s, can be worth approximately $60. Sometimes, their price can be higher when the toy is particularly well kept.

That surprisingly low value is probably a result of these bears’ less realistic appearance compared to other toys this company produces. On the other hand, Steiff Teddy bears from the early years come in a price range from $520 to $800, depending on their preservation levels.

Damaged bears, particularly those with missing fur patches, the trademark button, or eyes, will go for $300 to $400 on a good day at the auction.

Be aware that it is possible to repair a damaged Steiff bear, and you can sew on its eye or patch tears. Unfortunately, you can do nothing about the missing Steiff company’s trademark button.

The button’s importance is not only esthetic, but it indicates the production year. If you don’t know when your toy was created, the button will solve the mystery. There is no way to replace the once lost original button, decreasing the bear’s value.

The Most Valuable Steiff Bears

Over the years, Steiff has made many limited-edition Teddy bears. Some are custom-made for their personnel to thank them for years of service. Some editions have been lost with time, raising saved toys’ value.

On the other hand, customers didn’t warmly welcome some models, such as the Hot Water Bottle Teddy bear. Their sales were limited, and thus you can’t find many well-preserved products nowadays. Paradoxically, that makes their price skyrocket.

The list of the most expensive Steiff bears you can find on the current market includes: The company’s designers were convinced that a lovely Hot Water Bottle Teddy bear with an added can should be a hit in 1910 when it came out as a new product. It was supposed to be used as a warming toy for children during cold weather.

Unfortunately, it didn’t get a good reception from the Steiff company’s regular customers, causing it to go off the shelves. As a result, only a few well-preserved pieces are available on the current market, making this model pricey. One was sold for $61,740 at auction in 2006. 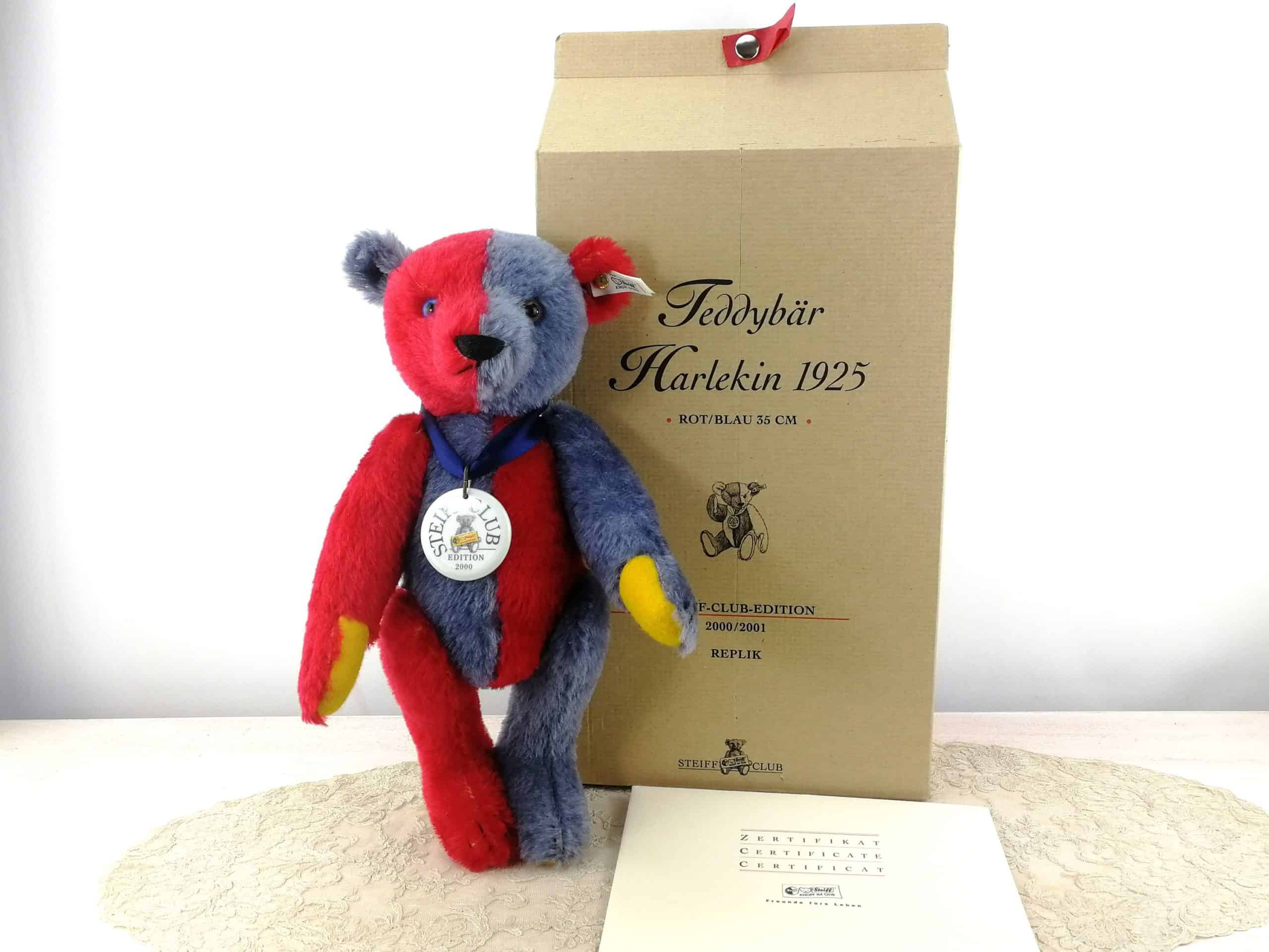 This Teddy bear type first appeared in 1925. It is known that two of them exist these days. The half-blue Harlequin bear from the Paul Greenwood collection reached $74,164 at auction.

The other Harlequin bear with a different pattern belongs to a retired worker. She worked at Steiff’s for more than forty years and got this toy in honor of her service and loyalty. The estimation value goes for approximately $72,000, but it depends on the toy’s condition. 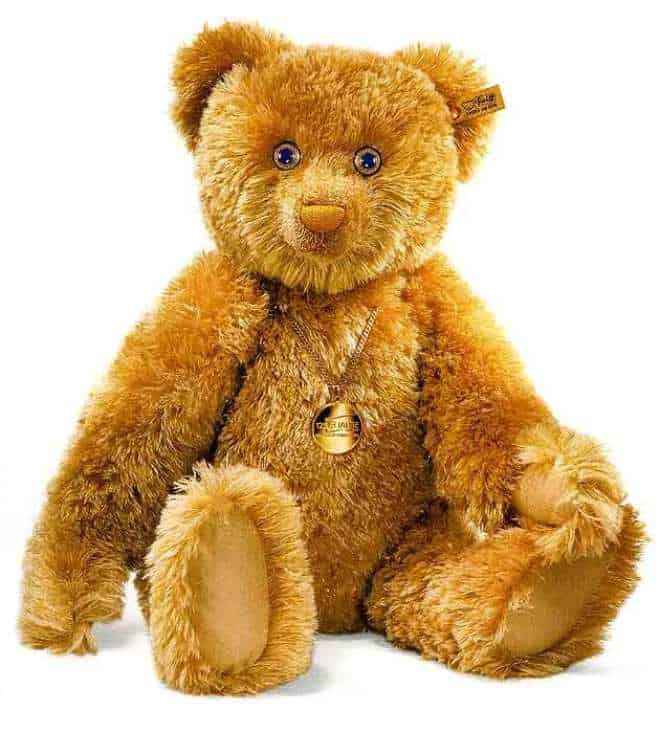 This limited-edition bear was famous for its extravagant design. Only 125 toys were manufactured in 2008, symbolizing the company’s 125th anniversary.

It had diamond eyes, the nose made of pure gold, while its magnificent fur contained golden threads. Its estimated value is $85,000 on the current market. 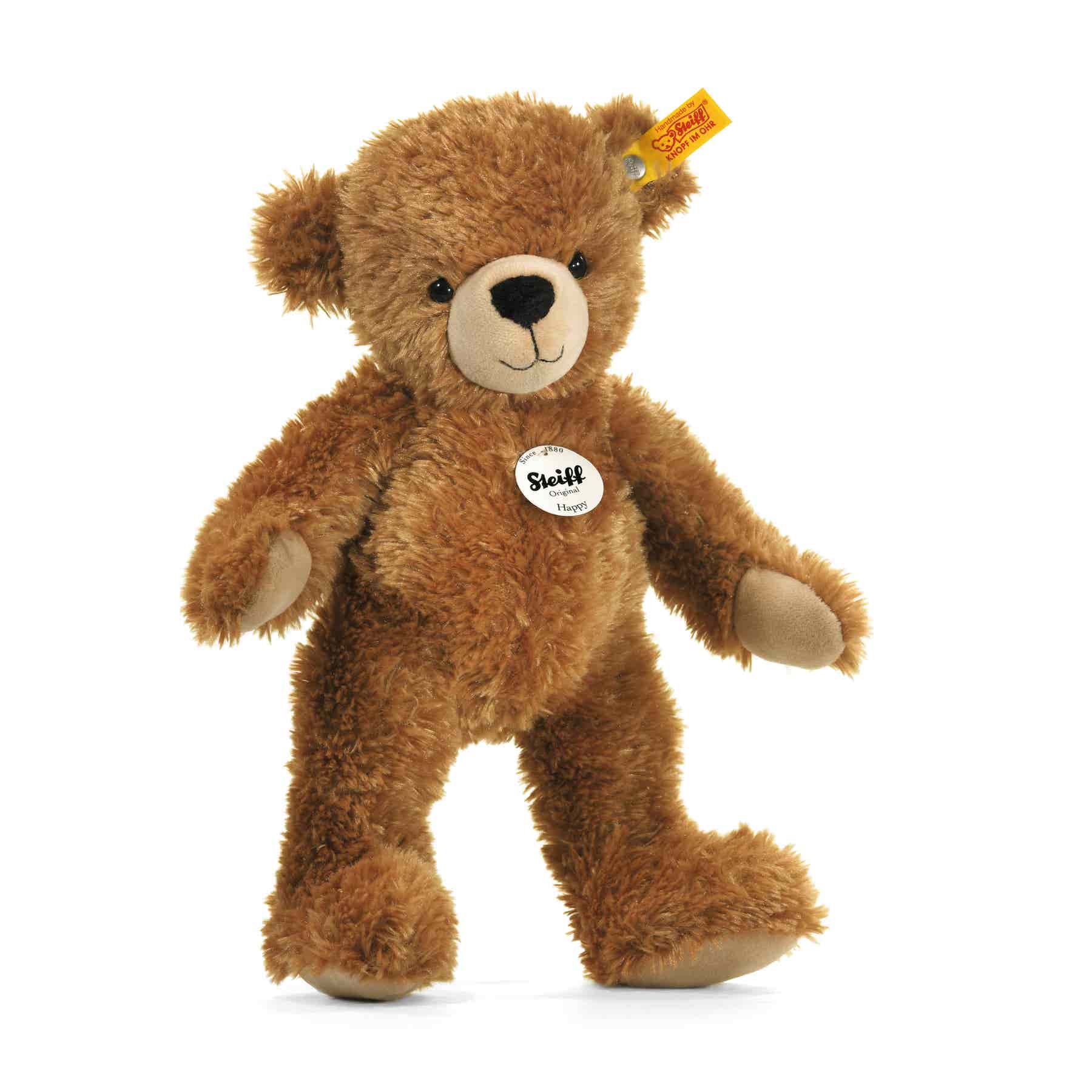 Despite its name, the Happy Teddy bear has quite a solemn face and darker fur. Paul Volpp bought one for $55,000 at auction in 1989. That lovely mohair bear produced in 1926 became a present for the 42nd wedding anniversary to his wife, Rosemary. 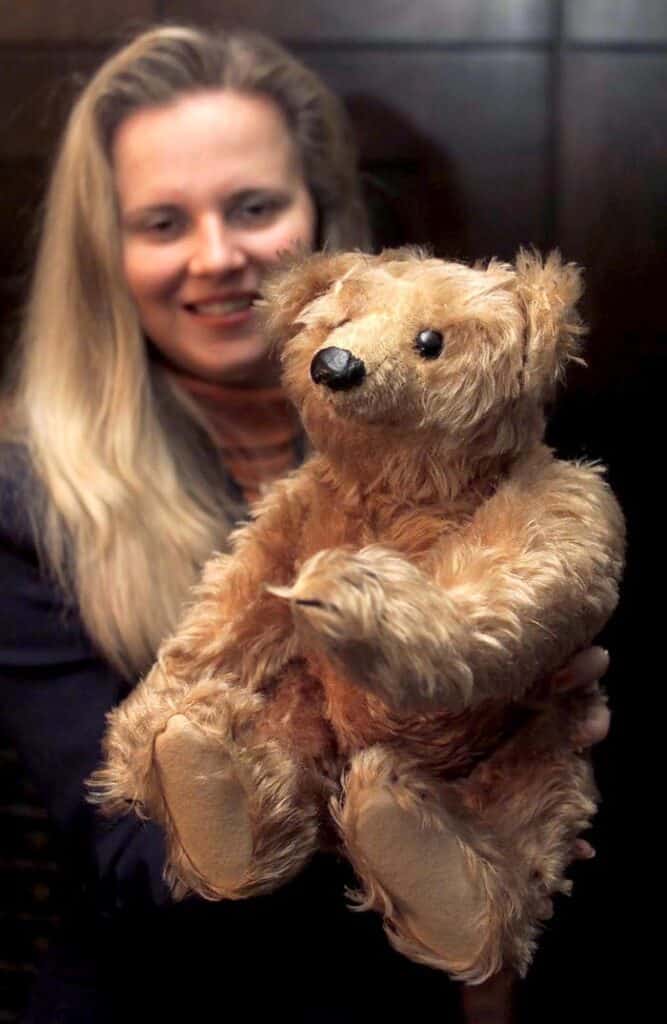 One of the oldest bears, originating from 1904, had white fur and a sturdy body because of the metal rods that moved its arms.

Although a few of these first bears still exist, it is practically impossible to find them. Due to their age and well-kept appearance, the final bid would be $104,000. 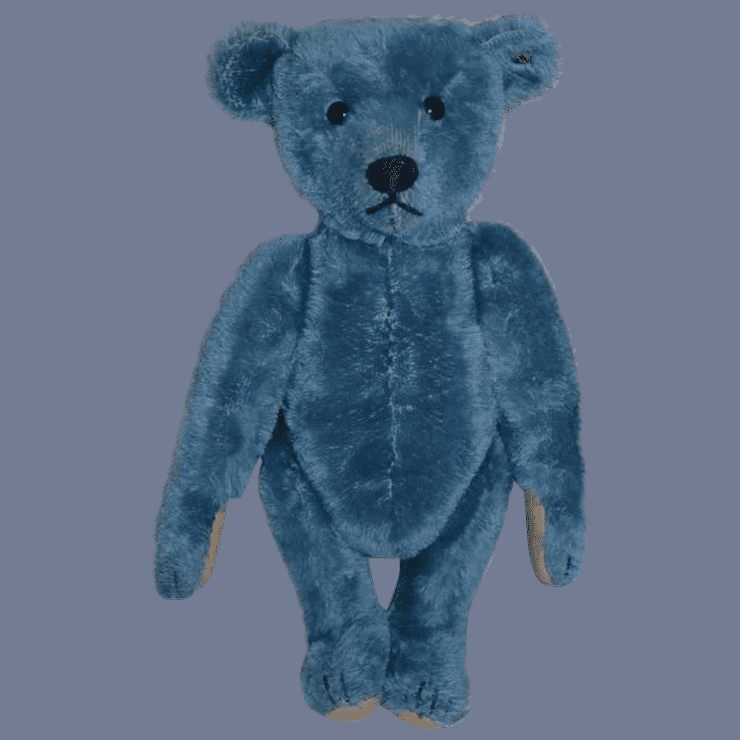 This bear was supposed to come in a set of six different colored toys as an order from a London-based company, Harrods. However, they changed their mind, and these bears stayed in the headquarters of Steiff in Germany.

The guesswork is that other bears didn’t make it past the design phase, and thus only the blue-colored toy from 1908 still exists. Blue Elliot fetched a $64,200 price. 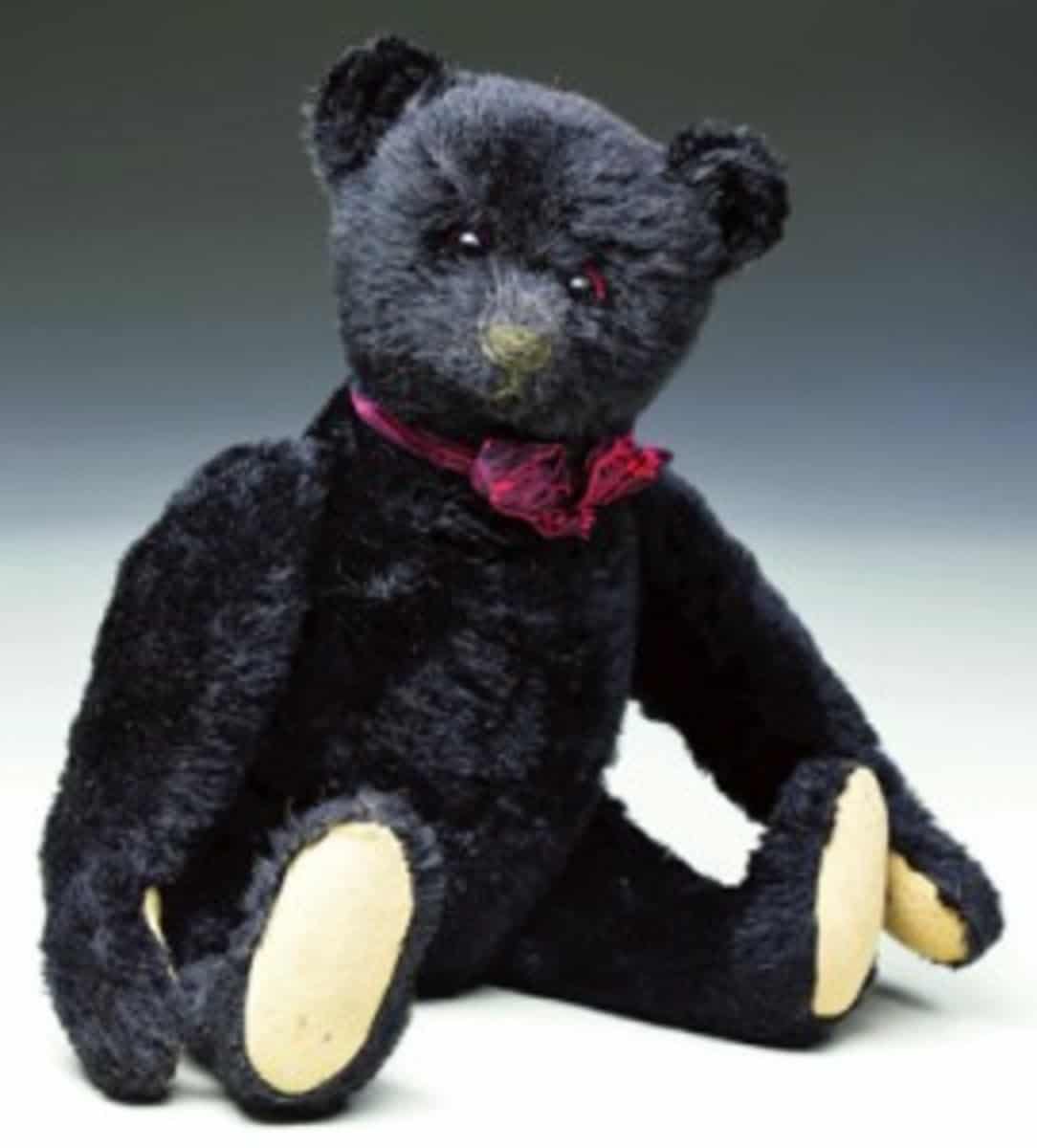 This bear has quite a morbid origin. It was supposed to go on sale long before the Titanic sank, but the combination of black fur and eyes was creepy even to the designer himself. He thought that such a dark toy might scare children.

Things changed after the Titanic sank. The company began production immediately, and 655 Teddy bears were made in 1912. The toy got red rims around black shoe-button eyes, meaning the bear was crying for the victims of the Titanic. 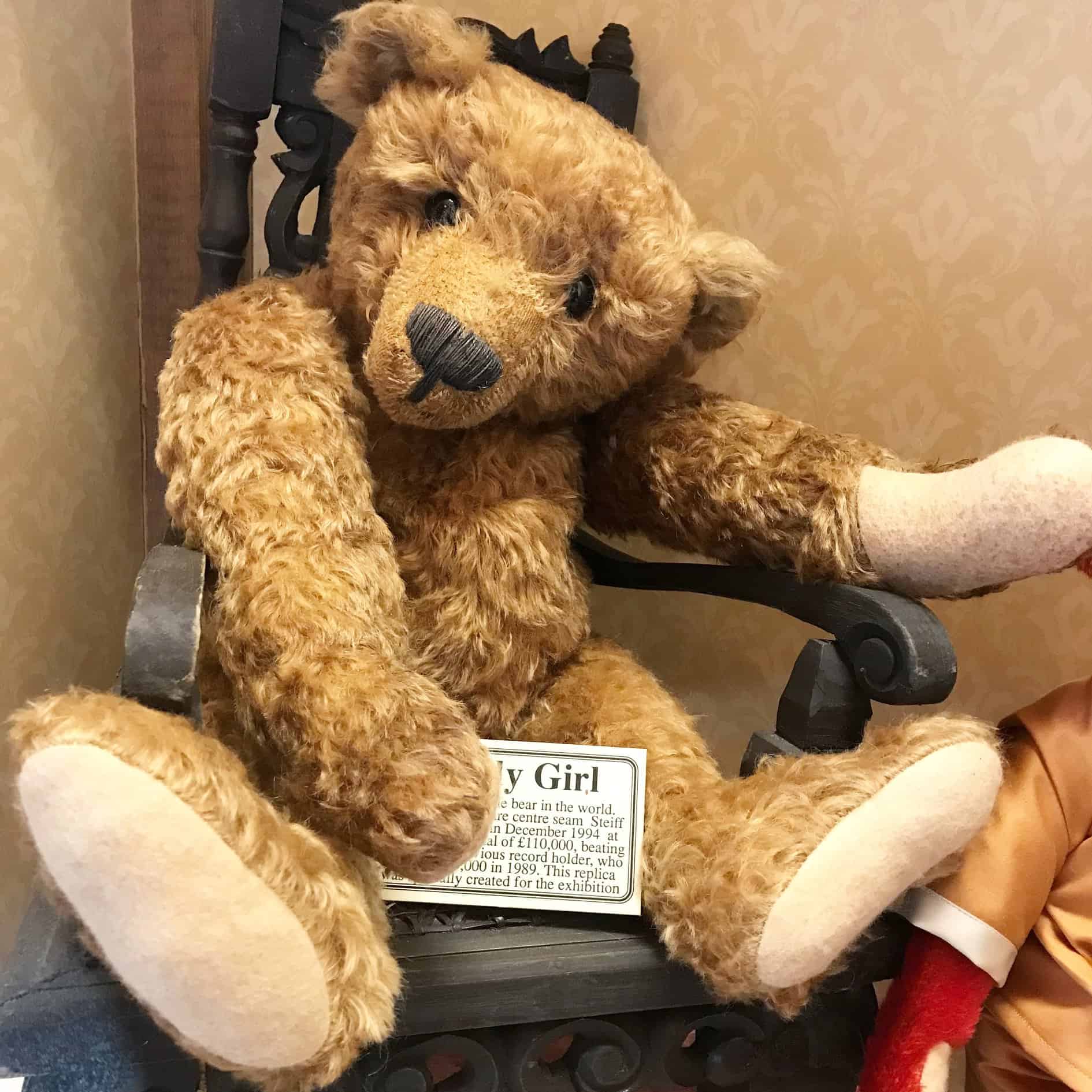 This Teddy was an achiever. Colonel Bob Henderson got this bear when he was born in 1905. Afterward, it went with Henderson to WWII, survived the D-Day along with its owner, and returned home with glory.

The fact that a grown man used his childhood bear as a comfort and a symbol of hope was another element that gave it value. His Teddy Girl was sold for $143,000 in 1994. 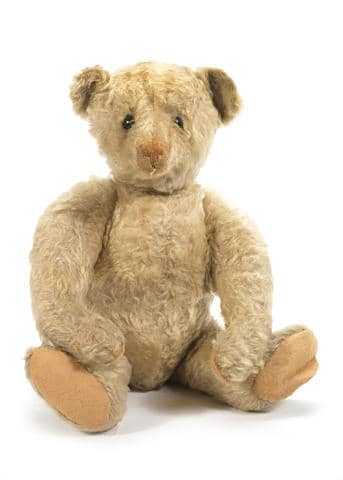 According to collectors, this particular cinnamon-colored Teddy bear with mohair fur and beady eyes that came to the market around 1908 was beautiful. It carried a silver brooch with the name Will engraved.

You could guess whether it was a gift for someone named Will or William, or the bear’s name is Will. Unfortunately, it will stay a mystery forever. Nevertheless, the final bid for this toy was an astonishing $55,500. 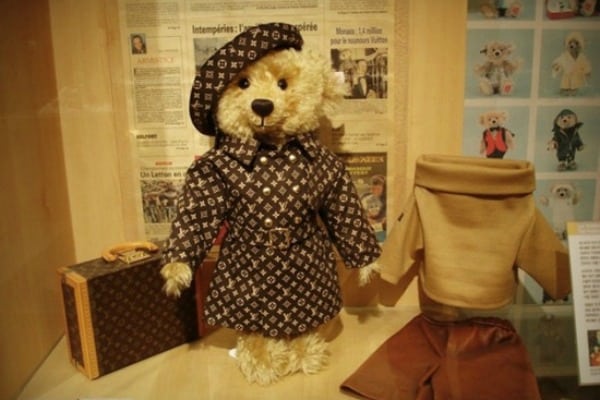 This Louis Vuitton Bear won the Guinness Record for the most expensive Teddy bear ever. It was made in 2000 with beautifully tailored clothes and luggage and sold at a charity auction in Monaco.

Korean Jessie Kim paid an unbelievable $2,100,000 for it and reserved a spot for it in a Teddy bear museum on Jeju Island, South Korea.

These lovely Teddy bears appeared thanks to the vision and dedication of one woman, Margarete Steiff, who founded the Steiff company. Surprisingly, they were not her original design.

After her nephew, Richard Steiff, created these lovely stuffed animals, the company got a chance to develop and expand. Finally, it overcame the boundaries by shipping the orders to America.

Steiff bears hold the standard for quality in the toy-making industry from their invention to today. The company still utilizes traditional materials and proven manufacturing techniques to make the best quality products.

Nowadays, stuffed bears are of great importance as a present and comfort toy, notably popularized after Winnie Pooh became popular in the literary world. Gifting a Teddy bear is a blessing for a child and a symbol of compassion and love.

Many experts believe that Teddy bears are crucial for kids’ emotional development, helping them through tough times. As a companion, a Teddy bear your child holds while sleeping will help them understand the surrounding world and build a warm relationship with other people.

Plus, children’s attachment to lovely stuffed toys shows their emotional maturity. They learn to love not only a beloved bear but also their surroundings.

The Steiff started as a small business and became a large company that set the world’s standards for quality in stuffed toy production.

Since 1880, when Margarete Steiff founded her company, the bears it produces have become valuable and highly popular worldwide. Steiff bears’ history and importance for the company and children are impressive.