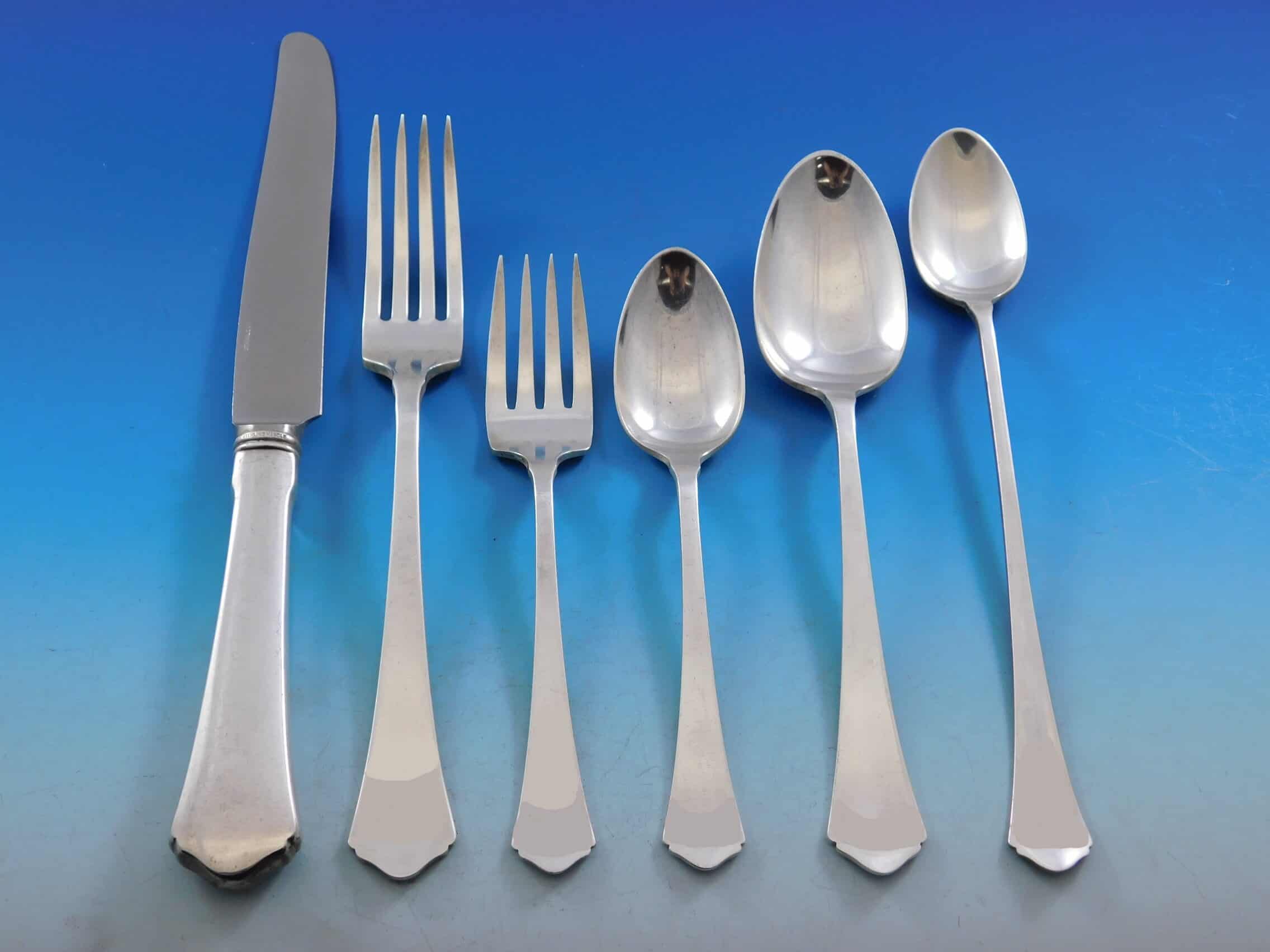 One of the biggest selling points to owning Wallace sterling silverware is its signature appearance. They are classy, elegant, and timeless. And because there are so many different varieties, shapes, sizes, and patterns – they are highly collectible in the antique world.

Today we’re going to explore just how valuable antique and vintage Wallace sterling Silver can be. So dust off and wash your old silverware. Take a closer look at its design and who knows, perhaps your silverware is worth its weight in gold?

Robert Wallace was born to Scottish immigrants in Connecticut, in 1815.

At 16, he was an apprentice for Captain William Mix, a spoon maker, igniting in Wallace a passion for smiting. In 1833, Wallace opened his workshop and began creating his signature brand and style of silverware spoons and teaspoons.

In 1834, Wallace met with Louis Feuchtwanger. He was a German chemist who taught him about making durable silverware, known at the time as German silver or nickel silver.

Wallace is often regarded as the first American to truly revolutionize this new craft, and he soon began supplying several chains with new silverware.

By 1849, Wallace diversified into several lines of products, including knives and forks. In the following decades, the company went through several changes and mergers.

Robert Wallace died in 1892, but his legacy continued with his sons, and the company became the biggest producer and seller of flatware silver.

The Wallace company began mass-producing silverware. It was during these years many iconic and classic vintage designs were made, including William Warren’s ‘Third Dimension Beauty’, Sir Christopher, and Rose Point to name but a few.

Flash forward to the 1950s, and the company was renamed Wallace Silversmiths and purchased two other silver manufacturers, the Tuttle Silver Company and Smith & Smith. The company easily became one of the largest and most recognized producers of silverware in America.

Maker’s marks are essentially logo, brand, or signature that tells us who made the antique or vintage piece. It can also tell us when and where was made, too.

Luckily, it was very common for Wallace to brand their silverware. If your piece does not have one of the following markings, it is likely not Wallace Silverware.

The following marks are quite common on their products:

The most popular Wallace flatware patterns

As with all antique and vintage collectibles, some designs are more valuable than others. Wallace silverware is no exception to this.

Wallace’s designs can easily be dated to set periods in the company’s timeline. The designs from the early 1930s, straight through to the 1950s, are often the most valuable at auction. Inspired by the Venetian lace of the traditional Rose Point wedding veil, this series is one of the most popular of Wallace’s creations.

Introduced in 1934, Rose Point captures the lost art of needlepoint and features beautiful, intricate, and world-famous roses in full bloom on their handles. Prices range from: 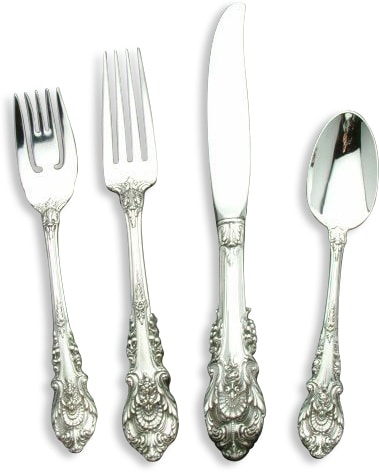 This silverware pattern took inspiration from the world-renown architecture of the same name. Designs copied common features of cathedrals, churches, and spirituality in general.

They date from 1936 and can range in price from: Released in 1937, this pattern drew on the influence of violin maker, Antonio Stradivari. The Art deco style was incredibly popular at the time, and people were interested in simple, minimalistic features.,

Wallace designs subtly mirrored that of a violin, with dew-like drops flowing from front to back. Prices range from: Produced in 1941, the Grand Baroque pattern drew much of its inspiration from the Renaissance. It marked a turning point for Wallace, where they became not only producers but designers as well.

Grand Baroque sets are often the most expensive Wallace collections, with prices ranging from:

Romance of the Sea Romance of the Sea had a simple, minimalistic design to it. Produced in 1951, it has obvious inspirations from nautical mythology, with shell shapes and curves forming its signature look.

Though not as readily available as other patterns, this set can still fetch a high price at auctions, e.g.:

Sterling silver is real silver. However, like many manufacturers of the time, Wallace produced several types and qualities of silver. Some are sterling silver, but others may be silver-coated or even stainless steel.

So how can you tell if your prized  Wallace silverware is the real deal?

Did you know that sterling silver is not magnetic? You may be able to spot fake silver by using a magnet nearby. If the piece joins strongly – this is a strong indication that it’s silver-plated, and that there is another metal type underneath.

If the magnet has no effect, that doesn’t rule out a silver-plating. But it can be reassuring!

If your silverware is part of a wider pattern or collection, this can usually indicate it is of high quality. Unsure if your piece belongs to a collection or not?

This website has an extensive database of Wallace designs.

Although dirt and decay are things we don’t like to see – sometimes they can prove your sterling silver is legitimate.

Sterling silver contains both silver and other metals like copper or zinc. These additional materials make the silverware prone to tarnishing.

Use a white polish cloth and rub your piece gently. If there’s a dark brown or black residue, this can indicate your silver is sterling, albeit suffering from some wear-and-tear.

If in doubt? Seek a professional

Especially if you have a wide collection of Wallace silverware, sometimes it pays to have them professionally appraised. Experts will be able to examine the silverware in detail by filing a small piece off to test its properties.

Is Wallace silver worth anything?

Now to one of the most important parts of owning Wallace silverware – are they worth much?

The short answer is yes. Wallace is one of the most popular and valuable brands of sterling silver, and if you own a piece, or perhaps even a collection, you could have some valuable vintage items on your hands.

One of the most common ways for people to value sterling silver is using the current rate for silver.

Sterling silver is often worth 92% of pure silver. However, markets fluctuate, and not every buyer or seller will use real-time information to inform their prices. Silver is often valued in ounces, and the market values can offer you a baseline from which to work. This website has daily updates on the current value of sterling silver.

Other factors which may influence the worth of sterling silver include:

It’s quite common for Wallace silver to be sold in bigger collections, in sizes like 4 pieces, 36 pieces, 48 pieces, and 72 pieces.

That said, there are some listings with even larger amounts of silverware bundled together. These lots are known to go for tens of thousands of dollars. Examples include:

When we think of Wallace sterling silver, we immediately think of flatware – a variety of dinner forks, knives, and spoons. But some other pieces of sterling silver can be just as valuable, if not more so.

Some examples of Wallace branded silverware well worth your investment include:

Plates come in many different shapes, sizes, and styles. Singular plates sell for a couple of hundred dollars on their own.

Like flatware, plates are often sold in dinner party sets of 6 and above, and can fetch higher prices with more in the collection:

Serving plates are long, stately pieces that are infamous for fine dining and luxury.

They’re particularly valuable because these plates are often sold on their own, and don’t require a large collection of vintage Wallace collectibles to catch the eye of buyers. Some examples include:

Several unique, niche flatware pieces can be worth a lot of money for collectors who want to complete or expand their existing sets. These include vintage pieces like:

if your sterling silver is in poor condition, it could be deemed worthless. Examine your pieces closely for any signs of scratches, signs of damage, tarnishing, bending, and more.

Some collectors appreciate light repair work and/or cleaning, though we always recommend consulting a professional first.

The difference between antique silver and sterling silver

Silver has a very regal, refined look about it. But is there much of a difference between antique and vintage sterling silver? Let’s weigh up the differences.

Age is the primary difference between an antique and a vintage collectible.

The most popular pieces that Wallace made are from 1930 onwards. It will still be a couple of years before your Wallace sterling silver becomes antique.

The most obvious difference between different types of silver is their chemicals. There was a surge in sterling silver production in the 1940s. Beforehand, pure silver was a more common material.

The differences between the two include:

Ironically, in certain situations, older antique silverware can be stronger and longer-lasting. Pure silver is naturally a hardy, resistant material, and does react with oxygen or water at ordinary temperatures. The only thing which can affect it is atmospheric pollution, which creates a black tarnish.

Sterling silver will tarnish quicker because of its makeup. Copper and zinc expose the silver to more weaknesses, speeding up corrosion and decay.

Depending on the type of silver, there were only certain designs you could do on sterling silver.

Antique silver is more likely to be simple in design. That’s because pure silver is a harder metal to work with, and was generally used for fittings, and frames.

Sterling silver was more malleable and structured. Smiths could carve intricate details into them and experiment with shape and size, leading to artistic jewelry, handles, and plate designs.

Pure silver has a bright, white-grey, and metallic appearance. Sterling silver is more mid-toned, shaded, and neutral in color.

Silver can be marked differently depending on how pure it is.

Antique, pure silver will often have a mark that defines its chemical makeup. Many pieces will have ‘99’, ‘999’ or ’99.9’ on the base to show its high-quality, pure silver.

On the other hand, sterling silver is marked with a lower number, or may simply just have ‘Sterling Silver’ stamped on the base.