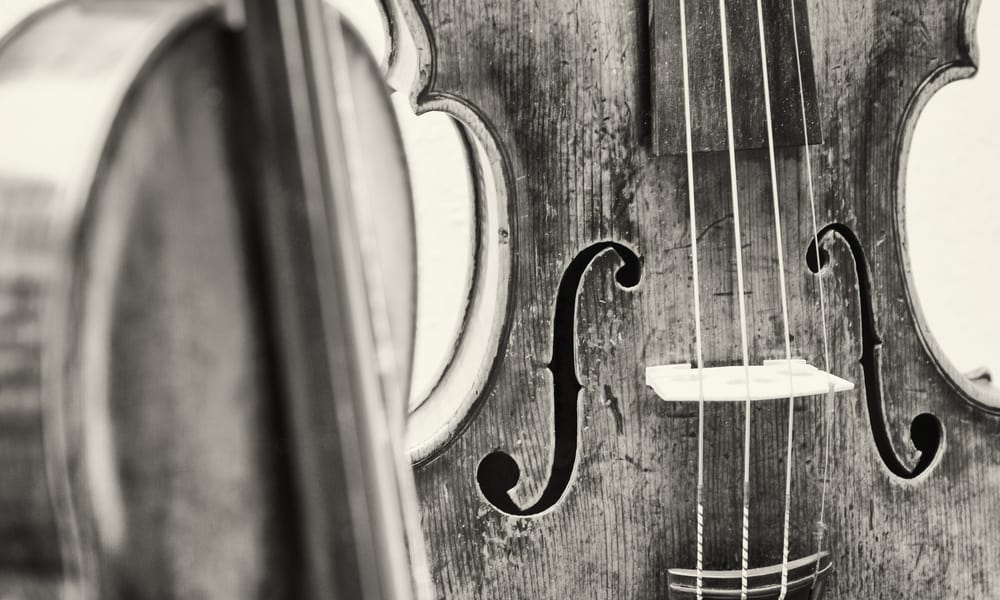 The violin is considered a queen among bowed stringed instruments. Even no one can determine exactly its real origin, the rabab and rebec, which came to Spain from the Arabian Peninsula, are considered the forerunner of the violin.

However, one thing is clear. Unlike other instruments, there were no gradual improvements of the violin over time, but it suddenly appeared in the 1550s in the form as we know it today. Unfortunately, no one of these early instruments exists today, and we can trace the violin history only based on paintings created in that era.

The History of the Violin

No one knows when the first violin was made. Its oldest known ancestor used on Sri Lanka 5000 BCE, was the ravanastron. This instrument had one, 22 inches (56 cm) long string that spanned three octaves. Surprisingly, it is quite similar to the string length and tonal range of all four contemporary violin’s strings.

Even though people used stringed instruments, including the Greek kithara and Chinese erhu, for centuries, the first one held under the chin while played was the three-string rebec from the Middle East, which appeared in the 10th century.

The instruments played with a bow probably appeared in the 9th century AD in Central Asia. In Europe, musicians started using lira and two forms of bowed stringed instruments from the 10th century.

Lira da Braccio – Many Cretan and Byzantine instruments had the name lira, but the lira da Braccio was the type that the performers held with arms while playing. Its strings were tuned in fourths like in a modern violin, but it had several limitations, as well.

For example, musicians mainly use it for chordal accompaniment, but some chord inversions were unplayable because of the instrument’s construction.

Rebec (gigue, rubebe) – After the Muslim conquest of Spain, the rebec came to Western Europe. Another option was that the instrument was developed in this country during the Muslim Conquest from the two-string rabab that musicians kept upright while playing.

It was related to the lyre and usually had three strings that were tuned to fifths. The musician supported it with the chest or the shoulder while playing in the standing position.

Fiddle (French vielle, Latin fidicula) – It is known that the 13th-century French vielle was the earliest rebec version. It existed in numerous types, with three to five strings in most cases. It had a flat back and clearly defined body made from one piece of wood.

Thanks to its agility and wide range, this instrument was the favorite choice of Medieval troubadours, who played by supporting it on the left shoulder.

Two distinct stringed instrument families appeared at the end of the 15th century.

The tight violin emerged first in Northern Italy from the viola da Braccio, somewhere between 1520 and 1550. It became popular in Brescia, Venice, Milan, and Cremona.

The oldest surviving violins with only three strings are made in 1542 by the violin maker Andrea Amati from Cremona. He also made the first four-string violin probably in 1555, but the oldest preserved one dates from 1564.

Brescia had a famous school of highly prized makers of string instruments and players from 1485. The first document where the violin was mentioned comes from Brescia in 1530. Jambe de Fer was the first who described the violin appearance and tuning in the Epitome Musicale from 1556.

At first, the viola was the preferred instrument in aristocratic circles, while folk and professional musicians played the violin. However, this small stringed instrument was accepted quickly and became popular due to its limitless expression.

Since the violin became highly popular in Italy, many violin-making schools emerged from 1600 to 1750, including the Amati’s sons’ Cremonese school. It continued its mission thanks to Andrea Guarnieri and Antonio Stradivari.

The Brescian school was the oldest in Italy and existed almost half a century before violin making began in Cremona. The most famous master craftsmen learning there were Gasparo da Salo and Giovanni Paolo Maggini.

Antonio Stradivari – He made approximately 1,100 instruments, including violins, violas, harps, cellos, and guitars during his career. He established the final dimensions of the violin, which are still current.

Nowadays, some data shows that about 650 of his instruments still exist, but his manufacturing method is still unknown. In fact, no one can reproduce the magnificence of his violins despite repeated attempts and the advantages of modern technology. This luthier made half of the ten most expensive existing violins in the contemporary world.

Giuseppe Guarnieri – He made instruments appreciated because of their sustaining tone. Since only 200 of them survived, their prices are never less than $10 million. The best violin virtuoso of all time, Niccolò Paganini, played one of his violins.

Jacob Stainer’s violin-making school in the Tyrol made highly quality violins. Johann Sebastian Bach played one of their instruments.

A violin maker Aegidius Klotz from Mittenwald, crafted many violins, including the one Mozart played. In France, the best maker was Nicholas Médart. Daniel and Joseph Stadlmann were the best in Vienna, while the most prominent violin maker from England was Barak Norman.

By the end of the 18th century, the old violin-making schools disappeared in Italy. That was the period when production lines appeared and new materials introduced. The most famous violins were the ones produced in France, Mittenwald (Germany), Saxony (Germany), Austria, Bohemia (the Czech Republic), and Italy.

In 1786, Françoise Xavier Tourte invented the last version of the violin bow and standardized its weight and length.

Around 1800, the leading violin makers started working in France after the French Revolution. In that period, the bourgeoisie took the organization and financing musical events from the aristocracy.

Since they organized these events in large halls, they needed louder instruments. Therefore, violin makers changed this instrument, added thicker bows, stronger strings, and raised bridges that increased string tension. As a result, modern violins occurred at the end of the century.

In the 1820s, the German composer Louis Spohr invented the chin-rest, making the left-hand movements much more comfortable.

The violin is highly popular today, even though modern music usually doesn’t use older instruments. However, it seems that many people want to play it, and there is no end to the creation of its new versions.

In the early 20th century, the Romanian Stroh violin with trumpet-like bells used amplification before it became common.

Nowadays, many folk, pop, and even rock musicians use electro-acoustic or seven-string electric violins with amplification.

The Most Famous Violin Players

Most of us connect the violin with classical music, but many musitians use this beautiful instrument while playing jazz, rock, country, bluegrass, and folk.

The most prominent violin players of all times are:

Niccolò Paganini – He is considered the best violinist of all time.

Itzhak Perlman – He highly contributed to the popularity of the violin.

Antonio Vivaldi – He was a real dad of the Baroque violin who influenced the way of playing this instrument.

Maxim Vengerov – He was the first musician who became a UNICEF International Goodwill Ambassador.

The most notable jazz violinists:

One of the most famous black classical composers was William Grant Still, who created one of the most influential American Symphony No. 1 ‘Afro-American.’

The name violin means ‘a small stringed instrument’ on Italian. However, the term comes from the vitula, the Latin medieval word, which literally means ‘heifer’ in the modern Latin translation.

The contemporary violin is a sophisticated instrument made of 70 different pieces of wood.

At the very beginning, violin strings were made of stretched and twisted sheep gut (catgut). Nowadays, manufacturers use solid and stranded steel and some synthetic materials wound with metal, including silver.

The original shape of the violin bow looked like a hunting bow until François Tourte created it as a concave curve in the 19th century. Approximately 150 to 200 hairs that each violin bow has were made of various materials, including horsehair and nylon.