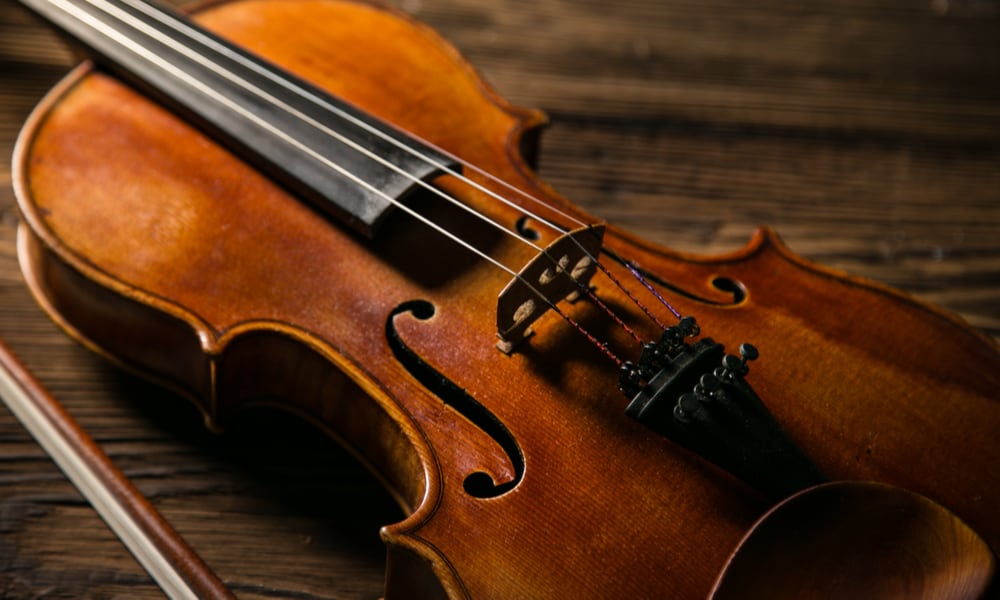 If you are new to playing the violin, one thing that might pique your curiosity is what the strings are made of. Innocent as they may look, the strings have a rich history and have come a long way to where they are in the modern world of string instrument making. This article provides an explainer on what violin strings are made of.

Over the years, string instrument makers (luthiers) have constructed instruments using strings made from various materials. For the violin, luthiers use the following materials:

Catgut, also known as gut, is a type of string prepared from fibers extracted from the walls of sheep or goats’ intestines.

The use of catgut to produce strings goes as far back as 6,000 years ago and continued well after the First World War. All strings of the violin, G, D, A, and E were initially made from gut.

Because of their pliability, gut strings were popular and still are among some professional players. Strings made from gut produce rich and complex undertones, which is one of the reasons why advanced players prefer catgut strings.

That being said, gut strings have their setbacks. These strings are particularly supple. Even when the strings are dried and stretched taut, they still bend easily and are therefore slow to respond to the stroke of the bow.

This quality makes violins that have gut string less appealing to non-professional players. However, advanced players can masterfully use the bow to coax gut strings to produce complex and expressive tones.

Strings made from catgut are also more sensitive to temperature changes and require frequent tuning. These strings are prone to breaking and wear out faster than steel or synthetic strings.

Strings made from steel became popular at the dawn of the 20th century. The E string on the violin was the first to transition from having a catgut core to a steel core. Steel E strings come in three different varieties: plain, plated, and wrapped steel.

The plain steel strings are made of just that—a pure steel core. The plated variety has a steel core coated with other metals such as platinum, gold, or tin with each metal delivering a different tone. Generally, plated E strings will produce a crisper and clearer sound than plain steel.

On the other hand, wrapped E strings have a steel core wrapped with chrome. These strings produce a more rounded and subdued tone.

Compared to catgut strings, strings made from steel are more responsive and deliver a more pronounced, almost high-pitched tone.

Steel core strings are a favorite among electric violin players as well as jazz and folk musicians due to the strings’ durability and capacity to produce louder tones.

Many modern brands of violins have synthetic strings. These strings became popular at the start of the 1970s. Synthetic strings are made from premium nylons and deliver a tone that resembles gut core tones but with more stability, clarity, and focus.

You might come across the term ‘composite’ in reference to violins with synthetic strings. In the last two decades or so, string manufacturers have been producing synthetic strings made from a combination of polymers and nylons to produce a richer tone. This combination of materials is what gives these strings the name composite synthetics.

Strings made out of synthetic are highly responsive to touch. For this reason, synthetic string violins are a good choice for beginners who are yet to master how to maneuver the bow to produce sophisticated sounds. Also, unlike catgut, synthetic cores do not require constant tuning and upkeep.

What Are Wound Strings in Violins?

If you are new to the world of violins, you’ve probably heard about string cores and wound strings, and wondered what these are.

The core simply means the main material a violin’s strings are made from. As we have seen, this material can be synthetic, gut, or steel.

Most modern bowed instruments, including the violin, do not have pure gut, steel, or synthetic strings. Instead, these core strings are usually wound up in a metallic material such as aluminum, steel, chrome, or silver.

Depending on the brand, your violin might have gut core strings wound in aluminum, silver, or other such metal. The only way to tell what core material the strings are made of is to find out from the manufacturer, luthier, or violin dealer from whom you bought your instrument.

Generally, wound core strings have a longer lifespan and deliver the sought-after mellow undertones of catgut strings. Nonetheless, the exact tone produced will depend on the number of metallic layers used to plate the core string. The more the number of wound layers, the lower the pitch produced by the strings. Strings with fewer layers will produce a high-pitched tone.

Another interesting difference between the various violin brands is in the way the ends of the strings are finished. Some manufacturers will loop the ends while others will have them knotted.

Most of the time, gut core strings are looped at the end. The E string in many violins is also usually looped irrespective of the core material used to make the string. Some string makers neither produce looped or knotted strings but instead finish the ends of the string with a bead made out of bronze or copper.

How Do You Choose The Right Strings?

No type of string is necessarily ‘better’ than the other. The type you choose will depend on your needs.  Some factors to consider when selecting violin strings are:

Now that you know more about what violin strings are made of, you are in a better position to choose strings that will deliver the tone and melodies that sound best to you.

Do you have any questions or comments about what violins are made from? Please leave them below—we’d love to hear from you!