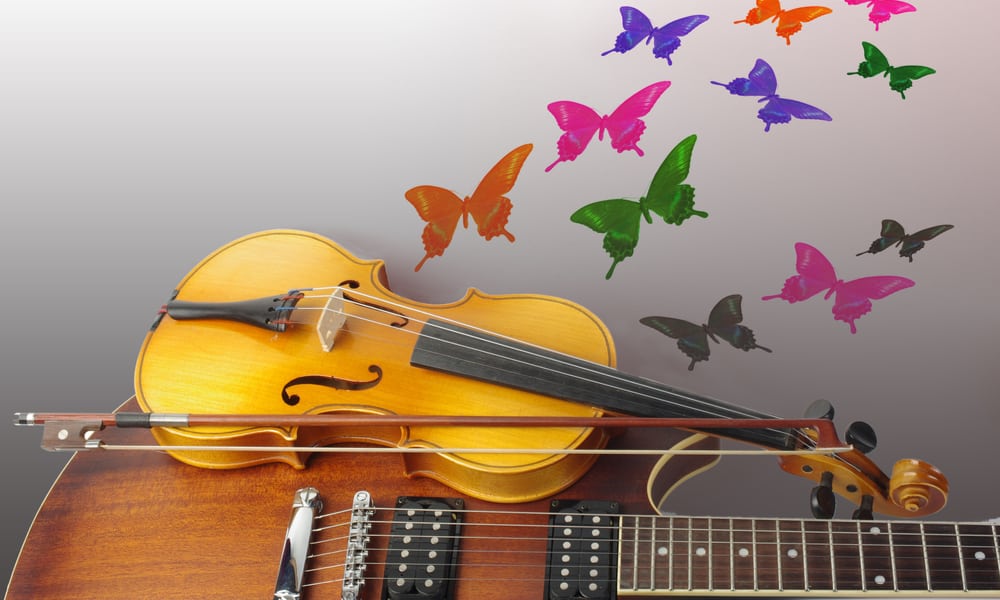 If you are thinking of learning how to play an instrument, you are probably torn between the violin vs guitar. These are two of the most played instrument. In this guide, we’ll explain the differences between the violin and guitar and hopefully, you can decide which instrument you prefer to learn.

Is The Violin Harder To Learn Than The Guitar?

A question that often comes up is whether the guitar is easier to play than the violin.

The violin is classified as one of the most difficult instruments to play compared to other string instruments. Within the first week of practice, a beginner guitarist will play better than a beginner violinist.

In other words, if you decide to play the violin, be prepared to practice for longer before you can produce good music. This doesn’t mean that a guitar doesn’t require much practice: the best guitarists have put in a lot work to become as good as they are.

Differences between the Violin and Guitar

Although both are string instruments, the violin and guitar are significantly different. Here are some of the differences you should know about:

The violin and guitar belong to two different categories of string instruments: bowed and plucked instruments

The guitar is played by plucking the strings with a pick or your finger. To produce sound, the pick pulls the string away from the body of the guitar then lets it go. This action causes the string to vibrate and produce the desired sound.

The violin is a bowed string instrument i.e. the instrument produces sound when a bow is drawn across the violin’s strings. Depending on the technique used to draw the bow, the resulting sound can ring in the air for a long period or it can be short.

Both the violin and guitar have strings but you will notice that the guitar has frets while the violin doesn’t. Frets are the thin metal pieces placed horizontally along the neck of the guitar.

Pressing a string on any two frets produces a specific tone. On the other hand, because a violin does not have frets, finger placement on the string is what determines the sound the instrument will produce. If the finger placement is even slightly off, the resulting sound will be off too.

As you can see, both the violin and guitar require you to learn the fine motor skill of correctly placing the fingers on the strings. But without the frets, it takes more practice to produce a specific sound with the violin.

The order violins and guitar strings are played is completely different. When playing the guitar, the strings are strung from low E, A, D, G, B to high E. Between each note, there exists a perfect fourth.

On the violin, the strings are strung from low to high i.e. from G, D, A, and E with a perfect fifth. As you will notice, this is the exact opposite of the order with which the guitar is played.

In the world of musical instruments, the response time to pressure refers to how quickly the instrument produces sound when it is strung, pressed, or hit.

One advantage the violin has over the guitar is its quick response time to pressure. The violin’s strings are thin and very sensitive and they will produce a sound in response to the slightest touch of the bow.

On the other hand, guitars have thicker strings and beginners will find these strings harder to press to produce the desired sound. Hurting fingers is a common complaint among beginner guitar players who find that they have to use a little extra force to press and strum the instrument.

Players who first pick up the violin and build up hand endurance may have an easier time getting used to pressing down the guitar’s strings.

If you do not get the chance to play the violin to build hand endurance, there are several ways to improve your guitar’s response time to pressure:

With the guitar, you have plenty of versatility so you can experiment and choose which genres of music you would like to master. On the other hand, the violin mostly limits you to classical-style music such as fiddle, Celtic, and country.

The violin is loud and proud. While you can play the guitar quietly without disturbing your neighbors, the same cannot be said of a violin. For this reason, the violin plays an important role as a lead instrument in an orchestral setting.

Although not as loud, guitars make for great accompaniment instruments. This is because the guitar strings can be strung to produce multiple voices and melodies at the same time. However, because it is not as loud, it is easy for other instruments to overwhelm the guitar in a band or orchestral context.

The violin and guitar are great instruments to take up. Beginners might find the guitar easier to learn, mostly due to the presence of frets on the instruments. Drawing a bow across the strings of a violin to produce a good sound requires many weeks of practice. That being said, learning the violin first will shorten your learning curve if you decide to practice guitar later. In the end, you should base your decision on what interests you and stokes your passion.

Do you have any questions or comments about the violin and the guitar? Leave them below—we’d love to hear from you!