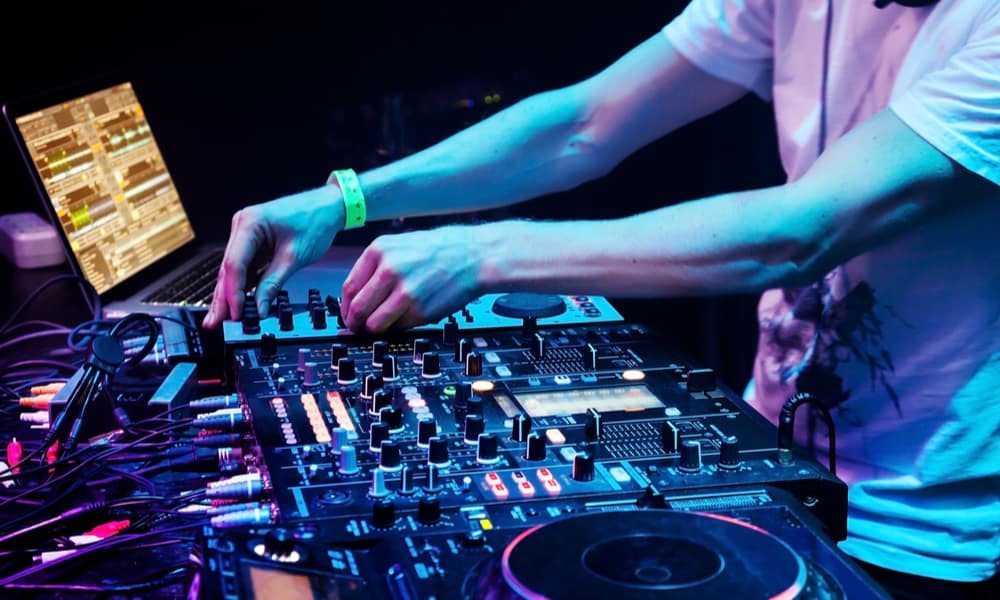 Most people would agree that being a DJ is an inherently cool job. You spend your nights in nightclubs playing music and controlling the dancefloor while you’re worshipped by your adoring fans.

But have you ever wondered what a DJ really does? It’s got to be about more than just putting on one song after another, right? What are all those knobs and buttons they keep touching? Or is being a DJ just about screaming profanities into a microphone all night?

For anyone who’s ever wondered about any of these things and more, here I reveal the secrets of the arcane craft of DJing as I answer the question, what does a DJ do?

If you want a preview of some of the stuff I’m going to be explaining, you can also check out this video before reading on.

At its most basic, DJing involves transitioning from one record to another smoothly and seamless so the sounds of the two tracks don’t clash and disrupt the vibe on the dancefloor.

To do this, the first skill a DJ has to master is blending one song into the next, and this usually involves beatmatching.

Every track has a different tempo, which we measure in beats per minute (BPM), and to mix one song into another, the first thing you need to do is get them playing at the same speed.

Think of the classic image of a DJ, headphones on one ear, one hand on the turntable and the other twiddling a knob on the DJ mixer. What’s he doing?

At this moment, the DJ is listening to the music that’s playing in the club with one ear while listening to a second track in the headphones with the other.

Then, using the tempo control on the turntable, the DJ adjusts the speed of the track being cued to match the track that’s already being played. The goal is to get the two tracks playing at exactly the same speed.

In the old days before digital when we all spun vinyl records on a pair of decks, you had to do this manually. As you might imagine, being able to beat match by ear is not a skill you can pick up in five minutes, and it takes lots of practice for DJs to master this technique.

Nowadays, with modern technology and digital music, you have a readout on your equipment telling you the speed of a track accurate to 0.01BPM, so you can do it visually instead of by ear.

And on most equipment, you can also just hit the “sync” button, so you don’t even need to beat match yourself.

There’s a heated debate about using sync, with some people saying that using it is cheating, and if you can’t beat match without it, you’re just a plastic DJ.

I’m not going to go into the argument here other than to say that beatmatching is only a tiny part of what a DJ does, and anyone who thinks this is the main part of a DJ’s job clearly doesn’t know what they’re talking about.

When you’ve got your tracks playing at the same speed, you can then fade one track in and fade the other one out.

The simplest way of doing this is by playing the intro of the track you’re bringing in over the outro of the one that’s already playing.

This is because those parts of the song are the least busy and have fewer elements that can clash.

If you try to bring in a vocal from one track over the vocal from another, you’re just going to end up causing an inharmonious racket – especially if the songs aren’t even in the same key – and you’ll probably get booed out of the DJ booth.

Rather than doing this, the DJ needs to choose sections from the tracks that will sound natural when played at the same time. Then they can bring the new track in before taking the previous one out.

In the past, DJs used the crossfader for this, but nowadays most people use the channel faders.

In addition to faders, on the mixer, you normally have three EQ knobs for each channel (four on Pioneer’s new DJM-V10), and you can use these to take some of the high, mid or low frequencies out of one of the tracks to make more space for the other one.

For example, a common technique is to cut the low frequency from one of the tracks so the basslines or kicks don’t clash. This can make it sound more natural when you fade one track in and the other one out.

Of course, this is just the most basic kind of transition, and there are loads of more advanced techniques DJs can use.

However, in the simplest terms, this is how a DJ cues up a track, brings it in and takes out the previous one, usually so the crowd doesn’t even realize it’s happened.

Now let’s get a bit more technical. To make the transitions sound more professional, you also need to be able to count to four.

But more than this, tracks are usually organized into chunks of 16 beats, 32 beats or 64 beats, and to pull off the best mixes, you need to know how many beats there are between different sections of a track.

By counting the beats, you can then time it so that, for example, just as the bassline of one tune stops, the next one kicks in, keeping the energy high and your dancefloor pumping.

Again, this is mixing at its most rudimentary level, but it gives you some idea of the basic theory.

6. Reading the crowd and choosing the tracks

So far so good, but to this point, I’ve only been talking about the technical aspects of what the DJ does – but it doesn’t end there.

You can’t judge a DJ on their technical skills alone, and arguably what’s more important is the music they play. (In fact, not “arguably” at all since most people would agree that playing good music is far more important than having dazzling skills while playing awful tunes.)

A good DJ should be totally in tune with the crowd. They can feel the energy they are creating on the dancefloor and they know exactly which tune to put on next.

This is not about how well they can use the equipment, which buttons they press and which knobs they twiddle, but it is an extremely important part of what the DJ does. Not everybody can do it, and this is a big part of why people pay good money to see the best.

It’s not just about choosing the next song to put on though. Elite DJs don’t just play a few good tunes in a random order, they use the music to take you on a journey.

This means they’re not just thinking about which song to put on next, they’re trying to construct a coherent set with a beginning, a middle and an end – and with lots of peaks and troughs along the way.

A top DJ’s set shouldn’t just be an unrelated assortment of tunes. Instead, the music they play should fit together into a complete performance.

The DJ might know where they want the set to go, but at the time they adapt to the reactions of the crowd and the feeling in the club, so each set becomes a unique synergy between the dancefloor and the booth.

At least that’s the theory. Not every DJ can do it, but when you are in a club and listening to a top-level DJ, sometimes magic happens that’s far beyond someone just playing records for a couple of hours..

A DJ’s work isn’t restricted to the performance, though, and any decent DJ spends many hours listening to new music and sourcing new tracks.

There is so much music out there nowadays, probably more than ever before, and the average guy on the street doesn’t have time to listen to it all. But at the weekend, when you go dancing, you want to hear the best new music – and that’s where the DJ comes in.

This is perhaps one of the most overlooked parts of what a DJ does, but unless we’re talking about a wedding DJ whose repertoire consists of the latest top 40 pop songs plus some classics from the last 30 years, a DJ earns a living by constantly hunting for gems to play in the next set.

To make it to the top, DJs need to stand out, and one way to do this is by playing distinctive music and finding lots of tracks that nobody else has.

You can’t spend your whole week listening to new music, so a DJ does it for you. So when you buy your ticket to the club, those hours spent trawling through new releases is also part of what you’re paying for.

And then there’s the time DJs spend practicing. It doesn’t matter who you are, you can always improve your skills, learn new tricks and incorporate new elements into your sets.

You also need to learn the new tracks you acquire so you know them intimately, allowing you to mix them confidently in front of a crowd.

Again, a standard wedding or birthday DJ won’t do this because they’re not interested in fancy transitions or telling a story with their music, but anyone who cares even remotely about the art of mixing needs to devote hours of practice to the craft.

Then, when they get behind the decks at the weekend, they can deliver a performance that will bring down the house and send the dancefloor into a frenzy.

There are different types of DJs, and there are good ones and bad ones, but at the most basic level, a DJ is someone who plays other people’s records, transitioning from one song to another.

However, the best DJs take this to another level, elevating it to a form of art and creating a musical experience that transcends the individual tracks they play.

2 thoughts on “What does a DJ actually do? 9 Things You Need to Know”