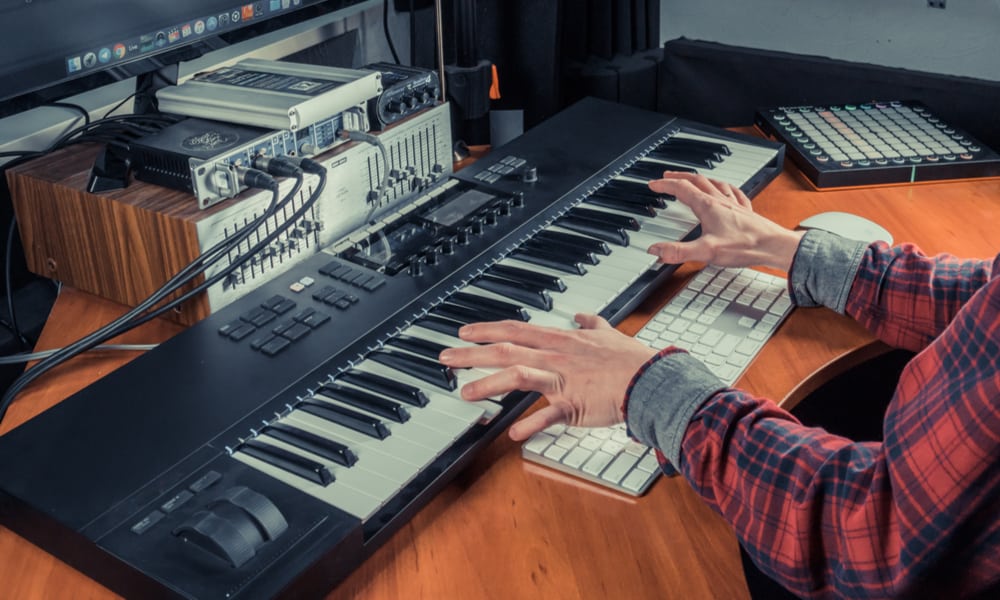 If you have just begun dabbling in electronic music production or are thinking about starting, you will probably have heard of MIDI, an extremely powerful music production tool – as well as MIDI keyboards.

However, if you are just taking your first steps into the world of music production, you probably have lots of questions about what MIDI is and what MIDI keyboards are used for. To help, we answer these questions and more to help you make sense of it all.

Let’s start at the beginning – what is MIDI?

MIDI stands for Musical Instrument Digital Interface, and in a nutshell, that’s exactly what it is – a digital interface for musical instruments.

Before the 1980s, when digital music was still in its infancy, there was no standardized way for digital instruments to communicate with each other or with computers.

This made things extremely complicated if you wanted to connect units from different brands since none of them “knew” what the others were doing.

To solve this problem, MIDI was developed as a standard protocol that allowed digital instruments to talk to each other and computers.

From the early 1980s, several companies agreed to work together to produce a standardized language that all their digital instruments could use – and the result is still in use today, around 40 years later.

If you want a more comprehensive explanation of MIDI – as well as a look at some of the things we’re going to be talking about in the rest of this post – check out this video before reading on.

What is a DAW?

Now we understand in general terms what MIDI is, we can talk about MIDI keyboards – but before we do that, we also need to talk about something else: DAWs.

So what’s a DAW? DAW stands for Digital Audio Workstation – and in essence, it is a program for arranging and composing digital music.

Popular examples include Ableton Live, FL Studio and several others, and they allow you to create and arrange music on your computer.

DAWs all function in broadly the same way, but to take FL Studio as an example, within the software, you can use plugins (essentially virtual instruments) to create musical arrangements on your screen.

You construct patterns on the channel rack and use these to build your track on a grid – and it is possible to do this using just a mouse.

For example, if you want to create a drumbeat or bassline, you can use a drum machine or synthesizer plugin to create the sounds you want and then place the notes on the channel rack where you want them to be played.

However, while for drum beats, this works well, it is far less convenient for something like a bassline – most musicians, even amateurs, will prefer to be able to “play” the music they create rather than entering it note by note using a mouse.

And this is where a MIDI keyboard comes in.

At the most basic level, a MIDI keyboard is the solution you need to allow you to enter music into your DAW by playing the music the way you would a real piano or keyboard rather than entering the notes one by one using a mouse.

A dedicated MIDI keyboard doesn’t produce any sound itself. Rather, it registers your keystrokes on the keyboard and sends that information digitally to the DAW where it is recorded as music.

If you play a note on a MIDI keyboard that isn’t connected to anything, it won’t make a sound – but when you play one that’s connected to a DAW, you will hear the notes and – if you want them to be – the notes will be recorded on the DAW.

So, keeping to our example of FL Studio, the notes you play will appear on the channel rack (or rather, you will see the notes in the piano roll), and you can then combine these patterns and sections of music in your overall composition.

What’s the advantage of this?

What we’ve just described is how a MIDI keyboard can be used in conjunction with a DAW at the most basic level.

There’s more to it than just this since many MIDI keyboards have more functionality than just their piano keys, and we’ll come to that in a moment, but even using a keyboard like this, what are the advantages?

While it is perfectly possible to create music without a MIDI keyboard or other MIDI instruments just using your DAW, most musicians prefer the feel of playing a real instrument.

It’s also much more convenient for creating music with more feeling and nuance.

If you just click the notes into place on a grid, each one will be perfectly lined up and in time, and the volume and envelope of each note will be exactly the same. However, this is not how “real” music sounds.

To create feeling in music, we may put in tiny variations to the timings of when we play a note. Sometimes, we play notes harder or softer, or we hold them longer or let them go earlier.

All these variations are available when using a mouse, but it’s a long and painstaking task to go through note by note adding this information.

And anyway, as any musician knows, a big part of music comes from feeling and instinct. We don’t play expressive music by analyzing each note and deciding it should come a fraction of a second earlier or later – we just play it instinctively.

By using a MIDI keyboard, all of this becomes available in electronic music in an intuitive, tactile and convenient way.

What else can they do?

So as we’ve seen, a basic MIDI keyboard consists of keys for you to play so you can send the music directly to your DAW rather than entering the notes one by one with a mouse.

Furthermore, many are velocity-sensitive, meaning they also detect how hard you hit a key and send that information too – this is something we’ve already alluded to as well.

However, beyond this, MIDI keyboards can offer a whole range of extra features that are designed to unleash your creativity and give you more control over how you play and produce music.

Common features you will find include rotary pitch-bend and modulation, allowing you to play around with the sounds you create even more. Again, these kinds of effects and tweaks can be made using your DAW, but it is much more practical if you can do it without touching a mouse.

This is just an example, but more advanced MIDI keyboards can pack in a whole range of extra features, including drum pads, assignable knobs and lots more.

We don’t have the space to go through the list of possibilities here, but these features are all designed to give you the maximum control over your music from the keyboard while minimizing the need to use the mouse – making the whole process more intuitive.

This makes it easier to play, record and experiment, and most people would also agree that using a MIDI keyboard helps with the creative process too.

Manipulating music in the DAW

Of course, once you have played the notes on your keyboard and they have been registered in your DAW, you can then still manipulate them in any way you like in just the same way as if you were entering notes with a mouse.

Remember, the MIDI keyboard doesn’t produce sounds, it produces digital messages. These messages are recorded as sounds on the screen, but you can then change notes, increase or decrease the length, add effects or do anything else you want with what has been recorded.

So far, we have been talking about dedicated MIDI keyboards, but it’s also worth saying a quick word about electronic keyboards with MIDI capability.

As we saw before, a dedicated MIDI keyboard can’t produce music on its own – it needs to be connected to a computer or other device to convert the keystrokes into sound.

However, many electronic keyboards with built-in speakers are also compatible with MIDI.

This means a keyboard like this will probably come with built-in speakers, and if you connect it to a power source, you can just start playing it and music will come out. You can use this to play music, practice the piano or anything else.

However, they are also capable of producing MIDI signals, and if you connect one to your computer, your computer and DAW will be able to register your keystrokes and the music you play will appear on the screen in the same way as if you were using a MIDI-only keyboard.

This is great if you already own a MIDI-capable electronic keyboard and want to input music into your DAW – but bear in mind that MIDI-capable keyboards usually have much less functionality than a dedicated MIDI-only keyboard.

An essential piece of equipment in any studio

MIDI itself is an extremely powerful tool for electronic musicians, and if you are interested in producing electronic music – either professionally or just as a hobby – a MIDI keyboard is the first piece of equipment you should consider investing in.

They make it far more convenient to play music directly rather than entering it note by note with a mouse, they allow you to create much more expressive music and they are an invaluable aid in the creative process for the majority of electronic music artists.