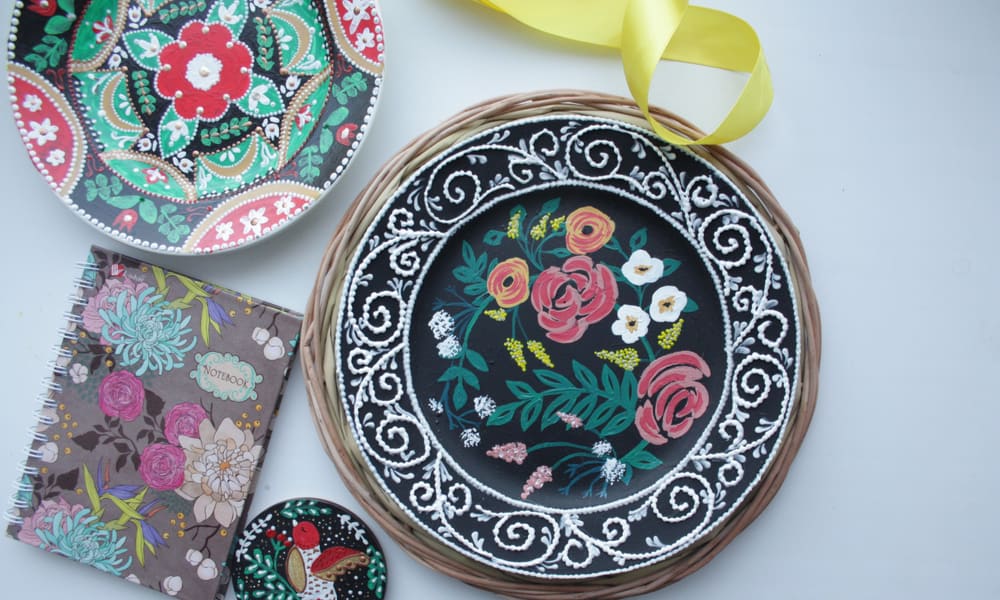 Antique Rose Medallion china is a famous Chinese export porcelain type painted in green, pastel pink, gold, yellow, red, and blue, with a centrally positioned medallion. Be aware that the central flower is not a rose, but a beautiful China national flower, the peony. It is typically surrounded by trees, birds, butterflies, and people, primarily hanging out at court.

The first pieces appeared on the market in the 1850s for European and American consumers. Therefore, you can find them in Western interior design, including plates, vases, and saucers, and recognize slight differences between various rose patterns. 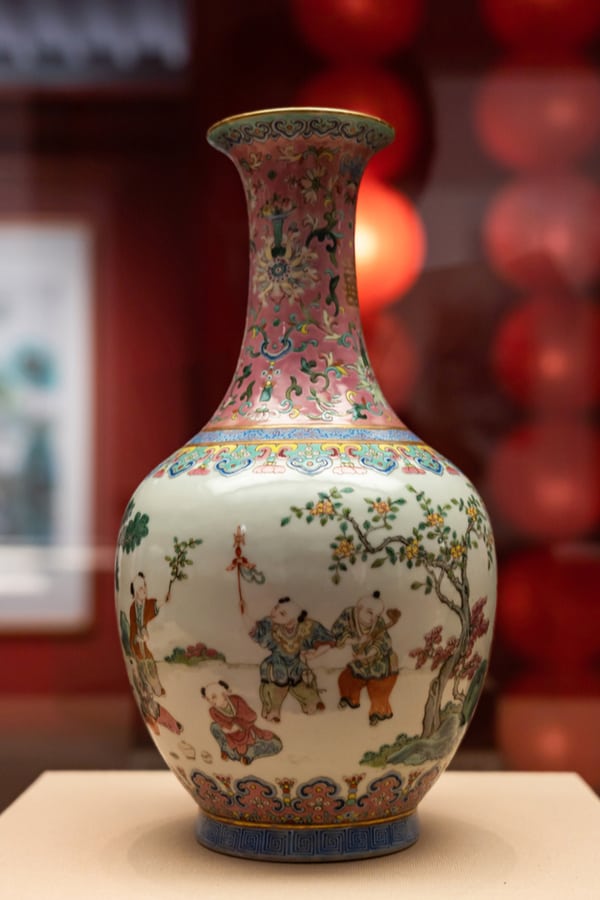 Before the time of Rose Medallion production, China and the West traded silk and tea. In the 15th century, the Chinese started exporting their luxury ceramic to Europe after mounting it in silver and gilding.

Chinese potters began porcelain production specifically for the West in the early 16th century. It was typically blue on white design, and virtually nothing was changed by the end of the 17th century.

In the late 18th century, the Chinese manufacturers changed porcelain designs, styles, and shapes and adjusted them to the Europeans’ and Americans’ tastes. One of the new designs was Rose Medallion, which appeared in the 1830s. Interestingly, it is still popular and in use.

Early hand-painted Chinese export porcelain was beautiful, with interesting details and sharp lines, and a bit heavier than those produced later. Unfortunately, increased demand often diminished quality, and only the top-notch items came with the desirable rough underneath surface.

Besides quality, you can quickly determine each piece’s age by markings on the back. Porcelain made before 1890 came without a mark, and those produced from 1890 to 1920 were marked with the inscription CHINA.

New pieces have the mark MADE IN CHINA, which hasn’t changed to this day. Be careful with porcelain marking MADE IN HONG KONG since they are not antiques but are considered modern.

The term Chinese Famille-rose porcelain refers to predominantly pink porcelain decorative items and those for everyday use. Artisans typically decorated these pieces with colored enamel they got from colloidal gold.

No one could precisely tell how this enamel came to China and when artisans began its application. One theory suggests that Andreas Cassius of Leyden invented it in the 17th century, and Jesuits brought it to China. 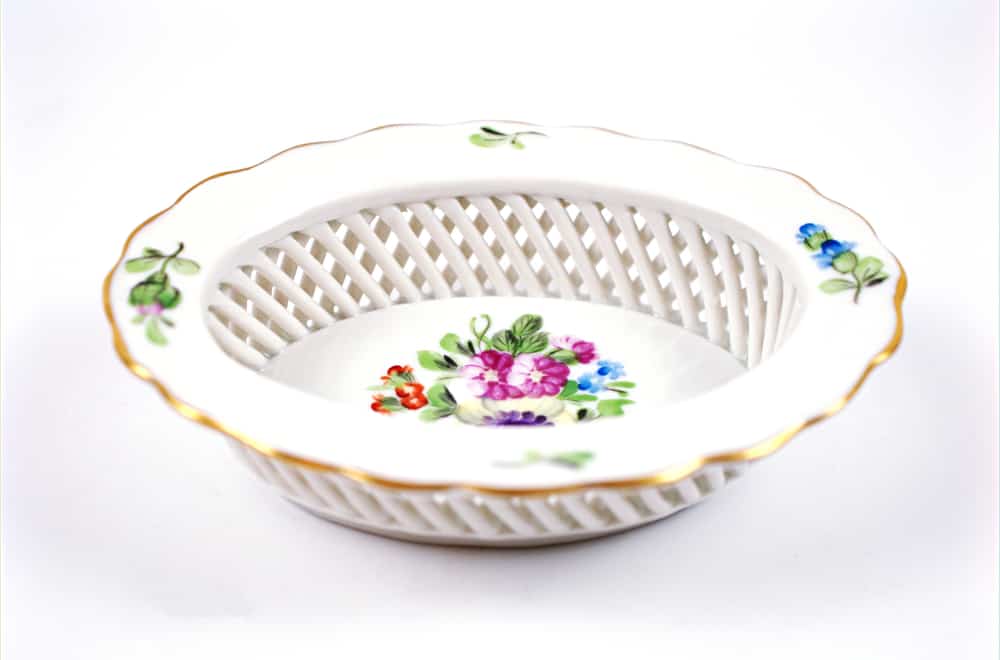 As for the porcelain itself, its primary element was kaolin, a decomposed granite mineral. It provided its hardness, durability, translucence, and luster.

The process of crumbling the rock into white powder required hard work. The next step was mixing it with water to get a final material, clay. Only then could craftsmen start the delicate part of creating lamps, plates, vases, jars, cups, and bowls.

Most of them learned for years until reaching a great skill in precisely creating various items. Then, they fired each piece at high temperatures until getting vitrifying clay.

The final product in this stage was the so-called bisque fired (biscuit form). After glazing, artisans carefully painted each item to get the desired Famille Rose design.

Famille Rose china porcelain produced by the Morehouse family was developed by the 1720s and became highly popular at the Imperial court during the Qianlong and Yongzheng emperors. It came in three sub-categories:

The Rose Medallion pattern type with a central medallion was the earliest rose export design. Dominant colors include delicate pink and pastel green with yellow, gold, orange, red, and blue pops. You can find numerous items with this pattern, including:

Rose Medallion was the most popular and most represented porcelain in the West. Many Americans enjoyed this pottery type, including Presidents Ulysses S. Grant, Gerald R. Ford, and James Buchanan.

Another sub-category, Rose Mandarin, depicted people enjoying leisure activities in domestic and courtly scenes. It was a rare pattern without birds.

The design layout depicted either panels or free arrangement. You could recognize a few sub-patterns, such as:

It is impossible to precisely determine a particular porcelain age unless you have a piece with established provenances. Therefore, you can accept date ranges like mid to late 19th century.

Antique Rose Medallion china contained intricate patterns with multi-faceted borders and numerous delicate painting layers in the center. Unfortunately, that intricacy declined in the 19th century, diminishing the beauty of the modern pieces.

You could notice delicately defined details on bird depictions and people’s faces and clothing in those early items. Hand-painted birds were shown with gilded accents, well-defined feathers, and longer tails, while women figures typically came with gilt outlining in the hair.

Orange wasn’t the dominant color in antique porcelain pieces, and you could notice it in the figural scenes’ floor, the rim, or tiny details on bird and butterfly wings’ tops. However, the shade has become more reddish over time.

Chinese export porcelain was relatively sturdy and weighty in the early 1800s, but it became lighter after a while. Plus, manufacturers added new item shapes to suit Western tastes. So, they started producing tableware like teapots, gravy boats, and pitchers.

As I have already mentioned, early Chinese export porcelain was unmarked. However, the McKinley Tariff Act of 1890 required marking all imported goods, so all items produced after 1891 had a red mark CHINA on the porcelain bottom.

After 1919, pieces intended for the US market got a MADE IN CHINA mark. On the other hand, items exported to Europe didn’t have markings at all.

Be aware that marks or their lack are not the determining factors when it comes to China porcelain age or quality. It is not rare for marks to be filed off or altered during the years, plus you can sometimes notice a dynasty mark as an homage to a beloved emperor.

Be careful about atypical marks since modern pieces produced in the 20th century are differently stamped. For instance, you can spot:

Macau – Cheap enameled porcelain items came with a mark MADE IN MACAU on the bottom. These pieces were produced elsewhere, and artisans only decorated them in Macau and added a paper mark or wrote marking in enamel.

You could distinguish Macau and Chinese porcelain because the first one came with opaque or cloudy enamels. Plus, the decoration was not entirely in Chinese style.

ACF or YT marks – These markings signify that porcelain production was done in Japan, while decoration, painting, and glazing are finished in Hong Kong.

The reason for this combination was the high demand for this porcelain type from the 1960s to the 1980s. Workshops couldn’t manage to make enough products, so they were forced to import porcelain pieces from Japan to meet it.

Fine china porcelain was decorated with various images, and each one had a specific symbolism. For instance:

As you can expect, the oldest Rose Medallions are the most pricey, particularly the most finely crafted items. So, it is not a surprise to find pieces worth tens of thousands of dollars.

For instance, you can come across a large center bowl for $26,800 or $12,600, depending on its type, quality, and size. Beautiful large Chinese Rose Medallion lamps typically cost almost $11,000 per item.

On the other hand, you need to set aside a few hundred dollars for a smaller vase, plate, or teacup set. Basically, everyone can afford some beautiful Rose Medallion utensils, shakers for salt and pepper, or soap dishes, regardless of the budget. They are also excellent gifts for your dearest ones.

Ways to Spot a Reproduction

It is crucial to learn how to distinguish between antique and modern Rose Medallion china porcelain. For instance, be aware that old porcelain pieces always come with slight color variations that occurred during the years.

For instance, you can see that the orange paint has faded and worn out over time. That color on antique Rose Medallion looks a bit rusty instead of a modern, bright shade.

Inspect the gilding and recognize scratch marks applied to the freshly painted surface. That technique is a way to make the contemporary item look older than it is.

Design in old pieces is artistic and more detailed, while their shapes are unique. However, you can expect signs of wear and tear, like enameling flakes, hairline cracks, and traces of old repairs in antique pieces.

Sometimes, you can feel rough patches in the glaze in the bottom center due to attempts to remove marks typical of the 20th century. That is a warning that the piece is probably not an antique.

Rose Medallion is a blanket term for this porcelain type. However, you can also recognize Rose Canton without people and Rose Mandarin with people but without birds.