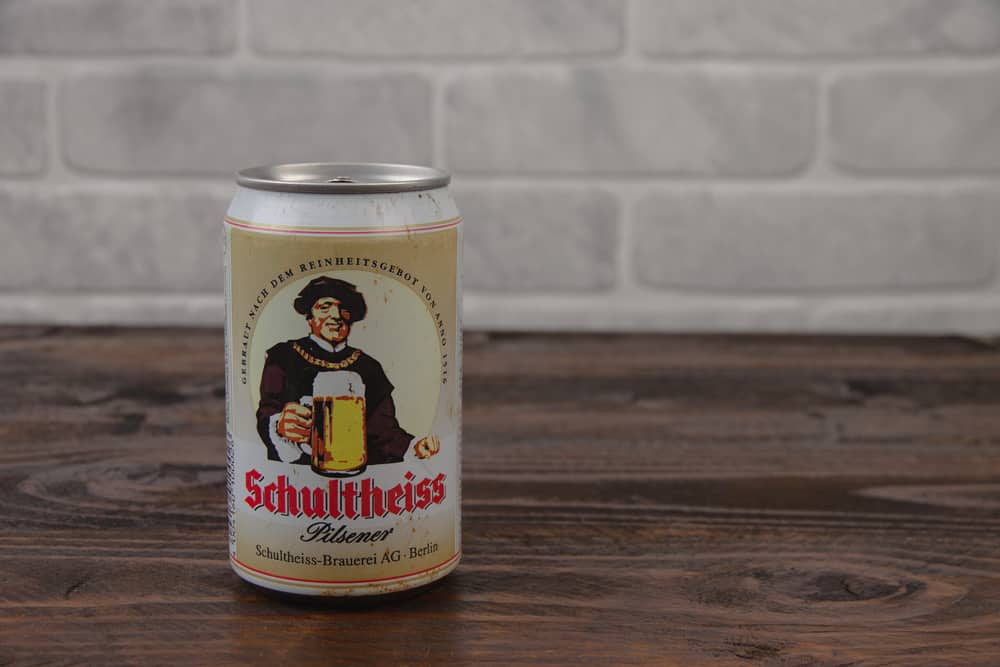 What do you do with your six-pack after you drink it? Frat bros and tech dudes may try to smash it against their foreheads.

Liberal college kids might recycle them, while artsy ones may turn the cans into some DIY delight.

But did you know beer cans can be collectible items? They can sell for thousands of dollars!

Let’s check out the most valuable beer cans.

Most rare Beer Cans Worth Money

Even if you’re not a console gamer, you’ve probably played a few on your mobile phone. So you know that you can sometimes use real-world cash to buy virtual goodies. This can is similar. It’s free, but there’s a contest built around it that’s could get you a million dollars!

It’s why the can is being auctioned and the rate is rising. It’s a small price to pay for a shot at a million dollars, yes? But even if you don’t win the lottery, keep the can. It could be worth a lot more in years to come. The can is a limited edition with only 10,000 cans in the market.

Some of the earliest beer cans were cone tops. Brewers loved them because they could pass them through the same machinery as bottles, so they didn’t incur extra equipment costs. This makes cone top cans quite popular with collectors, even if they’re dank and rusty.

This particular beer can was initially listed at $334. But it went into action and fetched well over $1,000. Makes you rethink that dumpster dive, doesn’t it? Besides, some beer can dealers specialize in restoring old cans, so if you’re worried, you can always get it cleaned up.

Not all beer cans are equal though, so it helps to take to a collector or look things up online. This particular can is old and beaten up, but that’s not why it costs less. It’s a cone top, but the cap is missing. And you can usually fetch a better price for a can that has its cap intact.

This is an IRTP can, meaning the tax was prepaid. These were released during the war years and were often sent to the troops as part of their military rations. Brewers had to send 15% of their output to aid the war effort. These cans had a lower ABV than commercially sold beer.

If you’d like to keep track of collectible beer cans, it’s a good idea to check auction sites. They not only tell you what to look for, but they can also encourage you as you watch live bids and see what the cans sold for. This can, for example, was listed at $410 and sold at $787!

Cooks Ale did release some flat-top cans, but there’s a bigger demand for cone tops. And because many beer cans end up in display cases, it helps that this one is in pretty good condition. The color scheme is appealing too with the red race car and the green body.

To the amateur eye, extremes are attractive. So you may get overly excited about a gleaming can or a terribly beat-up one. But it’s not about the outward condition of the can. It’s about its pedigree. And this Budweiser can is as royal as they come despite its visual degradation.

The can is a pretty shade of red, with faded gold bands that are mostly gone. As a flat top, it’s not as popular as cone tops. You needed a church key to open flat top cans – that’s what caused that triangular notch at the top of the can. But many beer drinkers popped two holes.

Looking to make it big in beer can collectibles? Why not try a can with a bulls-eye painted right at the front! The red target on the white can is sure to grab your attention. And its market value isn’t bad either. These pull-tab cans arrived on the market around the 1970s.

Flat top cans are easier to find than cone tops, especially if they have pull tabs. The flat-top was cheaper to make and ship, and the pull tab was safer for the environment. Earlier zip-top cans caused lots of injuries as people accidentally stepped on that sharp disposable beer lid.

Beer cans started with both cone tops and flat tops. Flat tops won out, with zip tops following to deal with the challenge of church keys. Then came pull tabs to undo the damage of those slip-off tops. But it took a few design experiments to settle on the right one. Hence this set.

It’s a set of 5 prototype cans that show the thinking at Anheuser-Busch HQ. This would make a gorgeous display in your beer museum and makes a great story for show-and-tell when guests are touring your collection. Note the variety in the shape of the openings and tabs …

When you’re exploring cone top cans, it helps to flip the can and look underneath. You’re checking for two factors – one, church key holes, and two, surface curvature. It matters because flat-bottom cone tops and worth more than concave bottom cone tops like this one.

You may wonder why a cone top can would have notches in the bottom. It’s because collectors preferred the cap intact, so if someone knew they planned to sell the can later, they opened it from the bottom instead. Of course, they’d have to be careful to avoid the fizzing!

How can you tell a zip-top can from other flat-top cans? Simple – the can will have its entire top missing. This is because the aluminum zip tops were designed to be peeled off and tossed. Those round, sharp discs often ended up injuring beach-goers, campers, and animals.

As a collector, you may think the rarity trumps the missing top – since these cans went out of production around 1975 – too many complaints! If you’re collecting for re-sale, keep in mind you might not get the price you want for these. Consider seeking intact flat tops instead…

Here’s an example of a cone top can with its cap in place. Bottlers loved this design for its cost-effectiveness. Drinkers liked it because it was easy to tip the can and pour it into your beer mug. And to keep the cap intact, consumers would open the bottom with a church-key.

With this can though, the treatment was a little different. Instead of notching the bottom, whoever had it used a nail to drill a hole in the cap instead. This might diminish the value since you can’t restore the bottle cap. The sides of the can have some minor damage too.

Beer can lots can be a treasure trove for beginners. You get a full set to sift through and you might find some treasured finds in there! But be careful, because the seller probably salvaged the best ones, so what you’re getting is an average set of cans that may not be worth much.

That said, a collection like this was gathered by a prospector. You can tell because although many of the cans are pull tabs, said tabs are intact, meaning the person who drank the beers was deliberately prepping the cans for storage, knowing they’d be worth something someday.

Boomers get all excited about Woodstock while millennials tend to rave about Coachella and SXSW. These festivals are fun and draw crowds. Plus, a lot of people make lifelong friends and partners at these things. So you might sell a commemorative can from one of them.

The cash value on this can isn’t high, but you could buy it for speculation. One day, someone who made a soul connection at Houby might be willing to fork out a lot for a can like this. Plus, because it’s based on an event, it’s easy to authenticate the date on such collectibles.

Beer cans were introduced after The Prohibition, and over the years, they were printed with all kinds of images from famous actors to brand logos. This fed into the can collection craze that started in the 70s. And since cone tops faded out in the 50s, they were in high demand.

Cone tops could be high profile, low profile, or J-profile. This one has a high profile and a flat bottom, which raises its value. The playing-card image on the front is rare as well. This combination of features make the can a valuable find and it may end up fetching quite a bit!

The earliest beer cans were quite different from what we use today. The sides were flat, and were harder, like pickle cans or soup cans. Today, we use aluminum cans with crimped tops that crumble easily. We also use stay tabs that remain on top of the can after you open them.

This Storz can is in bad condition, but because it’s hard-sided, it has survived where modern cans would not. The can was punched at bottom of the can, leaving the top intact. And the beer itself was a slow-aged beer, with a cheeky hint on the cover art. (It’s the wigs for me!)

Before Prohibition, beer was largely sold in bottles, kegs, or on tap. So when cans were introduced, not everyone knew what to do with them. It’s why some of the earlier cans had opening instructions on the side, and yes, that adds to the can’s value as a collectible item.

Brewers would also release party cans that had a bigger capacity (e.g. a quart, two pints, or four pints). This sample is one of the larger cans, and it’s placed next to a contemporary coke can for comparison. It’s a low-profile cone top can with its cap intact and a flat bottom.

Visually-driven collectors will prefer to invest in clean, shiny cans like this one. And the design is pretty too – a glossy dark green can with gold stars and a bold red label. It’s a flat top can with two typical church-key notches punched into the top of the can. It’s well kept.

The can is in pristine condition with no rust and just a few scoff marks on its rims. It may not be as valuable as the seller believes, because it’s a simple straight-sided specimen with no special features. But its new look and bright colors will look gorgeous on any beer display.

Our last collectible proves that if you find the right specimen, even broken-down beer cans can be valuable. This one is a J-profile, meaning its cone is medium height with a crimped rim, forming that J-effect. It doesn’t have its cap and is in terrible condition, but it’s all good.

The can is a pretty yellow with a castle painted on it. And because the can has its copyright date on it (1934), it’s one of the most valuable beer cans in terms of antiquing. That date confirms it as one of the first can released post-Prohibition. Plus, it’s an IRTP can, so yay!

Do you have any tips for finding the most valuable beer cans? Share them in the comments!

1 thought on “17 Most Valuable Beer Cans Worth Money”