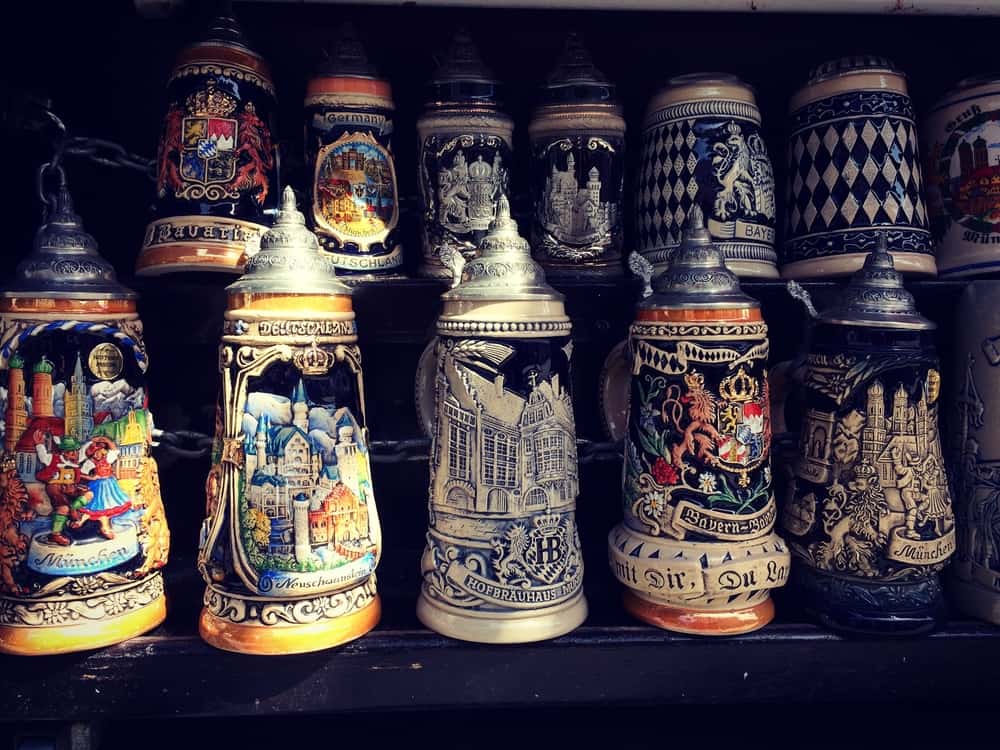 Maybe you’re happy drinking beer out of a bottle, can, keg, or beer mug. But beer steins add a sentimental flavor to your tipple. And as long as you don’t smash them while yelling ‘Cheers!’ they make priceless collectibles. Their cash value depends on their manufacturer.

Top makers include Capo-di-Monte, Mettlach, and Royal Vienna. Steins with military ranks are precious too. Beer steins can be made of ceramics, wood, glass, metal, or ivory. They have a lid and sometimes a thumb lift. Let’s find the most valuable German beer stein markings.

Beer steins are intended as souvenirs, so before we explore individual pieces, it helps to understand the anatomy and significance of beer stein markings. These may include:

Now that we have the basics down, let’s look at the most valuable German beer stein markings.

The reason beer steins had lids was to keep out flies and other bugs. This became a crucial safety factor during the bubonic plague outbreak of the mid-1300s. So having a working hinge on the lid and a lighter or paler internal surface make your beer stein more valuable.

The ‘P’ marking on the outer bottom means this is piece is a prototype. That may be why it has a poem rather than pictorial decorations. It’s pre-owned so it has minor imperfections. The sides of the stein are tinged yellow with age, but it’s an attractive patina all the same.

While the mug itself could be metal, ivory, wood, or stone, the lid was often made of pewter. Flat lids were prized because they were easier to carve and therefore had more intricate décor. But WWII stein lids were molded from 3 or 4 pieces so they were more elaborate.

This beer mug has the marks of use. The base is chipped and the lid is loose. But because the lid mimics a spiked war helmet, the stein goes up in value. It’s a colorful piece with soldiers on horses and lots of textual detail. The stein is 9 ¼ inches with a ridged handle.

Today’s counterfeiters are good at faking the age of a piece, so you can’t always tell if it’s genuinely old. But German beer stein markings and decorations often told stories from the bible, animal-based fables, or German folk tales. The style of clothing can be a hint as well.

This mug features a lady in a pink dress serving patrons at a beer garden. The distinctively green handle with its ridges and leafy designs is a typical Hauber & Reuther feature. The German beer stein markings under the mug identify it as German, from lot number 444.

In Germany, beer is typically served in a maas aka 1 liter. But you can find 0.5l and 0.2l mugs too. As for the artwork, you’ll rarely find nudes unless they’re angels, with their naughty bits tactically covered. This beer stein is a good example and features cherubs draped in sashes.

This particular beer stein has a G on the handle as well as a model number 231. It features angels and a dancing couple. The stein itself is made of porcelain but its lid is pewter. The mug holds 1 liter, is 12″ tall up to the lid, and 6 ½ inches wide including the handle.

Sometimes, it’s the visual appeal of a beer stein that catches your eye. And this curvy brown one is quite a beauty. It’s possibly West German since western steins had a brown finish while eastern ones were more likely to have a white or blue glaze. It’s marked 1028.

This stein is made in the style of the mid-1800s. It has a stone body and lid with a ring of pewter on the cover. The sides are decorated with ivory-colored relief carvings of a cozy couple. The beer stein markings on the bottom include Made in Germany and Mettlach.

When a beer stein is handmade, it will have human errors. They might have coloring outside the lines or weird paint flecks. These flaws may have been frowned on at the time, but they add value today. On the other hand, Westerwald beer steins were mass-produced.

They were made from molds, which lowers their uniqueness and value. But they can still be worth something, as this mug shows. It’s a ceramic piece with a pewter lid and cobalt blue sides. And because it’s a handmade limited edition piece, its price is likely to rise over time.

When beer stains were given to soldiers (or their families), it was a mark of honor to mark their bravery. This sentimental factor raises the value of the beer mugs. The steins had the soldier’s name and rank, so you can instantly identify their exact date. That raises prices too!

These military mugs are called Regimental Beer Steins. And this one features a soldier flirting with a girl who looks a lot like snow white. It’s hand-painted, with a carefully carved lid and a thumb lift shaped like a bird. The bottom of the beer stein is marked Geschultz.

Traditional beer steins were made of wood, stone, or blown glass. And to compete with pricy porcelain imports, Germans developed faience. It was a ceramic material coated in a glaze of tin oxide to give it that white porcelain shine. Faience gained mileage in the 17th century.

With newer pieces, it helps to have a certificate of authenticity, and this beer stein has one. The mug features a deer or antelope, which makes sense because animal motifs were a popular choice. The stamp under the beer stein confirms it’s hand-made (handgemalt).

It helps to know beer steins were intended as treasured collectibles. Yes, you could drink out of them, but their main purpose was social and aesthetic. So a beer mug that tells a story is valuable because it sparks conversation during a casual drink-up or a home visitation.

This beer stein wins on both counts. It’s set amid the pyramids, where a musician is trying to calm an angry alligator (or crocodile or dinosaur) with his violin. The lid is inlaid and the bottom of the mug has faded etchings that identify the manufacturer and batch number.

Crystal beer steins look elegant and delicate. They can be especially pleasurable if you enjoy the color and texture of beer because you can look through the glass. But they’re tougher to authenticate because you can’t stamp the beer mug without damaging its see-through surface.

The set comes as a pair and each mug sits on a pewter drip tray – its own customized coaster. And they’re heavy too – a couple of pounds if you weigh the mug and the tray together. The beer mugs are embellished with sheaves of wheat while the lids have triple-hare logos.

Dealers will sometimes tell you handmade beer steins are the only ones worth collecting. But as these mugs got more and more popular, mass-produced versions hit the market. Still, even these machine-made mugs can be worth something if they have the privilege or provenance.

This beer stein is unique because it’s a one-time mug in a subtle shade of beige. The color gives it a timber-like tone and it’s decorated with relief carvings of ladies dancing. The flat lid has detailed designs of vines and petals carved around its rim. But the bottom has no markings.

When you first spot the title of this product, you’ll be forgiven for thinking this beer mug sings! You may assume it has some kind of music box or jingle built-in. But it’s the carvings that are lyrical, with the brightly dressed male musician holding a long traditional horn.

He’s sitting next to a lady and perhaps planning to serenade her. Both are wearing brightly colored clothes and are surrounded by vibrant nature scapes. These images are in deep relief, and the clumsy coloring suggests they’re hand-painted. The lower edge is scalloped.

Once you’ve been working with collectibles for a while, you’ll learn to recognize the styles of the most valuable German beer stein markings ad brands. That way, you can spot them at a glance, even without the logo label. It can be a useful skill for unstamped finds like this one.

Like the previous beer mug, this one is musical. But it depicts a troupe of traveling bards. That lead singer seems a little drunk though – his buddies are all that’s holding him up! And as a special decorative detail, the lid and thumb lift are both modeled after little dancers!

You can sometimes guesstimate the tie period of a beer stein by looking at the images. After the 1800s and 1900s, ordinary scenes were depicted. And during the World Wars, it was all about the military. Alternatively, just grab a tankard (metal stein) that has a date stamp on it!

The mug was a gift to celebrate 15 years of marriage (aka the silver wedding anniversary). It shows a picture of a happy couple toasting each other, and the inner lid has the name of the recipients and the date of their wedding. The beer stein doesn’t have any maker’s marks.

You may have noticed we have a lot of Mettlachs on this list of valuable beer steins. It’s one of the most sought-after brands, and you need to double-check that you’re not handling a fake. This particular piece has a painting of a pensive mountain man enjoying his beer.

It’s a curious artwork because the man is framed by painted buttons, so he looks like a hanging mounted on a wall. The bottom of the mug has multiple verification stamps including Villeroy & Bosch. It also says Geschultz, which means ‘copyright’ or ‘trademark’.

What’s your experience with the most valuable German beer stein markings? Tell us below!