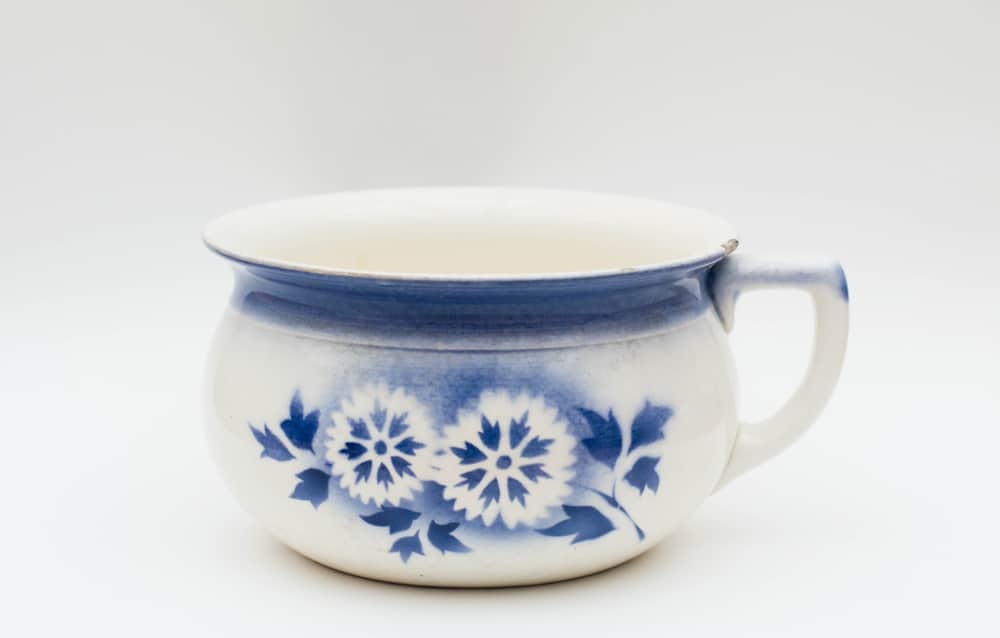 Whether we want to admit it or not, chamber pots are at the cornerstone of history.

Before the advent of indoor plumbing, they kept homes and hospitals clean. And despite their crude function, chamber pots often have a ‘vintage’ look about them that is so popular with modern collectors.

Today we’re going to explore what makes a chamber pot a big seller at auction. From explaining their significant history to uncovering rare editions, to price guides and where you can buy & sell – we’ll help you turn your chamber pot into a pot of gold!

History and usage of a chamber pot

Although not the politest of topics to discuss, chamber pots are engrained in our history. They helped mark major advances in sanitation and hygiene, from the 6th century Ancient Greece to the late 1800s when flushing toilets became mainstream.

The core function of chamber pots was allowing people without indoor plumbing to relieve themselves. People used chamber pots at night-time instead of going to an outhouse in their garden.

Some houses, particularly from poorer classes, may not even have had access to outdoor facilities, making chamber pots their primary sanitation.

Sometimes the contents were collected and dumped in communal cesspits or used by farmers as fertilizers. But if people lived in urban towns and cities, it was usually dumped out of your window!

It’s thought the modern slang word for toilet ‘loo’ comes from the chamber pot era in France when ‘gardez l’eau’ was called out from a window, which meant ‘watch out for the water!’.

Chamber pots evolved both in style, size, and materials used. Early 16th and 17th-century chamber pots were simplistic, with a wide rim base and a short handle.

By the late 1800s and early 1900s, chamber pots became more decorative, and it’s these styles that often fall into the hands of collectors. They are often mistaken for a bowl or food container.

Chamber pots also had a vital function in hospitals and were often nicknamed ‘Looking Glass’ pots because doctors examined them to diagnose patients. These pots were often made from enamel and were white, making them easier to keep clean.

Chamber pots came in many different types, materials, and styles. Certain types are considered very rare and valuable. These include:

In the 1800s, women were often corseted and couldn’t easily go to the toilet. The bourdaloue was a special chamber pot that allowed women to relieve themselves while standing.

The bourdaloue was named after French Jesuit Father Louis Bourdaloue because his sermons were so long women had to take toilet breaks during them.

They were often very sleek in design and are often confused with other antiques by collectors. They came in two designs for both men and women. Used for long-distance travel, usually on public transport like trains, boats, and carriages. Instructions were usually printed on the pot, explaining how users should use and dispose of the contents.

Bedpans were most commonly found in hospital settings. They had flat edges to prevent any leakage and prevent bruising. They also had a long, distinguished handle for easy use and removal.

Another way of separating chamber pots by type is by their materials.

Chamber pot often mirrored the socio-economic status of the family. Poorer families would own cheaply made tin or leaden pots, with wide rims and no lid attached.

Commodes were common and helped hold the chamber pots in place, acting as a supportive seat during use. It was common for upper-class families to have multiple pots and commodes in bedrooms and drawing rooms.

Some chamber pots even fit inside an armchair with a special hinged seat, often called a ‘closed stool’.

How do you date a chamber pot?

Chamber pots have been used extensively throughout history with little changes until much later on in history. Precise dating can prove difficult.

Some usual times for the chamber pot industry include:

The 1400s-1700s: Pots were made of earthenware and had a coarse texture. By the mid-1600s, lots of pots came imported from Staffordshire Pottery in England.

The 1850s-1900: The Victorian era saw ceramic become a very popular material. More decorations were used, particularly in cobalt blue. The most common materials were stoneware and china.

Are old chamber pots worth anything?

Vintage chamber pots are valuable for several reasons. Sometimes people appreciate their historical significance, or because they’re highly decorative. Others want to repurpose them as a planter, pitcher, or container.

Here are some factors which can influence the value of your chamber pot:

One of the most important factors to consider is the condition of the pot.

Chamber pots were made sturdy, durable, and resistant. It’s common for many of them to be sold in excellent condition at the auction. A small chip or crack can impact its value. It should also have great color and not be faded or stained.

Simple, well-maintained pots fetch anywhere between $20-$50 at auction. Examples include:

As with any antique, certain manufacturers attract more attention than others.

Unfortunately, it wasn’t common practice for manufacturers to brand chamber pots. Collectors compare pots with other distinctive-looking poetry and ceramics of the time to infer who might have made what. Some companies known to produce chamber pots include:

Although chamber pots had only one purpose, they became more elaborate and beautiful as time went on. The more decorations your chamber pot has, the more valuable it becomes.

Things to look out for include:

Owing to their unusual design, bourdaloue chamber pots are highly collectible, and arguably some of the most expensive chamber pots on auction sites.

If a bourdaloue is in great condition and has a unique decoration or color scheme, it can easily fetch anywhere from a hundred dollars, to a couple thousand.

Potters often designed chamber pots with caricatures on their bases to attract attention from the public. They often parodied politicians or public figures.

Because of their controversial designs, these political pots are highly sought after by collectors and museums alike. Some are even considered priceless antiques.

One of the most common victims was Napoleon, who had several chamber pots dedicated to him. Lucky him! Two examples include:

Where can you buy and sell a vintage chamber pot?

Chamber pots are often mistaken for other kinds of pottery and ceramics. These include food containers, large pitchers, planters, and a vase.

There are also several names and nicknames people use instead of chamber pots, which can be confusing. If you’re keen to buy a chamber pot, but can’t find anything online, try these other names:

You can sell chamber pots anywhere antiques are sold. This includes yard sales, public auctions, and online. Here are our favorite Internet sites you should consider: