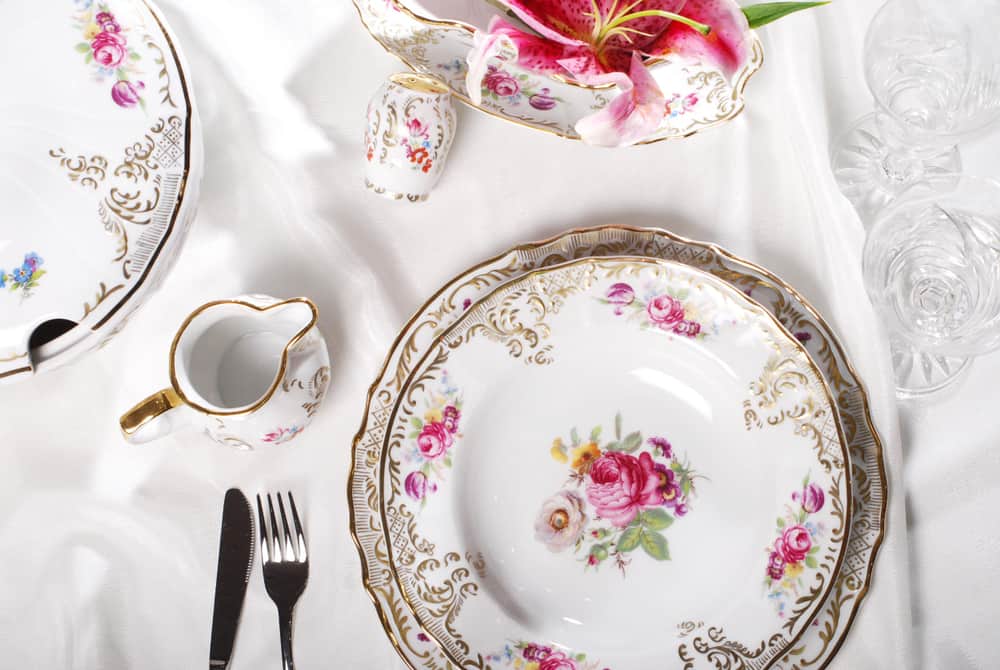 Do you have an antiquer china piece or set at home? Maybe some plates, dinnerware, tea sets, vases, or something similar? China can come in many different forms which can also have widely varying value, based on its brand, design, age, and a few other factors. So, it can be difficult to know how valuable your china piece is until you’ve managed to identify it. So, let’s go over the complicated but fun process of antique china patterns identification.

What are the 5 most valuable and collectible china patterns?

Depending on the manufacturers and age of your china, it can either cost millions of dollars or small change. Before we go into antique china patterns identification, let’s take a look at some of the most valuable and collectible china patterns out there for reference’s sake.

Froda Danica is one of the most valuable china patterns. It’s only produced to order so it’s not some mass-produced pattern you can find in every other shop. Instead, depending on its age and condition, an antique Flora Danica can cost anywhere between $1,500 and $43,000. There are imitations, of course, but you can easily distinguish the original through its back stamp – more on that below.

Meissen’s Ming Dragon Red pattern is more on the affordable side of valuable antiques but it still frequently sells for anywhere between a few hundred and several thousand dollars, depending on the condition and age. It’s very eye-catching and distinguishable thanks to its signature red Chinese dragon motif.

Lenox makes new holiday-themed plates and sets almost every year and they typically sell for a few hundred dollars per set. If you find an antique, however, you can expect the price tag to jump significantly.

Portmeirion’s Botanic Garden pattern has been in production since 1972 and new ones are made yearly. Despite being a fairly new face to the fine china scene, this British-made pattern has quickly become a staple among many communities and especially Korean families. Both new and antique sets can sell for hundreds of dollars and above.

Blue Willow – The Spode Collection, Johnson Brothers, and others

This classic blue pattern is made by various reputable and high-value manufacturers and it’s what a lot of people imagine when they hear about fine china. New pieces often go for a few hundred dollars with older antiques sold for well within the 4- or even 5-digit range, especially when there’s something peculiar about them.

How do I identify an antique china pattern?

Figuring out what kind of china you have is key for determining its value. However, this can be pretty tricky sometimes, especially with off-brand or older china. So, here are 6 steps for how you can try to determine the type of china you have:

1. Use light to determine the material

The first and simplest method for differentiating fine or bone china from ordinary porcelain is holding the piece up to a bright source of light. Fine china should be a bit more translucent than porcelain and bone china should be significantly more translucent than both. So, if the light is easily coming through the cup or plate you’re holding, you’re almost certainly dealing with bone china.

Fine and bone china alike tend to have a softer and more ivory or creamier color than porcelain. The latter is typically mostly white so this is a simple way to make sure you have actual china on your hands. Note that this is especially true and easy to notice for ivory china but there is still a color difference between porcelain and fine/bone china.

3. Listen to your china

Another handy and quick method to use is to just hold the china piece and lightly tap it on the edge with a coin. Make sure that you’re holding the piece with just a couple of fingers to allow it to resonate adequately. After that – just listen. Porcelain will typically produce a more high-pitched sound whereas fine china will give off a lower sound by comparison.

To make sure you’re adequately comparing the two, it helps to have a second piece of the same type to compare with (tea cup with a tea cup, plate with a plate, etc.). This isn’t a surefire method as the design, coating, edging, and exact materials of each china piece can vary. However, it is a useful thing to try together with everything else.

4. Where is the back stamp?

Most china pieces will have a maker’s mark, logos, or another identification mark at the bottom of the piece. This will almost always tell you who the manufacturer of the piece was and will often also tell you where and when it was glazed. Even if there is no additional information, however, a simple manufacturer’s logo can be enough to date the china as most manufacturers change their back stamps every few years.

So, just check out the stamp, compare it with any of the many online china stamp catalogs online such as Stanley Gibbons, Kovels, Gotheborg, or XA Business, and that should be enough for all your antique china patterns identification needs.

If your china doesn’t have a stamp, that doesn’t necessarily mean it’s a fake. Some early sets didn’t have stamps, especially when it comes to bone china. Consider getting your piece to a professional appraiser if you know it’s very old and suspect it isn’t fake despite the lack of a stamp.

Most fine china will have some type of edging, be it gold trims, gilt, a black edge, or anything of the sort. Many manufacturers have specific types and patterns of edging that can serve as an extra identification method.

6. Are there any specific images and motifs?

Similar to the edging, the rest of the china’s pattern design can also be very telling. Specific flower species, images of people and particularly ladies, certain birds and other animals, as well as some Asian motifs are used by certain brands. This makes them easily identifiable by just taking a picture of the pattern and looking it up online.

Q: What is the best way to sell old china?

A: Being a seller of fine china can sound complicated but it really isn’t. There are a plethora of online auctions and sites such as eBay as well as online marketplaces like Etsy, all of which work beautifully for the vast majority of antique china you might want to part with.

Another good option is to contact a replacement china company, especially if you want to do things quickly and don’t necessarily expect the highest possible return. The opposite of that would be to use an actual action house. This method takes time as the auction house will do its best to find the best possible price for your set.

This is a good option if you know what you have is truly valuable. However, keep in mind that the commission the auction house will get is not insignificant either.

Q: What is ivory fine china and is it made with real ivory?

A: Ivory china is quite popular and initially controversial as it sounds like it’s made out of real ivory. That’s not the case, however. Ivory china is really no different from ordinary fine china or bone china in its material composition, it just has an ivory color. So, if you like how ivory china looks but you’re worried about whether it’s ethical or not – fear not, it’s made of the same materials as all other china.

A: These are three different but similar materials. The main thing that sets bone china and both types of porcelain china apart is the materials used. Hard-paste china is the original material that came out of China and was traditionally used for china dishware and sets. It was historically made of kaolin clay with a bit of ground alabaster but today the kaolin is more often mixed with quartz.

And then there is bone china – this 18th century British innovation was made by adding ground bone ash to the kaolin clay, giving the china a thinner and more transparent look.

As for whether you’re dealing with ordinary porcelain or actual china, remember that the difference there isn’t so much in the materials used but the temperature at which they’ve been hardened.

As you can see, antique china patterns identification is tricky at first but not all that complicated once you know what you’re doing. It also means the difference between getting the right price for your fine china piece and getting swindled out of something valuable. The same is important when you’re the buyer instead of the seller as you don’t want to overpay for simple porcelain. When buying, it’s crucial to always look for a back stamp and identify it online.