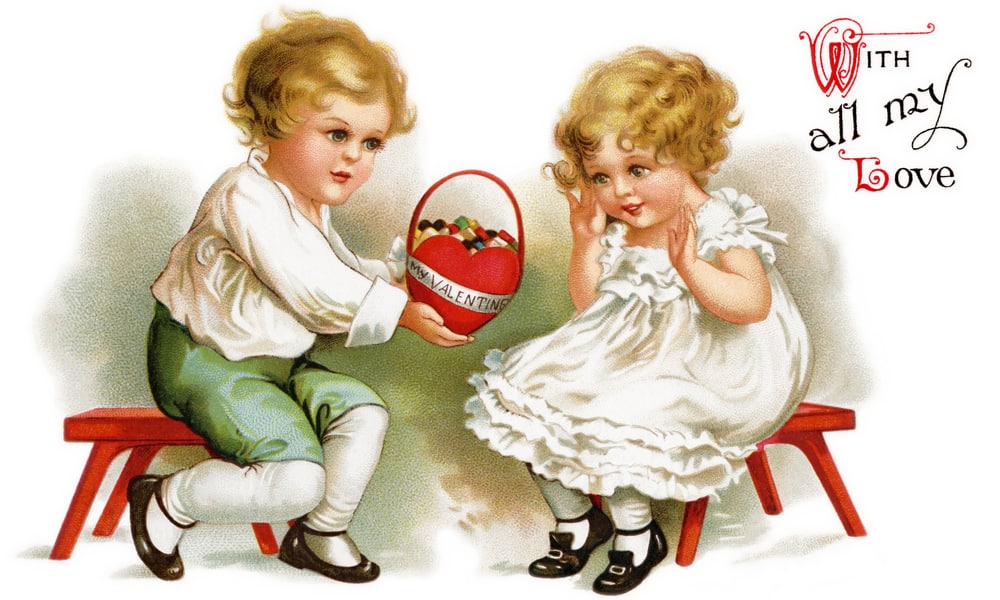 Valentine’s day is one of the most beloved holidays nowadays, and many people enjoy sending best wishes on this day, celebrating love. You can go to any gift shop and buy cards to make your sweetheart happy, but sending vintage Valentine cards can be an enjoyable experience and a genuine surprise.

On the other hand, many ephemera collectors look for naive and elegant cards, clearly showing how romantic, funny, and caring people used to be. If you like these lovely cards, you can consider starting a new collection right now. Let’s take a look. 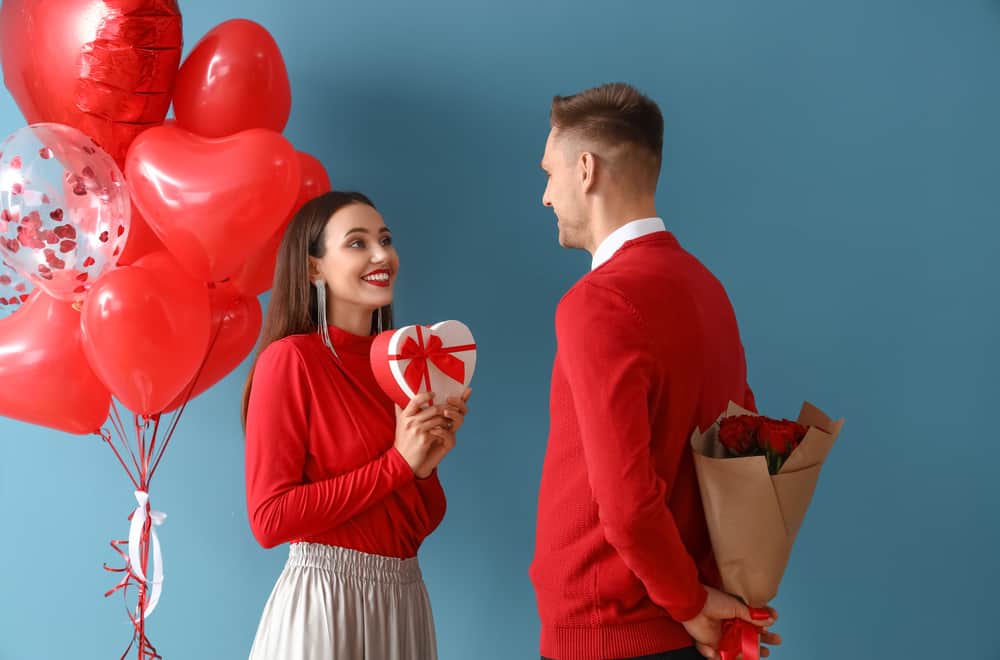 The strong Christian beliefs were a reason for Romans to imprison St. Valentinus and sentence him to death in the 3rd century. According to legend, he helped the jailer’s blind daughter see the night before the execution and left her a note signed with the words FROM YOUR VALENTINE.

Until the 5th century, people in Rome had a habit of honoring pagan goddess Juno on February 14. However, Pope Gelasius declared this date a St. Valentine’s Day in 498 AD with two goals. He decided to end the pagan celebration and honor the martyr Valentinus.

No one connected St. Valentine’s Day with love and romance until 1382. That year, English poet Geoffrey Chaucer wrote a poem about birds choosing their mates on this day. That was how the beautiful holiday started.

Nowadays, people exchange about 145 million Valentine’s Day cards every year. Believe it or not, most go to teachers, but you can also find kids, mothers, spouses, and even pets on the list.

Richard Cadbury created the first box of Valentine’s Day chocolate in 1868 and gave it to his wife.

At least 1,000 admirers send letters addressed to Juliet’s home in Verona on Valentine’s Day each year.

If you come to Finland that day, you will enjoy their Friend’s Day celebration (ystävänpäivä) when people show appreciation, love, and respect to their close friends. 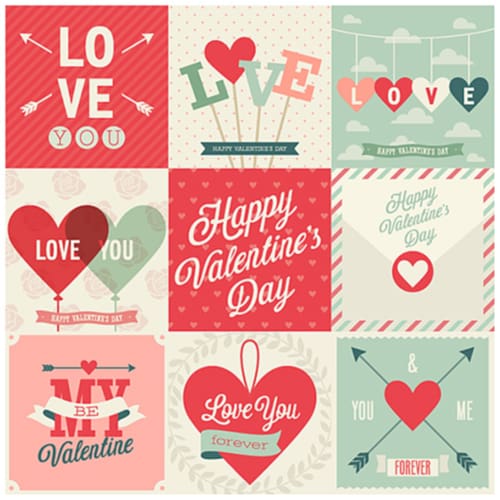 No one could precisely tell when and why the first Valentine cards were initially sent, but historians know that hand-made pieces were popular in the early 1800s. The first known Valentine’s card was posted in 1806.

Men quickly accepted the new idea and the custom of sending greeting cards to their Ladies. On the other hand, women often sent best wishes to their female friends on decorative, sometimes gilt-edged fine paper sheets.

By the 1830s, people sent tens of thousands of cards on the eve of Valentine’s Day. In the very beginning, people created their own cards by hand and decorated them with gem imitations, fringes, ribbons, spun glass, shells, and pearls.

In 1834, Joseph Addenbrooke designed paper lace, and it became a trendy card decoration almost immediately. After the chromolithography process became cheap, it was used for Valentine card production in the 1860s.

This card type became trendy as soon as publisher John McLaughlin introduced them in 1858. You can find naughty, comic, and even cruel pieces that sharply contrast lovely and delicate cards printed during previous years.

However, people adored them as a way to poke fun at annoying dandies and couch potatoes.

In the US, Valentine’s cards became popular thanks to Madam Esther Howland. She got an idea to start celebrating Valentine’s Day, the feast of love and devotion, with lovely cards.

People soon accepted the custom of sending themed cards to their beloved ones. Thanks to her effort and entrepreneurship, Massachusetts became the center of Valentine card manufacturing in the US. 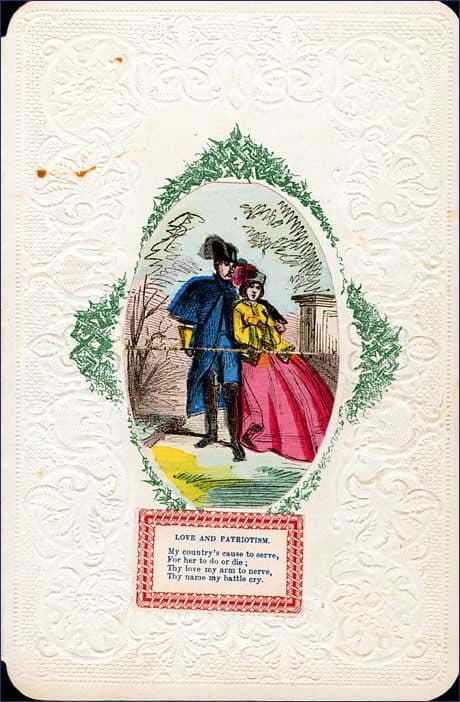 Interestingly, the Valentine card’s popularity boomed after the Civil War. According to the New York Times, from February 4, 1867, New Yorkers sent 21,260 Valentine cards in 1862.

In the late 1860s, Valentine cards were inexpensive. However, it was clear that sending Valentine’s cards tradition became a big business after the Civil War. The practice of sending these lovely cards went out of fashion in the late 1800s, but Valentines came back in grand style during the 1920s.

Nowadays, you can find some of those cards produced in the mid-19th century and pieces that come in typical themes and styles created in other eras. Understanding each era’s hallmarks will help you date a particular Valentine’s card you are interested in.

Early Victorian Valentine era from the 1850s to the 1880s

The custom of exchanging Valentine’s cards started in the 1850s when Esther Howland began producing them. However, many Americans and Britons enjoyed creating hand-made cards themselves. Themes and styles typical for this era included cards:

Later Victorian Valentine era from the 1880s to the 1900s

During the years, mass-produced Valentin cards became widely available. People often chose inexpensive lithographed cards during this period, and most were created with various motifs and materials, including:

Designers gave up traditional fan-shaped and rectangular cards during this era, and their looks became more diverse and detailed. Therefore, you can find numerous pieces with different styles and fun themes, such as:

Valentine cards produced in this period celebrated new inventions or provided support during the difficult war times. So, you can expect to find those featuring:

Besides witnessing the fashions, people’s habits, and historical events of their producing year, some vintage Valentines can be valuable. The price range is vast, and you can find them for $2 to $100. However, several unique pieces can be worth over $1,000.

The British Royal Mail estimates that a hand-made, fold-out puzzle Valentine card designed in 1790 is the most expensive piece they have. Experts believe that it could probably reach at least £4,000 ($5,000) at auction, but there is no intention of selling at the moment.

Valentine card prices have remained stable over the years without too many fluctuations. However, you can face another problem. Since collectors regularly buy the oldest and most beautiful pieces for private collections, some sought-after cards have become scarce on the market.

Since most people are unaware of these cards’ real value, the best option you have is to ask a professional for advice. For instance, you can have it estimated by an ephemera specialist in local antique shops or the National Valentine Collectors Association or check at the Kovels.com website.

There are a few factors that affect old Valentine’s card value, including:

As you can imagine, well-preserved vintage Valentine cards can be worth money. Antique pieces connected to historical events, current news, and pop culture at the time of printing are particularly desirable.

Unique and exciting themes and designs always increase card value. For instance, collectors seek after cards with Disney characters and those from popular movies and books.

Pieces with a written song and the sender’s recorded message are relatively rare and in keeping with the fashion of the particular time. Plus, you should set aside more money for pieces signed by a celebrity or historical figure.

When it comes to Valentine cards, their condition is crucial. Collectors look for top-notch pieces without ugly stains, traces of bending, and torn parts.

Interestingly, some people like written cards, but some prefer blanked. Basically, each of these cards will find its buyer sooner or later.

Some Valentine cards are more available than others. The rarest are the oldest, hand-painted ones, while you shouldn’t have problems finding commercial, mass-produced pieces.

Collectors are prepared to pay more for hand-made cards featuring ribbons and paper lace and the early 1900s versions with folded honeycomb paper. Other desirable pieces are Victorian three-dimensional Valentines with die-cut images.

You can also find widely available comic Valentine cards popular in the 1920s. However, they are usually undesirable and cheap because of their insulting content.

Antique stores and pawn shops are the most convenient places to buy vintage Valentine cards. You can also check old scrapbooks hidden in your grandma’s attic or flea markets.

The Net is the best shopping resource nowadays, particularly if you look for a specific theme or pieces from a particular era. If you pick out this option, the best sale websites are: 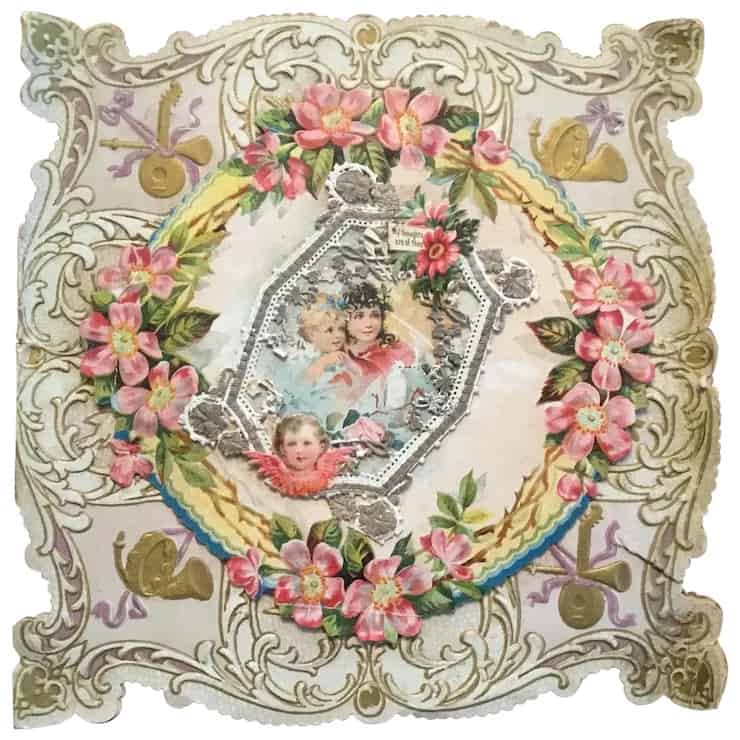 This popular online antique store is an excellent source of vintage Valentine cards from any era. You can find Victorian cards there and any possible card type printed up to the 1980s.

Remember that most cards available are unique, so you should grab the desired one as soon as you spot it. 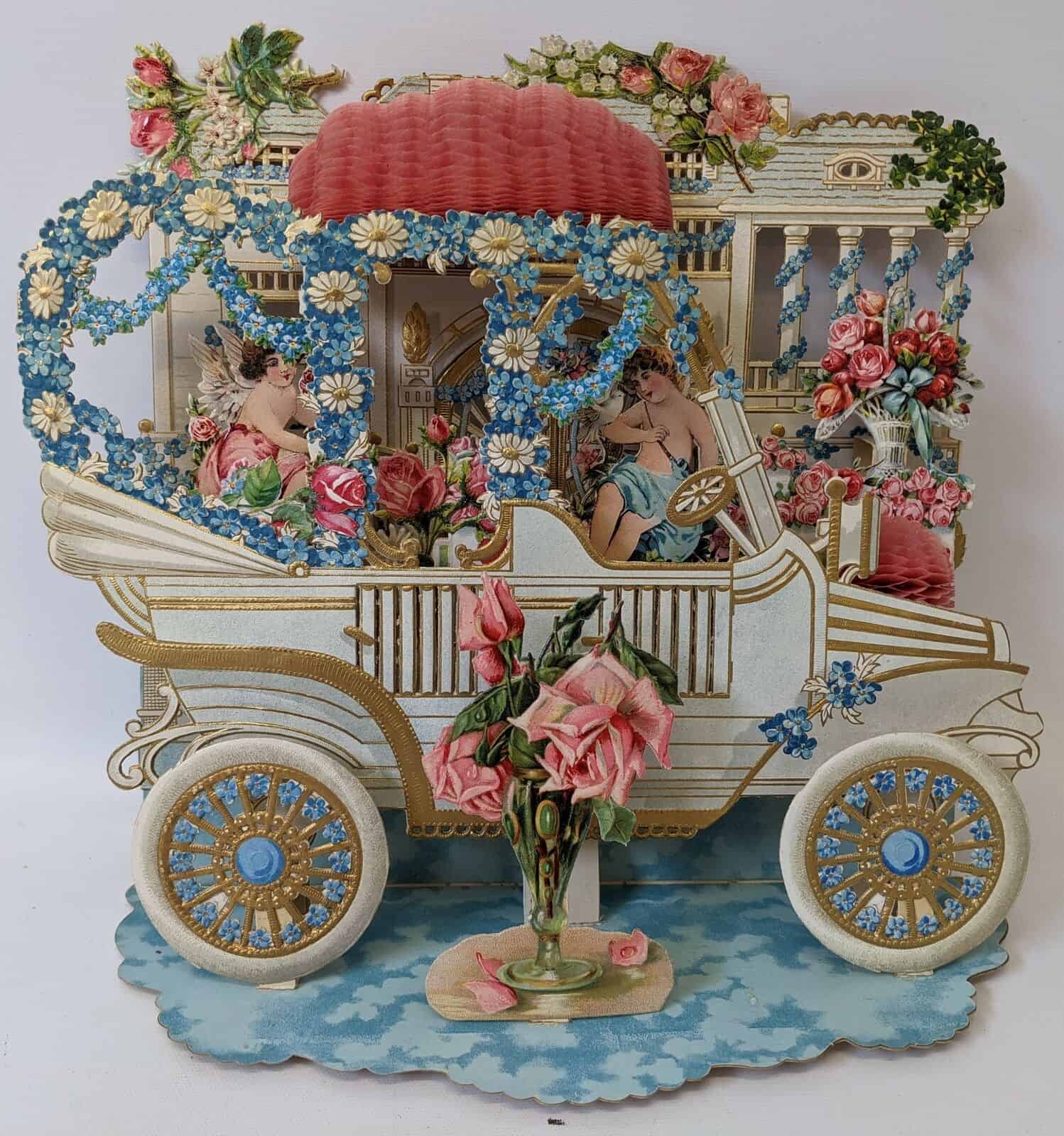 If you look for expensive and ornate vintage Victorian Valentine cards, this site is an excellent place to visit. After some search, you can also find hundreds of unique and beautiful Valentines covering numerous themes and coming from different eras.

The site also organizes auctions, and you can expect regular card selection changes. If you are looking for a specific piece, the best option is to be up to date and check the site frequently. 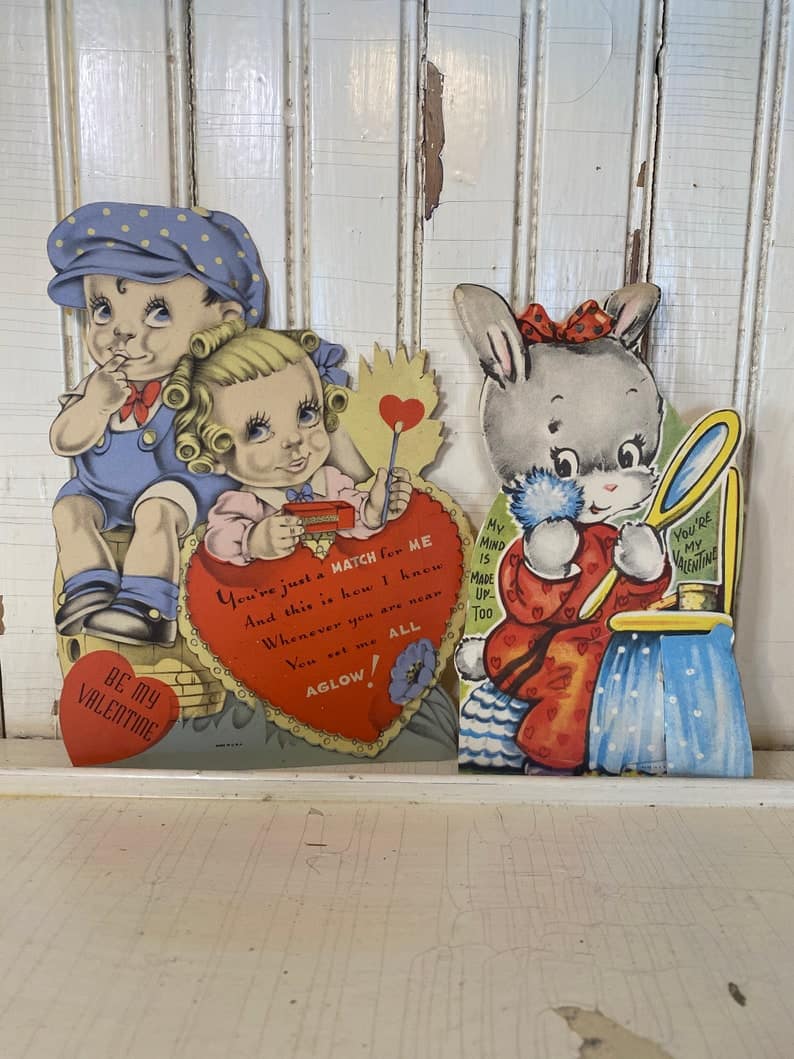 Believe it or not, thousands of sellers offer vintage Valentine cards on this site. It is estimated that you can find over 3,000 different pieces there printed from the 1900s to the 1970s. It is crucial to saving an interesting card since the selection changes daily. 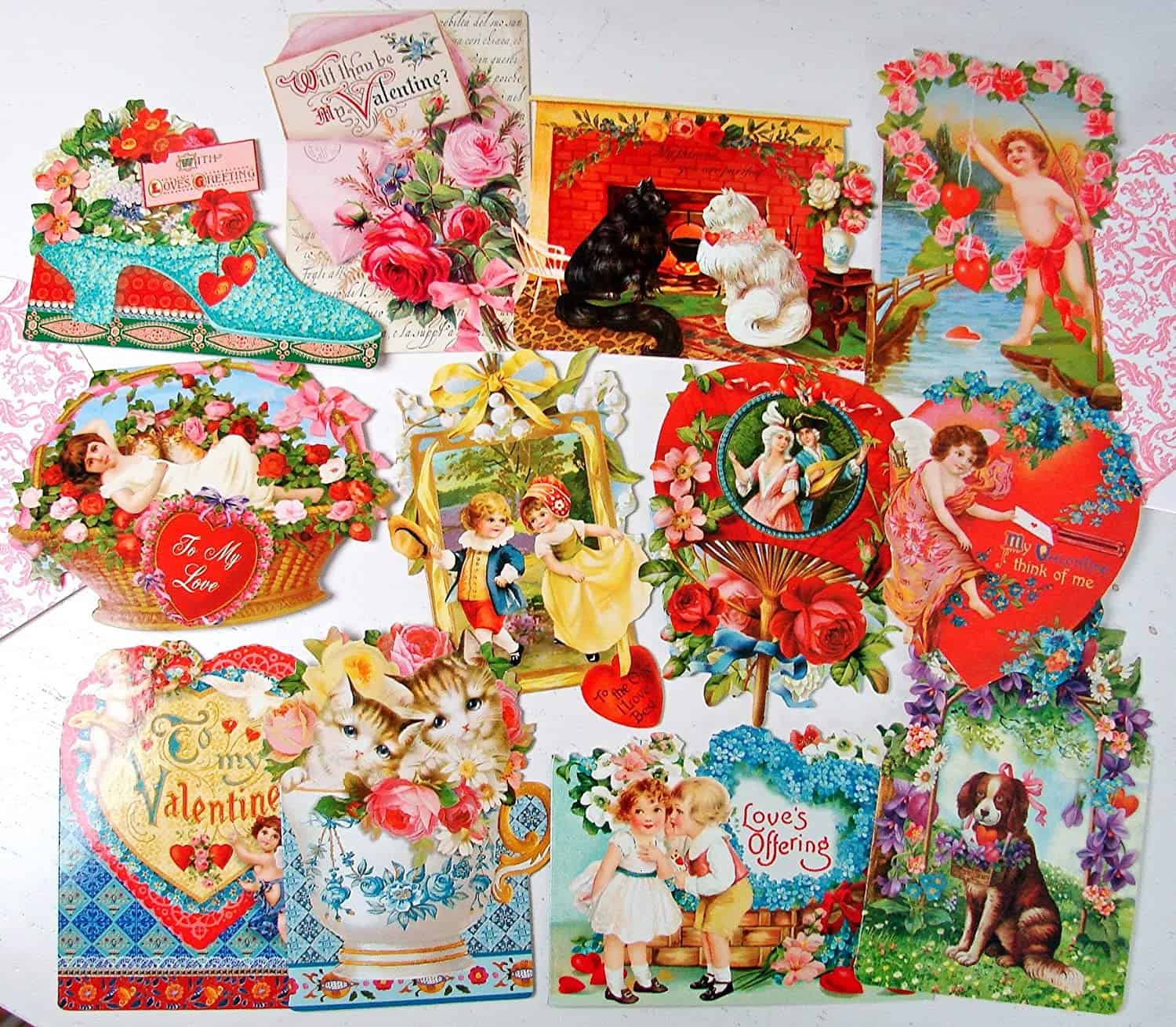 Most people believe that this site is not the right place for vintage Valentine cards, but it is not entirely true. In fact, they offer a wide selection of cheerful and affordable pieces you might be interested in.

Not all vintage Valentine cards are worthless or inexpensive. Even though you can buy most pieces for $10 to $50, some can be pricey. Therefore, you should be careful when finding grandma’s forgotten and unused cards in your attic.

On the other hand, you may discover one with sweet wishes that remained a testimony to some ancient love story. So cute!