Skip to content
Noname Antiques » 16 Most Valuable Beyblades Worth Money 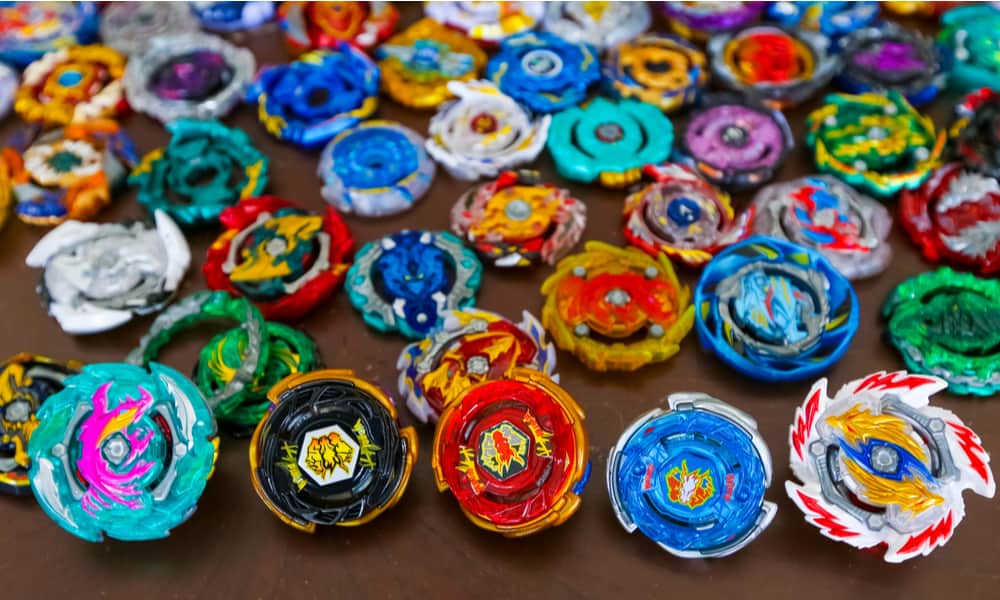 Beyblades first burst onto the toy scene in Japan in 1999. Based on a traditional spinning top, they were launched alongside a manga comic series of the same name. It was a winning combination, and soon the toys were selling like wildfire.

Today, they’re widely collected. And rare Beyblades can fetch very big money indeed. So what models should you be looking out for? And how much could you expect them to make?

That’s what we’re going to find out! Step this way as we search out the 16 most valuable Beyblades in the world … 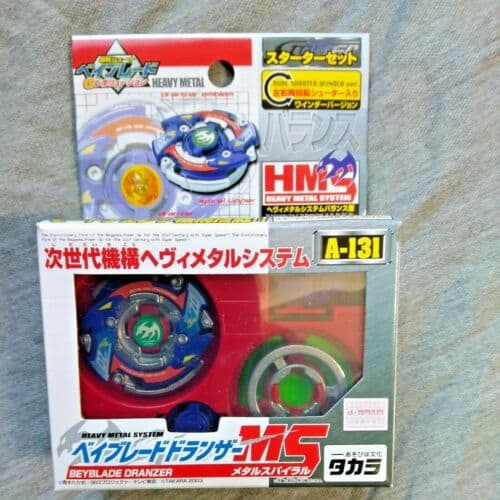 This Dranzer MS Beyblade has the model number A-131. It’s the Beyblade used by the character of Kai Hiwatari from the Beyblades manga comics. Kai is the tallest of the Beybreakers at 5 feet 6 inches – this is, after all, a Japanese series!

The Dranzer was Kai’s seventh Beyblade. The MS here stands for “Metal Spiral”. The toy features a manual switch that allows it to switch between “attack” and “stamina” modes.

The Dranzer was manufactured for nine years by the brand Takara. It was eventually discontinued in 2009. A model from 2003 recently came up for sale online, in its original box. The box was in excellent condition and appeared to have been unopened.

This A-126 Dragoon MS Beyblade was licensed to Hasbro, who produced it for Western markets.

In the manga comics, Dragoon is the spirit of the wind. He’s a dragon-like beast with a blue body, long neck and tail. Dragoon is the companion of the character Tyson. Tyson used the power of the wind to attack his enemies, spinning his Beyblade so fast that it generated a mini typhoon.

This Beyblade came up for sale in 2022. It was in perfect condition, never having been removed from its box. The box was in great condition too, and featured artwork depicting Dragoon.

At auction, it attracted over 100 bids, eventually selling for $410. 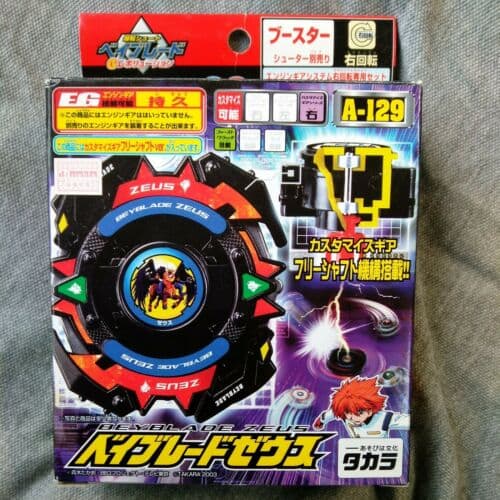 The A-129 Zeus was manufactured in Japan between 2000 and 2009. It’s part of the Beyblade G-Revolution series, and in the manga comics, it belongs to the character Brooklyn.

This particular example was manufactured by Takara in 2003. It came in its original box, but wasn’t in mint condition. The box had been opened – which of course, it was supposed to be! This is, after all, a toy designed for children to play with.

But for collectors, an unopened box adds significantly to the price they’re willing to pay. Even so, this Beyblade was desirable enough for one buyer to spend $450 to add it to their collection. 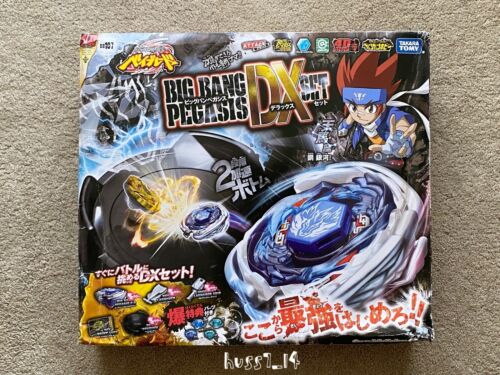 This set from Takara includes a range of different pieces. There’s a Big Bang Pegasis F:D (a recolor), a 105RF in blue, and an 85 XF in teal. It also contains a silver BeyLauncher and a silver three-segment launcher grip. And there’s a black BeyStadium Attack Type too.

The toy is part of the Beyblades Metal Series, and was manufactured in 2010. It was made by Takara Tomy, a result of the merger between Takara and Tomy in 2006.

This example came up for sale online in 2022, in its original box. It was in great condition, and a buyer snapped it up for $500. 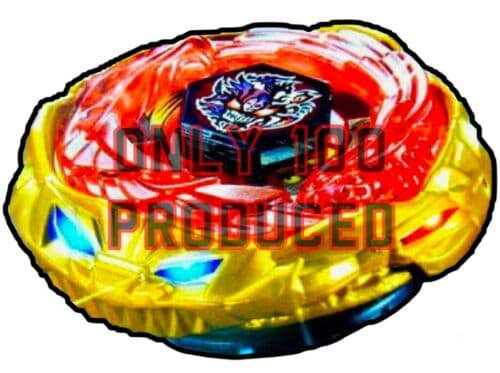 This Golden Diablo Nemesis Beyblade is very rare. Only 100 of them were ever made, and they were offered as prizes through a lottery run by Strongest Dragonis 4D. This was a magazine and Beyblade strategy guide produced by CoroCoro.

A scratch-card was included inside the magazine. And if you found a winning scratch-card, you could claim this Beyblade. It featured a gold 4D metal wheel, a red 4D clear ring, a clear black X:D, a black face and stickers.

One example was offered for sale in 2022. It was in perfect condition, in its original box and sealed plastic bag. It netted the seller an impressive $500. 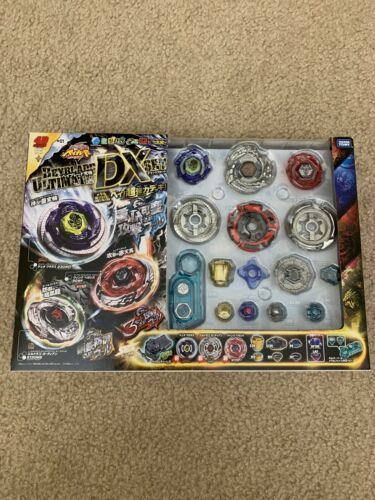 This is another set including a number of different Beyblades. It was made by Takara Tomy, so dates from after the merger of the two companies in 2006.

This set came up for sale online in 2022. The Beyblades and the BeyLauncher were still sealed inside their original transparent plastic bags. But while the outer box was present, it showed signs of wear and tear.

That didn’t put off the buyers! One collector paid the princely sum of $575 to take it home. 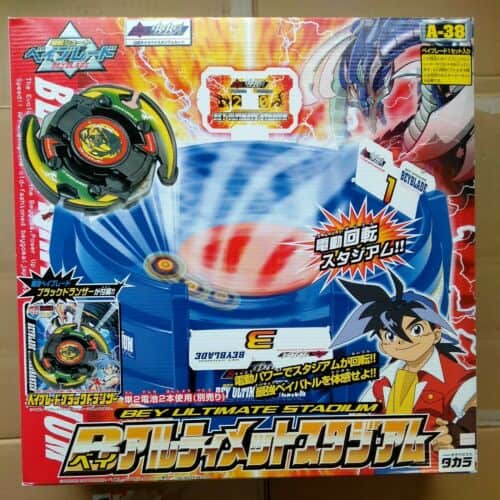 This Ultimate Stadium set included the Black Drazer, one of the Beyblades belonging to the character Kai Hiwatari.

It came from the Bakuten Shoot Beyblade Series, and it was manufactured by Takara in 2001. That makes it one of the earlier Beyblade toys in existence.

One example was offered for sale online in 2022. It was in good condition, with all the contents sealed inside their plastic bag. The box was present and in good condition too. But it had been opened, and there were minor signs of shelf-wear at the corners.

A collector was still happy to pay $600 to snap it up. 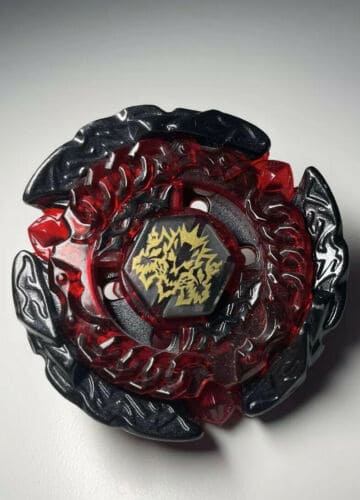 This striking Beyblade is deep red and black, a color-way known to some as “Hell fire” or “Inferno”. It was a limited edition Beyblade, with only 100 ever made. And that makes it highly attractive to collectors.

It was produced as a lottery prize by CoroCoro, with scratch-cards included inside magazines. If you were lucky enough to get a winning scratch-card, you could redeem it for this Beyblade.

One example came up for sale online in 2022. Unlike many valuable Beyblades, it didn’t come with any original packaging. The winning scratch-card was gone too. And it had been used, with a couple of scratches on the plastic to prove it.

But it was still a rare thing. The seller was asking $677, but accepted a lower offer. 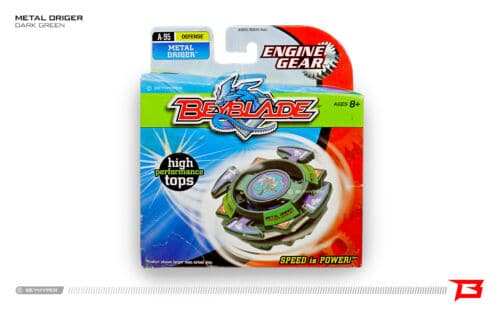 This A-95 Metal Driger was manufactured by Hasbro somewhere between 1999 and 2005. It was associated with lots of different characters, including Max, Kai, Tyson and Ray.

The set included an unassembled Beyblade together with a launcher, sticker sheet, ripcord and engine gear metal tip. It also included a manual.

One example was presented for sale online in 2022. All the contents were present and correct, but the box was in poor condition, with severe creasing at one corner.

That damage no doubt affected its selling price. But it still did well, earning its British seller $680. 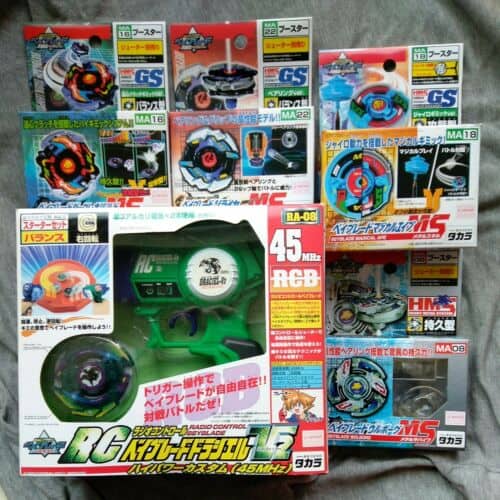 The Dragoon V2 was the fifth Beyblade of the character Tyson Granger. It was an Attack Type Beyblade, and evolved from the Dragoon V. The next model to follow was the Dragoon G.

The Dragoon V2 featured in both a film and a TV show titled Bakuten Shoot Beyblade V-Force. That gave it plenty of exposure, making it a very popular toy. It was manufactured by Takara in 2002.

This example came up for sale in 2022, in its original box complete with launcher. The whole package was in great condition, with no buckling and minimal signs of wear and tear. The Japanese seller earned $710 from the sale. 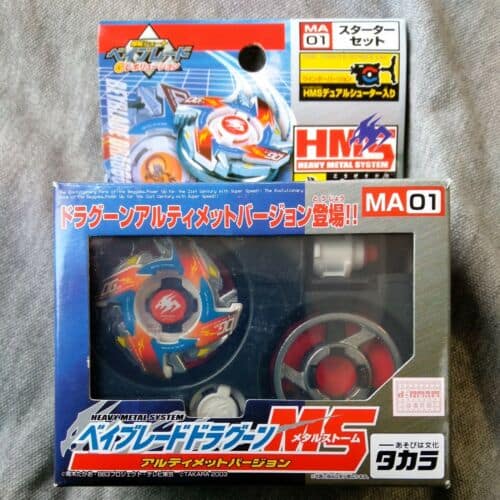 The Dragoon MS Ultimate Version was another Beyblade belonging to the character of Tyson Granger. This one had a spinning core, a feature that made it very effective in attack. That was one of the key reasons it became highly sought after by collectors.

It was manufactured in 2003, and today it’s very hard to find. So when an example came up for sale online in 2022, collectors were willing to spend serious money!

This example was offered by a Japanese seller and was in excellent condition. It came complete in its original box, which had just minor signs of wear and tear at the corners. One determined buyer shelled out $1,000 to add it to their collection. 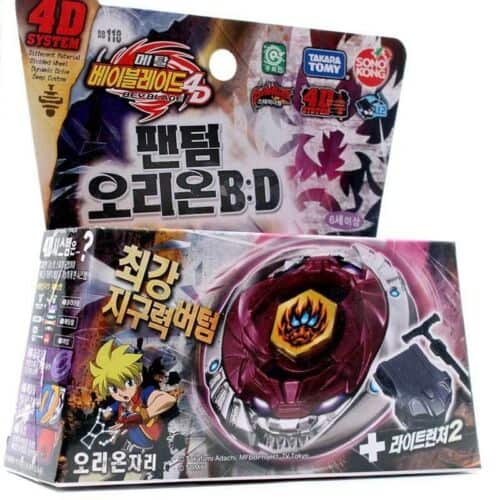 This 4D Phantom Orion isn’t, apparently, particularly rare. One US seller was offering over 300 of them online. But that doesn’t mean it isn’t still a very desirable Beyblade.

It was manufactured by Takara Tomy. The examples on sale were all in brand new, factory sealed condition. And each one included a metal wheel, a clear wheel, a face, a bottom and a tool. A light launcher, a winder and a sticker completed the set. 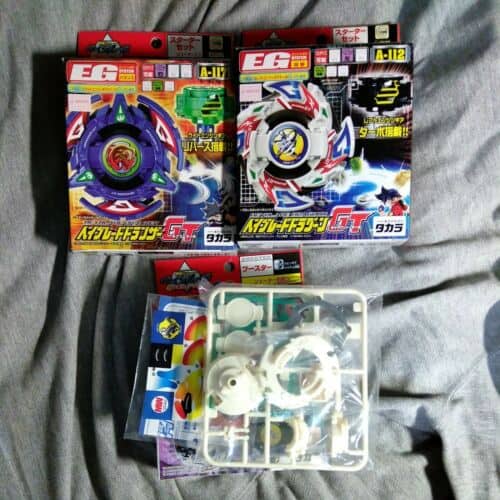 This Beyblade is associated with the character Gabriel. It was manufactured in 2002 and featured in the TV show Beyblade V-Force.

It became much fancied by collectors, and this example hit the market twenty years after it was made. It was in great condition, with the Beyblade still sealed inside its original plastic bag. It came with its box too – meaning all the components required by collectors were present and correct.

It was offered at a fixed price of $1,300 by a Japanese seller specializing in toys and hobbies. That might sound like a lot of money for a small plastic toy. But it didn’t hang around for long – it was soon bought by a collector who was happy to pay the full price. 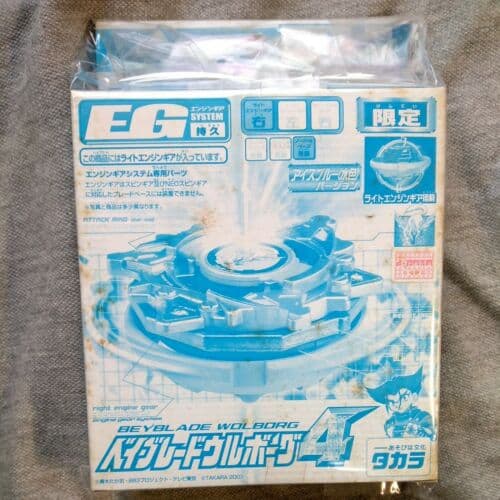 The Wolborg 4 was released as part of the G-Revolution series of Beyblades. It’s what’s known as a stamina model, designed to keep spinning for a long time. And it uses an Engine Gear System to deliver that performance.

The Wolborg 4 was one of the Beyblades belonging to the character Tala. The original version was grey with lots of other colors. But this Ice Blue version is a very rare variant – which makes it highly desirable for collectors.

This specimen came onto the market in 2022. It was in its original box, but that box had suffered damage since its manufacture in 2003. Its rarity nevertheless meant that one buyer was happy to pay $1,500 to add it to their collection. 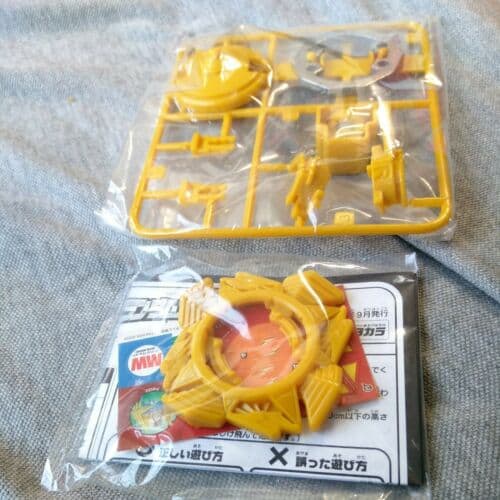 The Apollon Beyblade was part of the Random Booster 12. That was the final Random Booster to be released under the Bakuten Shoot Beyblade line. Apollon came in three different colors – Sunshine Gold, Beauty Pink and Tide Blue.

All of the Random Booster 12 Beyblades were owned by members of the BEGA League. The toys all used the Engine Gear System and were released by Takara in collaboration with Hasbro.

This Sunshine Gold version came up for sale in 2022, offered by a Japanese retailer specialising in vintage toys. It was in brand new condition, with the original box and the plastic packaging still intact. It was bought for a fixed price just shy of $2,000. 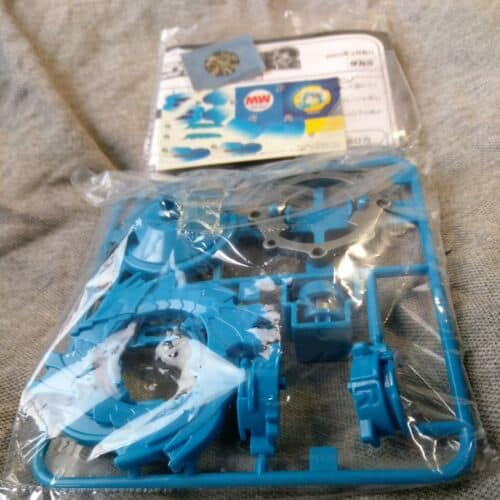 Like Apollon, Poseidon is another of the Random Booster 12 Beyblades. The Hasbro version is also known as Ocean Wrath G.

And just like Apollon, Poseidon was made in three different colors – Sunshine Gold, Beauty Pink and Tide Blue.

This example is in the Tide Blue color-way. It was offered for sale in 2022 from the same specialist Japanese retailer who sold the Sunshine Gold Apollon. It was in decent condition, but the box had been opened and the plastic packaging was sealed with tape.

But this ultra-rare model was even more desirable to collectors. It was purchased for a fixed price of $2,500.

That brings us to the end of our look at 16 of the most valuable Beyblades in the world. We hope you’ve enjoyed learning more about the toys collectors salivate over!

To the uninitiated, these small plastic spinning tops may not look like anything special. But with complex backstories and different features, there’s a world of detail for collectors to get their teeth into.

And if you’ve got a rare Beyblade yourself – take care of it! You might find it’s worth some serious money.