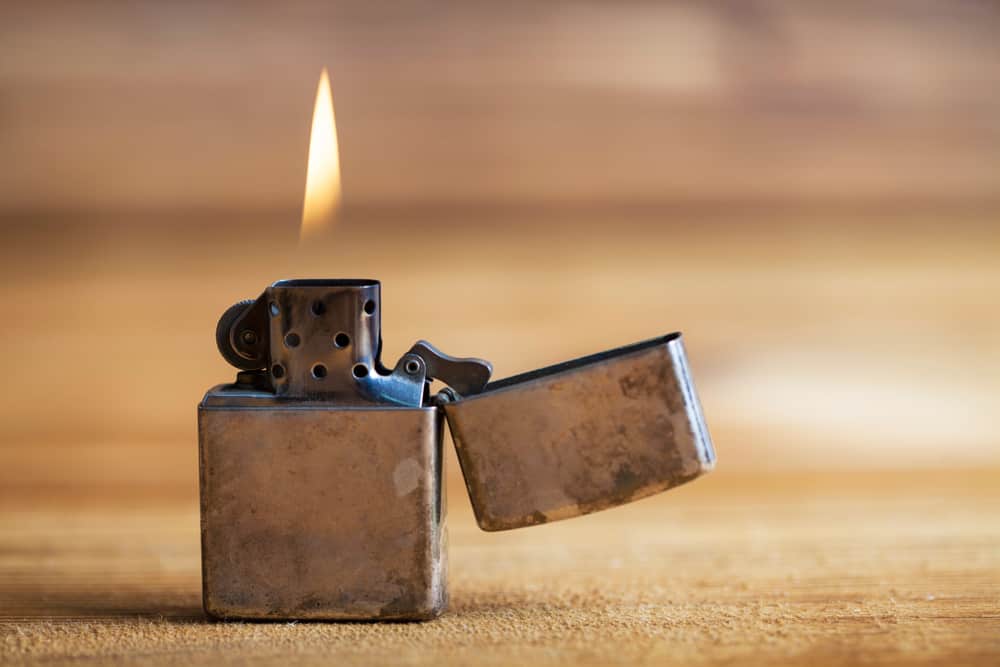 Have you ever thought about the history and value of a standard vintage tobacco lighter? Vintage lighters are not only interesting pieces of history, but they can also be an exciting find if you discover one. In this article, we will explore some of the most valuable vintage lighters, their brand names, and ask the question you’re probably wondering, “Are vintage lighters worth money?”

What is the History of Vintage Lighters?

First, let’s delve into the history of old lighters. The first lighter was invented in the 1820s by a German chemist named Johann Wolfgang Döbereiner. These cumbersome table lighters were called the Döbereiner’s Lamp. While they were certainly innovative, these lighters were unfortunately unstable and dangerous, and it wasn’t long before people began seeking a better option.

With other inventors’ inspiration lit, manufacturers began experimenting with creating all kinds of lighters, from portable lighters, to pocket-sized lighters, to those with striking mechanisms, always focusing on how they could create something safer than anything created before.

One of the first safe and reliable lighters was invented by another German chemist, named Baron Carl von Welsbach. In 1903, he invented flint, a ductile metal alloy of cerium and iron, which creates a flame when chipped away. In 1907, he introduced his invention to the market as a lighter, inspiring the modern cigarette lighters people use today.

What Are the Famous Vintage Lighter Brands?

Over time, among all the companies who manufactured lighters in the early 20th century, a few of them rose to the top and are still well known. Today, three of the most famous vintage brands are Zippo, Ronson, and Dunhill.

Vintage lighters from these manufacturers are sought after by lighter collectors.

Zippo is a vintage lighter name brand that gained a lot of popularity during World War II. In 1933, the Zippo Manufacturing Company created a metal lighter, whose design is now known as the Zippo.

A fun footnote of history is that this company’s lighters were often associated with Hollywood and show business. The Zippo lighter was one of the most popular cigarette lighter props used in movies and theatre–in over 1,000 movies, actually! They were also used as VIP gifts to be given to cast and crew members as a memento after a production.

Ronson is a brand name that was trademarked by the Art Metal Company in 1910, its name being an abbreviation of the founder Louis V. Aronson’s name.

They originally made all sorts of metal wares, and even products like children’s toys. Eventually, though, they began to produce tobacco lighters and became most famous for their sleek and innovative designs, a few of which we will explore later.

Alfred Dunhill’s company was born in 1893 when he took over his father’s saddlery shop. His company branched out into motoring accessories, since the motor car was growing in popularity. It wasn’t long before Dunhill became a success, and eventually he branched out even further, selling other products such as lighters.

Vintage lighters from Dunhill are known for their quality craftsmanship and are admired today.

What are the different types of vintage lighters?

Back in the early days of lighters, there were four main types. There was the Striker, the Manual Striker, the Semi-Automatic, and the Automatic.

Let’s learn a little about each type:

This type of vintage tobacco lighter needed to be manually operated. The early models carried a strip of ferrocerium, or flint, which creates a spark when struck.

Then it also had a wick on a steel wand submerged in fluid. In order to use the lighter, the steel wand was struck on the strip of flint, producing sparks.

Later, this was replaced with a flint wheel worked by the thumb, which shot a bunch of sparks at once in a targeted direction.

The Manual Striker was similar to the Striker, but it had a handle that needed to be pulled in order for the wheel to spin and create a spark.

The Automatic was the next step up from the Semi-Automatic. It had a valve that opened automatically when the button was pushed, making it easier to operate.

What Antique Lighters Are Collectables?

Now that we’ve looked at the history of lighters and also popular vintage lighter brands, let’s look at a few of the most famous tobacco lighters produced by these companies.

Ronson is well known because of its lighter, the Varaflame Comet.

In fact, the Varaflame Comet is enjoyed so much and works so well that it is still available today.

The Wonderliter, a little pocket lighter, was produced in 1913 by Ronson and was considered a striker. As discussed earlier, this means it had a wick on a steel wand that was fed by fuel. When the wand scraped across the flint strip, it created a spark that could produce a flame. The Wonderliter was quite a wonder for being able to work so efficiently for its time.

After World War I, the London-based Dunhill opened stores in both New York and Paris. Then in the 1920s, Dunhill invented the Unique Lighter. And what a unique lighter it was, because it was the first lighter someone could operate with only one hand!

Another popular design was Ronson’s Banjo lighter, with its unique shape. It was a sleek lighter that used Ronson’s patented automatic mechanism, which caused the lighter to be lit and extinguished with the simple push and release of a button.

Are Vintage Lighters Worth Money?

You may be wondering, what is vintage lighter collecting all about?

Like most vintage finds, lighter collecting is all about the hunt and the find. In this case, it’s about acquiring lighters that are of interest to you, whether for your personal collection or for resale. But are vintage lighters actually worth any money?

Well, the short answer is yes! Vintage lighters can be worth a lot to collectors.

The longer answer is that it depends. There are many factors that can affect the value of a vintage lighter, so they all need to be taken into consideration.

Here are a few of the features that factor into the value of an old lighter:

The first clue as to whether an old tobacco lighter is valuable is its rarity. It stands to reason that the less common a lighter is, the more valuable it will be.

Especially because old lighters before the 1950s (which would be considered vintage) are hard to find these days. Luckily for lighter collectors, any lighters produced before about the 1920s are especially more valuable because they were manufactured by mass production. This means that there were fewer of those early models in circulation.

And it’s always an exciting find when one is discovered!

So, if you just so happen to find an old lighter in the first place, that’s already a step in the right direction toward owning (or selling) a valuable piece of history.

Vintage lighters come in all shapes and sizes. Some are very sleek and modern looking, while others are quite ornate.

Skilled craftsmanship could also potentially raise the overall value of a vintage lighter. If a piece is highly detailed and perhaps handmade, for example, it will probably be quite valuable. A piece that displays a poor or plain design may not be as eye-catching or as collectable.

While the design of a lighter can play into its value, its functionality also plays a vital role. Whether they are strikers, manual strikers, semi-automatic, or automatic can affect the value of old lighters, and if you find any of these styles, they are well worth researching.

Just like with any product, the brand name can also affect the value. Some brands are much more interesting and desirable for collectors than others.

For example, we’ve discussed how lighters produced by Zippo and Ronson are quite popular. This is largely due to the high quality they produced in their time, and also because they simply didn’t make a whole lot of their early stock.

As a result, pieces from these lighter companies are worth more than other brands.

Of course, the condition of an old lighter is going to be a major consideration in its value. For example, it is important to check for any damage on an old lighter you may find, such as dents, scratches, or missing parts.

Vintage lighters that are in mint condition are definitely going to be worth a lot more than those same lighters that have been well-loved and used over the years.

Even more so, the most valuable lighters will be new old stock. This means they’ve never been operated. In fact, if they are mint in the box, they will have their original labels, instructions, and packaging.

What a find that would be!

The age and history of a tobacco lighter can make it even more valuable.

For example, vintage lighters from World War I and II are collectible because they offer a glimpse into the past and what life was like during those trying times.

Another example, as we mentioned earlier, is lighters that were used on the sets of movies or given as gifts to the cast. They often had the movie’s logo, an actor’s signature, or a friendly farewell statement etched on the side of the lighter’s metal casing–which, of course, makes it very obvious which production it was from and the history that surrounded that particular lighter.

When a lighter is produced in limited quantities, it becomes more valuable. These types of luxury lighters could have been produced for any number of reasons.

Some were made as promotional items for a specific company or product. Others, like those produced for Hollywood’s casts and crews, were given out as VIP gifts. They were even given out as prizes in competitions and as mementos for special events.

What’s more, if the design of the lighter was never used again after that initial production, it can make it even more scarce, unique, and valuable.

The type of materials used in a vintage lighter will affect the value of the piece.

For example, lighters made with solid gold or silver are definitely going to be worth a lot more than those made with cheaper metals.

Now You Know the Truth Behind the Value of Vintage Lighters

So there you have it! You now know the truth behind the value of vintage lighters, which brand names to search for, and what factors to consider.

Vintage lighters can be worth a lot of money, especially if they are rare, well-made, have a popular brand name, and/or come with an interesting history. To determine if your old tobacco lighter is worth money, it is important to consider all of these factors.

The next time you’re out antiquing or at a garage sale, keep your eyes peeled for those little treasures! And if you think you may have a valuable vintage lighter on your hands, your best bet is to research it online or take it to a reputable antique dealer or auction house for an appraisal.

With some research and luck, you never know what you might find. You may just discover a valuable collector’s item!

Have you ever found an antique lighter? Let us know in the comments below!