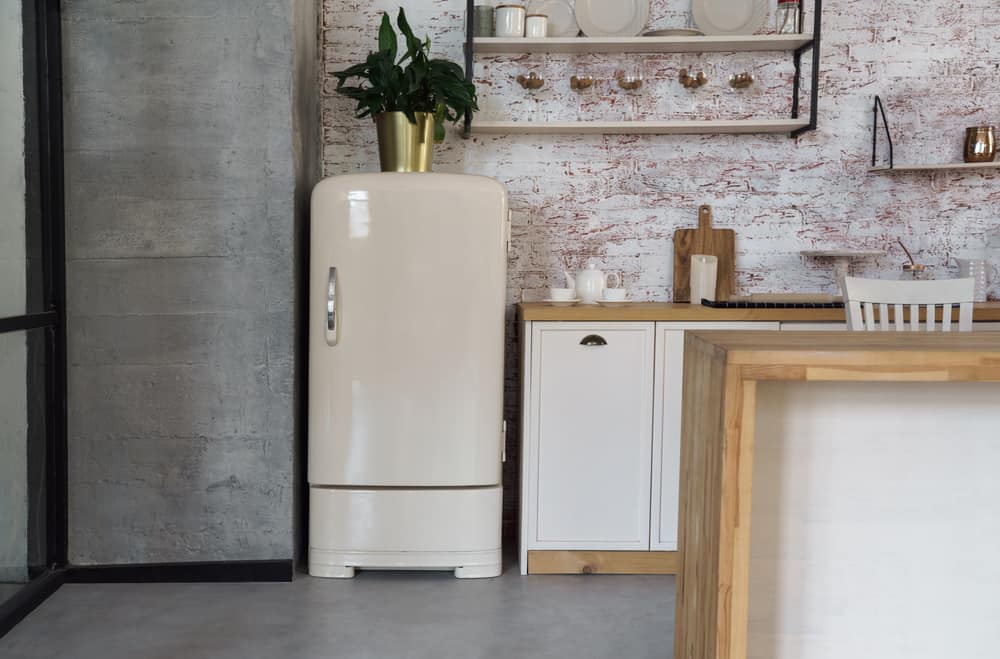 Refrigerators are now an essential part of any home, but they weren’t always. The refrigerator revolutionized our lives in a variety of ways, from how we eat to how much money we spend on eating.

Although we now have modern technology refrigerators that perform flawlessly and provide us with several advantages, vintage refrigerators are making a comeback in many houses.

The refrigerator is now valued not merely as a utilitarian appliance, but also for its aesthetic appeal. As a result, numerous brands have released refrigerator lines in recent years that emulate the design of the 1950s and 1960s.

In this article, we will answer all your questions about old refrigerators and we will give you a complete guide about their history, the most emblematic brands, and ideas of what you can do if you have one of these old but incredible appliances stored at home.

Ice houses were used to offer cold storage for much of the year before the introduction of the refrigerator.

Places have been used to keep and chill food since the Roman Empire. During the winter, the locations were frequently near freshwater lakes or snow or ice.

The term “refrigerator” was coined in the seventeenth century. In 1755, Scottish scientist William Cullen built a modest refrigerating machine, which began the history of artificial refrigeration.

Oliver Evans, an American inventor, created a closed cycle vapor compression refrigeration device for producing ice from ether under a vacuum in 1805.

In 1842, the American, John Gorrie, built a prototype intended for sale to the public, but it was a commercial failure.

Alexander Twining received a patent for an ether-based vapor compression method in 1850.

James Harrison, a British journalist who had immigrated to Australia, invented the first practical vapor compression refrigeration system, which he patented in 1856 for a vapor compression system employing ether, alcohol, or ammonia.

In 1851, he invented the mechanical ice machine, which he later adapted for commercial sale in 1854. Harrison also pioneered the use of refrigeration in food and beverage factories, with a dozen of his systems in use by 1861.

This was the start of the contemporary refrigerator, as well as the prototypes.

Many refrigerator brands are still in production today, and you’ll be able to recognize them because they create modern refrigerators, but knowing the vintage brands will help you figure out which refrigerators are valuable, classic, and sought after by collectors and restorers.

In 1926, Frigidaire was one of the first companies to produce refrigerators entirely out of steel; previously, wood and other materials were utilized. The company was later sold to General Motors.

The same business released its first Hydrator Humidity drawer in 1930, and a few years later, it pioneered the use of Freon for refrigeration.

They were also among the first to develop refrigerators with freezers, and their designs evolved to include a distinct freezer chamber.

Coldspot, which invented a fiberglass-insulated freezer design in late 1953, made another significant contribution. The Coldspot Cold Guard, a frost-free refrigerator, was produced eight years later by the same manufacturer.

Norge was another pioneer in refrigerator design, with versions that contained a freezer and others with two-door refrigeration units.

By the 1960s, most brands were emphasizing futuristic designs, with smooth curves and greater capacity. It was the decade when refrigerator technology took a great leap toward the designs we know today.

In the 1970s, companies like General Electric focused on low-consumption freezers that could meet new regulations set by governments around the world in the interest of reducing environmental and economic impact.

Refrigerators at the time required approximately 2200 kWh of electricity each year.

In the 1980s, chlorofluorocarbons were phased out of refrigerators, allowing most models to live far longer and serve a more practical rather than decorative purpose.

During the 1990s, the Energy Star system became a norm, and power consumption plummeted to as low as 850 kWh per year. The ice dispenser was also included in high-end refrigerators, and French-style door designs became fashionable.

Modern refrigerators, regardless of brand, now utilize 460 kWh or less per year and have reached a good balance of technology and design.

If you have a refrigerator buried in a dark corner of your home and want to see if it’s worth dusting out and selling, there are a few things you should do first to determine a realistic and fair price.

Take a look at the brand and model

Your old refrigerator’s original manuals and purchase receipt are probably already in the trash or some forgotten, hard-to-find place.

As a result, we recommend looking at the back of the refrigerator for the manufacturer and model. Some models have the brand name on a metal plate, usually on the front, but if you can’t locate it there, the model and manufacturer’s name will most likely be on a metal plate or sticker on the back.

It’s critical to understand the state of your refrigerator if it’s still in good condition, and how much damage it has on the inside and out. Good cosmetic condition is also important.

Check the temperature regulators and the interior lighting as well. The good shape of your refrigerator will influence the final selling price.

Examining the original price is another excellent idea. This can be difficult, but once you have its brand and model, you can use the internet to look up its original price with a little patience.

Find refrigerators that have recently been sold

Finally, seek an online auction or advertising in online antique stores like Etsy or eBay. Compare recently sold refrigerators to yours to get an idea of how much the model you want to sell or one that is similar is selling for in the current market.

This will also allow you to determine whether it is worth repairing and selling as functional hardware or simply as material to be remodeled and if there are interested buyers for it.

Collectors and restorers may be interested in your refrigerator if it is from a well-known brand and if it is in excellent condition.

We’d like to leave you with a list of different refrigerator manufacturers that have been on the market for a long time.

These companies stand out not because they are the most famous or well-known, but because they have innovated in design and now provide refrigerators with classic looks but cutting-edge technology.

They are an excellent choice if you want to acquire a vintage refrigerator while yet having all the modern conveniences.

Keep in mind that not everyone is willing to spend a significant amount of money renovating antique refrigerators. It’s also important to note that not all refrigerators can be repaired.

Aside from the exorbitant cost, in some cases it is impossible owing to the damage they have sustained over time, therefore buying these vintage refrigerators with entirely contemporary and functional systems is a perfect option.

The case of Big Chill is very curious since they designed a single vintage refrigerator for the beach house of a relative, but someone else saw the design and bought it.

This is how a specific initiative became a whole business. Their Vintage refrigerators are inspired by the 1950s, with curved corners and those classic colors of the era, like pastel mint or deep red.

It’s a great option if you want the perfect midpoint between technology and retro design.

This company has been operating since the 1970s. As its name indicates, at first they only sold stoves, but little by little they added other appliances to their catalog.

When retro fashion began to gain strength, they decided to open a whole line inspired by retro designs which they called Northstar.

This line of appliances not only features refrigerators but also microwaves, dishwashers, stoves, and range hoods, all in a retro style, but their Elmira Antique refrigerator is one of their most popular products.

Since the 1950s, this Italian enterprise has been in operation. They started off specializing in gas stoves and dishwashers, but have since expanded.

They decided to include a line of retro refrigerators in the 1990s, which proved quite successful and is now the company’s main product, and with which most people are familiar with it.

Galanz is a Chinese company that not only has retro refrigerators, but also produces blenders, toasters, and microwave ovens.

Galanz is characterized by having very cheap prices in the market and they have a great presence in online stores around the world.

Chambers started appliance production in 1910 and is the oldest company on this list. It was very successful, but after several changes and internal reorganization, it stopped producing electrical appliances for several years.

But thanks to the fact that they always made quality products and had a loyal public that demanded their products, they decided to go back to business, but this time with retro refrigerators that are a sensation in the United States and Canada.

This is a list of companies that sell modern refrigerators with a retro look; nonetheless, some people may be interested in purchasing a genuine retro refrigerator and rebuilding it completely.

This is not an easy task, and the expenditure can be substantial, but we’d like to include some pricing for refrigerators from various years, ranging from antique wooden boxes, which are highly sought after by collectors now, to the most popular models from the 1950s and 1960s.

What Is the Best Way to Restore an Antique Fridge?

Restoration of antique appliances to create a retro-style kitchen is quite popular nowadays; it is considered trendy and is a project in which many people are prepared to make a significant investment.

But, despite your initial enthusiasm for starting on a retro repair project, you should be aware that restoring a refrigerator is not only expensive but also delicate and dangerous if you do not have the proper professional assistance.

The main reason for this is that toxic gasses, including ammonia, methyl chloride, and sulfur dioxide, were utilized as refrigerants from the late 1800s until the early 1930s.

There have been fatalities as a result of methyl chloride leaking during this time, so it is not a good idea for you to start removing the parts of your refrigerator on your own.

The electrical wiring should be checked and the old insulation replaced with new materials once the refrigerator has been meticulously dismantled in all of its parts by a professional.

It’s also important to figure out whether the original cooling system can be fixed or if it needs to be replaced entirely.

All of these costs a lot of money, and you should be aware that it will be a substantial investment. We recommend that you first assess if it will be worth it.

Remember that if your budget is tight, there are multiple alternatives today that will allow you to maintain a retro-style refrigerator without having to spend a fortune on maintenance and rebuilding.

We hope that by reading this guide to retro refrigerators, you have gained a better understanding of what you can find on the market, the pricing you can offer, and where you can look for antique refrigerators to restore, as well as the difficult and meticulous work of restoring a refrigerator.

It is not a project that you should do on your own, and if you have already decided to do something similar, we recommend that you seek expert assistance to ensure that you do not encounter any problems and that your project is successful.