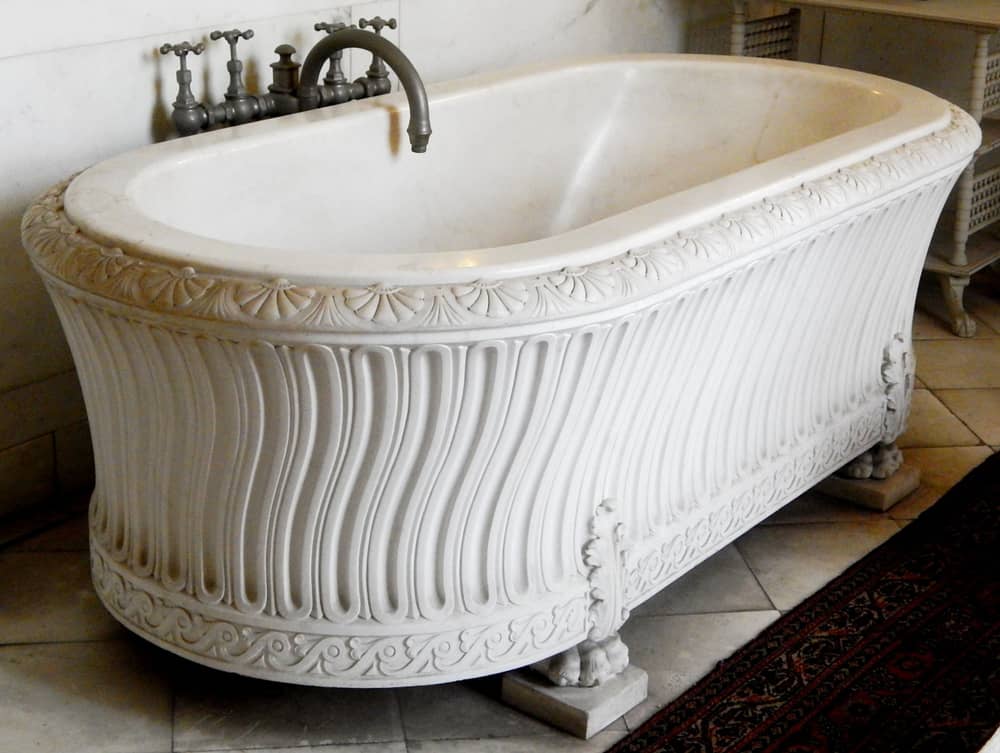 Have you recently seen an antique clawfoot tub and can’t stop picturing it in your own home? Or maybe your house was inherited by one and you’re wondering about its value.

The History of the Antique Clawfoot Tub 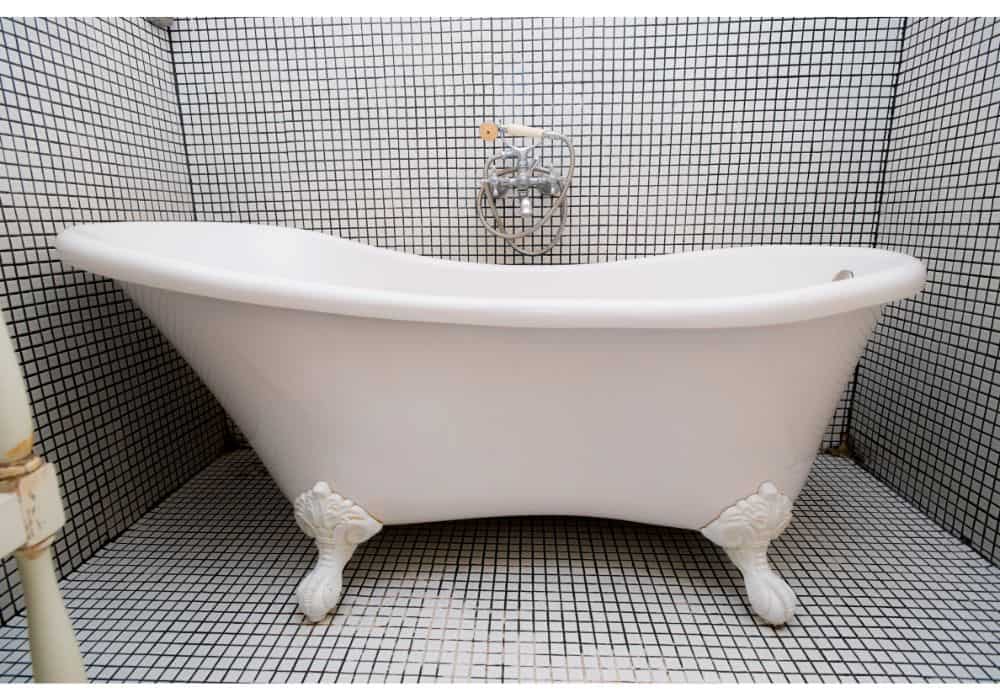 Bathing has long been a part of human history, from the ancient practices of bathing in local rivers to communal bath houses in the Roman Empire.

The original design of the clawfoot tub is tied back to Dutch designs in Holland in the 18th century. It was originally a basic tub with four crafted legs offering different designs.

During the 1700s, personal bathtubs used to be a sign of only the wealthiest European families. It was a rare sight to see a bathtub in one’s home. By the mid-1800s, however, more people had access to bathing in their homes. Clawfoot tubs began to be commonplace in the U.S. during this time.

The original antique clawfoot tub was made of cast iron – as many still are today – but it was painted on the inside surface. By the mid-1800s, David Buick came up with the process of bonding porcelain to cast iron, eliminating the constant peeling produced by the earlier painted models.

Over time, clawfoot cast iron tubs were bonded to enamel. They were also made from acrylic or fiberglass. The legs and tub rims were offered in different designs and shapes.

From the late 1800s to the 1930s, clawfoot cast iron tubs were all the rage, but by the early 1900s, built-in tubs began to dominate popular designs.

Plenty of design options came with the more affordable, post-war housing era in the U.S. Newer tubs were built with boxes around them that were tiled to match the rest of the bathroom, slowly removing most clawed tubs from everyday homes.

While the antique cast iron tub design is said to originate from Europe, most of the well-known commercial manufacturers are from the United States. These companies dominated the scene when clawfoot tubs became the “it” item of everyday American homes.

American Standard Companies, Inc. is a manufacturer of heating, ventilation, and air conditioning (HVAC) and plumbing products. It was created in 1929 as a merger between the Standard Sanitary Manufacturing Company and the American Radiator Company.

The first commercially manufactured cast iron clawfoot tub in the U.S. was made by this company in 1883. Earlier versions even had other uses, such as troughs for horses. Many American Standard clawfoot tubs may be found with the “Standard” label.

Crane Holdings is an American bathroom fixture manufacturer founded in 1855. It is best known for incorporating bright and fun colors into its fixtures.

The company itself has since grown into the aerospace equipment field, although its Crane Plumbing Unit was sold to the American Standard in 1990.

The J.L. Mott Iron Works company originated in New York in 1828. Creating everything from stoves to clawfoot tubs, this company specialized in cast-iron work and appliances.

Kohler was founded in the U.S. by an Austrian immigrant in 1873. He began producing an enamel-coated clawfoot tub around the year 1883, transforming a trough into an elegant tub with a few clawed legs.

This company continues to have global success, selling products to over 19 countries. It is also one of the few U.S. manufacturers who continue to sell the original cast iron clawfoot bathtub.

How to Date an Antique Clawfoot Tub 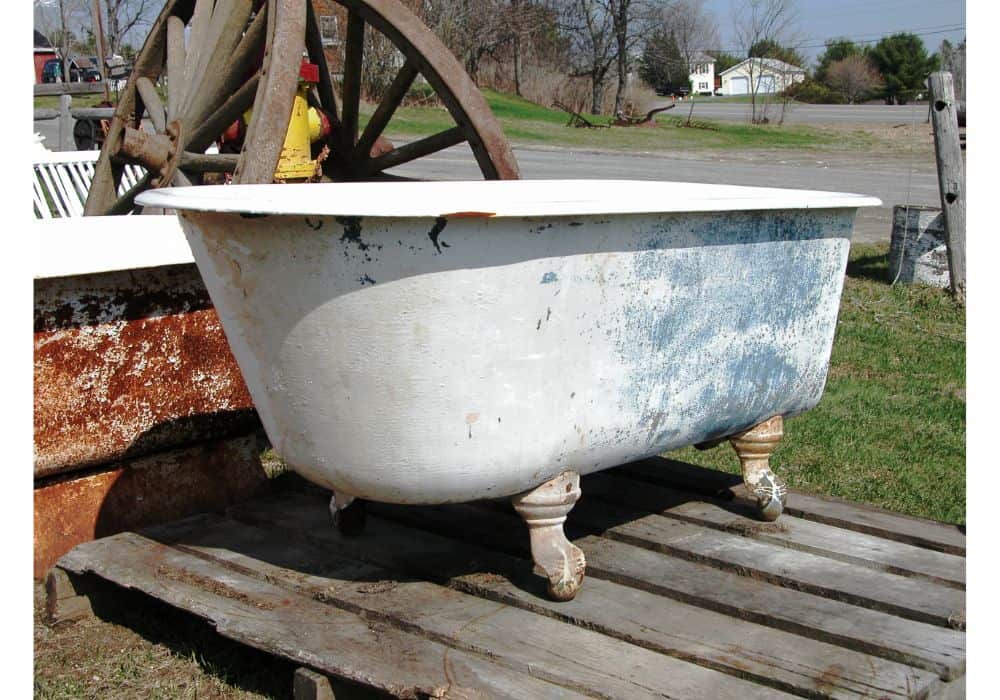 To properly date an antique clawfoot tub, you can search for its manufacturing information, consider the colors and materials, and check for wear and tear.

Finding the manufacturer’s logo could provide great insight as to when your tub was made. You can search for the logo on the underside of the tub or on or under the hardware (faucet, handles, or legs).

The logo could include the manufacturer’s name. For example, the Standard company would be identified by “SSM.” Some tubs may only have “Made in the U.S.A.” without a company name.

The stamp or logo could also include a manufacturing date in a month-year format. For example, “12 31” represents December 1931. Be sure you don’t confuse the manufacture date with the tub’s measurements, which may also be listed as a numerical series near or on the logo or stamp.

The earliest manufacturers of clawfoot tubs focused on traditional white tubs. White will age over time and may seem to have a yellow tint. Colored bathtubs became more popular from the 1930s through the 1970s.

The original antique U.S. clawed cast iron tub was made of cast iron and finished in porcelain. If you’re lucky enough to find a truly old tub, it will be made from copper and come from Europe.

Commercially produced tubs switched the porcelain out for a coat of enamel. Newer tubs were made of acrylic or fiberglass to make them lighter.

Check for Wear and Tear

If your antique tub is around a century old, it’s going to show signs of wear and tear. Small scratches or chips are normally found in antiques, but larger cracks may lower the item’s value.

Older tubs may also have been refurbished or resurfaced. Some signs of this are a painted drain or a tub that has a different color than the walls of the bathroom. 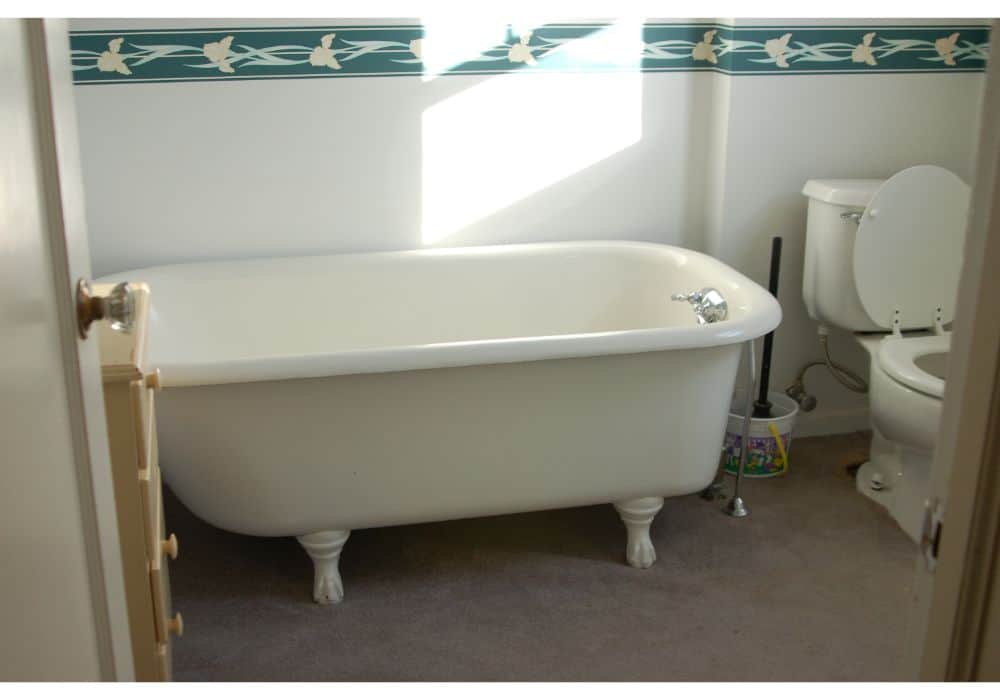 The cost of a vintage clawfoot tub can be valued based on the condition of the tub, its materials, size, and details.

Valuing Based on Condition

While any antique will have wear and tear, you’ll likely need to refurbish your tub if it’s excessively peeling or cracked. The average cost for a standard refinishing for a claw foot tub will cost around $600.

If the tub needs excessive restoration work, it will be valued lower at its sale. If you don’t want to refurbish it, though, many people still look for these tubs to upcycle as planters or for decoration.

If the tub has already been refurbished, it will be valued higher.

It’s also important to confirm that your tub has its original clawed legs. Some people have changed out or even added on legs to antique bathtubs. Unless it is an older, European tub made of copper that has had its legs added or replaced, new legs will likely lower the value of your antique.

Valuing Based on Materials

The original clawfoot tub will be made of cast iron and coated in porcelain enamel. While these tubs may not differ greatly in value from those made of newer materials, they will likely be older and cost more to transport.

If you find tubs with a peeling, internal coat of paint you may have stumbled upon truly vintage clawfoot tubs from Europe. Be sure to get a second opinion to make sure this paint wasn’t added on later on by a previous owner.

Valuing Based on Size

The standard sizes for cast iron tubs are 66 inches and 72 inches, although you can also find some tubs in a 60-inch standard size.

The length of the tub is a tricky concept for valuing an antique-clawed bathtub, as it could go either way. A larger tub will be worth more if it’s in good condition and has a nice design; however, its transportation and installation will cost more and come out of the buyer’s pocket.

A larger tub that needs refurbishing will also require more out-of-pocket expenses for the buyer. If it’s already refurbished, this could add a pretty penny to the price tag.

Valuing Based on the Detailing

If your tub has a manufacturer’s logo, it will be easier to pinpoint and value. Many early manufacturers also used one of three designs: single slipper, double slipper, and rounded rims (called flat and rolled rimmed). The single slipper has one extended end, the double has two curved ends, and the rounded tubs are 180°.

While they are a rare find, double-rounded tubs are some of the oldest designs. These may also have a raised end to support the person’s back while bathing, as opposed to having a squared end.

Some fancier tubs may also have gold or silver detailing, adding a lot of value to the tub.

How to Sell an Antique Clawfoot Tub

You can sell your antique clawfoot tub at local antique dealers or to scrap yards that need cast iron.

If your tub is in excellent condition, you can place an ad online through eBay, Etsy, Craigslist, or Facebook Marketplace. Be sure to clean your tub thoroughly and take pictures with as much natural light as possible for your online post.

Once online, give your post a few days before accepting the best offer.

Antique clawfoot tubs can make a beautiful addition to any bathroom. You can find these elegant designs for as little as a few hundred dollars, but most high-end antique tubs will run you a bit over $2,000 – especially if you need to have them refurbished.

No matter which you choose, there’s no other feeling like soaking in a beautiful antique claw foot tub. Enjoy!