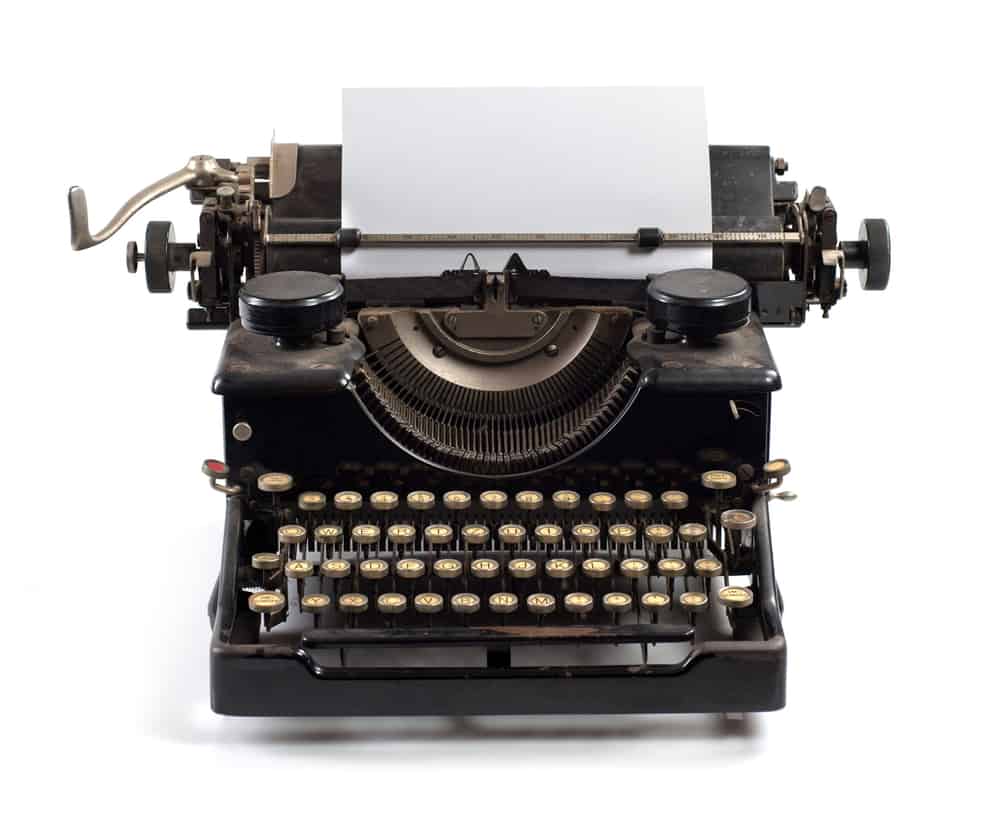 Whether you’re a writer or a collector, antique typewriters are probably some of the most desirable objects you can own. Typing on a vintage piece of machinery is something magical, but it can also serve as a beautiful decoration for your room or office.

That’s why old typewriters are extremely popular antiques, and the interest in them has never been bigger. In this article, you’ll learn everything you need to know about antique typewriters.

The history of typewriters is a fascinating tale of many attempts and failures by dozens of talented inventors. As a result, there isn’t a single first typewriter, because people can’t really agree on what constitutes a typewriter.

Some say that the first typewriter is the printing press created in the mid-1450s by Johannes Gutenberg, others that a machine called “scrittura tattile” by an Italian printmaker Francesco Rampazetto is the first typewriter, and some even say that Chinese hand-printing in 2 B.C is also typewriting.

However, the first patented typewriter was created by Henry Mill in 1714. It was called “Machine for Transcribing Letters” and led to the creation of many machines that could be compared to modern typewriters.

In the 18th century, several Italians manufactured devices for printing text, but they were specifically designed for blind people. Among those were Agostino Fantoni in 1802, Pellegrino Turri in 1808 and Pietro Conti di Cilavegna in 1823.

These machines never became mass-produced, but in 1829, American William Austin Burt created what’s called “typographer”, which is often regarded as the first typewriter because its invention was officially documented.

However, the first typewriting machine that became commercially available was created in 1865 by Rasmus Malling-Hansen, who engineered the “Hansen Writing Ball”. It became mass-produced in 1870 and was used as late as the 1910s.

The Hansen Writing Ball had only upper-case letters and the typist couldn’t see the paper as he typed. Not too long after it, Americans caught up with Europeans, and designed the first typewriter that was advertised as such.

It was created in 1868 by a group of inventors including Christopher L. Sholes, and Carlos Glidden. It was called the “Sholes and Glidden Type-Writer” and licensed to E. Remington and Sons company, which were manufacturing sewing machines.

Most other typewriters that were created afterward improved on the design by Sholes and Glidden, making the machines more durable, less likely to jam, and easier to use.

But there were other types of typewriters created, like the index typewriter, which utilized a stylus and an index of letters, instead of a keyboard. They were significantly slower than their counterparts but considerably cheaper to produce and lighter.

Index typewriters worked by choosing a letter from an index using a stylus or a pointer, kinda similar to modern tablets. Such typewriters first appeared in the 1880s, but never overtook traditional keyboard-based machines.

Now that you know the history of antique typewriters, we can start learning how to correctly identify one and see when and by whom it was made.

How to Identify an Antique Typewriter

The earliest antique typewriters are pretty easy to identify just from their shape alone. They featured bizarre designs that went obsolete in just a few decades. However, newer models could be more problematic, but they can still be identified by brand and serial number.

Most typewriters have embossed manufacturer’s number, usually on the front of the frame. Finding serial numbers can be a little more tricky because they can be located anywhere on the typewriter.

Try lifting the ribbons and looking beneath. The serial number might also be located behind the carriage, so move it left or right to see what’s behind. Also, it could be embossed at the sides of the frame or even at the bottom.

You’ll find everything about your antique, including the age of manufacturing, pictures, and other valuable information.

Antique typewriters vary drastically in price, depending on several factors. Because of that, it’s difficult to assess the value of a vintage typewriter. The same two models can sell for completely different prices. However, here are the main factors determining the value:

As with all antiques, the older, the more valuable. Some of the most expensive typewriters are those made in the 19th century because they are the rarest.

Those made in the second half of the 20th century usually don’t fetch high prices because they can be found in most thrift stores. Finally, the ones made during WWI (1914-1918) or WWII (1939-1945) are extremely valuable, because of their historic significance, and because most of them were destroyed during the wars.

Another rule of thumb – the better the condition, the higher the price of an antique. Typewriters that are in mint (perfect) condition are always the most valuable ones. Even a single scratch can make the price nosedive to the bottom.

However, slightly damaged typewriters that are rare can still sell for a lot of money, but the step from mint to excellent condition is proportionally the most devaluing.

Today typewriter fonts are standardized, but back in the day, there was much more choice. Antique typewriters with rare typefaces tend to be more expensive.

Some of the rarest fonts include gothic-style “Fraktur”, Jazz Age “Vogue”, and various cursive fonts.

Working typewriters cost more, simple as that. Even if the rarest machines are purchased for decoration or collecting purposes, the fact that it’s in working order still increases their price.

It’s also possible to repair and renovate antique typewriters, so the price correlates with functionality level, instead of simply being “working” and “not working”.

Typewriters that were manufactured in Europe are usually more valuable than those made in the US. It’s because they were aimed at richer consumers and feature more intricate designs.

Despite many factors influencing the typewriter’s value, some brands are known to be more expensive than others. In the following sections, we’re going to review general price ranges by brand and show some of the most expensive models of every popular antique typewriter manufacturer:

Adler was the biggest typewriter manufacturer in Germany and continued the business in West Germany after World War II. The average price of most post-war era Adler models is around $50, but you can find some even cheaper than that. This company was founded in 1903 and offered small, portable typewriters that quickly became popular all over the country. As a result, there are many antique typewriters by Corona that have survived to this day. 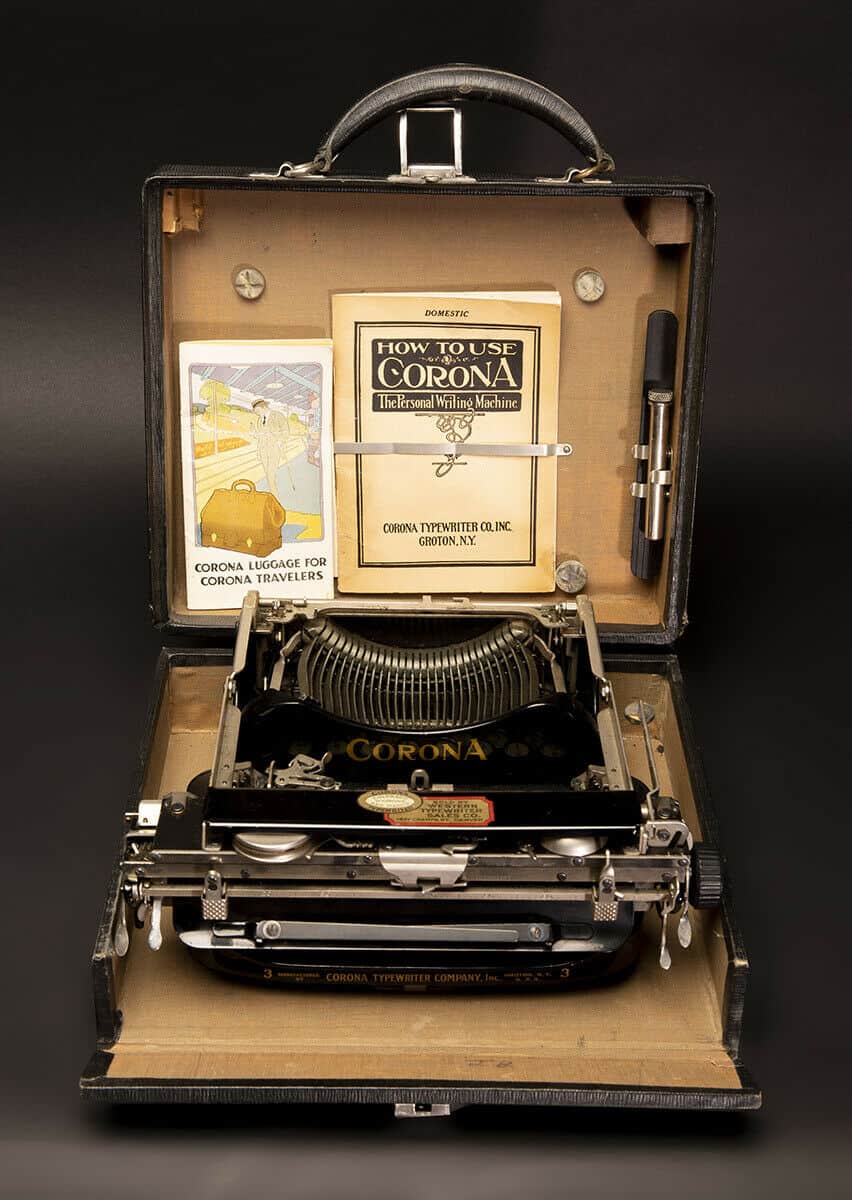 This company in Chicago, Illinois was the first to develop “frontstrikers”, typewriters that apply ink from above the paper, instead of from the below. However, the first machines from Oliver were “downstrikers” (applying ink from below the paper). 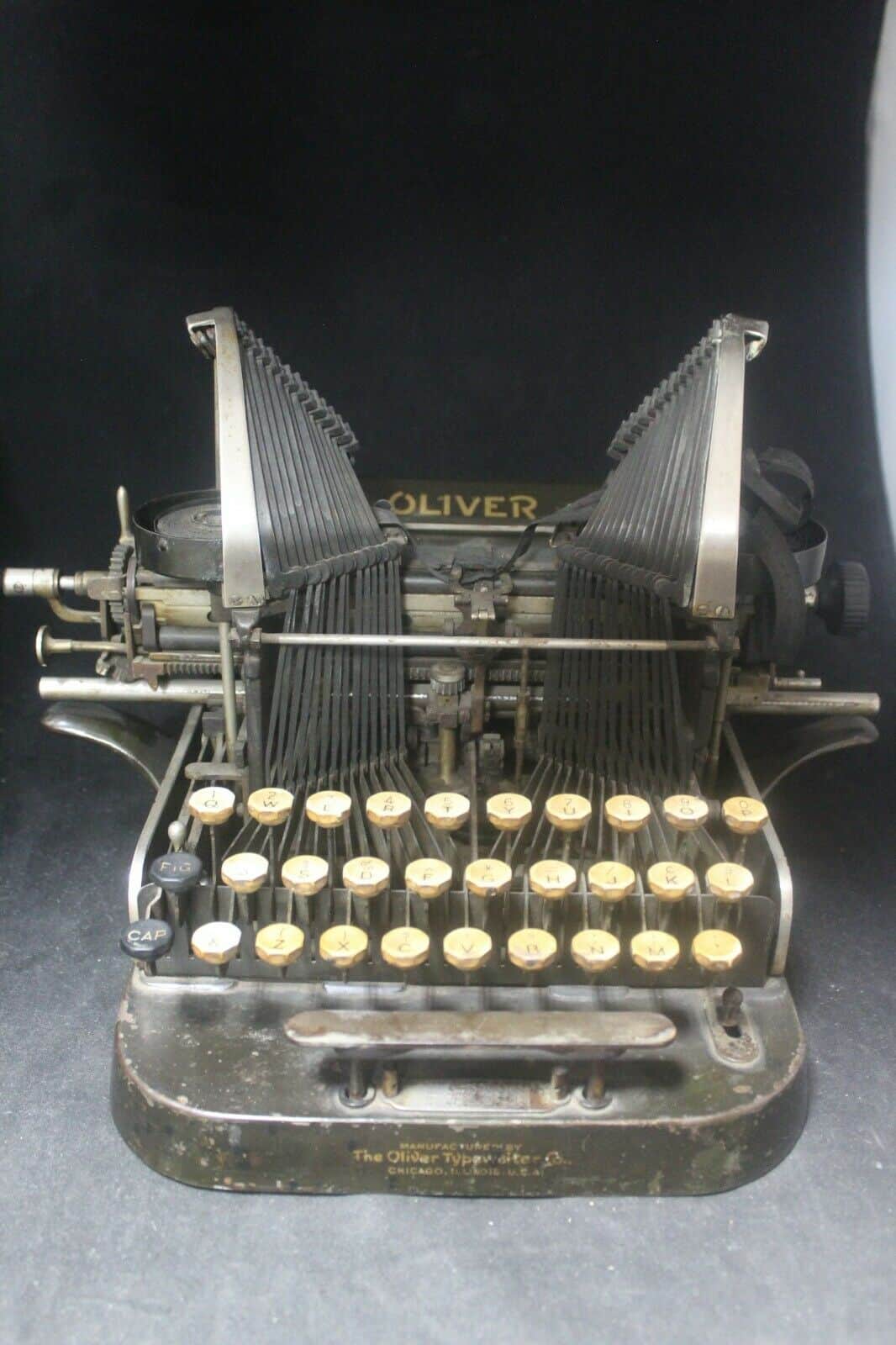 Those are the most expensive models, but most Oliver typewriters cost around $150. However, the rarest models can cost up to $500, and one Oliver No. 2 from 1898 is currently being sold for $899.50 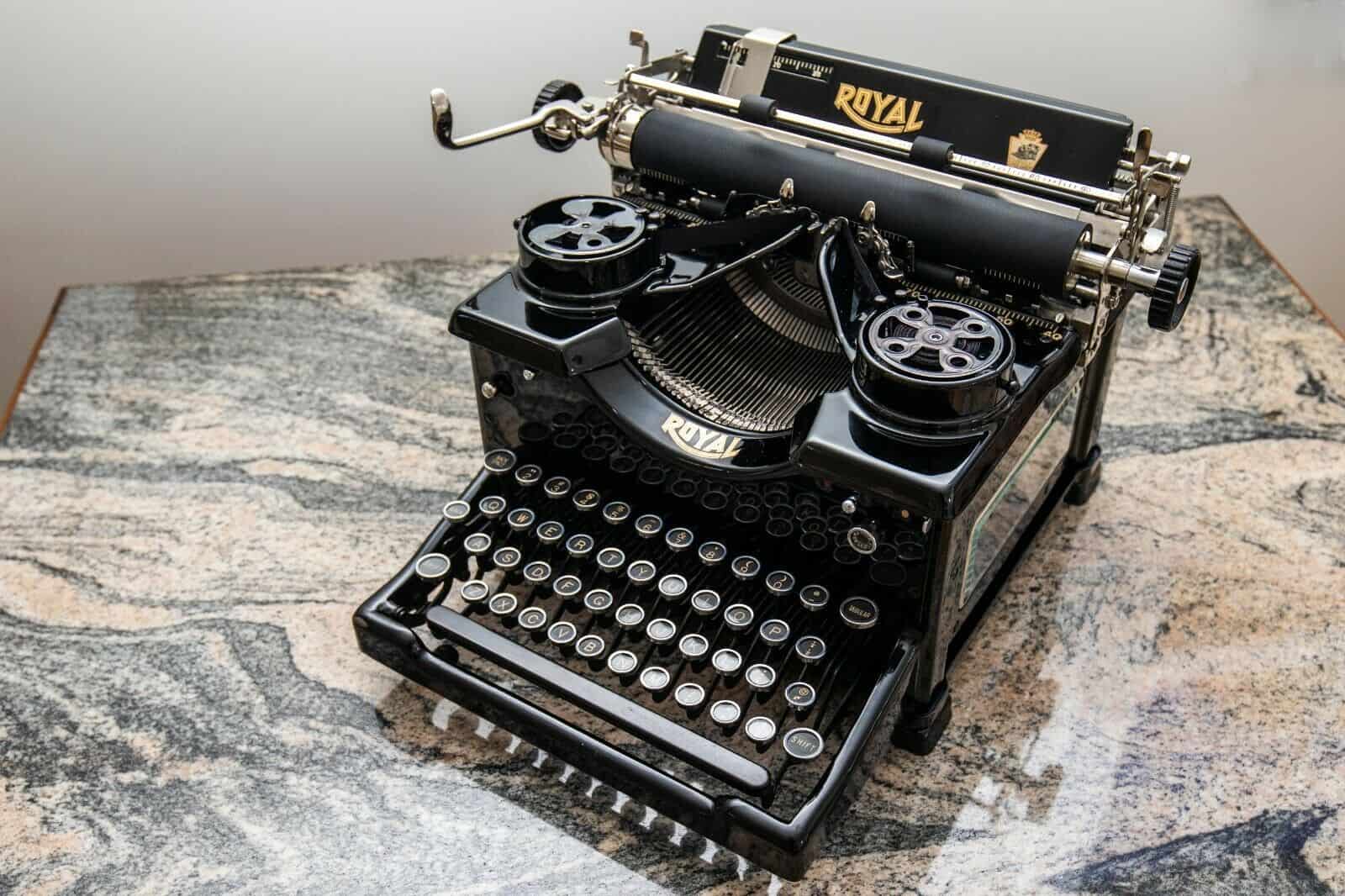 This company is responsible for creating the first “visible” typewriter, where you could see what they’re typing as they type. It was Remington Standard 10, which today costs around $250, but one renovated model from 1932 is being sold for $2,100.

However, most other Remington models are valued at around $150.

This business was founded in 1903 and sold affordable, durable, and efficient typewriters that were loved by writers and journalists, who had to type a lot of words every day. As a result, there are many Royal typewriters that have survived to this day. 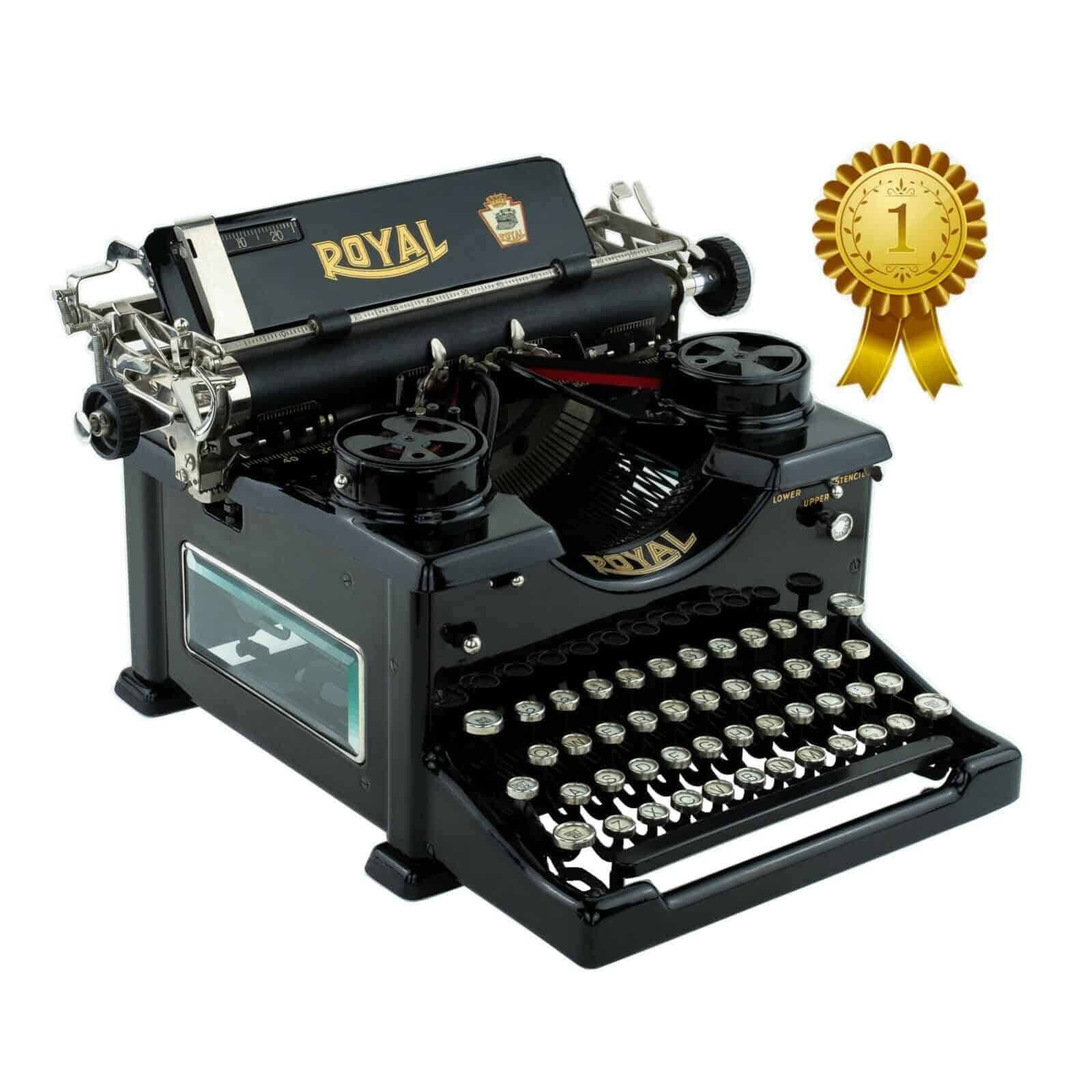 L.C. Smith was known for producing the most ordinary typewriters. They are extremely common and it’s rare for them to sell for more than $100, but the rarest models average about $300 in price. 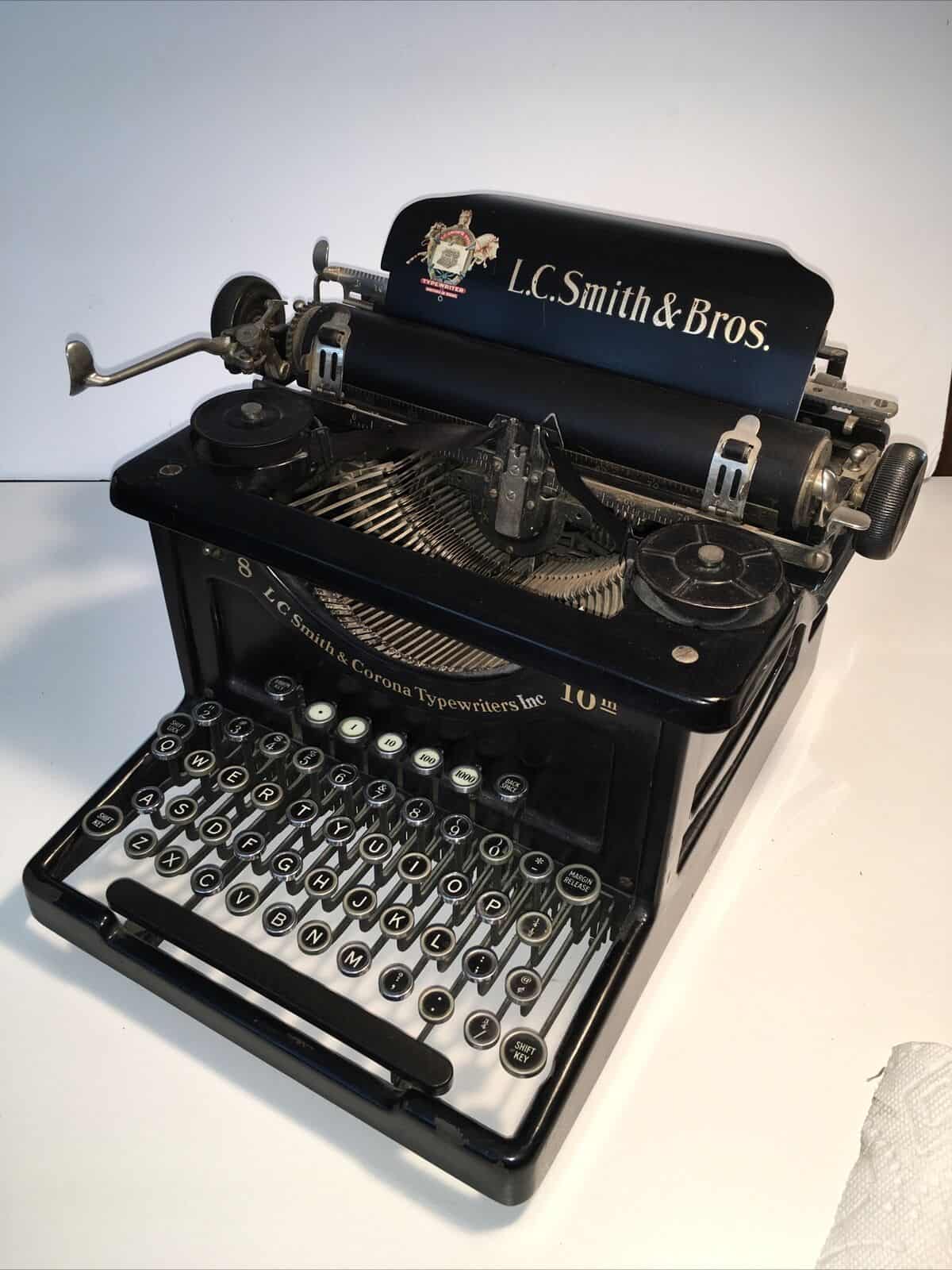 Probably the most known German typewriter manufacturer. It produced many models of typewriters, which today are valued differently. For example, some basic models have an average price of $100, but others are more valuable. 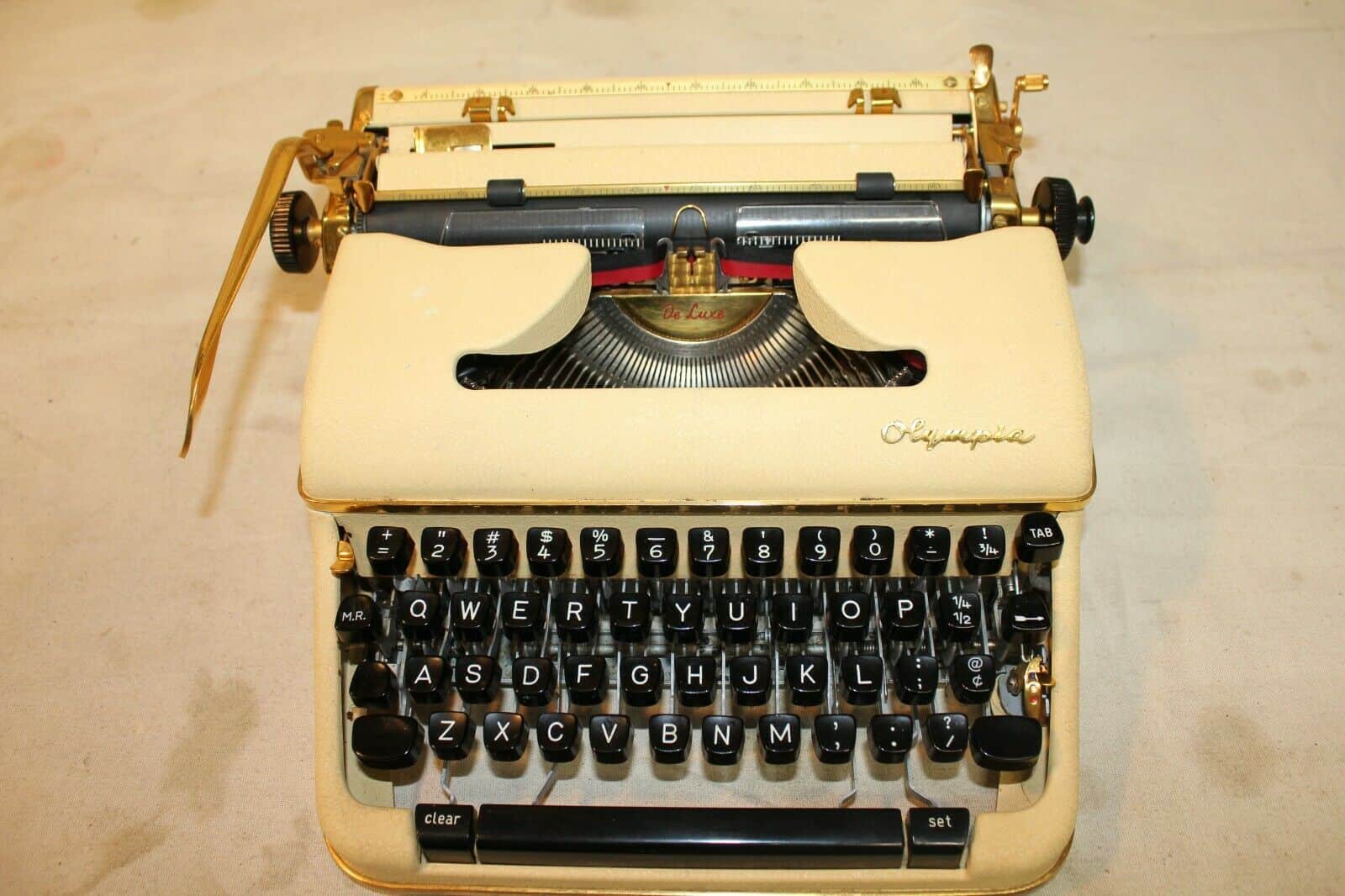 The average price of the Olympia SM9 is about $600, but some rare models can cost much more than that, like Olympia SM4. One such 24K gold plated typewriter was sold for $2,100.

SG1 models are also some of the most expensive Olympia typewriters, like this one which is listed for $1,495. 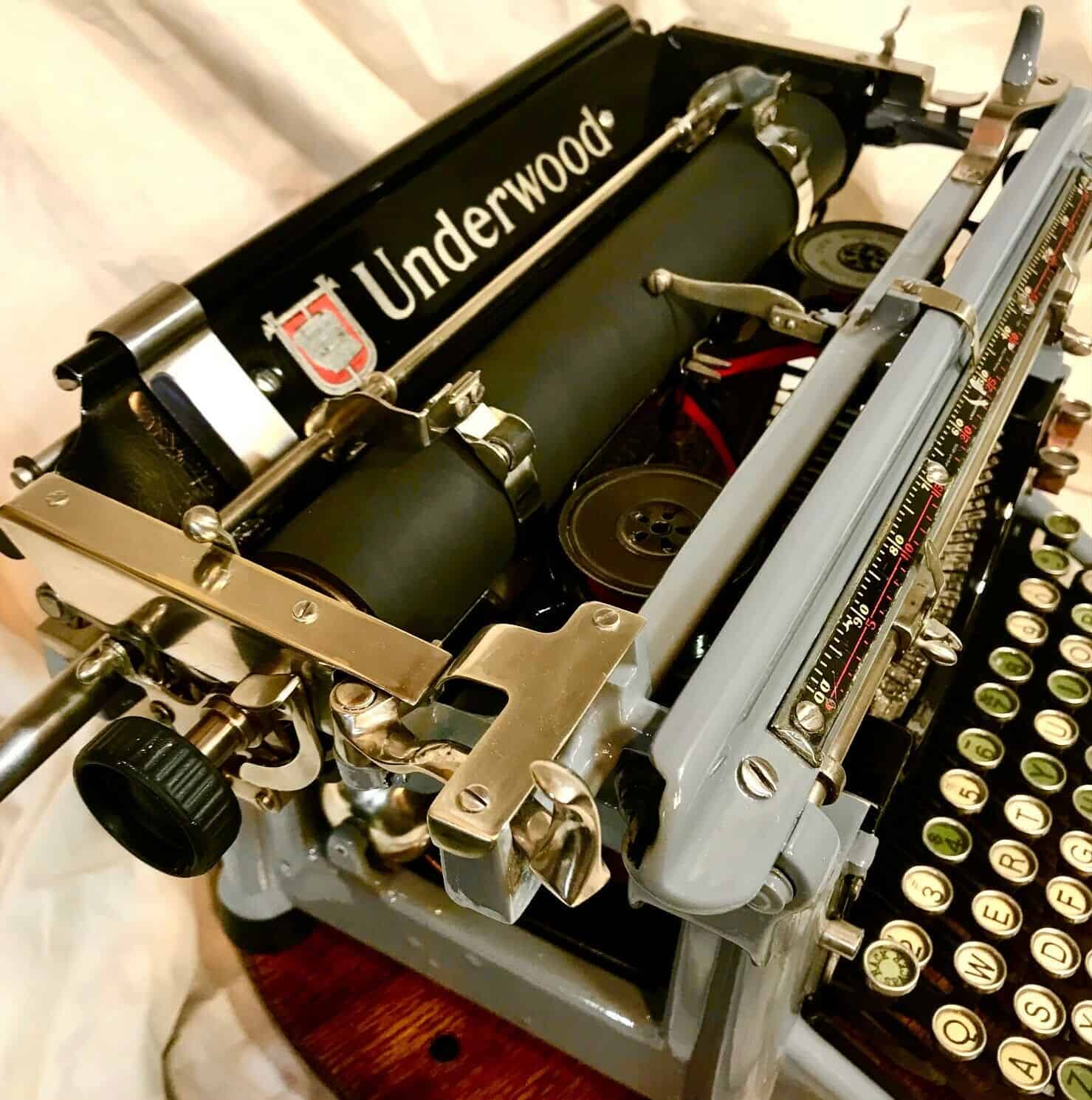 One of the most popular models, Underwood No. 5 from the late 1920s usually sells for about $300, but earlier models are much more valuable, like this renovated Underwood No.3 made in 1916, which is listed for $3,400.

This company was known for affordable and durable typewriters, so collectors today aren’t too keen on having one in their collection. Most models can be bought for as little as $50, but rarer ones can be valued at $200 and up. 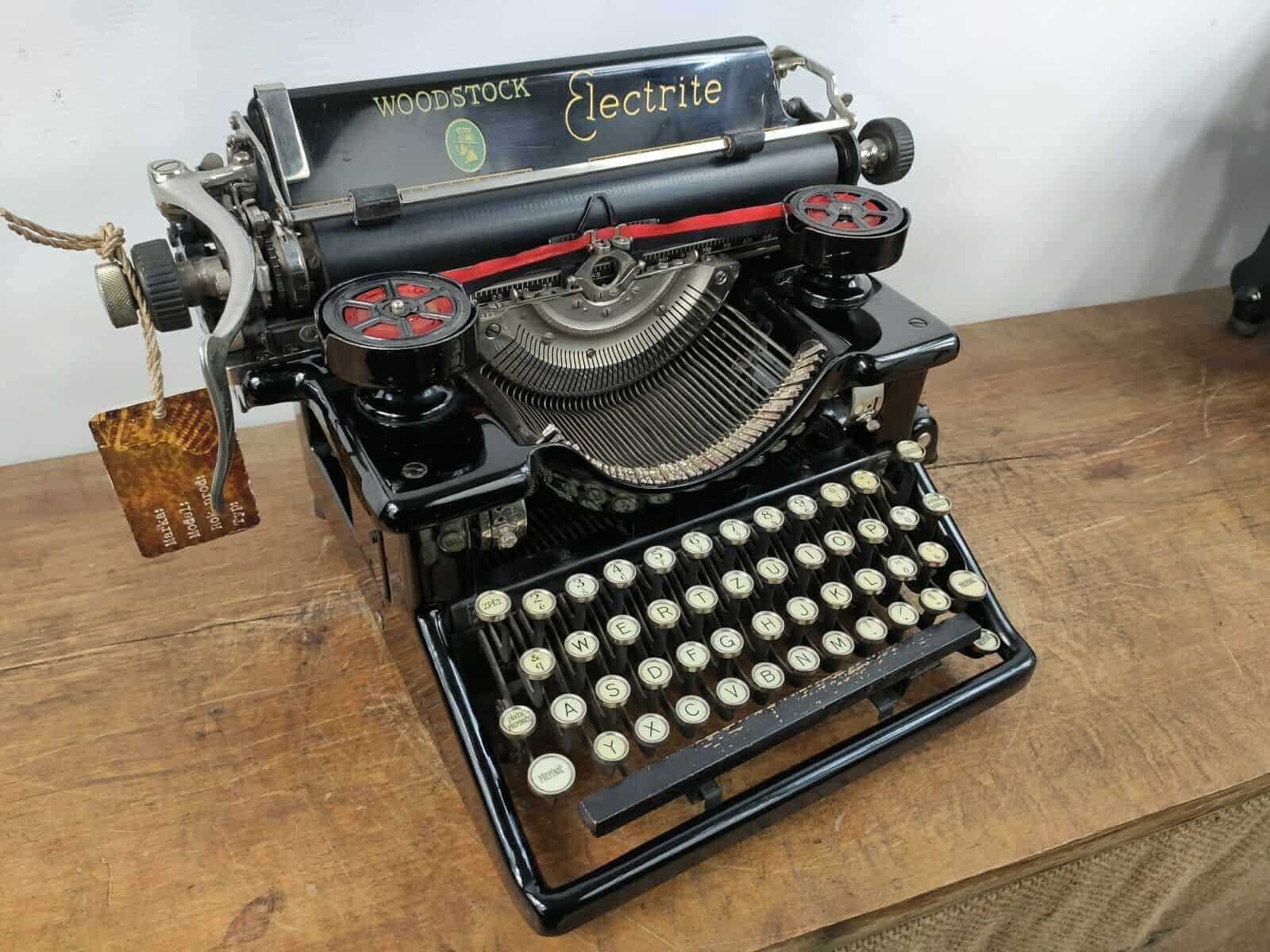 For example, one Woodstock Electrite typewriter is being sold for $699.

There are many more brands of typewriters, some of which have produced models that have sold for much more than the ones we’ve just mentioned. For example, The Writing Ball by Rasmus Malling-Hansen has sold for over $140,000.

However, it’s unlikely that you own one of the rarest typewriters. Additionally, their prices vary so much that listing their value isn’t useful, and they have to be evaluated on case to case basis.

Where to Sell and Buy Antique Typewriter？

If you’re interested in selling an antique typewriter or buying one for yourself, there are several places online that include thousands of listings with typewriters ranging from the most common ones to extremely rare and valuable ones.

Here are some of the best online websites for selling or buying antique typewriters:

Currently, there are over 600 listings related to antique typewriters on the U.S website alone. eBay also has 5 international websites with different listings, so regardless of where you live, you can find a typewriter to buy or people that are willing to buy it from you.

Etsy is another great option if you want to buy or sell an antique typewriter online. Buyers from all around the world are visiting this webpage daily, and currently, there are over 3,500 listings for antique typewriters.