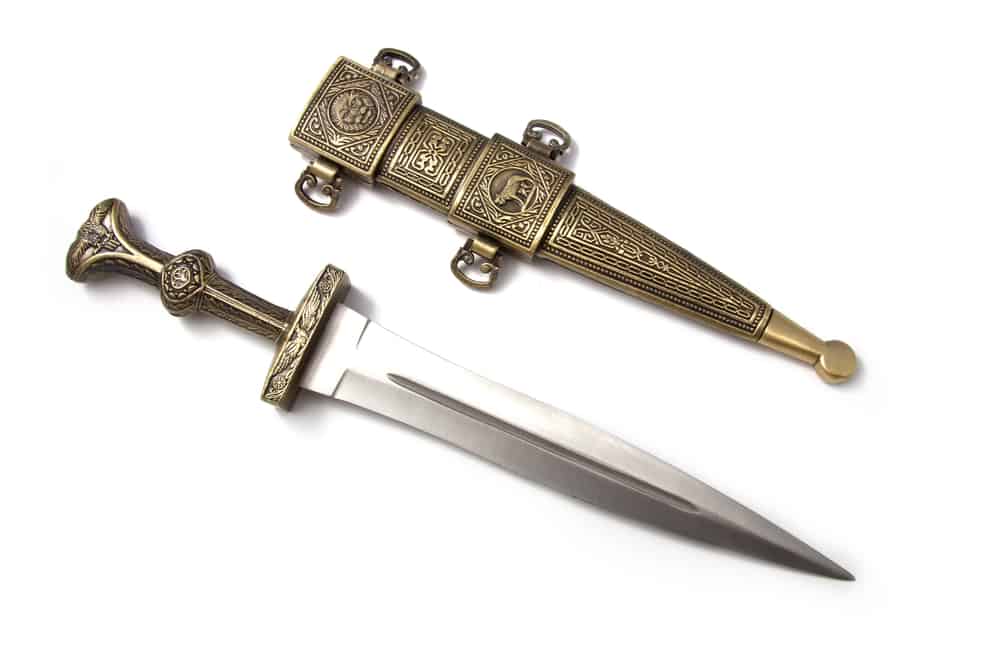 Are you looking to collect swords? They have always been popular collectables. Not only do they look great displayed in a cabinet or on your wall, but they are also a great investment.

Investing your money on the correct swords can be better than putting money in the bank, since the value of some swords can grow up to 20% each year. There are no bank accounts that give that sort of return for your money.

But before you invest in swords, you need to build your knowledge about antique swords. In this article, we have collected together information about types of antique swords, how to identify antique swords, their value and the best places to buy and sell.

Types of antique swords and how to identify them

When getting into sword collecting, it is important to know about blades, where they originated from and their purpose. Some swords have distinguishing marks, such as a signature or hallmarks that help to identify who made them and when. As a rule of thumb, the same process can be used to classify swords from all over the world.

Anyone serious about collecting antique swords should familiarize themselves with the work of Ewart Oakeshott, a renowned Medieval sword historian. He has written books about sword typology which are used as a guide by most sword appraisers.

Below, we have listed the types of antique swords most popular with today’s collectors. We have also included key features that will help you identify the different swords such as length, weight, type of blade and when they were made.

Originally intended for foot artillery regiments, they were later also issued to sergeants and musicians from infantry regiments. They were used by the United States army between 1832 and 1872.

The 1832-foot artillery swords are 25 inches long and weigh around 2 pounds. They have a straight, double-edged blade and brass-mounted leather scabbards.

This is a general term for a military sword used for cutting off limbs or heads and slicing. Used from the 17th to the 19th century, the broadswords had a double-edged blade. They are between 30 and 45 inches long and weigh three to five pounds.

The saber was the traditional weapon of the cavalry during the civil war, however, it was still used in the First and Second World Wards. It was designed to be used while on horseback and had a curved, single-edged blade.

The length and weight vary, but for example, the 1840 cavalry saber was 2.5 pounds and 44 inches with a blade length of 35 inches. The saber was swung in heavy slashing blows.

There were many styles, but the average length was 28-32 inches and weight 1-2 pounds. Cutlass was ideal for fighting in confined areas such as on board a ship, which is why the navy favored them.

Falchion was a sword used by the knights during the crusades from the 13th to the 15th century. It has a short, heavy single-edged blade, and it is 37 to 40 inches long and weighs about 1 to 2 pounds. It was mainly used by European knights.

The Greatsword was a cutter and a thruster. A longer and heavier sword, it was 50-72 inches long and weighed 6 to 10 pounds. It was a two-handed sword. The length of the handle was 18 to 21 inches. These swords were used in the 16th and 17th centuries.

Infantry officers carried swords until WW1. Since then, these swords have been used mainly in ceremonies rather than for close contact fighting.

Wilkinson Sword, a premier British sword maker, produced a standard infantry officer’s sword 32.5 inches long and weighing 1 pound 12-13 ounces. Wilkinson had serial numbers on the blades and from the number it is possible to discover the original owner’s name.

These are samurai swords made in 800 AD and are very sought after. They have a curved blade about three to four feet long and weigh between two and three pounds. The hilt size of these swords ranged from eight to twelve inches.

The blade of the Katana is said to be the sharpest of all blades. The blades were made from hundreds of thin layers of the purest steel, and no imperfections were allowed.

This sword is also known as a bastard sword or hand and a half sword. It was used in close contact battles to thrust and cut the opponent during the 15th and 16 centuries. These swords were produced in Germany and Switzerland. They were 44 to 50 inches long and weighed 5 to 8 pounds with a double-edged blade.

The rapier or the gentleman’s sword was used to fence and duel. In the military, it signified rank. It was first used in the 16th century and in the 19th century it was often used as a walking sword by gentlemen.

These swords are lightweight, just over 2 pounds, and have long thin double-edged blades with thick cross-sections. The recommended length is that the cross of the sword should be level with the navel when the point is resting on the ground.

This video of the unboxing of nine antique swords is super informative. If you want to test yourself, you can watch it without the sound first to see if you can identify the swords from the descriptions above. But do also watch with the sound on as it will help to learn sword vocabulary.

How much are antique swords worth?

This is the big question. And the answer is from a mere $100 to a whopping $6.5 million. Imagine finding an antique sword worth millions in your attic? But why such a massive price range? A sword’s value depends on various factors.

Even if your sword is old but it is in a bad condition, it will not be worth what it should be. Things you need to look out for include: visible damages, imperfections that cannot be repaired, and damage to the blade. If there are minor chips or damages to the body of the sword, these are acceptable, as they are an indicator of the sword’s past use.

The general rule, like with most antique items, is that the older the sword, the more expensive it is. Appraisers will use different factors to determine the age of an antique sword such as markings by the manufacturers, the style and the design.

Tracing the origin of an antique sword will help to identify the type and date, which will give you an idea of its rarity. Professional appraisers use the structure to determine the origin since structural peculiarities can indicate when it was made, by who and who it was made for.

Swords that were made in their thousands and swords that are abundant on the market have the least value. For example, old European swords are rarer because they were usually destroyed or thrown into the sea when their owner died. This has increased their value.

Who a sword belonged to can make a huge difference in price. Of course, there needs to be a genuine, verified record to prove the authenticity of the sword. But when all is authentic, these swords can fetch millions, such as an original sword used by Napoleon, which sold for $6.4 at an auction in France in 2007.

We already mentioned the sword used by Napoleon, but there is one sword that has sold for more. It is an 18th-century Boateng Saber, which sold for $7.7 million. Made during the Qianlong rule between 1736 and 1795, the sword has a jade handle and a blade decorated with inlaid gold, silver, and copper.

If you would like to see four more examples of the most expensive swords ever sold, visit Money Inc. Meanwhile, let’s have a look at some other examples.

Early 19C US American Ketland Eagle Infantry Officer’s Sword – for sale by UK-based dealers of antique swords for £700. It has a 31 ¾ blade and most likely belonged to a fallen American officer.

How to buy and sell antique swords?

There is a big online market for antique swords, with many swords on sale on eBay and through online dealers such as the UK-based dealers mentioned above. When buying online, especially on sites such as eBay, check you are buying from a reputable and verified seller since there are fake swords on the market.

Outside the internet, you can find swords at auctions. However, if you are on a hunt for a bargain that could prove to be a treasure, it is worth checking yard and estate sales and flea markets. You never know what you might find!

Now you are armed with the knowledge of types of swords, how to identify them and what affects the value of the sword, you can start buying and selling swords, or building a collection.

For final tips for beginners and advice on budget, take a look at the Warwick & Warwick website. Use the comments section if you have questions about antique swords and how to buy and sell them.