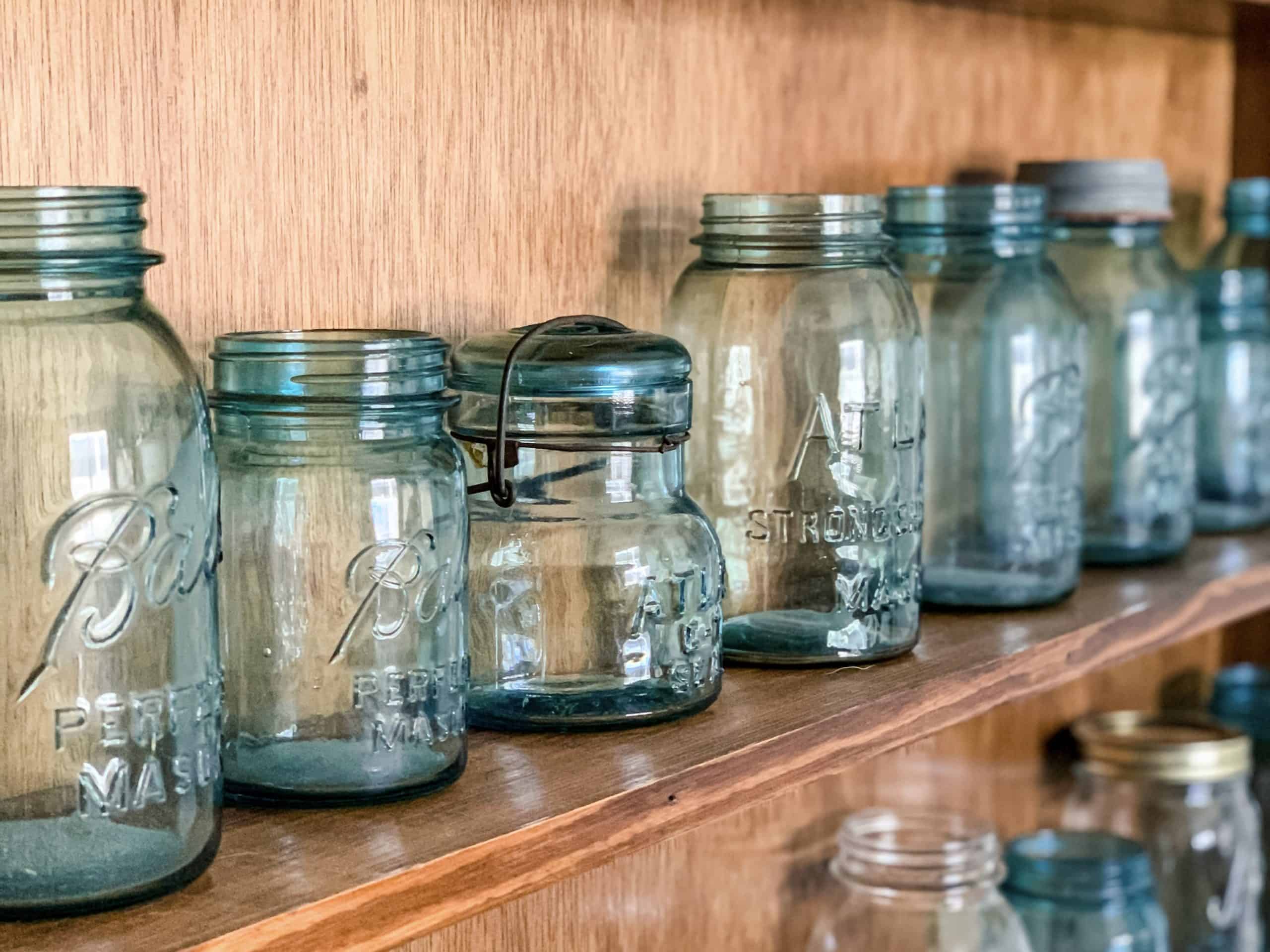 A Mason jar revolutionized food preservation and made it possible to easily keep food edible for years on end. It was patented in 1858 by John Landis Mason and soon after exploded in popularity and many companies began producing their own Mason jars.

In the 2010s, Mason jars became somewhat of a trend, and people started using them for other things besides canning, primarily involving interior design. You could see Mason jars used as pots for displaying flowers, or even as drinking vessels.

Even more recently, in 2020, there were shortages of Mason jars caused by the Covid-19 pandemic which pushed people to can and preserve food.

What is an Atlas Mason Jar?

You can buy Mason jars in nearly every store just for a couple of bucks, but some people want more than mere functionality. Some people enjoy the feeling of owning a piece of history by possessing a rare item that not many people own.

Such people buy antique Mason jars that can be as old as 100 years old. Arguably the most sought-after antique Mason jar brand is Atlas. Despite the fact that it produced millions of jars, they are still considered collector’s items.

Some rare Atlas Mason jars can cost you up to $500, while more common jars can cost as little as $10. To understand why people would pay such sums of money for simple Mason jars, let’s briefly go back in time and get to know the legendary company between Atlas jars.

Atlas Mason jars were made by the Hazel-Atlas Glass Company, which was a result of 4 companies merging into one. This company quickly rose to power and produced canning containers, milk jars, and bottles.

It was acquired by the Continental Can Company in 1956 when the Hezel-Atlas Company was the third-largest glass container producer in the U.S. However, just 8 years later, in 1964, it sold 10 of its 12 glass manufacturing plants and went out of business.

Since then, many Mason jars embossed with “Hazel-Atlas” were produced, but they aren’t considered originals and don’t have much value.

Now we can right dive into Atlas Mason jars, and tell you everything about these fascinating jars.

There are several main types of models, each having several variations differing by volume, and some by color and even embossment. Alice Creswick in her book “The Fruit Jar Works” described 73 variations of Hazel-Atlas Mason jars.

Here are some of the most popular models:

Two decades after merging, the Hazel-Atlas company began producing square-shaped Mason jars with thread lids. They had an embossment of “ATLAS” at the top, “HA” logo in the middle, and “MASON” at the bottom. This model came in 4 different sizes:

This model includes some of the most valuable Atlas Mason jars because they were one of the first jars manufactured by this company.

They are characterized by a round shape and wire-bail glass lids. The default model is embossed with “ATLAS E-Z”, but there are many variations with different embossments, like:

The last variation refers to the fact that was designed to store hot foods, and you could close the lid as quickly as lightning. This model came in 4 sizes:

This model features a cylindrical shape and a tall shoulder that was marketed as “strong” hence the name. It features a threaded lid and originally came with zinc caps. It’s embossed with “ATLAS STRONG SHOULDER MASON”.

You can find this model in the following sizes:

This model features the E-Z seal with a wire-bail glass lid, but unlike EZ/Lightning models, it has a square shape and is marked with a four-leaved clover logo between the words “ATLAS” and “GOOD LUCK”. It also came in 4 sizes:

This model also features the “E-Z” seal and it’s easy to recognize because it’s marked with “ATLAS” horizontally and “WHOLEFRUIT” diagonally. It comes in just 3 sizes:

Unlike the Atlas Square Mason Jar model, this one has just one size (¾ pint) and originally came with Atlas Seal-All #63 arc-lids and bands. It’s marked with “ATLAS” at the top, “JUNIOR” in the middle, and “MASON” at the bottom.

This type of seal design has survived to this day and is arguably the most widespread method for food preservation in jars.

The final model has a square shape and is embedded with “ATLAS” at the top, “SPECIAL” in the middle, and “MASON” at the bottom. Unlike the usual square model, this one comes in just 3 sizes:

This jar model is similar to the Atlas E-Z Seal model because it also has a round shape and features a wire-bail glass lid.

There are two embossment variations of this jar model. One had Hazel-Atlas (HA) logo between “HAZEL” and “PRESERVE”, and another had the same logo on the base of the jar.

Hazel-Atlas briefly produced Simplex Mason jars that had a unique narrowing shape and were closed with threaded glass lids. It has an embossment of a slightly arching “SIMPLEX” above “MASON”.

If your Hazel-Atlas Mason jar doesn’t match up with any of these models, don’t suspect that it’s counterfeit just yet. We will cover some more jar models with other inscriptions down the line, but now let’s take a look at how you can see if your Atlas Mason jar is authentic.

How to Identify a Real Atlas Mason Jar？

These days it’s getting easier and easier for counterfeiters to produce fakes that resemble authentic collector’s items, including Atlas Mason jars. However, most counterfeit jars lack some of the finer details, or their features don’t match up with authentic models.

Here are some general tips for identifying a real Atlas Mason jar:

Look For the “HA” Logo at the Bottom

All Mason jars produced by Hazel-Atlas company have the “HA” logo embossed at the bottom. Keep in mind that both letters are always capitalized, and “H” is always above the “A”.

Most Atlas Mason jars come in 4 standard sizes (half-pint, pint, quart, and half-gallon), but there are some exceptions to this rule. That’s why you should first try to identify what kind of model the jar is supposed to be.

Then, refer to our Atlas Mason jar model list above to see in what sizes your jar model was produced. Finally, check if its size matches up with any of the standard sizes.

Most Hazel-Atlas Mason jars were made in just a few color variations, including colorless, aqua, and apple green. However, there are some rarer types of Atlas jars that are purple or amber.

That being said, you should be careful if the Atlas jar you’re thinking of buying is of vibrant color because it could signal that it’s fake. Always do your research and look for other listings on different websites to see if more people are selling a jar of such a color.

How can you tell how old an Atlas Mason jar is?

Age is one of the most important factors impacting the price of an Atlas Mason jar. The older the jar, the more likely it’s going to be expensive. However, it’s not that easy to tell how old a specific jar is, but there are several characteristics and indicators that can help you to do it successfully:

Know the Model and Note the Name

You can see what kind of inscription is on a jar and figure out what kind of model it is. It’s known when the majority of the models were manufactured, so it can help you find out how old an Atlas Mason jar is.

However, a couple of models (e.g., EZ/Lightning seal) were produced for most of Hazel-Atlas company’s existence, so knowing the model is not enough. Luckily, this model varied throughout the years by embossed name:

Finally, there are a couple of authentic Atlas Mason jar styles that were first made by Atlas Glass Co. before it merged with Hazel Glass and Metals Co. They were produced somewhere between the late 1890s and 1910s:

Up until 1915 Hazel-Atlas produced jars that were hand-finished using a specialized tool. Because of that, jars made this way has no mold seams. On the other hand, mason jars produced after 1915 were fully machine-made, and have pronounced seams on the sides.

If your mason jar has seams, it should be pretty easy to spot, and it means that your jar is not one of the oldest ones. However, some well-used Atlas Mason jars could have worn away seams, so it can be deceiving.

Survey the Texture of the Jar

In a similar vein, the texture of the jar also varies by the production method and can indicate when it was made. The surface of older jars is always more rugged and wavy, and you can actually feel it by running your fingers on it.

In addition to that, small bubbles trapped inside the glass can also mean that it’s an older jar. Contrarily, a smooth surface without bubbles indicates that it’s a newer jar.

Finally, closely inspecting the jar’s condition can help you tell how old it is. Old jars are more likely to be scratched, cracked, and slightly tinted, especially if they were heavily used.

Oder jars are more likely to have been used than newer jars because back in the early 1900s no one imagined that a simple glass jar could become a valuable and sought-after item, and didn’t bother properly taking care of them and preserving its condition.

On the other hand, newer jars are more likely to be in pristine condition without any visible defects, simply because they had less time to be used and show signs of wear and tear.

However, it’s important to understand that these are just general guidelines, and you can’t always successfully date an Atlas Mason jar. If you think that you own a really rare and old Atlas Mason jar, it’s always best to find local experts that can help you date it correctly.

Are Atlas Mason jars worth anything?

Most antique Atlas Mason jars fall in the $10-$20 range, depending on the model, color, size, and condition of the jar. However, some are more expensive, and we decided to check several online websites to find what are the prices of the more popular models.

However, some individual jars could be worth much more. For example, one Atlas Mason’s Patent Nov. 30th 1858 half-gallon jar sold for $478 on March 3, 2022. It’s nearly 15 times more expensive than an average jar of this model because of its rare olive green color.