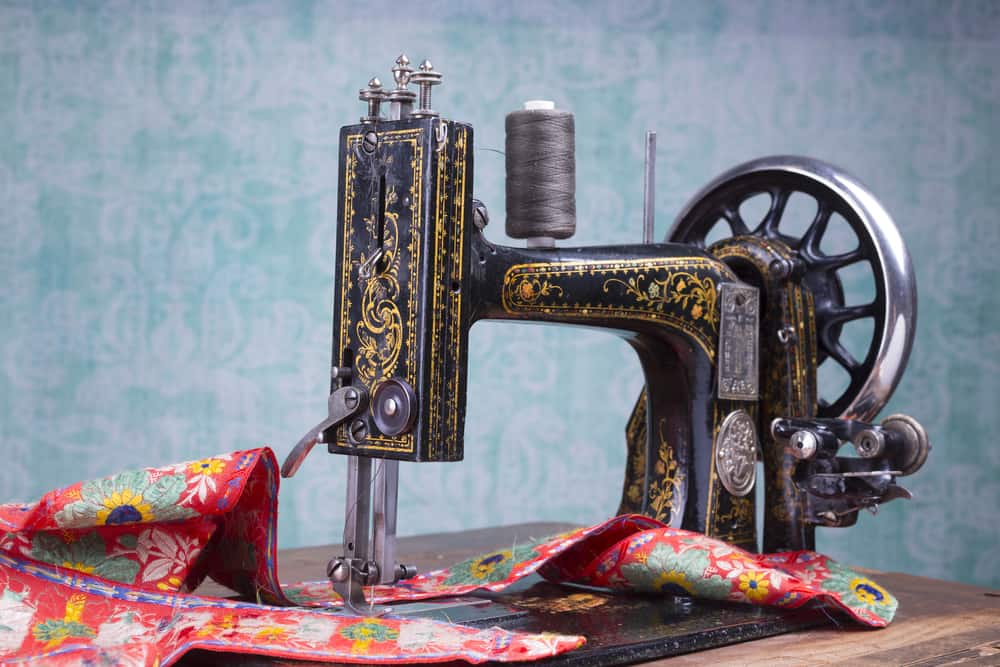 Are you a fan of fabrics, sewing, or stitching? If you’re curious about the treadle sewing machine, you’ve come to the right place.

The treadle sewing machine is one of the earliest versions of the sewing machine. It incorporates a pedal that you push on with your feet, powering the machine and leaving your hands free to work on your sewing.

Coming from the mid to late 19th century, treadle sewing machines are still used today as both collector antique items and – yes – even to sew! Let’s learn more about:

What Is a Treadle Sewing Machine? 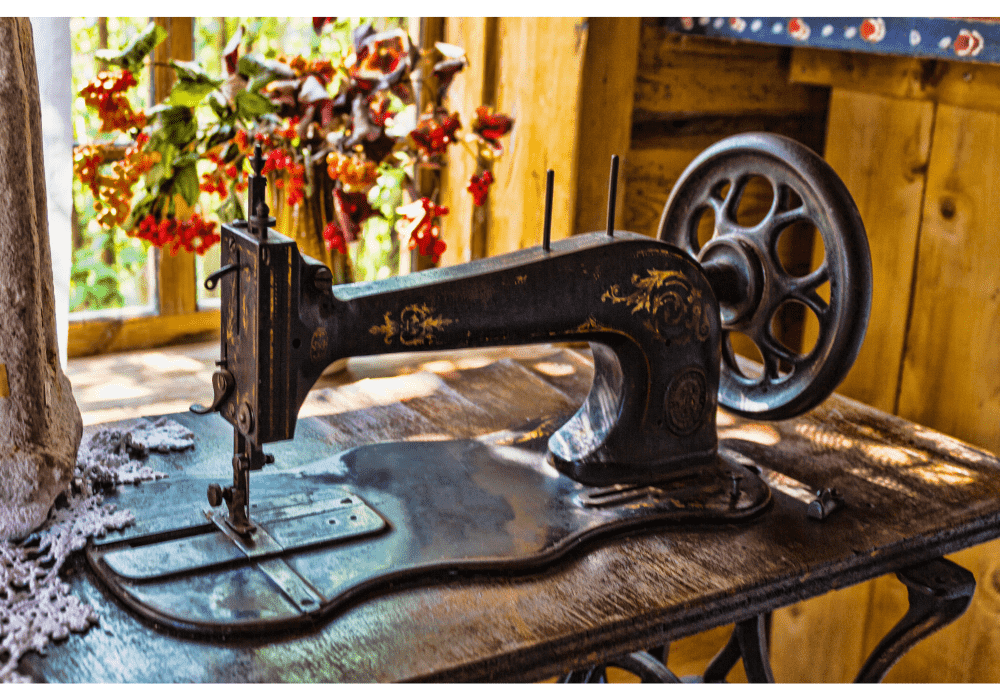 In 1830, Barthelemy Thimonnier invented a simple version of a treadle sewing machine in France. His machine was used to create army uniforms for the French, but his factory was soon destroyed by jealous tailors in the area.

A more advanced treadle sewing machine was patented in the U.S. by Isaac Merritt Singer in 1850. It was built on earlier sewing machines and patent ideas but incorporated a foot pedal, AKA treadle. This made it much easier to power the machine while keeping your hands free to work with the fabric.

The creation of the treadle sewing machine allowed for better manufacturing. Sweatshops were created to produce more clothing and fabrics, faster.

Over the years, Singer combined forces with other large sewing machine manufacturers to create updated designs. Many American homes possessed a treadle sewing machine, making sewing a popular pastime and common household activity that lasted into the 20th century.

The treadle on the sewing machine acts as a level. You push it with your feet, initiating the level that spins a flywheel. This is connected to a smaller wheel by a leather belt, which turns the machine and allows you to sew at the speed of your choice.

You can use the hand wheel to start sewing in motion or to move it up or down. If you want to stop the treadle needle in place, you can use your feet as a brake.

The belt will be tense while sewing, so many people opt to release the tension when they’re done to maintain the machine.

What Are the Advantages of a Treadle Sewing Machine? 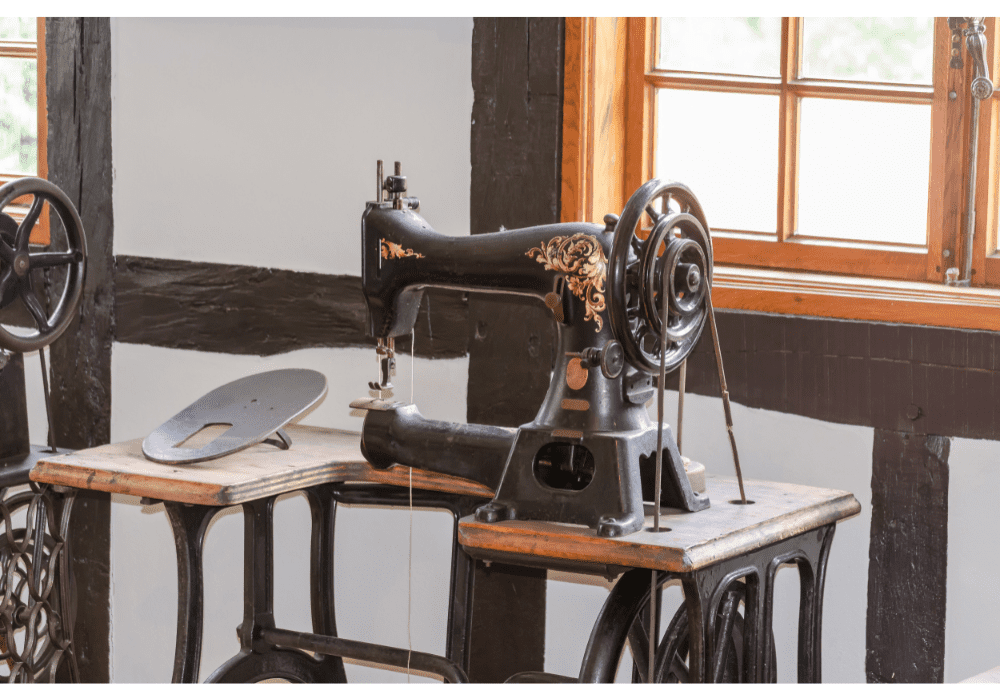 The biggest plus of a treadle sewing machine was that it eliminated the need for a hand-crank, freeing your hands to work with the cloth as your feet focus on the power.

Newer versions also included a footboard and counterweight, allowing the footrest to come down with a slight touch instead of the need for firm pressure.

When comparing a treadle sewing machine to an electric modern machine, you may notice these advantages:

Treadle sewing machines are extremely quiet, allowing for a calm work environment. You can have music or your favorite show on in the background or simply listen to your sewing at work and focus on your project in peace.

Since it’s powered by your feet and the treadle, this sewing machine doesn’t need electricity. You can place it virtually anywhere inside or outside of your home and sew where you prefer. There’s no need to look for an outlet, buy an extension cord, or worry about electrical issues.

Since your foot is powering the machine, you also have direct and easy control over the speed. You can adjust it as you go, allowing for greater focus and precision.

These machines can be kept and used with ease over decades. They are low maintenance and don’t require any worry over computer chips, electrical issues, or wiring malfunctions.

While it won’t make you sweat, moving a treadle is more exercise than working with an electrical sewing machine. You’ll be partially active while enjoying a relaxing hobby, all at once.

As with many antique pieces, treadle sewing machines were built to last. You can find some that are over 100 years old, in prime condition, and ready to sew. 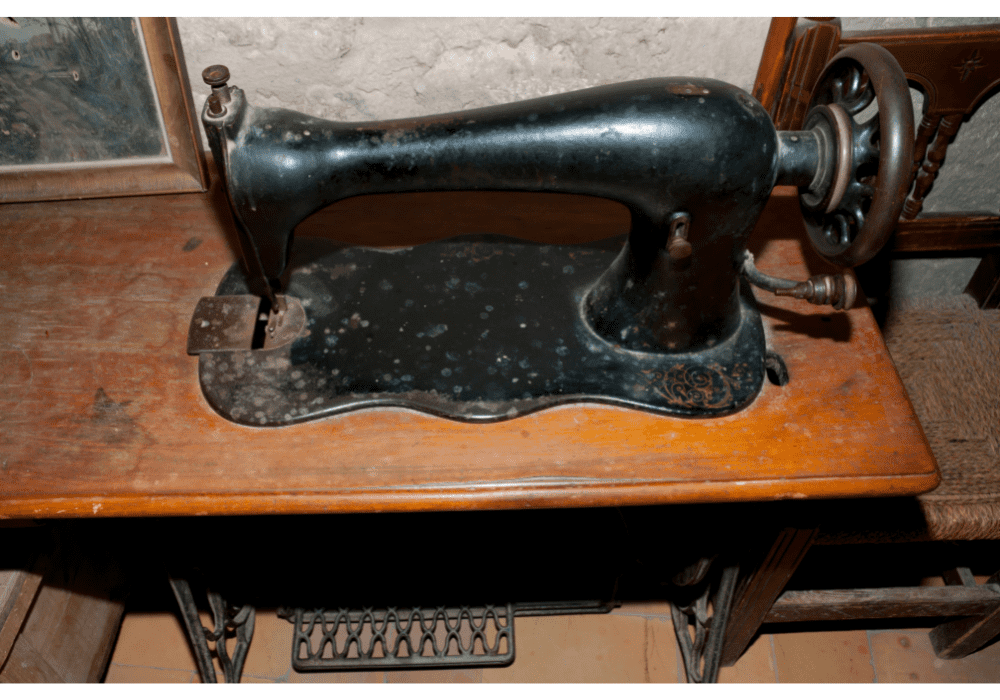 The competition was fierce when it came to the initial treadle sewing machines. Many manufacturers were taken to court for stealing ideas from patented machines.

At the end of the day, manufacturing companies combined, dissipated, and changed over the years, but the treadle sewing machine continued to improve.

A few years before Singer’s model hit the shelves, Elias Howe refined the ideas of patented sewing machines abroad. He secured a patent in the U.S. for a lockstitch design sewing machine.

Howe had difficulty finding investors for his design and, a few years later, found out that Isaac Singer had made minor changes to it and was selling his own treadle Singer.

Howe was able to take Singer to court, winning the dispute and royalties from the Singer Company.

The Singer’s name became the leading treadle brand through Isaac Singer’s company, Singer Manufacturing Co. He grew his company into an international entity, winning first prize at the Paris World Fair in 1855.

By the late 1800s, the company was able to show the first useable electric sewing machine at an exhibition in Philadelphia.

In 1963, the company was renamed the Singer Company. The Singer brand continues to create new sewing machines today under the company SVP Worldwide.

While Singer dominated the American sewing machine world for decades, other companies also made an appearance by selling treadle sewing machines.

After the 1950s, sewing machines from Asia became all the rage in the U.S. This opened the doors to other international manufacturers who pushed the Singer Company out of their monopoly.

While we can find many of these machines today, they aren’t as valued as their older, American-made counterparts.

How to Date a Treadle Sewing Machine 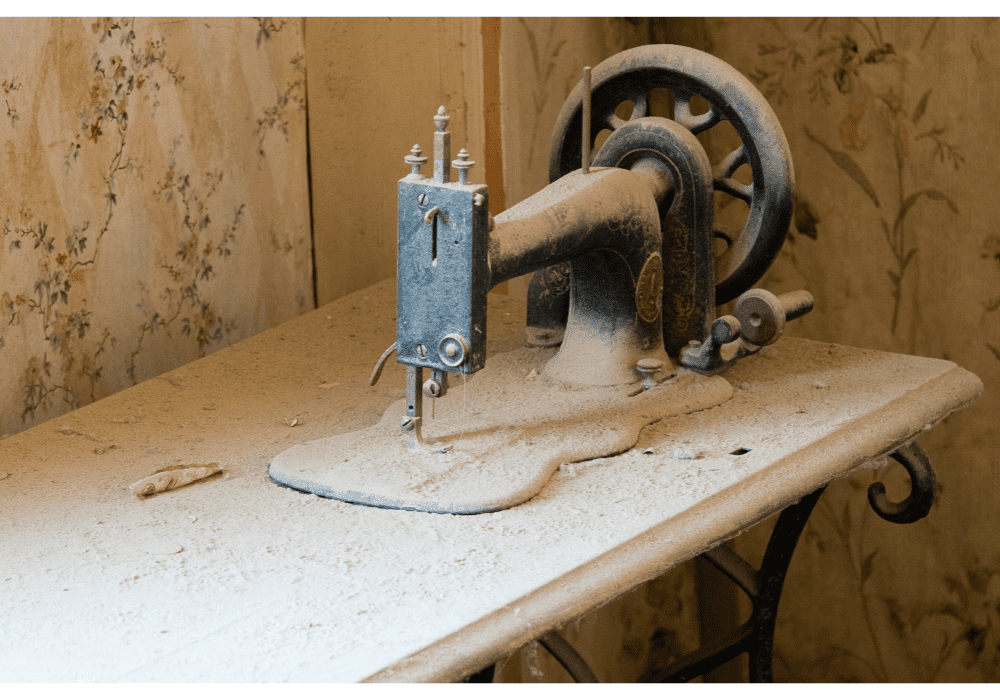 You can date a treadle sewing machine by pinpointing its brand, using its warranty card or serial number, observing the design, or going to an appraiser.

Most treadle sewing machines will have a brand name or logo somewhere on the machine. You can search for big brand names, such as Singer, Davis, Wheeler & Wilson, or Grover & Baker.

Manuals weren’t needed for the simple treadle designs of back in the day, but some companies, like the Singer Company, provided warranty cards. These cards kept meticulous data on all of their machines.

This information included each machine’s model number, serial number, and manufacturing company location. Some cards even mentioned changes in manufacturing and repairs over the years and dates.

Other machines may have long lost the warranty card, but you can still find a serial number or model number somewhere on the machine. Use these numbers to do some research and see if you can find its origin creator online.

If your machine has certain characteristics or an ornate design, you may be able to look up similar machines to pinpoint their manufacturer. Generally speaking, the simpler the design, the earlier the manufacturing date.

Don’t be surprised if you see some replaced parts on your machine – smaller parts were not made to last and were expected to be replaced after extended use.

Treadle sewing machines can cost anywhere from $100 to over $1,000, depending on the make, model, and condition.

Rarer models, such as those produced by Grover and Baker over a limited number of years, are valued in the thousands.

Small scratches and nicks are expected, but large defects will decrease your machine’s value. If your machine can still sew and is over a century old, you are also in for a large price bump.

To determine your machine’s value, first, find out its approximate manufacturer’s date and compare prices to others listed online. If you want to sell it, consider having it professionally appraised.

Treadle sewing machines are precious antiques that can be collected or used for their original purpose. Utilizing a pedal motion – through the treadle – to power the machine, you can sew in silence, comfort, without an electrical source, and more precisely according to your set pace.

These antiques can be worth anywhere from a few hundred dollars to thousands, and they can be found at auctions, on the internet such as on eBay, or even at garage sales. If you’re lucky enough to snag one, be sure to keep it in as good of a condition as you can!