Skip to content
Noname Antiques » How Much Is a 2-Dollar Bill Worth? (History, Series & Value) 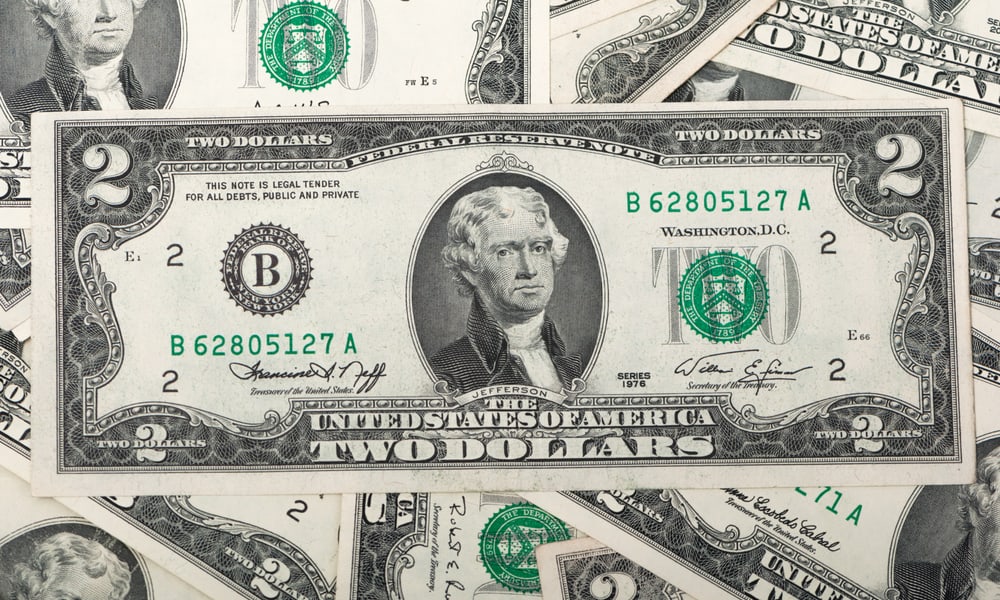 The two-dollar bills are unique paper notes that still circulate in the US while most people have never heard of their existence. It is a beautiful bill with Thomas Jefferson’s portrait on the obverse. The historic signing of the Declaration of Independence is a part of the appealing reverse.

Unfortunately, Americans have never accepted these paper notes and rarely used them. Nowadays, many people are unsure about how much is a 2-dollar bill worth. To discover that, you should know how old and rare the one you have is. Let’s see. 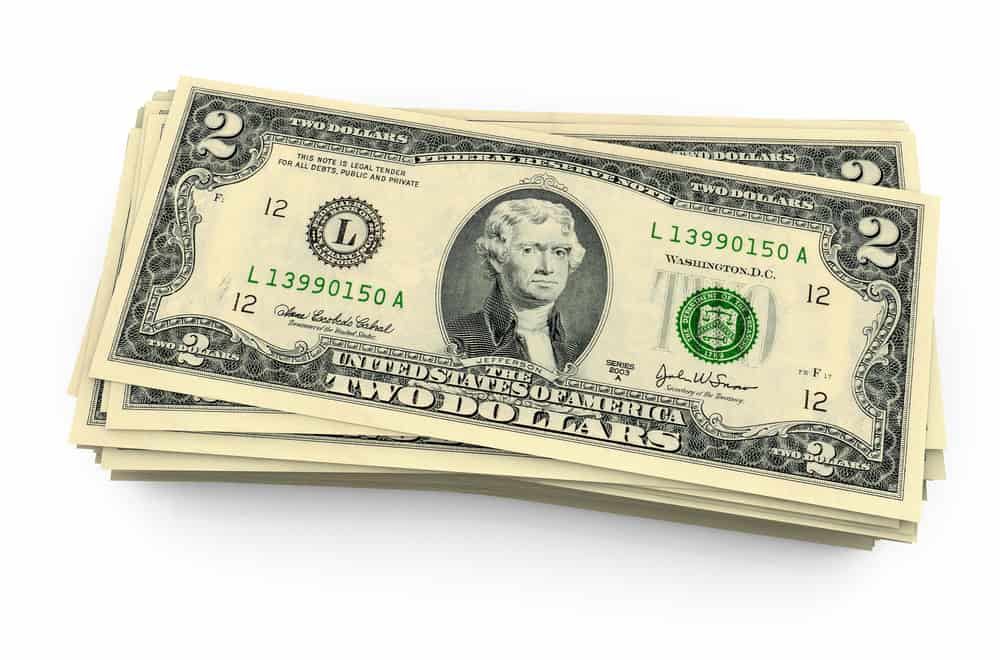 The US $2 bill is the most controversial American currency. The obverse with former President Thomas Jefferson adopted in 1929 is the oldest design of any US bill still in use.

The reverse adopted in 1976 is the second oldest design you can see on one American dollar bill. It features the Declaration of Independence with 42 of the signers painted by John Trumbull.

The $2 bill made before that period contained Alexander Hamilton on the obverse. The reverse design was changed a few times, and the most popular versions were those with ornate scrolls and Monticello, Jefferson’s home.

Most Americans believe that this bill is the rarest in circulation but are confused with its value of only $2. You can rarely have an opportunity to get it as a change in commercial transactions, making the illusion of its uniqueness.

In 1976, a $2 bill (two hundred cents) was assigned as a Federal Reserve Note, and its production continued, symbolizing the US Bicentennial. However, only about 1% of all currently produced American notes are $2 bills, resulting in inadequate public knowledge about its presence, significance, and value.

Although the current $2 note printing is always according to demand, you can effortlessly find most. However, each printage typically lasts for years because of low orders.

You can get these bills at banks by request. Plus, the gift shop in Thomas Jefferson’s home Monticello in Virginia often offers them as change. On the other hand, you can’t use it in vending machines, and most cash registers have no place for them. 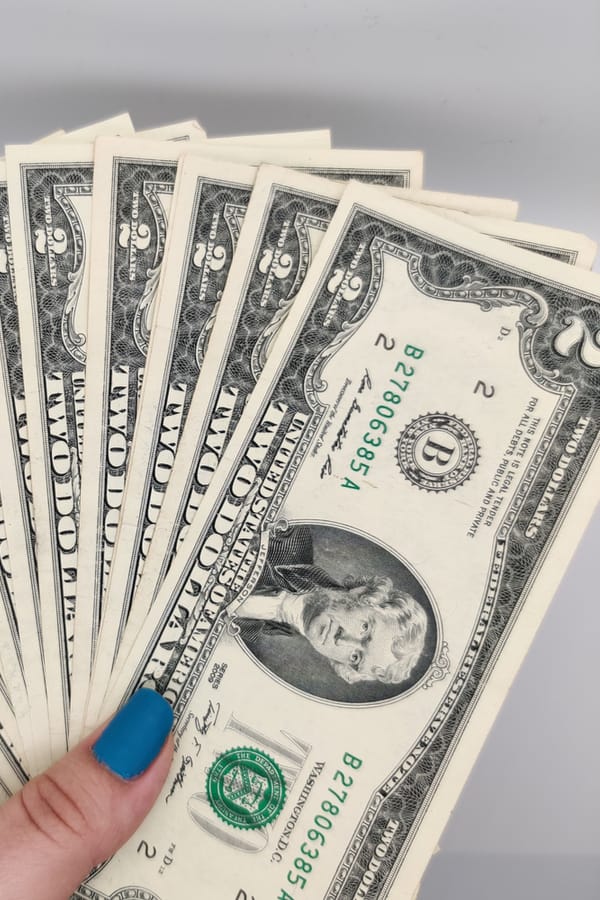 The two-dollar bills were printed in the following years:

You can find five types produced:

The first two-dollar bill ever printed was during the American Revolutionary War. It was a $2 Continental Currency Note from November 29, 1775.

Then, the US printed the first confederate two-dollar bill in 1862 in Virginia. This note is scarce nowadays since most people decided to destroy worthless Confederate Currency.

Since the US Currency Education Program guarantees that each note produced since 1861 is valid, you can always get the total face value for your $2 bill. From 1862 to 1863, the first $2 legal tender bills appeared. They were the first pieces with security features, including green ink and a red seal.

Attractive legal tender two-dollar bills (Rainbow Notes) printed in 1869 contained better security features that included fibers, partially blue paper, and multiple colors. Their current price is typical $175 to $670, depending on condition, but high-grade examples can reach over $2,000 at auction.

The next series printed in 1875 was $2 national bank notes (Lazy Deuce) with different values, depending on the bank that issued them. One unique piece was paid an incredible $45,000.

You can find numerous $2 bill types printed from 1869 to 1880. The small size antique variation had a large brown seal on the obverse. The next type was McPherson’s $2 bill from 1890 and 1891, which came with a small red seal.

Collectors love $2 silver certificates printed in 1891. Its huge advantage is that there are virtually no fake pieces on the market. They are typically worth $500 to $1,000, depending on preservation levels.

This note is still a legal tender, so you can go to the bank and get two dollars for it. Those in excellent condition are collectible and are worth more.

Collecting current $2 bills printed after 1953 is affordable and tempting for many collectors, particularly beginners. Be aware that these notes are rarely in circulation, and you need to purchase them from a coin dealer.

The next step is to find early bills printed in small series in 1928, 1953, and 1963. You can recognize sub-series within each one, ranging from A to G. Only collectors with unlimited budgets decide to start assembling the collection of rare large-sized $2 notes in series printed from 1862. 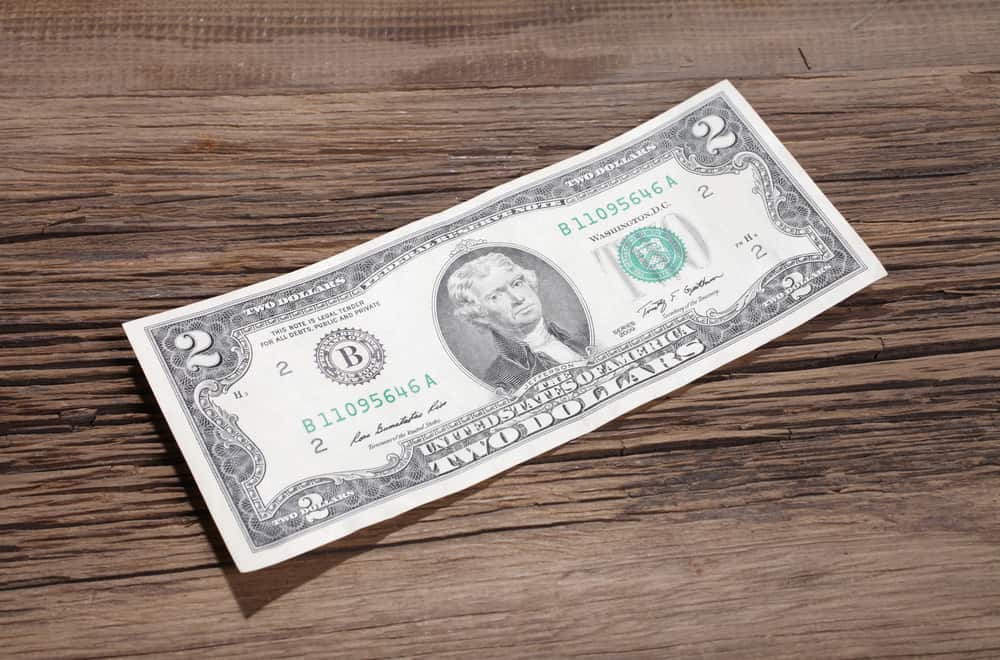 Sometimes, rarity won’t increase the note’s value, so you should check your $2 bill thoroughly. The price depends on a few factors, such as:

Demand – Since most Americans believe that a $2 bill is valuable, they put them away for rainy days. Unfortunately, that makes notes in uncirculated conditions abundant. Collectors typically avoid this note type, so low demand and high supply decrease their value.

Condition – As expected, the $2 bill in uncirculated condition will be worth more than worn-out pieces. Those well-centered notes have original crispness without traces of folding and use.

Very fine notes are still relatively crisp, but you can notice light stains and a few folds on the surface. The least valuable will be $2 bills in fine condition that spent years in circulation. It is full of creases, and you can see numerous stains on both sides.

Rarity – Even though most $2 bills were printed in low numbers, they are not particularly rare. They are just impractical, and most people don’t like them. Since these notes have never circulated widely, you may think they are scarce, but it is not the case. In fact, you can go to the bank and ask for them whenever you want.

Printing year – As you can guess, older two-dollar bills will be worth more than those printed recently. Since $2 bills produced from 1976 to 2003 are legal circulation tender in the US, you can get $2 for each. On the other hand, a piece with the red seal issued from 1928 to 1966 is worth more.

Serial number – As I have already mentioned, you can get at least two dollars for any $2 notes, but pieces with unique serial numbers can be pricey. For instance, the bill with serial number 1 will bring you some premium.

Red seal – This US note type printed from 1862 to 1971 was a direct obligation by the US government. Everyone who possessed them had the national debt piece. These $2 bills were in regular circulation by the 1960s and finally removed as legal tender in the 1990s.

Misprints – Unproperly placed or doubled seals on the $2 bill means a higher price in most cases.

Palindromes – It is also possible to find these radar notes, $2 bills with the same serial numbers when reading from backward and forward. Notes with repeated numbers are relatively rare and can be worth more for collectors.

Star (★) – When noticing a star next to the serial number, you will know that it is a replacement bill that is relatively rare and often costs more.

The 1976 $2 bill error – In this case, you can see the serial number in two places on the obverse. The first one is on the top right side, while the other is printed on the bottom left bill side. You can often get $400 to $800 for such a note in uncirculated condition. 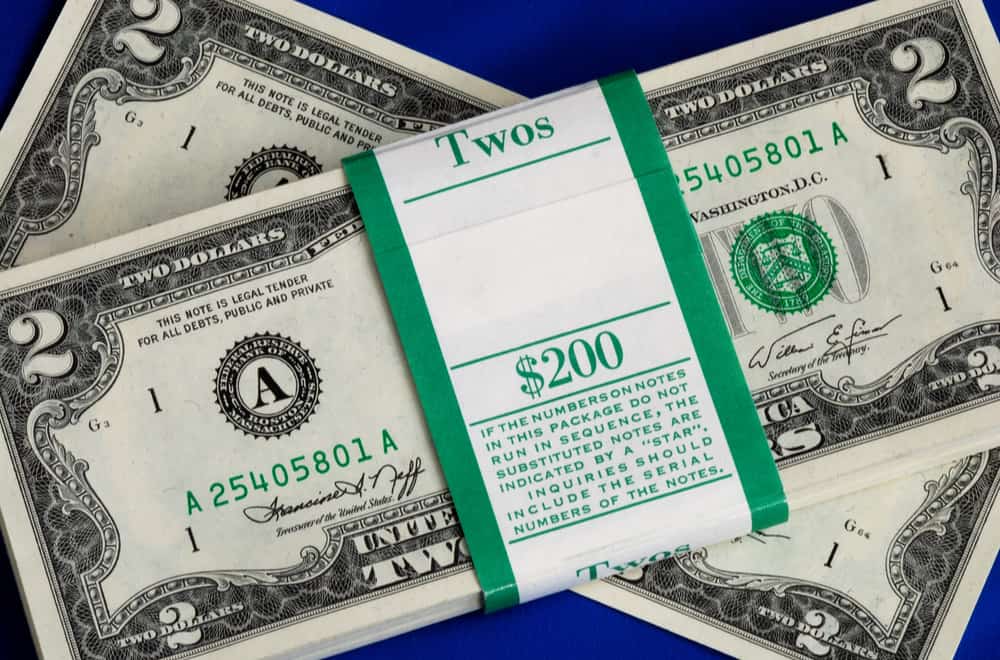 The genuine ladder is the rarest possible $2 bill with 12345678 number series, and you can find only one printed in every 96 million notes. Therefore, such a note always commands premium value.

Some collectors consider a note with the A87654321A series a step-down (reverse) ladder. They are interesting but less desirable than up ladder notes. Finally, you can also find an inexpensive broken ladder form looking like A01200304A or A00012345.

The Australian $2 note with the first prefix under 1,000 is worth at least $3,000. The most appreciated are those with a star (asterisk) after the serial number.

The Canadian $2 bill still retains its face value, although it doesn’t print from February 18, 1996, and is not legal tender in that country. If you have any, you can send them to the Bank of Canada, and it will redeem them.

In most cases, the $2 bill is real since it is among the least counterfeited paper money worldwide. If someone decided to commit fraud, it would probably print fake $2 bills from the 19th century.

There are two ways to distinguish real from counterfeit $2 bills. Let’s see.

The fake $2 bill is counterfeit for sure if it is:

If you have a sensitive touch, you can recognize a fake note by holding it between your fingers. It always feels like printer paper.

Paper money experts are collectors themselves and can quickly recognize a fake note even when looking at its image on a computer screen. So, hiring one of those people can help you make a real deal and save you money.

As you can see, the 2-dollar bill is typically abundant on the market, and you can effortlessly complete a collection for an affordable price. You will need a high budget for a series of large size two-dollar bills, starting from 1862. On the other hand, even novices can collect current notes issued after 1976.