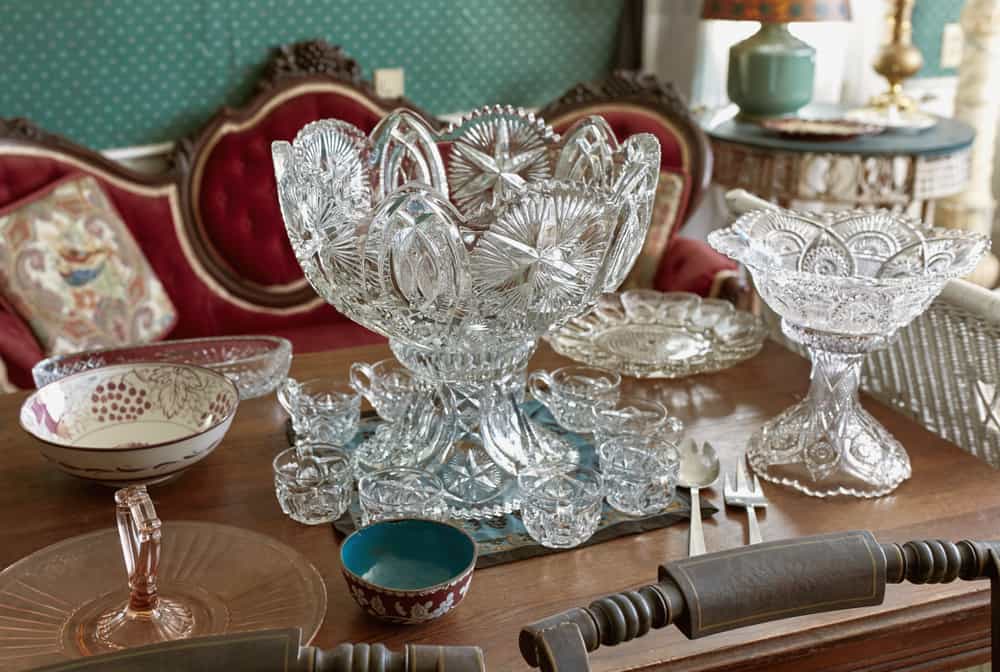 Vintage crystal is some of the most sought-after antique glass types. It’s characterized by transparent glass that’s adorned with intricate patterns. In this article, we’re going to cover everything you need to know about vintage crystal pattern identification.

If you’re interested to learn about the types of crystal patterns, how to identify them, and date the crystal piece, this article is just for you!

Crystal patterns have been around for a while, with some of the earliest examples dating back to the 15th century. George Ravenscroft received a protective patent for clear crystal glass in 1673 and began the first mass production of various crystal pieces.

Crystalware like that usually featured religious or metaphorical imagery, but geometric patterns were also made. However, crystal glass really took off in the 18th century thanks to technological advances in the glassmaking industry.

Manufacturers all over Europe popped up and began producing their own crystal glass, but England was renowned for making the most illustrious ware. During the Victorian Era in the 19th century, crystal glass was a sign of wealth and affluence and was at the peak of its popularity.

Now we can start looking at the types of vintage crystal patterns and see how you can identify them.

Here’s a list of some of the most popular vintage crystal glass patterns with their description and most notable manufacturers:

How Do You Date Vintage Crystal Patterns?

There are a few indicators you can look for to correctly date vintage crystal patterns. Keep in mind that crystal glass was produced for decades and in some cases centuries, so it’s difficult to pinpoint the exact date of production if the item doesn’t have official documentation.

However, here are a few things you can investigate to get a rough idea of the age of a crystal glass piece:

The first you should examine is the crystal glass itself. Early pieces were often made with leaded glass, which is heavier and has a less pronounced shine and hue than later crystal pieces made with lead-free soda-lime glass that got popular by the end of the 19th century.

Some patterns were more popular than others during specific time periods. However, it’s too extensive to cover in this article, so you should always consult with an expert who can estimate the date simply by analyzing the pattern.

Most pieces are embossed with the mark of the manufacturer, and if you’re fortunate enough to have your piece with the mark, you can research online to see when that manufacturer was in business.

How Do I Identify an Old Crystal Pattern?

Identifying the pattern of antique crystal glassware is one of the hardest things to do, simply because there were that many. In addition to that, most patterns were made by several companies, so there are slight variations even in established patterns.

If you’re lucky, you might find the name of the pattern embossed somewhere on the piece, but it wasn’t a common practice and it becomes much harder to identify a pattern if it’s not printed on the piece.

That’s why it’s always best to check a reference book or an online database to find the pattern of a crystal piece. We’re going to recommend the best resources for that later in the article, but here’s a list of some of the most popular and easy to recognize patterns:

Features so-called “hobnails”, which are small raised bumps on the surface of the glass. The pattern usually starts with bigger hobnails, which become smaller and smaller.

This pattern was extremely popular during the Victorian era and was made by several famous companies, including Hobbs Brockunier & Co Fostoria, Imperial, and Westmoreland.

This is one of the most popular patterns, which features a daisy flower motif, created by small dots arranged in its shape. The “daisies” are repeated throughout the piece in the same consistent pattern.

This pattern was made by nearly every crystal glass manufacturer, so it was extremely widespread and most producers had their own little twist on it. It was so popular that Hobbs Brockunier & Co simply called it “Pattern 101”.

Other known manufacturers include Fostoria, Imperial, and Westmoreland.

This one is also one of the most widespread and easily recognizable crystal patterns. It features a series of small diamonds arranged in a repeating pattern throughout the piece and can be found on nearly every type of crystal glassware.

This pattern was produced by many different companies, including Tiffin, and Anchor Hocking.

This pattern features several separate lines that are curved several times throughout the pattern. It’s called “the scroll” because you could think of those lines as unfolding scrolls.

This pattern was made by several different companies, including Tiffin, Imperial, and Westmoreland.

This pattern first appeared at the start of the 19th century and can be found on most types of glassware, including crystal pieces. It features a series of small indentations that are arranged in a repeating sequence.

The name of the pattern comes from the fact that those indentations look as if someone had pushed their finger into the glass while it was still hot, leaving the “thumbprint”

This pattern was made by many crystal glass manufacturers, including Fostoria, Imperial, and Westmoreland.

The Star of David Pattern

If you know what the Star of David looks like, this pattern is easy to recognize. It features two interlocking triangles that create a 6-pointed star, the symbol of Judaism.

Keep in mind that each manufacturer put their own twist on this pattern, and some stars have more points and are arranged in different patterns throughout the piece.

This pattern was made by some crystal manufacturers, like Tiffin and Imperial.

Here are a couple of reference books we recommend you check when identifying a pattern:

First published in 1997, this book is written specifically to identify patterns of crystal stemware. If you think you have a crystal cup or glass that might be worth something, you’ll probably find its pattern among the 4,000 that are described in this book.

This book published in 2012 was written by an antique crystal glass collector specializing in pieces made by the Waterford company. It includes descriptions and pictures of over 90 patterns that were produced by this company.

Finally, if you want to identify an old crystal pattern, you can ask for expert help. Replacements, Ltd. features a team of experts that will identify the pattern free of charge.

All you have to do is to upload a picture according to their guidelines and wait for 3-5 days for an answer.

How Can I Tell If My Crystal Is Valuable?

If you’re like most people, you probably have a few items around your home that you think might be valuable but aren’t sure whether they could sell for much. Some antique crystal pieces can be worth 6-figures, so you should definitely get them appraised.

You might be sitting on a fortune without even knowing it. Here are the most important factors influencing the value of your crystal:

Pieces with rare designs are always the most valuable ones. No one is going to pay a lot for a pattern that can be found in every thrift store around the city. Only rare and intricate designs are worth thousands of dollars.

Some crystal manufacturers were more renowned than others. Pieces made by the most famous producers are always worth more than those made by lesser-known competitors. For example, Waterford and Baccarat have made some of the most valuable crystals.\

Just like with all antiques, the condition of an item is one of the most impactful factors determining its value. Crystal pieces in mint (perfect) condition are the most valuable ones, and even a slight defect can greatly reduce their worth.

Even the rarest and most sought-after crystals aren’t worth much if they’re chipped, cracked, or damaged in some type of major way.

A piece of crystal with a long and impressive history is always going to be worth more than one without any background information. If you can date your piece and connect it to a famous event or person, that will add to its value significantly.

Some crystal patterns are more popular than others. If you have a piece featuring a popular pattern that’s currently in demand, it’s going to be worth more than the one that has no interest among the collectors.

The quality of the crystal itself will also affect its value. Pieces made with lead crystal are going to be worth more than those made with soda-lime glass. It’s partially because they’re older by default, as lead glass predates soda-lime glass.

Finally, the rule of thumb which applies to all antiques – the older the piece, the more valuable it’s likely to be. It’s because older crystals are more difficult to come by, and most of them were destroyed through the centuries.