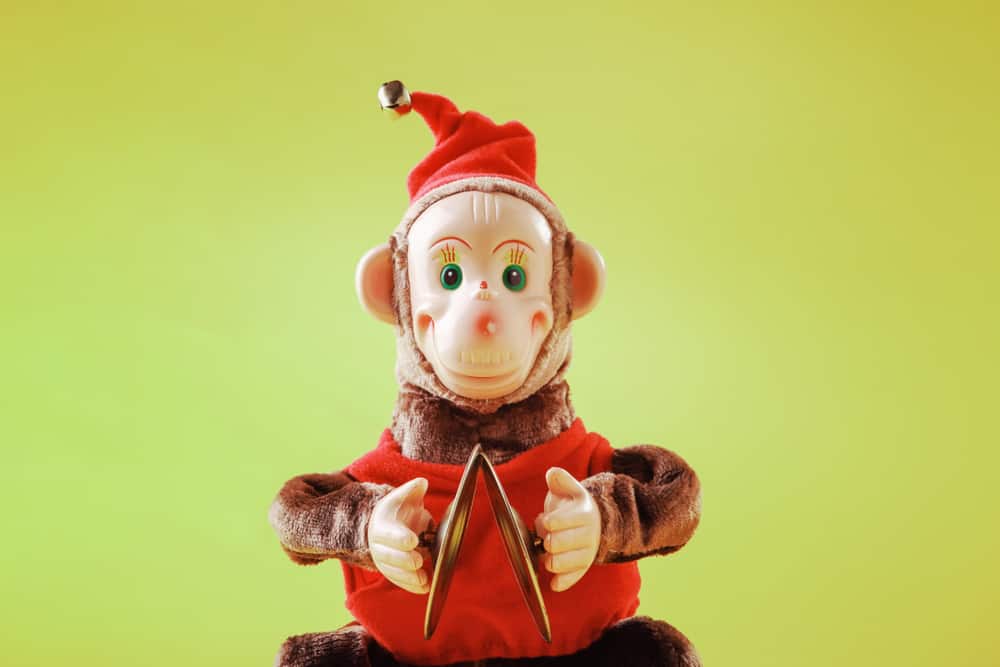 Monkeys have long been a part of human civilization, perhaps because they are the most similar to us in the animal kingdom, but the truth is that they have been present forever.

The Cymbal Monkey, one of the most well-known toys of the twentieth century, was inspired by them. We believe that its history is one of the most fascinating of all toys, in addition to its status as a cultural icon and a collector’s item.

In this article, we’ll go over every aspect of this iconic figure, who has appeared in films and books and is ingrained in society’s collective psyche.

What inspired the concept of a monkey clothed in bright colors playing a musical instrument?

It has been around for ages, believe it or not. Profiting from the lives of animals is increasingly being recognized as a horrible thing, although it was commonplace a few hundred years ago.

It’s tough to understand the attitude that was formerly held about animals in a time when zoos are losing appeal, circuses no longer use wild animals, and wildlife organizations come out in defense of multiple species.

Only over a century ago, circus monkeys were extremely popular. They gained popularity in street shows after being utilized in fairs.

They used to form a duo with a musician while collecting money from the general audience. The monkeys were favored by the musicians because they could take a cup or hat in their hands and pass it to receive the money.

Some of the better-trained monkeys even learned to play rudimentary instruments like cymbals or the tambourine. The monkeys used to perform alongside a musician playing the barrel organ, a common instrument in street entertainment.

Who invented the cymbal monkey?

The image of a monkey playing an instrument had already been implanted in the collective unconscious of the public; it was a reference image that made children happy and drew crowds to the streets.

Daishin C.K, a Japanese business that was a pioneer in manufacturing mechanical toys in the early 1950s, was the first to turn it into a toy. Most of his toys were a hit, but the monkey who played the cymbals would set a new standard.

They had no idea that with this new toy, they would be producing an icon in pop culture for years to come.

The Japanese toy company was oriented to export its creations to the United States market, as well as to the local market. The success was such that from 1950 to 1970 Daishin C.K released several versions of the same toy, resulting in a wide variety of cymbal monkeys.

The competition copied the great success of the Japanese manufacturers and they were in charge of further enlarging the range of possibilities in which you could get this unique toy.

However, Jolly Chimp was the most famous due to a few distinct characteristics. Jolly Chimp was a battery-operated mechanical toy that not only clapped his hands while playing the cymbals but also had a mechanism in his head that caused him to expose his fangs and protrude his eyeballs forward.

These two characteristics give the toy a very disturbing appearance, and many people find it terrifying. This was also one of the reasons why the toy would later become the protagonist of many horror movies.

Following Jolly Chimp’s huge popularity, various versions were released by toymakers, each with minor changes in the toy´s appearance.

Charley and Charlie Chimp were two of the characters. In the mid-1960s through the early 1970s, a Japanese-built Charley Chimp was sold in the streets of lower Manhattan by a huge number of street peddlers in NYC. They came from Hong Kong or Taiwan to invade the American market.

His face was gentler. This version omitted the red eyes, which provided a particularly sinister impression, in response to critics of the original’s fear.

After Daishin C.K. discontinued manufacturing their classic cymbal monkey in 1970 other brand names appeared like Charlie Chimp. This version resembles the original almost exactly. They only changed the toy’s outfit.

Pepi Tumbling Monkey made by Yano Man Toys first emerged in the 1960s. This specimen, unlike its predecessors, has a cute and cartoonish appearance.

Clockwork Musical Monkey with Clashing Cymbals by Clockwork Company and Westminster Inc.’s Magic Monkey are two other monkeys worth mentioning.

Because of the toy’s appearance, the musical Jolly Chimp has been so rooted in popular culture that it has appeared in movies and even novels.

The monkey’s relentless cymbal playing is unnerving and striking, but his facial expressions are the key to his fame and subsequent legend.

When you press the original toy’s forehead (copies didn’t always have the same mechanism), the monkey’s wide-open eyes pop out of their holes, and its mouth move, revealing its teeth.

The eyes, on the other hand, have unusual red rings on their contours and their pupils are immovable. That makes the monkey’s expression disconcerting, as it is a constant and empty expression.

Add in the fact that he flashes his teeth and gums while clapping sardonically on the kettledrums. You’ve got yourself a fantastic piece of terror with that toy´s appearance.

Then there were urban legends about supernatural experiences with the monkey. Some say they scared the kids instead of entertaining them. The toys were then donated to other children’s organizations, such as orphanages and mental facilities.

According to legend, the monkey calmed rather than scared youngsters with mental problems, and they were required to be part of the collection of toys given to patients in numerous medical institutes.

However, reports of monkeys lighting themselves up at night while playing cymbals accompanied this popularity in mental facilities.

They also claim that if it was switched off by someone, the victim would die the next day. The cymbal monkey has since been the protagonist of movies, video games, and popular culture novels based on this urban legend. It became not only a terror figure but a symbol of emptiness and stupidity.

Stephen King’s short story “The Monkey” is one of his most well-known works. It was originally published in 1980 as part of a collection of horror short stories, and it was a huge hit. The story was nominated for a British Fantasy Award in 1982.

The cymbal monkey reappeared on one of Stephen King’s book covers in 1985, this time for Skeleton Crew, another collection of short stories. “The Monkey” was included in the writer’s horror story repertoire once again.

What to know before purchasing a toy cymbals monkey?

Thanks to the success of this toy, many replicas have been manufactured since its creation and not all of them are desired by collectors. These are some criteria before buying a collectible.

Before purchasing one of these cymbal monkeys, make sure it is vintage. Fabrics are used in the clothing of the antique toys, and the bodies are composed of plastic with a metal inner mechanism.

The design of its eyes is another of its most distinguishing qualities. With a lost glance on the horizon, they were always painted yellow with red outlines.

The toy´s outfit varies in color and includes striped designs, blue pants, a redshirt, and plaid blue overalls or red buttons on their vests, depending on the manufacturer.

There are cymbal monkeys that go on sale after having been in movies or video games. These are also highly sought after by collectors and can be a good source of future profit.

What should you look for in a good cymbal-playing monkey?

Keep in mind if they are battery-powered or mechanical. The mechanics will not have certain qualities such as sounds or more complex movements.

On the other hand, the mechanics are usually made with more detail and painted by hand, which increases their price among sellers and collectors.

What should you expect to pay for a toy monkey with cymbals?

Depending on the style, a toy monkey with cymbals might cost a lot of money. Later versions cost between $10 and $20, and vintage toys and collectibles cost $100 or even more in some auctions.

Where can I find a cymbal-playing toy monkey?

These toys are very popular and you can find several well-preserved copies on ads and sites such as eBay or Amazon. Also in specialized pages of collectors of antiques or toys as Etsy.

Cymbal-banging monkeys have had a long history and an interesting journey through our popular culture. They have been present since they were created in 1950 and will continue to be a source of inspiration and part of future movies, series, novels, and video games.