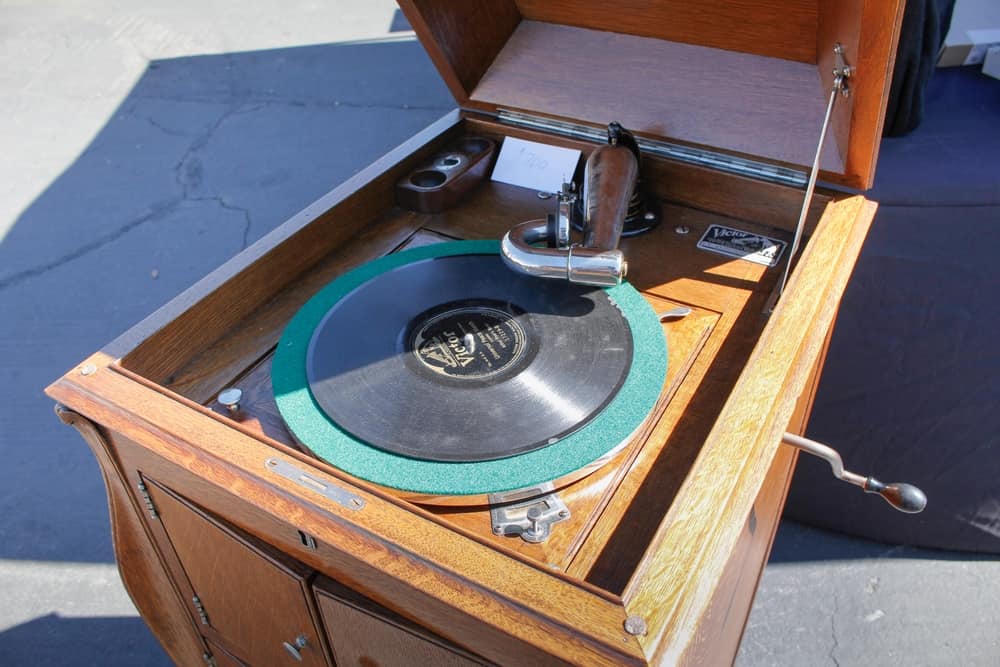 The antique Victrola record player has been a collection item for nearly 100 years. Since the original models were only produced for a short time, buying an antique Victrola is considered a success for any avid collector.

With the most popular antique model’s distinctive design – including its hidden sound horn – the Victrola brand made waves in the music department during the 20th century.

Today we’re diving into the history, manufacturers, and value of antique Victrola record players to teach you all there is to know about this historical musical item.

The History of the Victrola Record Player

All record players would not be possible without the invention of the cylinder record by Thomas Edison. This led to the development of the flat disc record by Emile Berliner, improving Thomas Edison’s design and carving the way for Victrola phonographs.

Victrola introduced new music to the world over a century ago, starting at the Victor Talking Machine Company in Camden, New Jersey.

Since then, Victrola has produced many different models of record players under both the Victor and Victrola name. Some models have hidden sound horns, others have cranks, and the materials used have changed over the years.

The Victor Company was bought out in 1929 when its designs began to shift with changing technology. Initial record players were basic in their design, but by the early 1900s technology advanced, using more plastic compounds which reduced surface noise.

The selling of the Victor Company could be one of the reasons that the most popular makes and models are from 1880 and 1930. Even so, millions of Victor and Victrola record players were created during this time, which means not every hundred-year-old Victor/Victrola is a valuable antique. Instead, collectors now look for the models of Victrolas with the lowest production numbers.

The name “Victrola” is found on record players from the early 1900s to modern times, but not all of these record players are legitimate antique phonographs.

Eldridge Johnson was one of the early business partners of the Berliner disc design, one of the original designs for record players in the late 1800s. His company, “The Berliner Gramophone Company,” was eventually moved to Montreal. They sold record players there to avoid certain legal blunders with competing companies in the U.S.

Johnson went on to found the Victor Talking Machine Company in 1901. This company produced an innovative turntable record player, then called a phonograph. At that time, the company used both “Victor” and “Victrola” on its products, many of which are currently considered antique record players.

Johnson led the company to become the dominant leader in the gramophone industry. They competed against other big names in the business, like Columbia, Sonora, Regal, and Silvertone. This is the true manufacturer of the antique Victrola record players collectors seek after today.

The Radio Corporation of America

The Radio Corporation of America (RCA) purchased the Victor Talking Machine Company in 1929. Most of the RCA’s products began to change the vinyl aspects of the record player into plastic, making many new record systems incompatible with those from the past.

The RCA continued to produce record players with the inscription “Victrola” or “RCA Victor” through the mid-1990s, which means there are many mislabeled gramophones that are not genuine Victrola antique record players.

As of 2022, Innovative Technology revived and purchased the Victrola trademark. This company produces nostalgic turntables, but with a much more up-to-date touch. Perfect for modern record-lovers, these products are great for the home but are incompatible with the antique phonographs collectors are interested in.

How to Value an Antique Victrola Record Player

Generally speaking, the older and rarer your Victrola is, the more expensive it will be.

If you want to purchase a Victrola, you should make sure you’re buying it from a true phonograph specialist or have a specialist look at the item to confirm it is legitimate before purchase.

Original Victrola record players used flat records made from a shellac-based compound. These records became brittle after pressing on them; however, they were durable enough at the time, so long as you cared for them. On most of these antique Victrolas, modern-day vinyl “LP” records will not work.

The bases of most antique Victrolas are made of natural woods like mahogany or oak. You could find varying finishes, although oak Victrolas are usually the most expensive.

The later the model, the more plastic was incorporated onto the actual Victrola record player. This could be a key way to note if your record player is truly antique or if it was created during the RCA era of Victrola.

If your Victrola has an “RCA Victrola” stamp, it is a dead giveaway that it is not the real antique Victrola we are looking for. Most antique Victrolas will have the original maker’s mark on a date-plate made of metal.

You should be able to find this date-plate either on or near the motor board (under the lid) or under the turntable (for those made in the 1920s). If you can’t find it, be sure to also check inside the floor model’s cabinets or on the edge of the base for tabletop versions.

The original models of Victrolas included a unique serial number for most products, making it a bit easier to date the record player; however, serial numbers were restarted twice, meaning certain numbers could have come from three separate eras. Most Victrolas with internal horns have a serial number over 501.

When reading the date-plate, you’ll usually see the full company name or the abbreviation “VV” for “Victor-Victrola.” Some date-plates also have the model type, designated by a letter, followed by the model number listed in Roman numerals. You might also see text on the plate with trademark and copyright information.

It’s important to note that modern-day record players by the Innovative Technology company use the Victrola stamp. Luckily, you can easily differentiate these from the antiques by their electronic components and design, although older “Electrolas” made after 1925 will also be electronic.

Few Victrolas will also have a license sticker on the back, bottom, or inside of the product. These stickers have a large text on them describing patent and copyright details. Most of these stickers have been lost over time, but if you’re lucky enough to find one, it will have a date on the bottom left corner. This is not the manufacturing date, however, and is only used to show when the product’s legal retail price was established.

There are many Victrola designs, big and small, tabletop or floor models, electronic or not. The common theme among Victrolas is their square shape and hidden sound horn.

Below is some information about both the most common (cheapest) and least common (most valuable) antique Victrola record players listed by sellers today.

You can find plenty of seller options by typing “Victrola” on eBay, Etsy, or even Google shopping, but not all of these options are reliable or real. Buyers in the market for an antique Victrola need to find a genuine seller, you’ll need to go through a strong vetting process.

Fake, horned Victor record players can be found on many markets. Buyers should look out for these signs of a fake Victrola:

Hidden-horn Victrolas are often not replicated; however, they may be misrepresented by having fake date-plates to make them seem more valuable than they are. A true collector should be able to analyze the record player and its components to confirm whether or not it is legitimate.

Antique Victrola record players come in many shapes, models, and sizes. The most valuable and rarest models are the Victrola XII and the larger Victrola XVI in an oak finish.

To value a Victrola, you’ll need to analyze the model number, materials used, and authenticity. The best way to do so would be through a professional Victrola collector or a professional antique appraisal company.

No matter which antique Victrola record player you have, you’re surely the proud owner of a piece of musical history.