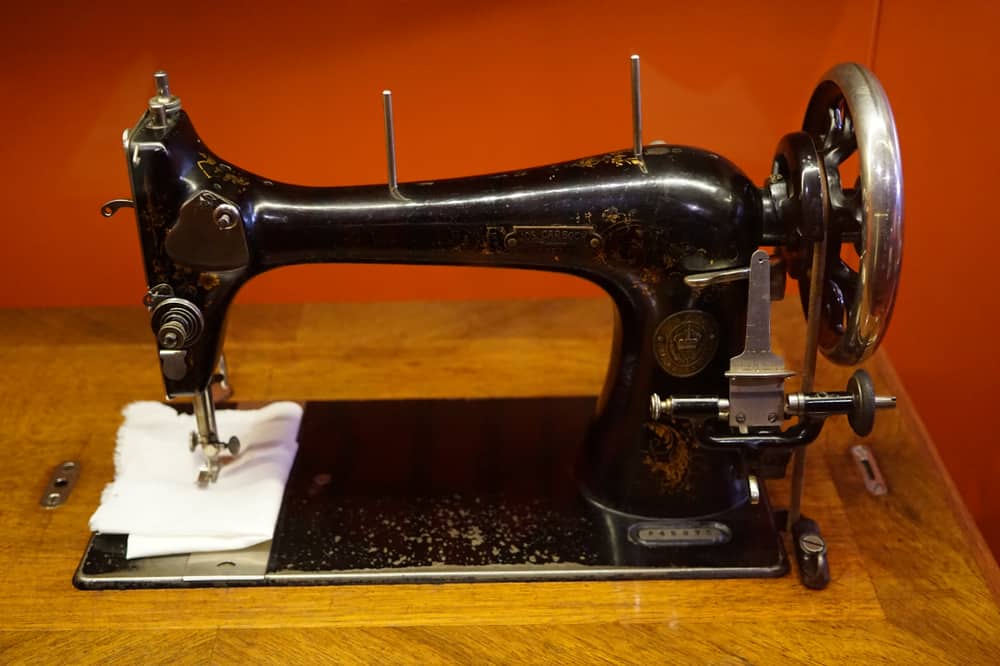 Clothing was made entirely by hand in the early 1900s, with families sewing pants and shirts with a needle and thread.

The sewing machine’s history evolved throughout the late 1800s and nineteenth century.  By 1755, the german Charles Fredrick Wiesenthal invented a prototype that made sewing easier, but it was still very rudimentary.

Each new invention based its models on the one before it, and for many years there was “The War of the Sewing Machines,” as manufacturers sued their competitors, claiming that these similar machines were based on their own.

The National Sewing Machine Company was one of the most important and pioneering companies in the world of sewing machines that emerged during the nineteenth century.

Its machines are highly valued in the antique market, not only for their quality and innovation but also for their significance in the history of the sewing machine.

Learn how to identify them, their most famous models, and the prices that are handled in the market if you want to acquire one of these ancient beauties.

Barnabas Eldredge founded the illustrious National Sewing Machine Company. However, the company was formed gradually, and its history is both complex and fascinating.

Barnabas was an entrepreneur who entered the industrial sector at a time when mass production of articles was becoming common in various sectors of the global economy.

Eldredge wanted to build high-quality sewing machines, but he needed to work with a company that could build high-precision machinery.

That is why he became involved with the Ames Manufacturing Company, a Massachusetts firm dedicated to the manufacture of firearms.

Eldredge produced models that surpassed the competition; after a few years in the business, he realized that he could have a better market in the northeastern United States.

He bought the parts and components and other Manufacturing tools from Ames Manufacturing and relocated to Chicago, Illinois to start his own company.

After settling in Chicago, he formed a partnership with the June Manufacturing Company to handle the production of his new sewing machines, as this company had been in business for several years and knew how to build quality machines.

One of his most successful models was the Jennie June, which debuted in 1879 and was based on a Singer model.

Eldredge’s models were very successful, and the company grew quickly, but they had to relocate again because skilled labor for their sewing machines was unavailable.

They relocated to Belvidere, a small town with large engineering staff, in 1886.

In 1890, the president of the June Manufacturing Company dies, and Eldredge merges the two companies, giving birth to the National Sewing Machine Company, with which he will achieve great fame and prestige in the world of sewing machines.

The company was very adaptable and eager to diversify, producing not only sewing machines but also bicycles, washing machines, toys, and even food grinders.

It pioneered many sewing machine innovations, such as the Model A Rotary with automatic tension or the Vindec C with a covered needle bar and a presser foot bar to keep dust out of the machine.

But it was the Reversew, a long shuttle model that sewed in both directions, that made the most impact on the industry. This design was introduced in 1935 and forever changed the industry; later, other brands copied the model with minor modifications.

Barnabas Eldredge died in 1911 and was succeeded by David Patton, a company employee for over 35 years.

After World War II, the company was unable to compete with the new machines that arrived from Europe and Japan at extremely low prices, and it was forced to close its doors in 1953.

The company specialized in the production of sewing machines for retail establishments.

At a time when industrialization was impacting all markets and only large corporations could afford to replace their entire infrastructure, The National Sewing Machine targeted small businesses.

They were among those in charge of reorienting the market toward regular people, who gradually began to acquire a sewing machine as a home tool.

Throughout its history, the company produced dozens of models, but we will focus on the most representative or popular ones in the current antique market.

You should also be aware that the National Company did not only create its models but also designs for other companies, so there are many brands whose machines are created by the National Sewing Machine Company.

In the United States, it is also known as Paveway. This model includes sheet tension as well as the first plate bobbin winder. This machine was not released under the National brand but was one of many models sold to retail sewing machine stores.

It is a machine that was introduced to the market in 1910 and featured one of the time’s novelties, automatic thread tension. It was a very popular model that lasted for many years. That is why they are the most common in the antique market today, and you are very likely to come across one at some point during your search.

Several Rotary models went to the market in 1910. While the National Company claims to be the inventor of the electric sewing machines, other brands have strong evidence to hold that title. What is true is that it was a market pioneer and was widely accepted.

It was introduced to the market in 1912, and the main novelty of this machine was the use of special presser feet to prevent dust from entering the bearings, resulting in a longer life than other sewing machines.

It is possibly the most well-known and has made the greatest contribution to technological advancement in the textile industry. This model allowed you to sew on both the back and the front. It was a fantastic innovation that was quickly copied by every other company.

These machines are extremely rare because they were manufactured before 1890 when the company had not yet fully merged with the June Manufacturing Company and Barnabas Eldredge was still modeling and selling them separately.

How to Recognize a National Sewing Machine

Most sewing machines have the brand name prominently displayed on the arm of the machine. It is typically printed in large letters.

There was no attempt to conceal the logo because it was important. In addition, the sewing machines have a metal plate on the bottom or back that has the company name and serial number engraved. So, if the logo on your sewing machine has faded, you can always go to the plate. other companies apply the decals for information in future years, but it’s not the case with National sawing machines.

Another factor to consider when purchasing National sewing machines is the brand. Because the company created many models for other companies, even if it doesn’t say “National,” it could be a National even if you don’t know it.

We’ve left the names of the companies for which National manufactured sewing machines here so you can easily identify them.

Serial or model numbers are the most reliable way to determine whether or not your machine is genuine. This system, like a birth certificate, will tell you which company made it, when it was made, and even which factory it was made in.

You can find useful resources and guidance in the International Sewing Machine Collectors’ Society for this purpose.

The Singer Sewing machine is famous for using this system successfully to identify its models.

Remember that the industrial revolution forced everyone to be innovative at this time in history, and every successful company stood out for precise innovations.

To successfully identify an old sewing machine, you must first understand the history of the company and its contributions. National specifically had input like sewing on both the back and the front with their Reverse model.

What is the value of a National sewing machine?

A sewing machine’s value will vary depending on the basic criteria that it must meet to retain its value.

The higher the value you can ask for it in the market, the better it is in conservation.

This includes the paint, logo, cabinet, the integrity of all its parts, and whether or not the sewing machine is still functional. Collectors also pay extra money for original manuals.

Some models were produced in small quantities or have historical significance. These are the models that collectors are most interested in and for which you can command a higher price if you sell them at an auction.

Sewing machines bearing the Eldredge logo, for example, are highly valued and sought after in the market because they were produced before the company’s formal name and were based on a design created by the founder.

Valuing a sewing machine can be difficult even for an expert, so we recommend consulting a specialist, but you can also get an idea of the prices you can pay or obtain by visiting web pages like eBay or online auctions that have recently sold some of these models.

Remember that it is always better to look at advertisements for machines that have already been sold rather than those that are about to be sold, as these are the prices that are most likely more in line with market reality.

We will leave here a couple of examples, so you can have an idea of the values.

Sewing machines are historical objects that assisted in the advancement of the industrial age. Having or acquiring one is a great investment, not only because you will have a piece that was made to last a lifetime, but also because its value will rise over time.

If you know how to keep it in good condition, it will be very valuable and a possible source of income for you and your family in the future.