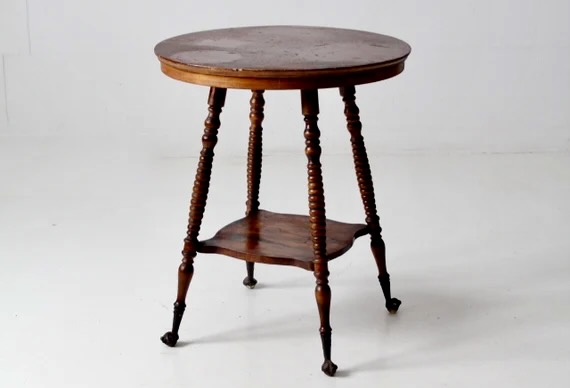 Did you know that if you have a table that has a clawfoot it could be worth money? For example, an antique claw foot dining room table or a claw foot card table in excellent condition can be worth hundreds of dollars for the right buyer.

In the design of these tables, the foot is fashioned to represent a bird’s claw gripping a ball. That is why they are sometimes also called claw-and-ball feet. An alteration of the theme is a lion’s paw with claws.

In this article, we have collected information about the history of the clawfoot table and the different styles.

Most historical sources believe the clawfoot design was derived from Chinese imagery of a dragon holding a crystal ball in its claw. However, others believe that the inspiration came from a crane holding a stone in one claw while watching over her young.

The fact is that designs from China and Japan came into Europe through trade. European artisans would have seen examples of the ball and claw design on, for example, porcelains.

Before the claw and ball were used on the feet of tables, they appeared on English silver and then quickly spread to other arts and designs, including furniture. English cabinet makers get the credit for transforming the dragon’s claw into a bird’s talon.

The clawfoot design was the most popular in Great Britain from 1710 until 1750. In America, which in those days lagged behind Europe in trends, the ball and claw design remained in fashion for longer, until the end of the 18th century.

Most antique clawfoot tables made the feet from the same material as the rest of the table. For example, a mahogany table would have a mahogany ball and claw feet. Occasionally, different materials were used such as a glass ball or brass claw feet.

Antique furniture experts use the character of the clawfoot to identify the origin of the table. For example, makers in Philadelphia preferred a slightly flattened ball while New York craftsmen used larger, more squared feet. Let’s have a closer look at different styles of antique clawfoot tables.

The best-known clawfoot tables are those made by craftsmen who followed the blueprint set by an English furniture maker Thomas Chippendale who used English, Chinese and Gothic elements in his designs. His father was a carpenter, so Thomas came from a family that had long been in the wood processing trade.

Thomas has often been credited as the person who introduced the claw and ball foot design to England, since it was featured in his publication, Gentleman and Cabinet-Maker’s Director in 1754. However, the clawfoot design had already been used in silverware before the Director’s publication in 1754.

The Director quickly became fundamental for furniture designers and the design templates from the book were used by furniture makers first in Europe and later in the US.

The first clawfoot designs in the Chippendale tables were faithful to the Queen Anne style, see below, but Thomas soon realized that innovative designs kept the sales figures up. This is when he began blending other styles into his designs.

Many Chippendale pieces have the clawfoot design on a Queen Anne-style cabriole leg. As well as the more traditional claw, Chippendale tables also used the adapted version of a lion‘s paw in the UK.

The bird clawfoot design was the more popular choice among furniture makers in America where makers from different regions gave the ball and claw designs their own stamp. They often shaped it like an eagle’s claw in reference to the popular American symbol.

If you would like to find out more about Thomas Chippendale, you can find a fuller biography here.

What materials were used in the Chippendale tables?

The Chippendale carpenters preferred to use solid wood and the most exquisite pieces were mainly made from mahogany imported from the West Indies. Solid oak and tiger oak tables were also popular. Occasionally, maple, cherry, and walnut were also used. These tables are not as valuable as those made from mahogany or oak.

As mentioned above, when the clawfoot design gained popularity in the United States, the local craftsmen adapted the design to suit the local tastes. Below, we have listed the different styles used by table makers in different regions.

Massachusetts was one of the main regions where American clawfoot tables were made. The furniture makers from Massachusetts favored a crisply carved ball and claw feet. In these designs, you could see the talons in a triangle formation if you viewed the foot from the side.

They were able to achieve this effect by turning the side talon back sharply so that it formed an angle with the center claw.

In clawfoot antique tables from New York, the ball has a less round shape. It is almost like the ball has been squashed into a squarish shape by the power of the eagle’s talons. In the New York clawfoot, the eagle’s claws are close together.

The clawfoot tables from Philadelphia use a more rounded shape than the New York version. These tables can also be identified from their finely detailed talons.

The antique clawfoot tables from Rhode Island have an oval-shaped ball. Another distinctive feature of this local variation is that the eagle’s talons are slightly undercut.

Probably the least attractive name possible for a table, the hairy paw foot is another American Chippendale variation. This one is not linked to any particular region. These antique tables have a hairy paw foot designed to look like an animal’s paw with claws. A variation of this is often found on American Empire-style tables.

Expert appraisers of antique furniture will often refer to the era of Queen Anne of England. Queen Anne reigned from 1702 to 1714, but the style remained popular until the 1750s in Europe and until the turn of the century in the United States.

Furniture designers from the period moved away from the heavy, lavishly embellished designs popular during her father, King William III’s, reign. They preferred furniture that was elegant, more versatile and lighter so it could be easily moved around a room.

Furniture from the design era typically features some form of an “S-curve”. Examples of these include the subtle swoop of chair backs and the gentle curve of the cabriole legs. They often had pad feet, which was a rounded disk at the bottom of the foot. In clawfoot tables, these pads were secret under the ball and claw design.

During the era, versatility was the key and the ball and claw feet design became popular in a range of table styles, including dining table, tea table, coffee table, card table, leaves table and side table.

The Clawfoot Tables from the 1800s

In the late 18th and early 19th centuries, furniture designs began to reflect neoclassical styles. In table designs, especially in American Empire style tables, this was reflected in the change of leg styles. Tables moved away from the finely curved legs and often had flared legs with clawed feet at the end.

How to spot an original antique clawfoot table?

Over the years, there have been many reproductions of clawfoot tables, so it is important to know how to identify a genuine antique table.

Love to Know website advises potential buyers to look out for imperfections in carvings, old hardware and construction, the style of finish and wear and smell. The website also lists signs that point to reproduction such as modern materials, symmetrical construction and smell.

To read the advice in more detail, click the above link for the Love to Know website.

How to clean your clawfoot antique table?

If you have an antique table, you want to keep it in great condition. However, you must be careful not to clean it with chemicals that might damage the surface. Here are a couple of different ways to clean your clawfoot table without damaging it.

One way to clean your table is to mix four parts of white spirit with one part of boiled linseed oil. Use a clean linen cloth to rub the mixture in the direction of the grain. If the table top is really mucky, you can try fine fire wool with the solution, but make sure to test it first in a small discreet area.

Once the table is clean, give it a final wipe with white spirit on a clean cloth, applying it in the direction of the grain again. Once the surface is dry, give it a good wax. If you use a colored wax, it will also hide some old dents.

For full details on how to look after your antique claw foot table, we recommend the Antiques World website. On their site, they have a plethora of useful information, including how to apply wax correctly, how to remove ink stains and candle wax and how to restore holes and cracks in wooden antique furniture.

Especially, if you are thinking of selling your antique table, you will want to use their tips to get your table looking its best. Sellers with the best condition tables always attract the best buyers.

You can use the list of styles to help you identify different clawfoot tables. We’d also like to share one final tip with you, which might help you to double-check the style of your table. That is using the Google lens.

You can take a picture of the feet and then use the Google lens to search for similar images on the internet. This can be a really handy tool if you are not a hundred percent sure of the style. If you have questions about antique claw tables, write them in the comments section.