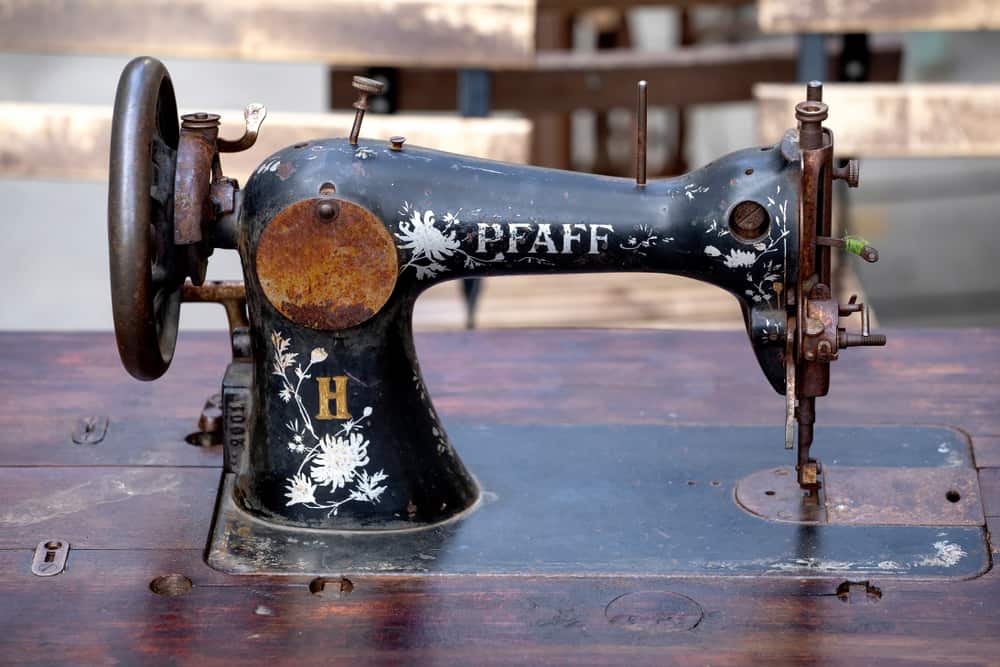 Old Pfaff sewing machines are popular with collectors and the most popular models in good working condition can resell for hundreds of dollars. Keep reading to learn more about the history, models and value of vintage Pfaffs.

The story of Pfaff began in 1862, Germany, when Georg Pfaff made his first sewing machine. You can see it if you visit the Munich Museum of Science and Technology. The following year, he launched his sewing machine business and by 1872, the company sold more than 1,000 sewing machines.

The durable machines proved popular with the consumers and by the early 1900s, the company exported sewing machines to 64 countries. Pfaff increased production year on year and in 1910 had sold over a million sewing machines and established itself as a leader in the industry.

Before taking over the running of the company, Georg Michael Pfaff, Georg Pfaff’s son, spent two years in the US studying manufacturing plants and tools factories. Using machines and tools he bought in the US, he modernized the Pfaff factory and moved from manual production to steam-driven drilling, milling and planing machines.

The Pfaff factory was destroyed during the Second World War, but rebuilt after the war and they have continued to make high-quality sewing machines. From its early days to the present, the company has been renowned for its innovation and durable machines that can sew denim and other heavy materials.

The company stayed in the family until the 1960s when it went public. Pfaff went into financial difficulties in the 1990s and in 1999 was bought by Husqvarna Viking who also owns Singer. Today Pfaff’s shares are owned by SGSB Group Co. Ltd.

History of Caring for Their Staff

Pfaff was also a notable company for the way it treated its staff. In the 1800s, workers had very few rights, but Pfaff saw the importance of looking after his staff. The company offered its staff assistance with housing and sick leave, which at the time was revolutionary.

Pfaff also established a fund for the surviving dependents of deceased workers. By looking after his staff, Pfaff ensured their loyalty and created a workforce that was hard-working and efficient in producing high-quality, reliable sewing machines.

When Pfaff first started to sell sewing machines, they were identified with letters. However, by the 1800s Pfaff moved to use numbers. Below we have listed some of the most famous Pfaff models.

This model was in production through the 1920s. Originally, this model was called Model K, and it came as a hand crank or a treadle model with a vibrating shuttle. It has elaborate golden decals like most Pfaff models from the early years and a decorative treadle.

The Pfaff 130 came into production in 1932 and it allowed the user to create a zigzag stitch. It was a durable sewing machine that could sew heavy fabrics. This model remained in production for decades because of its popularity.

Pfaff released both the 230 and the 230 Automatic sewing machines in the mid-1950s. The Pfaff 230 first and then the Automatic slightly later. It has a forward-facing rotary hook and feed dogs that are extra wide.

A very popular choice in the 1960s. Pfaff 260 was an easy-to-use electric sewing machine that had 80 automatic stitches, hence the nickname Dial-a-Stitch. It could sew through eight layers of denim and come with a 10-year warranty.

The Pfaff 260 had a more modern shape because the motor was internal rather than mounted with a belt-like on the older sewing machines.

This model launched in the late 1960s and remained in production well into the 1980s. The model integrated dual feed technology, which meant it could feed through both the top and bottom layers of material at the same time.

Pfaff started to develop this model already in 1979, but it wasn’t introduced to consumers until 1983. This model was revolutionary since it was fully programmable and allowed users to program their own patterns in a simple way.

This model was released in 1988 and was the first Pfaff sewing machine that could do 9 mm wide stitches. It also had a feature that allowed the sewer to create and copy stitches using an add-on unit called the creative designer, which was unique to Pfaff. It was also the first machine with maxi stitches up to 40 mm wide.

The 7500 series were released in the 1990s. They were Pfaff’s first hoop-style embroidery machines and the later models in the series also had multi-directional feed capacity following the invention of stepping motors that moved the feed dogs in different directions.

Pfaff has, of course, brought many new models to market since the 1990s, but as our focus is on vintage models, we have not listed them here. If you would like to see the sewing machines Pfaff has developed since then, you can find them here.

How old is my Pfaff sewing machine?

Knowing the model number of your Pfaff sewing machine will help you approximate the time it was made. However, to pinpoint the exact year, you will need to know its serial number. Older models usually have the number stamped into the metal of the machine. Look for it near the handwheel or on the bottom of the machine.

Newer models might have this number printed on a metallic sticker. Once you have located the serial number, you will be able to find the year it was produced. The Pfaff website does not list the serial numbers with their corresponding years.

However, you can find a list of the serial numbers with the corresponding years all the way from 1862 to 1975 on the International Sewing Machine Collectors’ Society website.

How long does a PFAFF sewing machine last?

Since Pfaff produced its first sewing machine, the brand has had a reputation for durability. If you were to buy a new machine today, it will come with a five, ten or even twenty years’ warranty. But what about older models?

The old mechanical models were built to last and you can still find vintage Pfaffs in perfect working order. The reasons behind their longevity are precisely fitted parts and the power behind the machines. You can see a demonstration of a vintage Pfaff 130 in use here.

How much is my old Pfaff sewing machine worth?

For example, a Pfaff 130 in good condition can be worth around $400 or more if it comes in its original cabinet. Here are some more examples of what old Pfaff sewing machines can be worth. Please note different currencies depending on which eBay, Etsy or Gumtree sites the machines are advertised on. 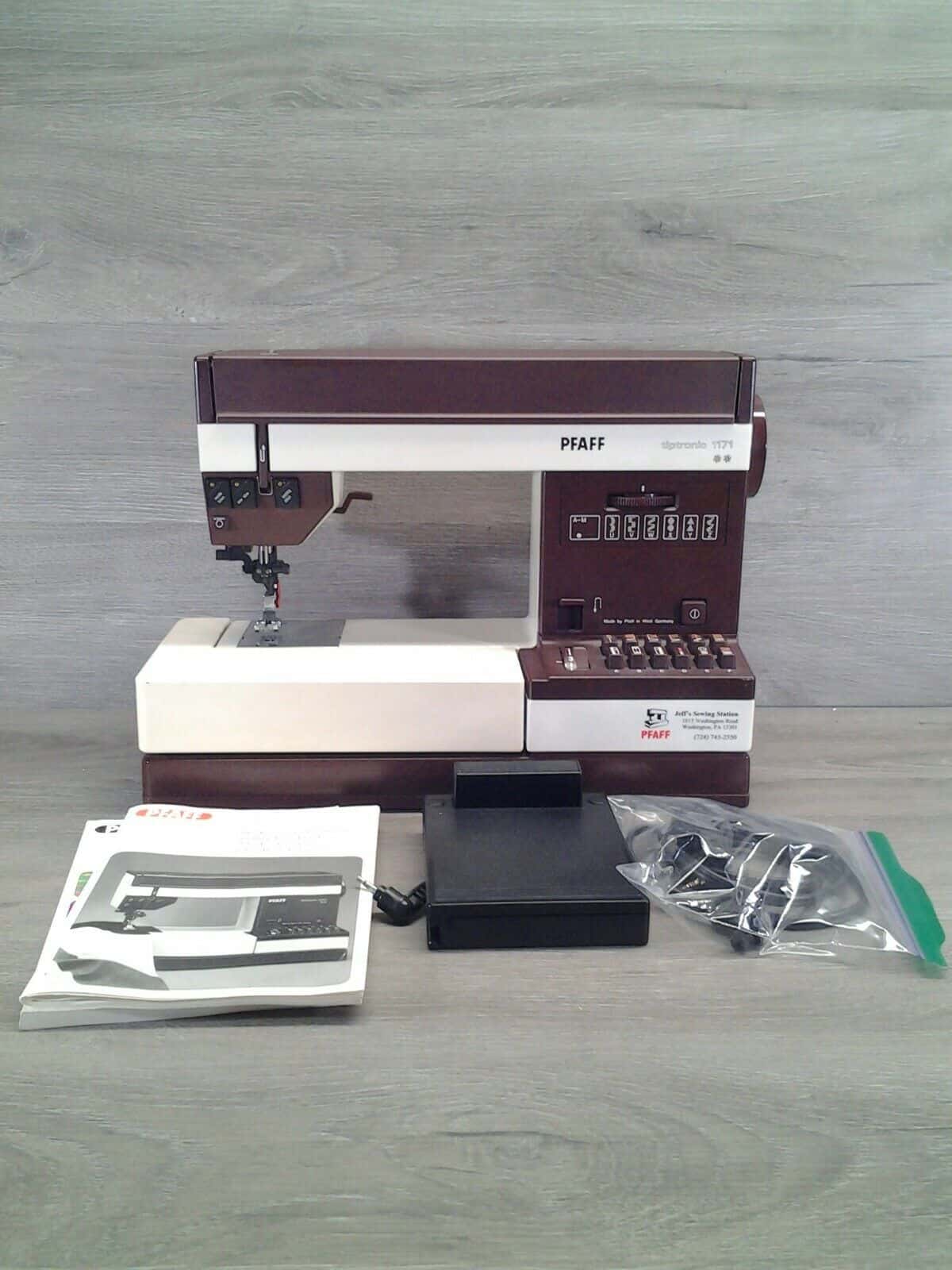 This is currently the highest-priced vintage Pfaff on eBay at $495.00. However, we have seen these sewing machines from the 80s go for double the price. The Tiptronic 1171 is one of Pfaff’s most popular models. It is dependable and reviewers generally state they have used the machines for years and years. 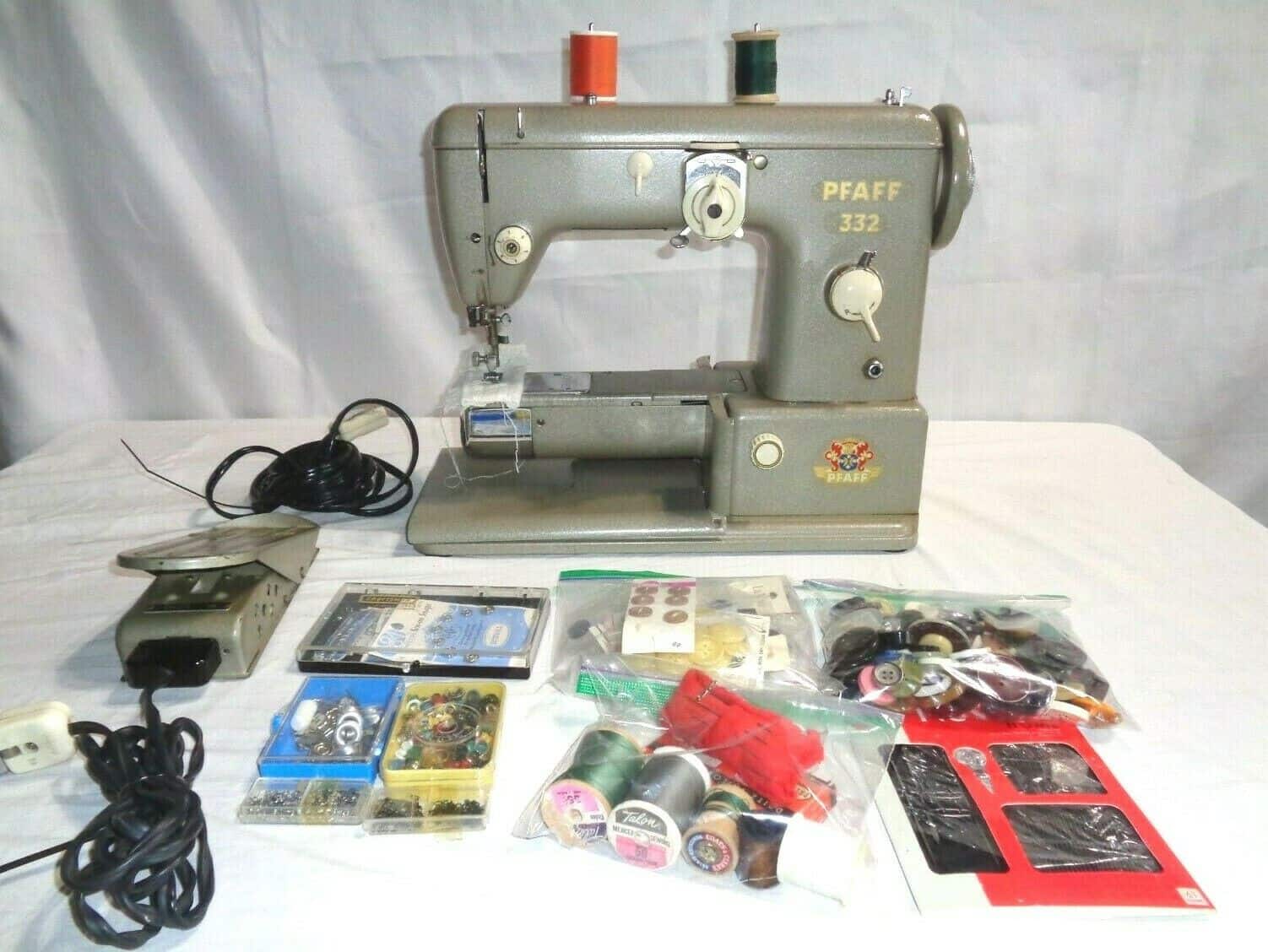 This 1957 vintage Pfaff is currently for sale on eBay for $399.95. It comes with several accessories and is in working condition. This sewing machine can stitch both lightweight and heavy fabrics equally well and does zigzag, reverse and a range of decorative stitches. This is a vintage sewing machine from the 1950s and is selling on Etsy for 578 euros. It is suitable for sewing most fabrics, including heavy ones like denim. This is definitely an ideal collector’s item, especially as it is still in good working order. This is another vintage machine from the 1950s. It is a vintage hand-crank sewing machine with beautiful decorative details. This one on sale on Etsy still works, but even if you had no intention of using it, the decorative details make it a great ornament. The Etsy sale price for this Pfaff 50 is 547 euros. 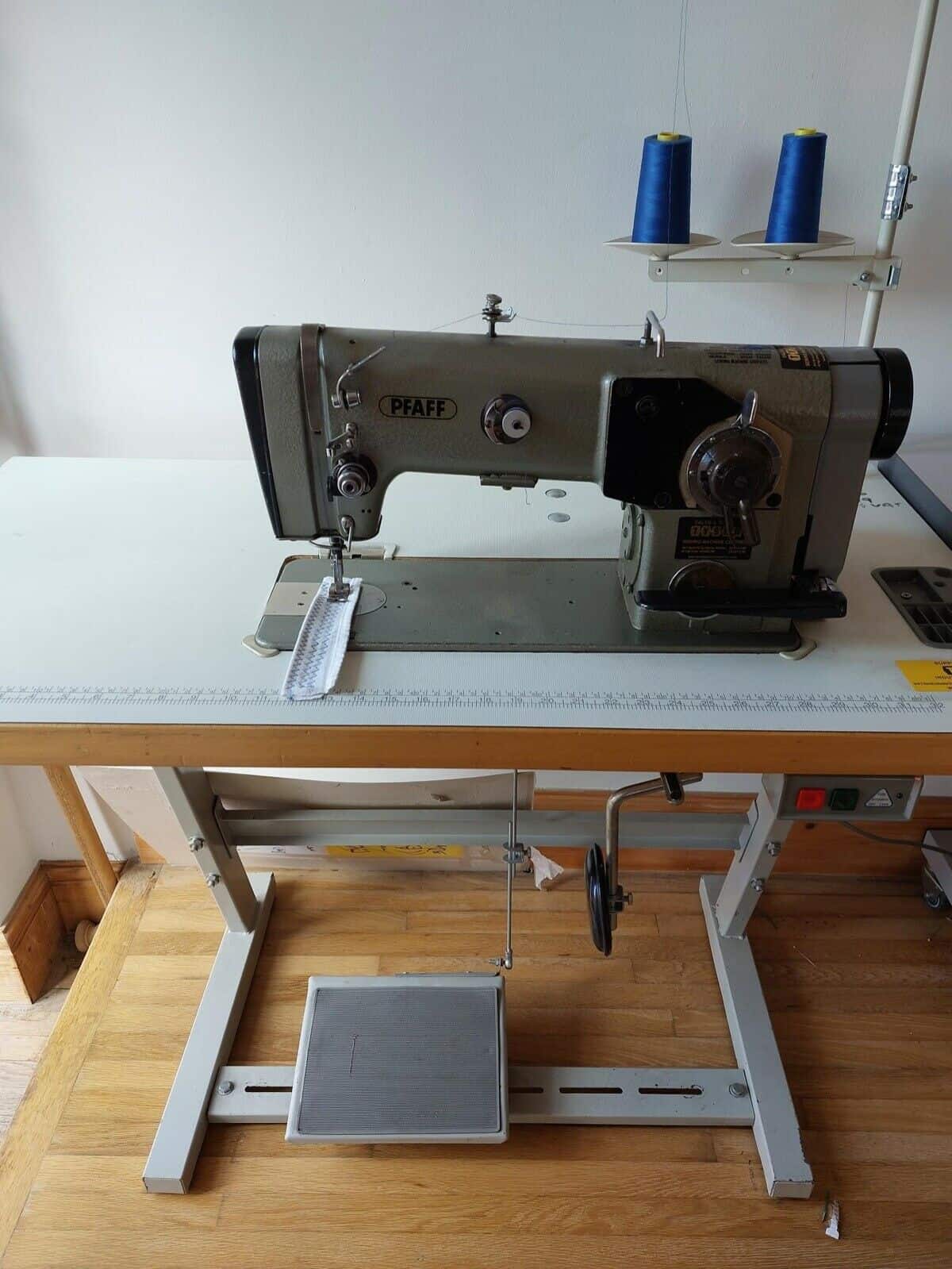 This is a heavy-duty industrial sewing machine, and it is currently selling on eBay for £550. It comes complete with head, motor, wheel stand, table and cotton stand and is perfect for sewing thick fabrics including leather, vinyl and denim. This vintage Pfaff is on sale for 800 Australian dollars on the Australian Gumtree. It has an adjustable stitch length and a built-in reversing lever. It comes with its original table, which adds to its value

How to sell and buy a vintage Pfaff sewing machine?

In fact, it can be challenging to find online listings of old Pfaff sewing machines outside the two. However, we managed to find one sewing machine on sale on Gumtree Australia. It was also the only model we found with its original table.

Outside the online marketplaces, you can try auctions, antique shops and second-hand shops whether buying or selling. Remember, though, that you are unlikely to get the best price if selling to an antique or a second-hand shop, since they need to make a profit on the sewing machine themselves. And to buy, try garage and house clearing sales, too.

If you are shopping for a specific vintage model and cannot find what you are looking for either online or in brick-and-mortar shops, you can try discussion forums that focus on old and vintage sewing machines.

One example of such a forum is on Pattern Review. There are different discussion threads, but the first one you might want to try is this: PFAFF PFANS – LOVERS OF PFANTASTIC PFAFFS.

Although there are many other sewing machine brands that have also stood the test of time, it is rare to find vintage and antique models that still work as well as Pfaffs models from decades ago.

If you are looking for an old Pfaff sewing machine, you can still use and that has modern features such as an in-built motor and a range of automatic stitches, then anything from the 1960s would work. You will get a sewing machine that is reliable and likely save some money, too compared to buying a new Pfaff.

However, if you are looking for decorative models, then the older models would be better suited. The 1950s models such as the Pfaff 31 and Pfaff 50 still have beautifully decorative details.

Should you have any questions about old Pfaff sewing machines, leave your questions in the comments section.