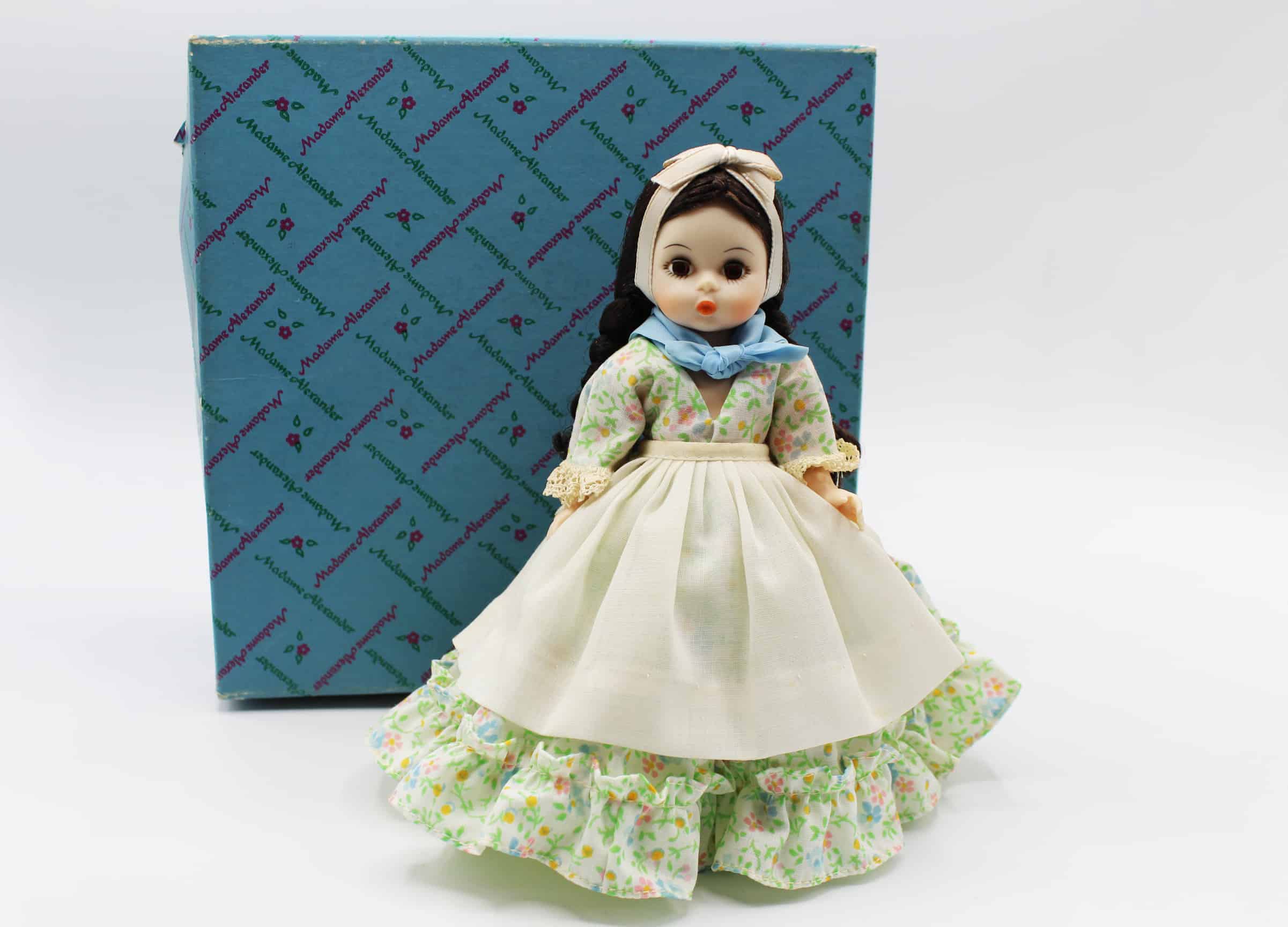 Who is Madame Alexander and what do we know about her company?

Madame Alexander’s dolls was founded in 1923 by Beatrice Alexander in New York City. The company opened up with its first licensed character – a Scarlett O’Hara doll from Gone with the Wind. From there, Alexander went on to create many other dolls modeled after real people, including a set of 36 dolls of Queen Elizabeth, the Dionne quintuplets, and many others.

Post World War II, during the 1940s and 1950s, came the first fashion dolls too, mass-produced with special face molds. Such examples include the vinyl baby doll, the Cissy, the Pussycat, the Alexandra Fairchild Ford collection, and others.

Going into the 1980s and beyond, as any American historian can recall, Madame Alexander’s future dolls included other popular models such as the characters of Little Women, a full Wizard of Oz collection, and many more. Even McDonald’s had Happy Meals collaboration with Madame Alexander’s dolls.

Do Madame Alexander dolls have any value?

Say you’ve found an old Madame Alexander doll in your grandparent’s garage – did you just hit the jackpot or are those just low values toys you can sell for a buck at the flea market?

The answer is that it depends on the doll. Some models can be a literal goldmine each going by full market value and appraisals given by most collectors. Others can only earn you a single figure if they are of a more common product line and haven’t been kept in good condition anyway.

Like all other antiques, the values of Madame Alexander dolls are very much dependent on the condition they are in as well as their rarity. So, even if you’ve stumbled upon a rare doll that’s from a limited line of just 20-30 dolls, if it’s so damaged that it’s barely recognizable, you won’t be able to get much money for it.

There are quite a few sites you can use as a Madame Alexander dolls database today. Most collectors will typically relate you to sites such as the Doll Edition, Shop For Dolls, and others, including the Madame Alexander site itself.

Using such catalogs is crucial to determining each doll’s age and product line as those are two of the most important factors for a doll’s value. For example, here are some of the quite valuable Madame Alexander dolls sold recently:

4. A few much less valuable dolls

You can use such catalogs to gauge the rarity, original price, age, and popularity of every doll among other factors. First, you’ll need to identify your own doll’s model, however.

What determined the value of a Madame Alexander doll?

As with any other such antique item, there are a few key factors at play:

So, how can you estimate your doll’s model and value? Depending on its condition, you may be aware of the doll’s size and rough look. If the doll is in so bad a shape that you can’t figure out anything else, it probably won’t be worth much on the market, unfortunately. Still, there are plenty of identification guides you can check out for details and we’ll give you a quick step-by-step here as well:

The first step is to look for any manufacturer markings. Many of Madame Alexander’s dolls are marked with either “Alex” or “Mme Alexander” at the nape of the neck. Some models don’t have such marks, however, while others have them but on different parts of the doll’s body such as the scalp, the back, the soles of the feet, and others. Finding such a mark, if there is one, is crucial as there are many look-alike dolls made by other manufacturers. So, it’s good to find their marking too if there are any.

If there are no markings on the doll’s body, check out its clothes. Clothing labels can also carry the markings of either Madame Alexander or another brand.

Look around for the doll’s original packaging. Unfortunately, many people throw away the packaging as they don’t realize how useful it is for identifying the doll later on. If you can find the packaging, however, it should be enough to tell you everything you need to know about the doll.

does it look like a particular real-life or fictional person? Many of Madame Alexander’s dolls resembled certain people so that can be a good way to figure out the doll’s relative age.

What materials was the doll made out of? Early dolls in the 1920s were mostly made with felt and other fabrics. A plaster-and-sawdust composition material was widely used in the 1930s and 1940s. In the 1950s, the company switched almost exclusively to plastic. So, if the doll isn’t made from plastic, it might be truly old and extra valuable.

If none of these steps have worked, you can always take a few good pictures of the doll and post them online on collectors’ forums. Chances are that you’ll be showered with differing opinions so don’t jump the gun and go to the first collector who offers you a half-decent price.

Additionally, you can also get in touch with the original manufacturer as well. Madame Alexander is not only still in business but they offer help in identifying their long-lost treasures. They also have a “doll hospital” in New York City which you can visit if/when you’re nearby.

How to keep a Madame Alexander doll in the best possible condition?

If you just found your Madame Alexander’s in the attic, chances are that it’s looking rough. You may be tempted to clean it yourself but some experts warn this might be a bad idea. Gently dusting it off is one thing but anything more substantial may damage the doll irreparably.

So, the better solution is to seek professional repair. There are many doll hospitals out there that know how to handle old dolls and fabrics without damaging them. So, you should at least call one of them first before you do anything major.

In the meantime, if you want to store your doll, avoid air-tight containers as those tend to trap the moisture in with the doll. Instead, you can use archival tissue paper as a wrapping material. This can seem clumsy and insufficient enough but the goal here is to only protect the doll from more damage while you go to the doll hospital.

Where to sell and buy Madame Alexander dolls?

Vintage Madame Alexander dolls can be sold in many ways. An auction dealer, doll collectors, online sites such as Etsy and eBay, and even a simple forum or a social media group can lead you to the right seller. Or you can just go to your local flea market if you’re certain that the doll isn’t all that valuable.

Whichever route you choose, however, we’d advise against making a sale too quickly. Especially if you have an older model, you’ll probably be showered with different opinions and offers online, so it’s best to take your time selling the doll.

Alternatively, any of the leading auction house sellers out there specialize in making sales quickly and getting the highest possible price. This can be a good route for anyone looking to save time while getting guaranteed value. The issue with auction houses, however, is that they also take a steep cut off of every sale – so, make sure that you read the fine print and you know what the house’s cut is going to be.

Antique dolls can become very valuable over time and Madame Alexander’s dolls are a prime example of that. If you have such a doll leftover from your parents or grandparents, chances are that its age alone will have bumped up its price to a pretty significant degree. Add the possibility of it coming from a limited series and, if it’s preserved in a good condition, it can be worth a small fortune – usually in the hundreds but often even in the thousands of dollars and above.