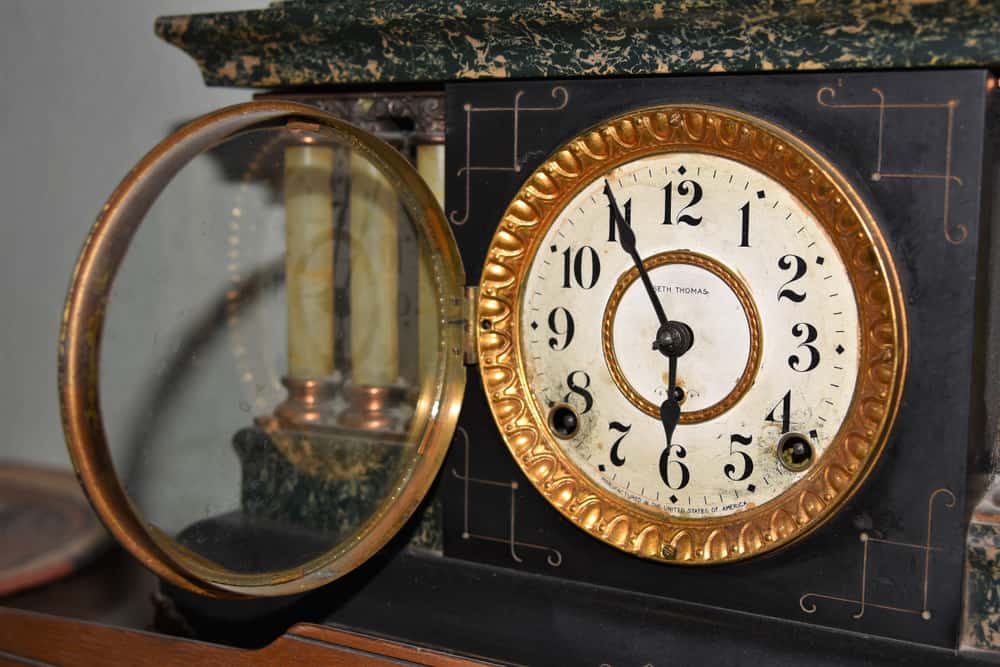 Have you ever heard of Seth Thomas? If not, have you ever seen the Grand Central Terminal Clock in New York? This beautiful 4-sided clock is estimated to be worth up to 20 million dollars. And yes, it was designed by Seth Thomas himself.

Now that you understand just how important the Seth Thomas name is, you might be wondering if all of the clocks made by this company are equally valuable. Perhaps you or your family still have such an old clock from past generations.

Well, while you should not expect any of your clocks to be worth 20 million dollars, you might still be able to make a nice sum off of selling one, if you’re so inclined.

So, if you want to learn more about Seth Thomas clocks, how to identify them, as well as how much they are worth, we have collected all of that information in this article!

The History of the Seth Thomas Company

As you might expect, the history of the Seth Thomas Clock Company starts with Seth Thomas himself. Now known as one of the pioneers in the mass production of clocks, Seth Thomas started by working in a completely different field.

At first, as a carpenter/joiner apprentice, Thomas’ work consisted of building houses and barns. However, when the clockmaker Eli Terry noticed his woodworking skills, he hired him to join his clock-making business (in 1807).

Fast-forward a few years, after producing thousands of clocks, Thomas had sold his interest to his business partner; he then opened his own clock factory (in 1813), purchased the rights to manufacture Terry’s shelf clock, and even built his own mill.

That was the beginning of one of the most important clock companies in the United States, the Seth Thomas Clock Company (officially incorporated in 1853).

In fact, the name Seth Thomas was so important that a section of Plymouth Hollow, Connecticut, was turned into a different town named after him: Thomaston, CT.

After a troubled history, of merging with, and being acquired by different companies (General Time, Colibri Group, etc.), Seth Thomas clocks are not being made anymore. So, if you still happen to have one, you can expect it to be rather valuable.

What are the Three Holes on a Seth Thomas Clock?

One question you might have, as the owner of a Seth Thomas clock, is regarding the three holes that you can find on the clock. Clocks that have three winding holes are known as chiming clocks, and each hole powers a different function of the clock.

You can use your winding key to wind each of these holes. The center hole powers the time train, which makes the clock keep time. The hole to the left powers the strike, which happens at the top of the hour.

Lastly, the hole to the right powers the chime, which makes a musical tone every 15 minutes. If you want to hear all these sounds, simply wind the holes until the key will not wind any further. If the key doesn’t turn at all, you are winding in the wrong direction.

How do I Identify a Seth Thomas Old Mantel Clock?

Mantel clocks – whose name comes from the fact that they typically sit on a mantel above the fireplace – were one of the most popular types of clocks made by the company. Hence, it’s also the type you are most likely to have.

Now that you are familiar with the history of these clocks, It’s time to learn how to identify whether you have one, and how old it is. You will need to pay attention to a few factors for this:

The first thing you need to do to check if you have a genuine Seth Thomas clock is to look for a label. Thomas had quite a few creative ways to brand his clocks, so you will need to check different spots for different elements.

Most likely, you will find a full paper label (or remains of a label). This is something that you can find either on the back, inside, or bottom of the clock case. If you do find one, you can check this website to compare it to every recorded label.

If you haven’t found a paper label, another option would be to look closely at the pendulum inside the clock. Sometimes, Thomas etched his name onto the pendulum.

Alternatively, take a closer look at the clock face as well. Some of the clocks Thomas built had his name on them, right above the number 6 on the dial. To be specific, you might find this on clocks built between 1881-1888, or from 1913 onward.

If you haven’t had any luck yet, try to look for a metal plate. This could be on the bottom of the clock, or otherwise somewhere inside of it. The plate should have a Seth Thomas label etching, and possibly a patent number.

Now that you have hopefully found a label, and have a good reason to believe you own a Seth Thomas clock, the next step would be to check its construction, which can help you narrow down its age, as well as further confirm it is a real Thomas clock.

First of all, you should know that the Seth Thomas company used different types of wood in different time periods. At first, they mainly used walnut veneer, so this type of wood could be a good indication that you have an earlier clock.

From 1888 onward, they started using both cherry and oak wood in addition to walnut. However, from 1913 onward, they mostly used mahogany and oak.

One other important element of the clock’s construction is the type of movement it uses. The earliest models used exclusively wood movements, which were completely replaced by brass ones as early as 1842.

Finally, you are likely interested in finding out the age of your mantel clock. Fortunately, this should be a rather easy process, as many Seth Thomas clocks happen to feature date stamps on the bottom of the clock.

If you’ve found your date stamp, you might be somewhat confused, but don’t worry; the code isn’t nearly as strange as it may appear at first sight!

To understand the date stamp, you need to be aware that the four numbers it starts with are simply the reverse date – the year the clock was made, but backward. So, for example, a code that starts in 5481 indicates that the clock was made in 1845.

What is the value of a Seth Thomas mantel clock?

As you probably know by now, the Seth Thomas Clock Company made clocks for a long time, of different shapes and sizes. Naturally, not all of them have the same value either. If you are interested in selling your clock, you need to consider the following:

We have previously described the different methods you can use to determine your clock’s date. To reiterate, the most straightforward one would be the date stamp. If you can’t find one, you might also be able to tell from the paper label or construction.

If you think you have found the right date for your clock, you now need to understand how that could correlate to its value. Simply put, the earliest clocks tend to be more valuable, compared to the ones made later on.

To be more specific, it would be the clocks that were actually made by Seth Thomas himself that are actually worth the most. For reference, he died in 1859, so it would be ideal if your clock were older than that.

The most important factor other than the date is the condition of the clock. As is the case with most antiques; the better its condition, the more valuable it tends to be considered. So, a well-maintained Thomas clock will yield the highest profit!

There are a few elements that you can take into consideration to determine whether your clock’s condition can be considered good or not.

First of all, there is the function of the clock. Does it still keep time properly? Does it strike and chime as it is supposed to when you wind it as we explained earlier? If the answer is yes, then your clock is likely going to be worth more.

If, however, it doesn’t quite function as well as it used to anymore, there is still something you can do about it! You have the option of taking it to a clock restorer, who could repair it with antique clock parts.

After the function of the clock, you need to look at the condition of the wood. Has it been cracked, crazed, or just poorly restored and damaged in the process? Unfortunately, this may have a negative impact on the value of your clock.

Next, you have the clock face condition. A bright, readable clock face is a good sign; it means your clock is going to be worth more. However, one that shows signs of rough use is not nearly as good of a sign.

Lastly, there is the glass condition. Perhaps it is cracked, or chipped, from continued use? If so, this would detract from the clock’s worth. If your glass is still in good condition, though, you can consider yourself lucky!

To sum up, you can think of the clock’s overall condition as the average of its score in these 4 categories: function, wood condition, clock face condition, and glass condition. If your clock is in excellent condition, it might be worth a lot!

What are the Most Valuable Seth Thomas Antique Clocks? (Price Guide)

Following a thorough appraisal, Seth Thomas clocks can be sold on various platforms, from eBay to auction websites (or even in physical auctions). Usually, clock collectors are the ones looking for such antiques.

According to Cottone Auctions, the most valuable Seth Thomas clock sold for $20,160, at a 2021 auction. This was an office calendar, whose creation date was noted as ‘circa 1900’. Quite a bit later than other clocks, but it had other things going for it.

Specifically, this clock had a walnut case, burl walnut accents, and a pagoda top, which are reminiscent of the older clocks. Moreover, it still had the original metal dials, directions, label, and even the engraved pendulum mentioned above.

The second most expensive Seth Thomas clock ($17,250) was a shelf violin clock. Clearly, its main selling point would be its aesthetical value. The violin shape is a unique and impressive design that will surely draw the attention of any bystanders.

Beyond that, it also happens to be a rather early design, created in September 1885 (according to the date stamp). It also has many of its original elements, including the original glass, signed dial, and a clean label.

The Seth Thomas clock that sold for the third-highest price (of $17,110) is a tall regulator wall clock, dated around 1900. This clock was sold in an outstanding original condition, and its case was constructed from walnut wood.

Finally, to highlight some mantel clocks, the two most valuable clocks are both Pillar & Scroll mahogany case clocks that sold for $4,600 and $3,000 respectively. Both of them were in mostly original condition, presenting impressive nostalgic elements.

Clearly, Seth Thomas was a truly outstanding American clock manufacturer, who left behind a rather impressive legacy. If you happen to be the owner of one of his early clocks, you know you’ve got a valuable piece of history on your hands.

We hope this article helped you better understand the history, value, and method of identifying and dating your clock. If you have any other questions or remarks, feel free to comment below!