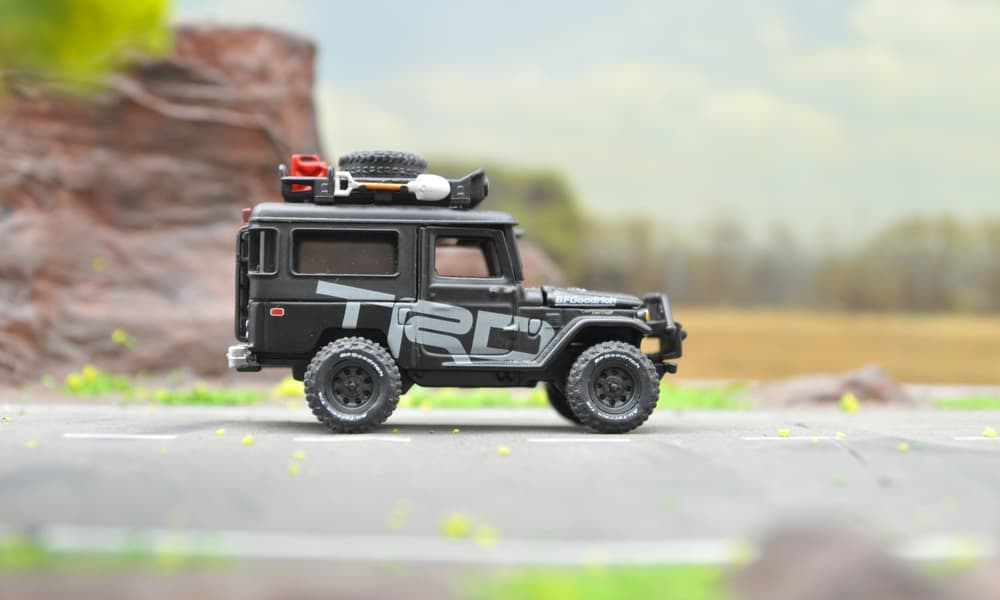 So, you’ve wanted to get your hands on a Johny Lightning car for a while? Or, are you seeking information on all their valuable models to complete your collection?

Either way, you’re definitely curious to understand the history, prices, and the market availability of different precious JL cars, aren’t you? Well, you’re at the right place!

Here are 17 Johny Lightning car models to charm up your showcase. Let’s get started! 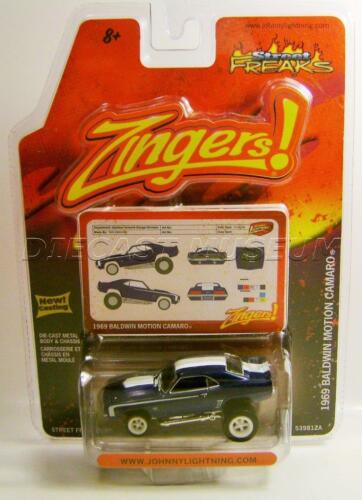 Chevy Baldwin Camaro SS is one of the rarest and most desirable White Lightning Zingers of the Johnny lightning series. This model is perfect for collectors and enthusiasts who would add extravagance to their collection.

If you are interested in buying this model for your collection, please note the white wheels on the model, which signifies the White Lightning edition. Moreover, the front wheels should be loose.

This model is as rare as it gets. Therefore, it should fetch you more than $2000 up to $2500 if the package is in mint condition.

Released in January of 2007, the dukes of Hazzard by Johnny Lightning are among the most sought model car collections.

This model is considered a piece of history inspired by the television show “The Duke of Hazzard”. The car is modeled after the 1969 Dodge Charger “General Lee”.

1969 Dodge Charger signed by the cast of Duke of Hazzard in mint condition will cost you about $1800 in the market right now if you are interested in adding this model to your collection. 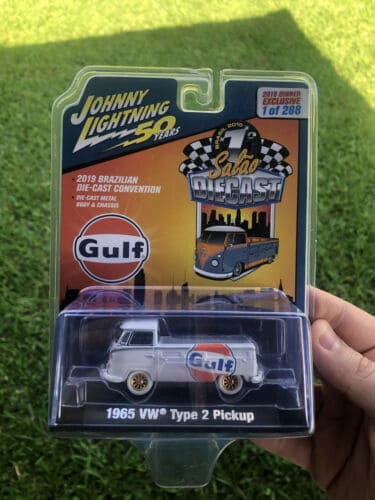 Johnny lightning released its commemoration of the 50th-anniversary model, 1965 Volkswagen type 2 Pickup, in August of the 2019 Brazilian Diecast Convention.

These are rich in details with rubber tires special wheels as well as gulf branding on the side of the truck. This truck is very special to collectors as it was sold at the 2019 São Paulo convention only and is sought by many collectors around the globe.

If you are planning to buy this pickup truck, please do note the number on top and the raw version art of the truck on the back of the package. The mint condition of standard Type 2 will cost you around $300-$400, and the white lightning will cost you about $800. 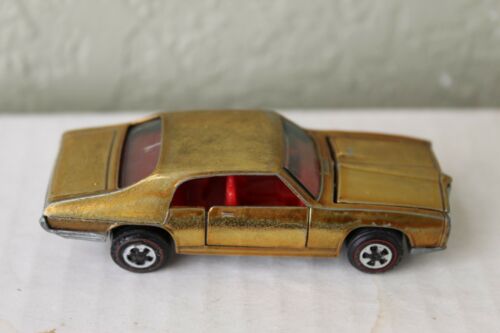 Released in 1969, this johnny Lightning model is one of the earliest models manufactured ever. This custom GTO comes with two major body variants with open and closed doors.

This particular model has a wide variety of colors, green, orange, red, and purple being the most common ones. In contrast, colors like fuchsia, gold, lime, and true pink are rare and considered collectibles among collectibles.

Since Custom GTO Topper is the most desirable among collectors, even the used models will command a high price in the market. The common color will fetch around $300-$400 dollars, whereas a rare color is valued at $500-$900. 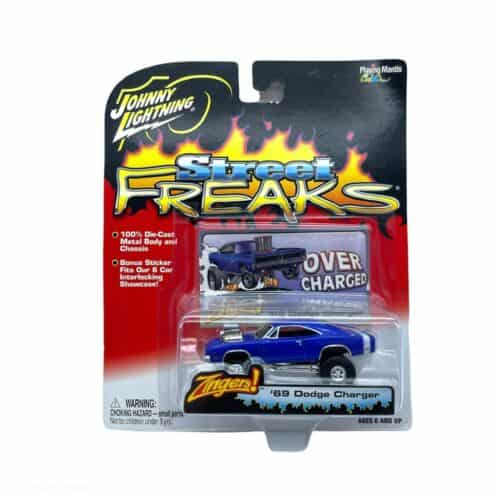 Produced in 2003, this model is inspired by the 1969 Dodge Daytona Charger and features rubber tires. Collectors seek this model as it is part of Johnny Lightning Street Freaks Release 1 and has 12 chargers in the complete collection.

There are two different versions of JL Street Freaks zingers dodge chargers: real car wheel and white lightning. The white lightning versions have a white chassis and engine, which makes them rarer than the real wheel versions.

Depending on the condition of the car and packaging, this model you cost you from $120-$400 in the market if you are looking to add this super rare model to your collection. As for the mint condition, though it is tough to find, it may cost you only a little above $500. 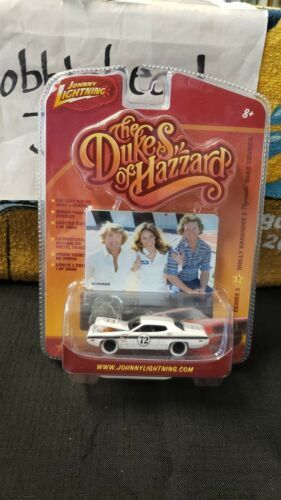 This gem of Johnny Lightning was released in 2007, inspired by “The Duke of Hazzard” series. This model first appeared in “Bird’s Gotta Fly” episode of the series and was first driven by Molly Hargrove.

The model is from Jonny Lightning Series R-3 and is considered rare among collectors. Ten thousand units of this car were produced in 2007 by Johnny Lightning, and there were 2 different modes available.

The normal version has a light yellow paint job with a black tire and interior, and the white lightning version has white paint on the body and chassis with white tires. If you collect Johnny Lightning, Dukes, or MOPAR, this is a great addition to your collection.

This model will cost you around $30-$60 for the normal version, while the white lightning version will cost you anywhere from $250-$400, depending on the condition of the model. 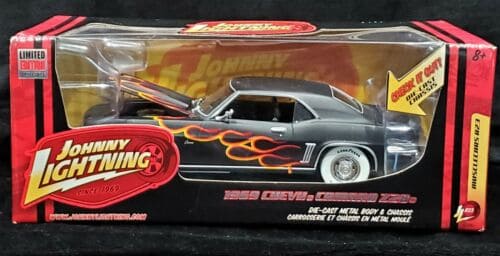 Milezone Company manufactured this particular model of Camaro in 2008, and only 250 units were produced. This specific flame series of Camaro is scarce as this is a handful of White lightning series with white chassis and wheels.

This Johny Lightning design was modeled after the 1969 Chevy Camaro muscle car. As per the market value, the fresh and mint condition model will fetch you around $100-$120. 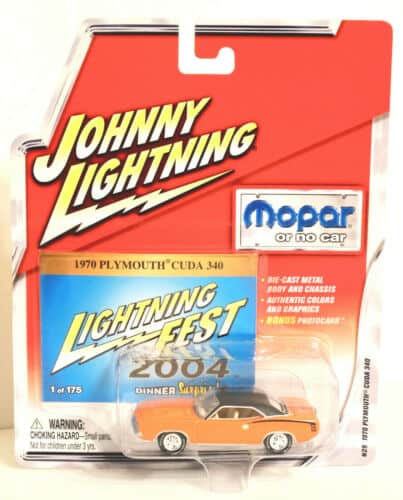 Released in 2004, this gem of a Johnny Lightning car is scarce and very sought-after. Modeled after the 1970 Plymouth Cuda 340, it was specially prepared for 175 JL 2004 feast dinner attendees.

If you’re planning to buy this model, make a note of the black hood as well as the orange body paint of the model. Considering the history behind this model, very few collectors own these, as they seldomly are up for sale. 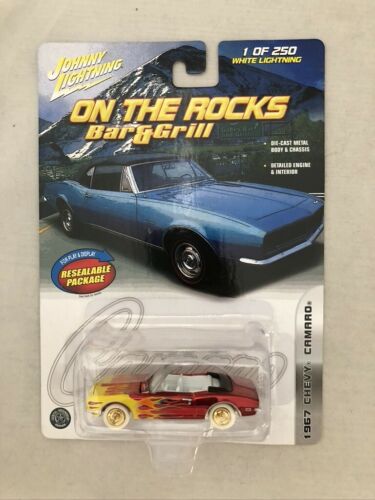 Modeled after the iconic 1967 Chevy Camaro, this is one of the rarest cars ever produced by Johnny Lightning.

Released more than a decade ago for “On the Rocks Bar & Grill,” this iconic masterpiece is 1 of 250 ever produced and 2500 nonwhite-lightning versions. There are two versions of this model Black Camaro and Dark Red Camaro.

If you are a fan of collecting Camaro, White Lightning, Convertibles, and Chevy, this model will be a great addition to your collection. Since these models are scarce, it’s rarely up for sale and can only be found in auctions. 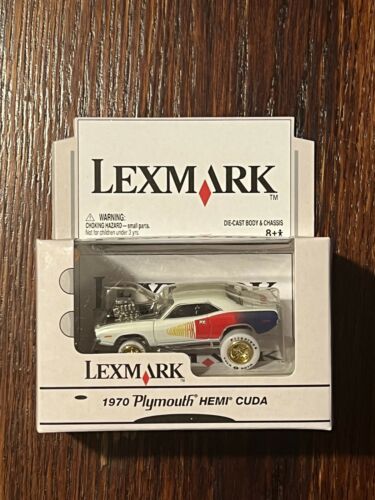 The Iconic 1970 Plymouth Hemi Cuda is the inspiration behind this model is an extremely rare promo done by Johnny Lightning for Lemark Corporation in the early 2000s.

This white lightning model has a white chassis and tire with Golden Wheelbase. This legendary diecast model is a great cross collectible, especially if you are a fan of JL Chase Models, MOPAR, and White Lightning. 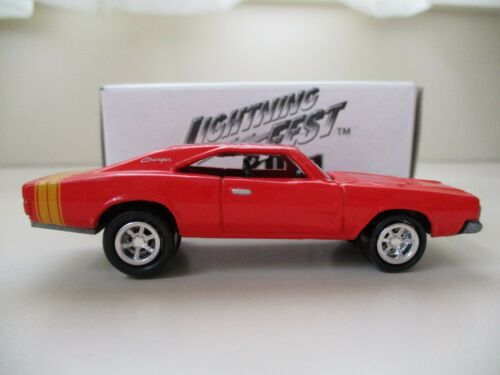 This iconic diecast model inspired by the “1968 Dodge Charger” was first produced in 2001. This iconic model was released as a promotional model for the JL dinner feast, and only 500 of these Lightning feasts were released.

With light orange body color and metal chassis, this car has a very low production run and has 1 of 500 written with the Lightning Feast logo on the hood of this model. 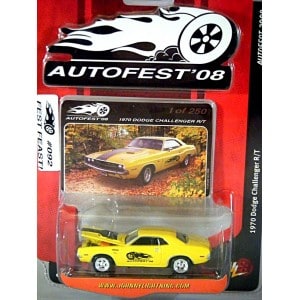 Released in 2008, this beautiful model is inspired by the iconic “1970 dodge challenger” and is considered one of the rarest model cars produced by JL.

250 attendees of the 2008 Johnny Lightning Autofest Dinner were provided with this beautiful model. Now you can assume how hard this model is to come by if you are looking to buy one.

This model is considered great Cross-collectable as it is rare and iconic, so if you are interested in modes like MOPAR, Challengers, or Muscle Cars, this will be a great addition to your collection. 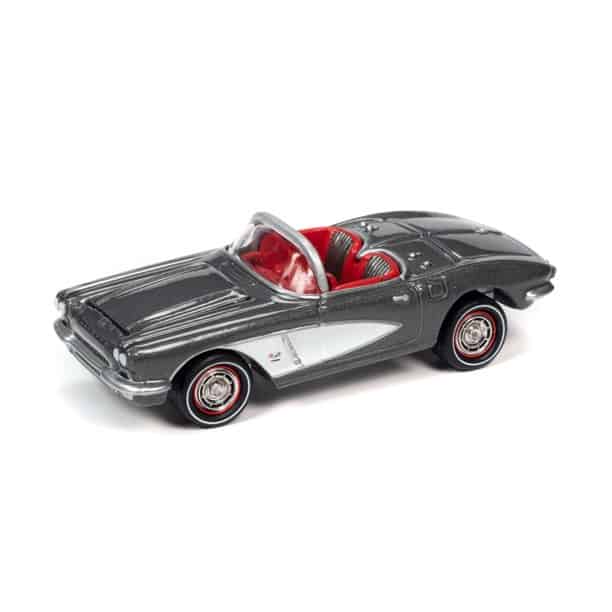 This iconic model is inspired by the 1962 Chevrolet Corvette and was released more than a decade ago by Johnny Lightning.

The extreme attention to detail on this model is what makes this model remarkable and is considered a must-have model for every collector. The true metallic silver color with features like rubber tires, detailed exterior, and opening hood provides its stunning appearance.

Any collector who is in love with Chevrolet, Corvette, and convertible should have this model in their collection. It’s a stunning addition to any convertible collection and ideal for Chevrolet enthusiasts. 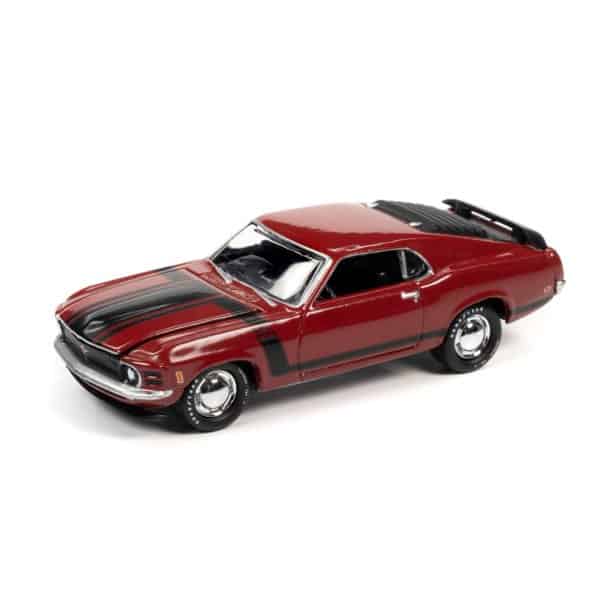 This classic and majestic diecast model is a replica of the world-class “1970 Ford Mustang Boss 302”, which is one of the very first models produced by Johnny Lightning.

This 1:64 diecast model is highly detailed and comes with factory “Apple Red” color, featured with actual rubber tires, detailed exterior, opening hood, and meal chassis and body. This model is considered very rare to find and also comes with a detailed interior.

If you are a real ford aficionado or love mustang and muscle cars in general, this gem is an outstanding collectible for your ardent ford buffs. 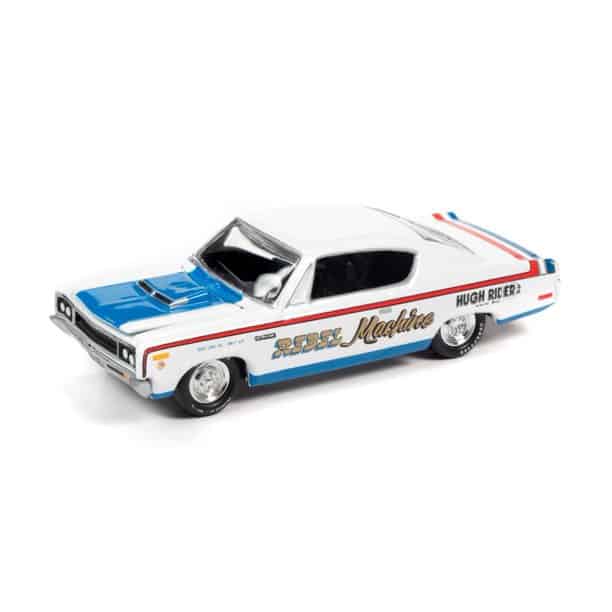 This 1:64 replica of AMC has very realistic detail; the frost-white colored car features actual rubber tires, a detailed exterior, diecast metal chassis & body, and an opening hood. This detailed muscle car is extremely rare as only 2384 of these limited-edition models were released.

If you are in love with AMC, muscle cars, or classic cars in general, this vibrant and timeless model will take your collection up a notch. 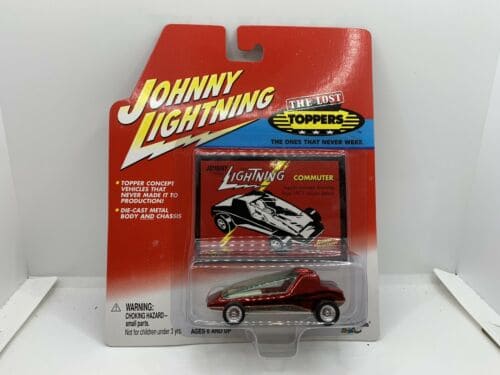 Released in 2001, this Johnny Lightning model may look a little out of place considering all the classic models produced by the company. This unique fantasy model may be a concept for an economical and lightweight city car, hence the name “Commuter”.

This model has steering wheels on both seats, which is quite unusual, the slender diecast body with open-wheel.

The streamlined and long canopy provides this model with notable all-around vision. The steering wheels are attached to two rectangular compartments, which may be a battery unit or electric motor of some sort.

If you are a fan of unique conceptual design, this model will be excellent for your JL collection! 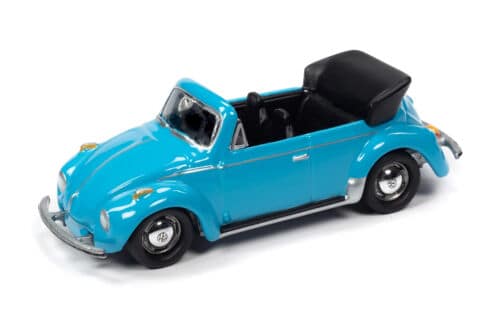 1975 Volkswagen Super Beetle is one of the Johnny Lightning VW series masterpieces. This Limited Edition diecast super beetle is super rare as only 4972 of the Ivory and Collector Tin were ever produced.

This model comes with actual rubber tires, an extremely detailed exterior, and an interior with collectible metal storage tin.

The nearly 3 inches long model is a great cross collectible. If you collect Volkswagen, beetles, or rare convertibles, this will be a brilliant addition to your collection.

We hope we could provide our fellow car enthusiasts with all the information they were seeking regarding Johny Lightning cars in this post. In a nutshell, almost all the JL cars are prized by car enthusiasts, and none of them are ‘cheap’.

However, these 17 are still the standouts in the series and definitely capture the greater attention of collectors. Which JL car are you eyeing next? Let us know!