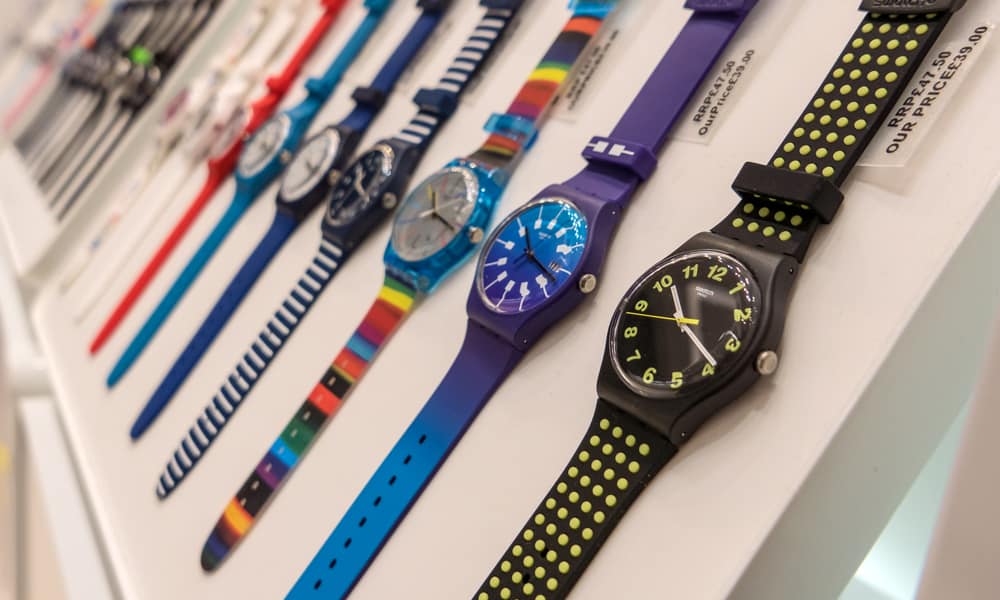 Swatch watches were first produced in the 1980s, with hundreds of different designs. They were originally intended to be affordable, even disposable. The name itself is an amalgamation of “second watch”.

These days, though, Swatch watches are very collectable. And they can command high prices. But which are valuable? And how much might they be worth?

That’s what we’re going to find out! Read on for our list of the 17 most valuable Swatch watches from 80’s to 90’s on the market.

Most Valuable Swatch Watches from 80’s – 90’s Worth Money

All Swatch watches have a model number as well as a name. Pago Pago is model GL400, and it was first produced as a limited-edition watch in 1986.

It had a green strap and a blue face with an abstract design reminiscent of the work of the artist Mondrian. (Swatch later produced a watch in collaboration with the Pompidou Museum called “Red, Blue and White”, directly based on Mondrian’s work.)

The value of this design is increasing quickly. We found this example on sale for $165. It had some condition issues and was sold without its box. Other dealers were asking as much as $880 – and that was for a watch without the original strap.

In 2018, the artist Damien Hirst collaborated with Swatch on a gentleman’s watch. It was produced to mark the 90th birthday of the Disney character Mickey Mouse. It was a limited-edition run of 19,999.

It appealed to collectors of both Swatch watches and Disney memorabilia.

The example pictured here came in its original box, complete with protective cardboard sleeve and individual edition number – 5,905. It was in good working order, and was offered for sale in 2022 at $495.

This Raro model was produced in 1991. It celebrated the centenary year of Italian jewelry firm Gioiellerie Azzali, based in Mantua. And it had a suitably high-end look, with a crocodile look leather strap and friezes in 750 purity gold.

It was another limited-edition design – and in this case, the limit was considerably stricter than other models. Only 133 of the watches were made.

Swatch model YCG401 was produced in 2002 as part of a collection honoring the Ian Fleming character James Bond. That year saw the 40th anniversary of the Bond franchise, as well as the release of its twentieth film, Die Another Day.

This watch commemorated the film Goldfinger. It had a chronograph dial with rose gold accents and a smart leather strap. And it was presented in a box with 007-themed artwork.

This example is in mint condition, complete with the original box, box sleeve and paperwork. If you want to get your hands on it, it will cost you $500.

They were a great example of Swatch’s innovative approach to marketing. They were made available at vegetable and fruit markets, underlining their low cost appeal.

But if you want to get your hands on the collection today, you’ll have to spend considerably more. Depending on the condition of the watches, they’ll set you back at least $500.

The 1988 model GZ110 was known as “Le Temps Punctue”, French for “punctual time”. It may have been a play on words referencing “A La Recherche de la Temps Perdu”, the seven-volume novel by Marcel Proust. (La Temps Perdu means “Lost Time” – not so good for a watch!)

The unusual design by the Belgian artist Pol Bury featured a dial with only one hand. It was another limited edition, with a high price tag. When first released, it sold for between $800 and $960.

Today, this example, without a box and with three scratches on the dial, is on sale for $525.

This is another limited-edition watch, and another example of Swatch collaborating with an artist. That artist was Sam Francis, and this watch was released in the 1990s. Production was limited to 49,999 watches – so not really that limited at all!

This one is number 6,733. But what makes it particularly special is that it’s signed on the strap by the artist.

The plastic surface has seen the lettering smudge slightly. And the strap has degraded over time, so it’s not recommended for wear. This is strictly a piece for collectors to look at, in its – original – box.

It comes complete with all the original paperwork bearing a sales stamp for Geneva 1992. And it’s on sale from the Amsterdam Swatch store for $545.

This unisex watch was manufactured in 1984, just a year after Swatch released its first watches. The model number was GA100. It bears the words “Don’t be too late!” in the 12, 3, 6, and 9 positions on the black dial. The hands are white.

The early release of this watch makes it quite a rare find, particularly in mint condition.

This example has signs of only light wear, and is in good working order. It bears the production code 4391P, indicating it was made on the Monday of the 39th week of 1984. And it comes in an anthracite gray plastic case, which carries some marks of handling.

This collectors’ set was released in 1995 to mark the centenary of cinema. It includes three different watches, each one a collaboration with a celebrated director.

“Eiga-Shi”, model number GZ141, was a collaboration with the Japanese filmmaker Akira Kurosawa. It bears a striking image of an eye on the dial.

“Despiste”, model number GZ142, was created with Pedro Almodovar. It had a brightly colored dial featuring his signature, and a beaded bracelet.

“Time to Reflect”, model number GZ 143, was made in collaboration wtih Robert Altman. It had a mirrored dial, with one hand forming the words “time to” and the other “reflect”. Altman’s signature was printed on the bracelet.

This set contains all three watches, complete in the original presentation tin and with all the associated paperwork. If you want it, you’ll need to spend $750.

Haring and Swatch continue to work together. A line of watches designed by the artist and featuring Mickey Mouse was released in 2021.

This collection, though, was the first collaboration with the artist. If you want a 1986 model, you’ll need to spend big bucks.

The example on the far right of the picture – with the black face and strap – sold online in 2022 for $1,300. It was in good working order, but there was minor wear to the rubber bracelet.

This model is from the very first year of Swatch production, 1983. It was model number GN700 and was the eleventh design Swatch issued.

It’s a gent’s watch, with a dark blue dial and bracelet, and white hands. There are no numbers, just small lines on the face to indicate the hours and minutes. A day date window is positioned at 3 o’clock.

This example shows signs of its age, and doesn’t have its box. The Plexiglass lens is in good condition, though, and the strap has no splits.

If you want to own this piece of Swatch history, it will set you back $1,940.

Swatch’s Diaphane One was a true original, utilising a new movement known as a carrousel tourbillon. It had a unique mechanical rewind which revolved twice an hour on its axis. It was issued in 2001, with a strictly limited run of 2,222.

Of those, 222 watches were even more niche, being produced specifically for the Place Vendome in Paris. And 1,999 were embellished with a 0.075 carat diamond. The case was made from a combination of plastic and aluminum.

With Swatch fans recognising it as something special, the watch quickly sold out. This example, with a diamond and with its original box and paperwork, is on sale for $4,200.

These two designs were produced in 1985 in homage to the band The Velvet Underground. Each watch was wrapped by hand in a stocking of a different color.

They were intended to be sold to nightclubbers at an underground party in New York. But they weren’t produced in time, and were instead sold to American Swatch employees.

These two examples bear the model numbers GZ999W and GZ999B. The final letters reference the colors of the stockings – white and black. They have been reserved by a buyer at the price of 5,500 Euros – the equivalent of about $5,800.

The Oigol Oro, model number GZ113, was issued in 1989. Its design was by the famed Italian sculptor and painter, Mimmo Paladino.

He interpreted his brief as “not to decorate a watch, but to design time”. The result he believed, was a “poetic symbol of passing time”. It featured a white dial with an abstract face, unusually shaped hands, and the 3, 6, 9 and 12 printed as though reflected in a mirror.

The production run was strictly limited to 140 watches. Seen as works of art as much as timepieces, they were sold on the secondary market as early as 1992. One such watch sold at the British auction house Christies for over $15,000.

Today, you can find an example in non-working order, with a plastic strap that has deteriorated and would break if worn. The price for such a watch? $8,400

The Jelly Fish Swatch was the creation of British designer Andrew Logan in 1985. It was produced for that year’s Alternative Miss World competition, established by the artist in 1972. Swatch sponsored the event, the theme of which was “Under the Sea”.

Unlike the normal Miss World, this competition was open to everyone, male and female. And all contestants were judged on the same criteria as used in the dog show Crufts – poise, personality and originality.

The Jelly Fish watch was decorated with faux pearls, gemstones and fragments of Christmas baubles. The strap was shaped like a fish, and only 50 of the watches, plus one test piece, were ever produced. All were signed by the artist to the reverse.

The first in the line was colored silver, but the others were shades of blue. Logan made one of the watches into a pendant, which sold for $10,000. One of the blue watches recently sold online for $10,360.

In 2007 Swatch launched a daring foray into the world of luxury watches.

The design was based on the Diaphane One, which had already featured a diamond. This version, the Diaphane One Turning Gold, was a skeleton watch with a 25 ruby movement and a flange, bezel and crown in 18-carat rose gold. The strap was made of leather.

But it still reflected Swatch’s roots: the ruby movement was encased in translucent plastic. It could be seen from both the front and back of the watch. And it was unique, neither carrousel nor tourbillon, with a central cage that completed two revolutions an hour.

Only 100 of the watches were made and they were only available in selected markets. Each piece bore its unique number inscribed on the flange.

The price of the watch has varied significantly over time. On its first release, it sold for around $8,000. And prices on the secondary market have been as high as $18,775.

The Kiki Picasso was the first in Swatch’s series of art watches. The production run was limited to 120.

Kiki Picasso was actually the French painter Christian Chapiron. The watch dial featured a portrait of his wife, Minh, with different colorways on the different watches. A number of prototypes were also produced, showing the portrait facing both left and right.

At a Christies auction in 1992, the height of Swatch mania, a four-color dial version of this design sold for $28,000. Prices since then have dipped, but this watch is still the crème de la crème for Swatch collectors. Today, you can expect to pay around $22,600 to get your hands on one.

The Value of Time

That brings us to the end of our look at 17 of the most valuable Swatch watches of all time. For a brand that started out providing affordable “second watches”, the prices achieved by the best examples today are eye-watering.

We hope you’ve enjoyed learning more about these watches. And if you have one at the back of a drawer, perhaps it’s time to get it professionally valued!