When it comes to iconic American brands, Starbucks is surely one of the biggest. And that means that its merchandise can be amazingly collectable.

Humble items like mugs can achieve some truly astonishing prices. And if you have one yourself, you’re probably wondering how you know if its valuable.

That’s where we come in. We’re going to look at 16 of the most valuable Starbucks mugs ever sold. And we’ll explain just what it is that makes them so highly prized by collectors.

Most Valuable Starbucks Mugs Worth Money Many of the most collectable of Starbucks mugs are those that honor particular places. The value depends on the rarity of the specific location. And some mugs can fetch surprisingly high prices.

This one is from the Starbucks City Mug Collector Series, and it bears the name of Haifa in Israel. The design – black letters with a blue anchor on a white ground – is clean and contemporary. It was created by Jan Belson, and the mug was issued in 2002.

It has a standard 16-ounce capacity, and it’s in excellent condition. It was sold on an online auction platform in 2022 for $175. That’s the kind of money that would make you think twice before filling it with your favorite brew! Starbucks made many lines of mugs commemorating cities and places in the world. One of the rarest is the “You Are Here” collection – and some of these mugs are highly sought after.

As ever, it is the rarest examples that are most prized by collectors. This mug, featuring the city of Seoul in South Korea, is one of those. It was released in 2016, so it’s relatively recent. The fresh blue colorway and attractive art deco design meant it was quickly snapped up. 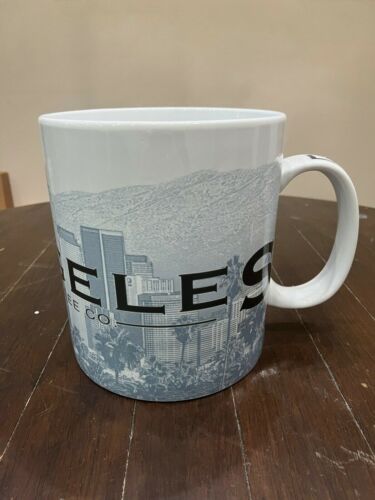 Mugs featuring US cities are often made in greater numbers. That can mean they’re less collectable – but there are exceptions.

This oversized mug showing the Los Angeles skyline was issued in 2002. The handle bore the name of the city, and inside the rim was printed “City of Angels”.

It wasn’t an everyday item – it was able to hold a massive 2.5 gallons of coffee. That meant it was more expensive when it first retailed, so was made in lower numbers. And today, that means it’s hard to find – and very desirable. 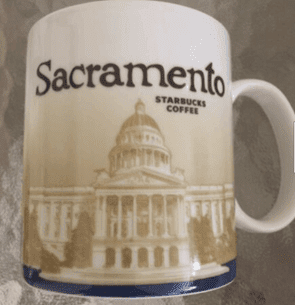 This mug comes from Starbucks’ 2009 Icon City Series. It carries the name of the city of Sacramento in black print across the top. Below it is a picture of the California State Capitol, depicted in sepia. A striking band of deep blue at the bottom adds contrast.

Turn it around, and the reverse of the mug shows the city skyline.

This is another mug that is sought after by collectors because of its rarity. Examples in good condition can command premium prices. This one sold at auction online in 2021 for $405.

But note – prices can also fluctuate wildly, and condition is key. At the time of writing, you can pick up a decent quality example for under $100. 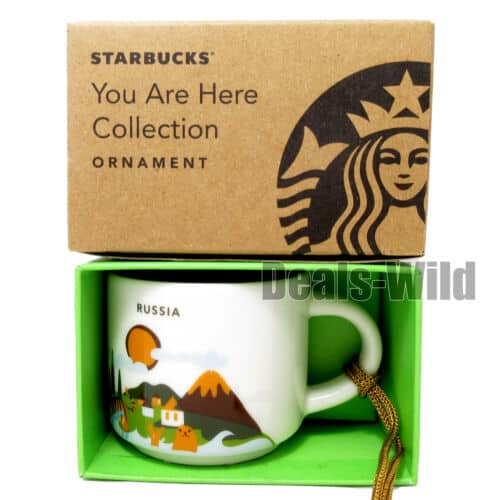 This mug shows Starbucks collectables don’t have to be old to command high prices.

It’s an espresso cup, so it’s much smaller than a standard mug. It holds 2 fluid ounces – enough for a single or double shot.

It’s part of the second “You Are Here” series, which was released by Starbucks in 2019. And it’s as much an ornament as it is a drinking vessel. It was made for Russia and shows a rural landscape with mountains and animals in a palette of greens, orange and brown.

It was in perfect condition when it went on sale in 2022, having never been removed from its original box. One collector snapped it up for $495. This is one of the older mugs on our list, having been released in 2002. It was produced for visitors to Starbucks in Istanbul, and today it’s very rare.

The striking design is described by some as the “Evil Eye”. It features a blue ring with a black dot in the center between the letters “t” and “a” in the city name. On the handle, “Starbucks” is printed in black lettering.

It’s has a capacity of 16 ounces. But you may want to keep it on display rather than drinking from it. An example in good condition, but without its box, is currently on sale online. And if you want it, it will set you back $525. 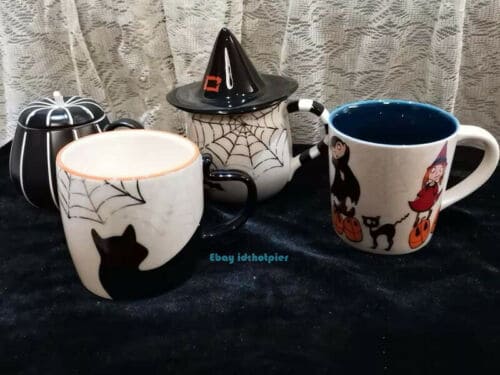 As well as being souvenir pieces for particular cities, Starbucks often produce mugs to mark holidays. This set of four had a witchy theme, produced for Halloween.

The quirky designs featured two with ceramic lids to keep your drink warm. One was styled as a black pumpkin. The second was decorated with cobwebs with a lid in the form of a witch’s hat.

The third featured a cobweb and black cat, while the fourth depicted a young vampire and witch balancing on pumpkins.

The designs are no longer available – which of course adds to their appeal to collectors. We could find only one set for sale online, and it had an asking price of $550. 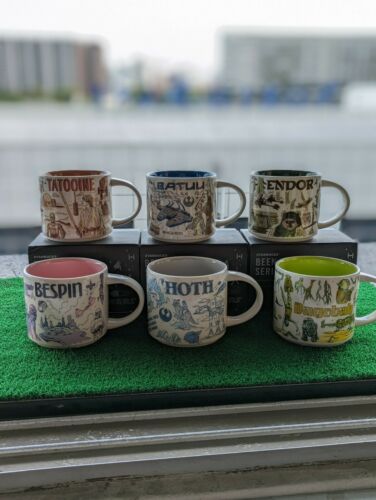 When it comes to iconic films, there are few that inspire such passion among collectors as Star Wars. So a set of commemorative mugs from Starbucks will have plenty of interested buyers!

This set was produced as a comic take on the Starbucks “Been There” series. Instead of real world locations, the mugs depict places in the Star Wars universe. There are six in the series, one each for Tatooine, Endor, Hoth, Batuu, Bespin and Dagobah.

A full set went on sale online in 2022. They were in great condition, and came complete with all their original boxes. The asking price was $600. 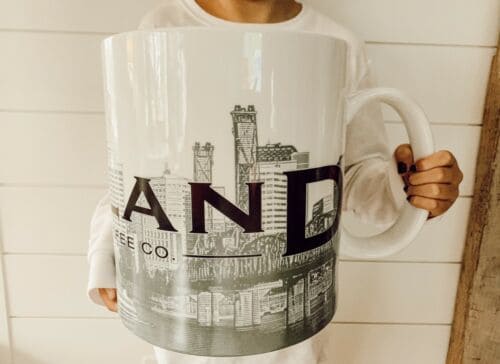 In 2002, Starbucks issued a range of mugs celebrating the state of Oregon. This one was specifically for Portland and bore its nickname, “The City of Roses”, inside the rim.

It was the first series of such mugs, and this one focused on designs showing city skylines. And there was something else that was pretty special about it: it was HUGE.

It stands 10.25 inches high and has a diameter of just over 9 inches at the rim. (The image here shows the mug being held by a 10-year-old child – so you can see just how big it is!)

It has a white ground with the cityscape printed in teal. “Portland” is printed in black lettering across the image, and again down the handle.

This is another design that these days is hard to track down. This example was put on sale online in 2022. It was in good condition, with no cracks or chips. But there was a small flaw in the glaze on the rim. It made the princely sum of $600. 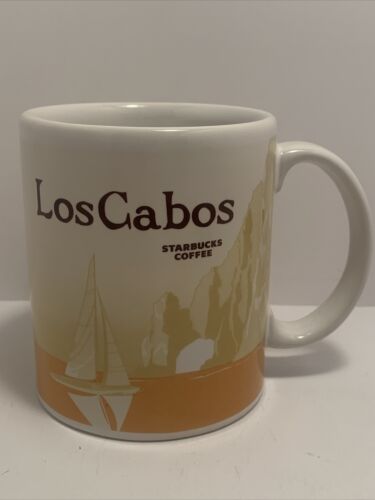 In some cases, circumstances meant that variant designs were produced. And those mugs, usually few in number, can be some of the most highly prized by collectors.

This one depicting Los Cabos was made in 2009. It’s unusual because the design is in yellow and features a whale. Only 300 of these mugs were produced, which makes them rare and desirable.

They’re also unusual for another reason. As with so many companies, most of Starbucks’ merchandise is manufactured in China. But when these mugs were made, their usual supplier was experiencing delays. As a result, they were crafted in Mexico instead.

This example was put up for sale online in 2022. It was in good condition, with just a couple of tiny manufacturing flaws in the glaze. The asking price was $700, with the seller accepting a lower offer from one lucky collector. 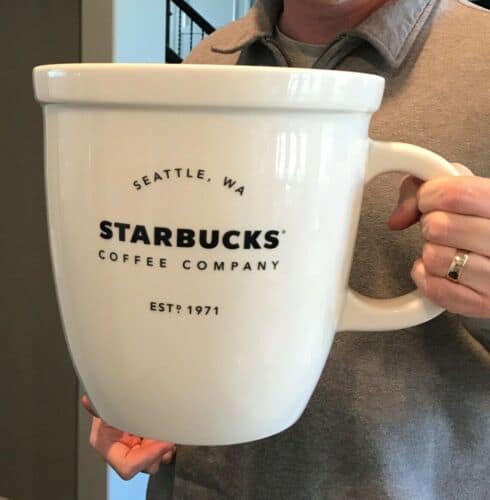 This is another giant-sized mug that commands a giant-sized price! The Giant Abbey design was produced in 2016. It had a simple design of classic black font on a cream ground. And it held an impressive 138 ounces of coffee.

It was a limited edition and sold out quickly. Today, examples appear quite regularly on the secondary market, commanding a range of different prices. We’ve seen collectors snap them up for anything from $600 to $800. And one pristine example is currently on sale with an asking price of $1,599. 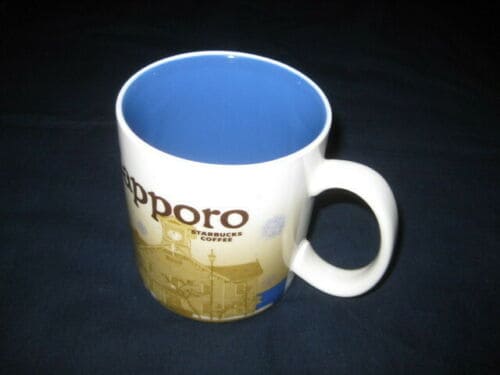 The Japan Icon series is another collection that’s highly sought after. And rarer examples can fetch very high prices.

This mug fits the bill. It’s a souvenir of the Japanese city of Sapporo. The design is similar to other City Icon mugs, with the name in brown print over the sepia toned image. The interior of the mug is a pretty shade of blue.

This example came up for sale in 2022 and was in excellent condition. It was snapped up by a collector for $795. 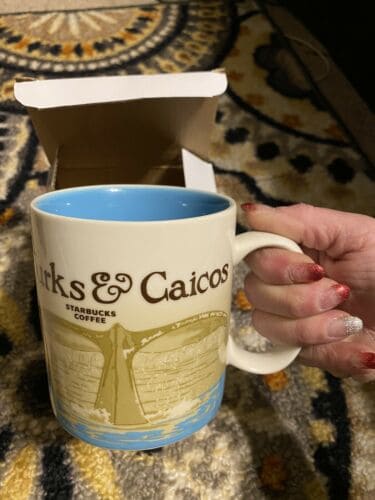 This 16-ounce mug from Turks and Caicos is one of the Starbucks’ Global Icon series. And as these mugs go, the location is one of the most scarce. It was reputedly never for sale at a Starbucks, but a few were produced as collectors’ pieces.

Examples do come up for sale from time to time. And the prices can vary widely.

The mug pictured here was offered for sale at $1,000, with the seller accepting a lower offer. It was in excellent condition, and came in its original box. Another example with its box is currently on sale with an asking price of $1,450.

But if the box isn’t there, the price drops fast. A good example of the mug without a box is on sale for $450. 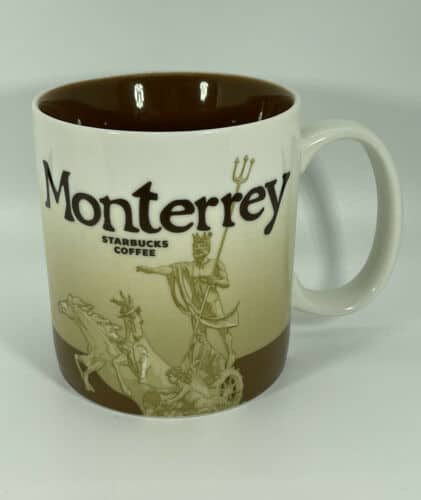 The Monterrey mug from the Global City Icon Series is a Holy Grail to collectors of Starbucks mugs.

The mug was sold in Starbucks in Monterrey, Mexico, and the design has since been discontinued. The picture is printed in brown, with the Fountain of Life on the front and the Museo del Acero on the back.

This example was offered for sale on an online auction site in 2022. It was in near-perfect condition, with just one small fracture to the underglaze.

Bidding was fast and furious. And when the auction timed out, the mug was snapped up by a determined collector for $1,120. 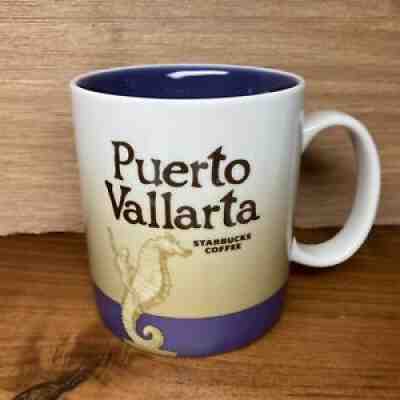 The Puerto Vallarta is well known as one of the rarest and most collectable of Starbucks mugs. Tracking one down at all is tough. And when they do come up for sale, competition amongst buyers is fierce. 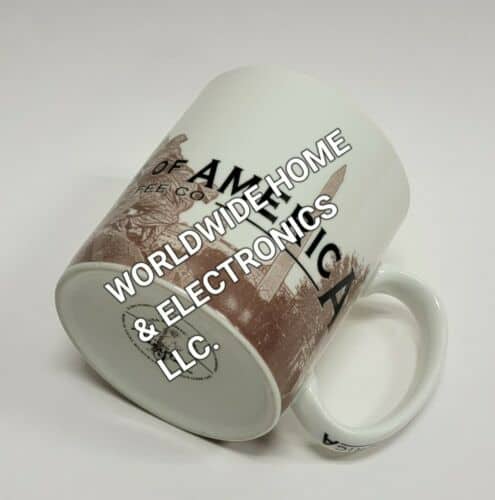 The Iwo Jima mug from the 2002 USA Scenic Series is the rarest of all Starbucks mugs. That’s because it was originally available for sale for less than three hours in one specific location – a Starbucks in the Pentagon building, Washington DC.

The USA Scenic Series had been produced in the aftermath of the terrorist attacks of 9-11. It featured four designs, including one that portrayed the raising of the American flag at Iwo Jima in World War II. But customer feedback was that it was too militaristic, and it was quickly pulled from sale.

The recalled mugs were destroyed, and today only around six are thought to survive. When this one came up for sale in March 2022, it netted the lucky seller an incredible $18,995.

That brings us to the end of our look at 16 of the most valuable Starbucks mugs out there. We hope you’ve enjoyed learning more about them.

And if you have one of these precious mugs on your shelves, we’d recommend not using it for coffee! Sell it, and you could keep yourself in Joe for a long time to come.