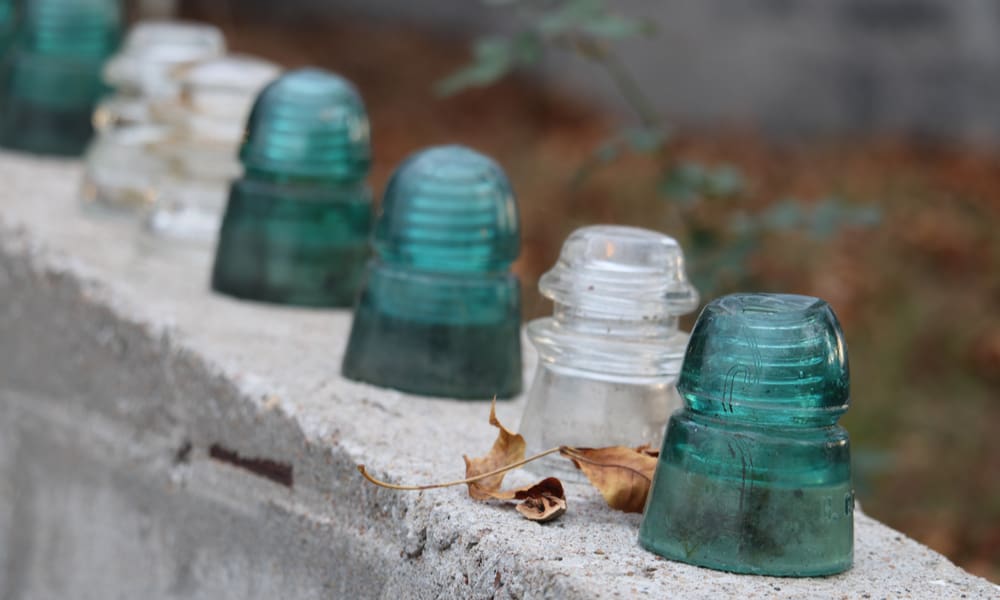 Are you a collector of glass insulators?

Have you recently developed an interest in these tiny but beautiful glasses used on telegraph and power lines?

Collecting glass insulators may seem like an odd hobby to many. But, a considerably large group of enthusiasts is interested in antique insulators. If you are one of them, you might be curious about the most valuable glass insulators.

Insulators made from glass were first used in the 1850s on telegraph lines. Later, glass became a popular insulation material for electric and telephone lines.

By the mid-1960s, people began collecting antique glass insulators as a hobby. Knowing about the most valuable glass insulators isn’t just an interesting piece of knowledge; with the information, you can make a smart decision whether you are looking to buy or sell your insulators.

In this guide, I have included the most valuable glass insulators. As you will see, the estimated market value for insulators made from glass ranges from just a few hundred dollars to thousands of dollars.

So, let’s jump in! Here are the most sought-after glass insulators:

Most Valuable Glass Insulator Worth Money 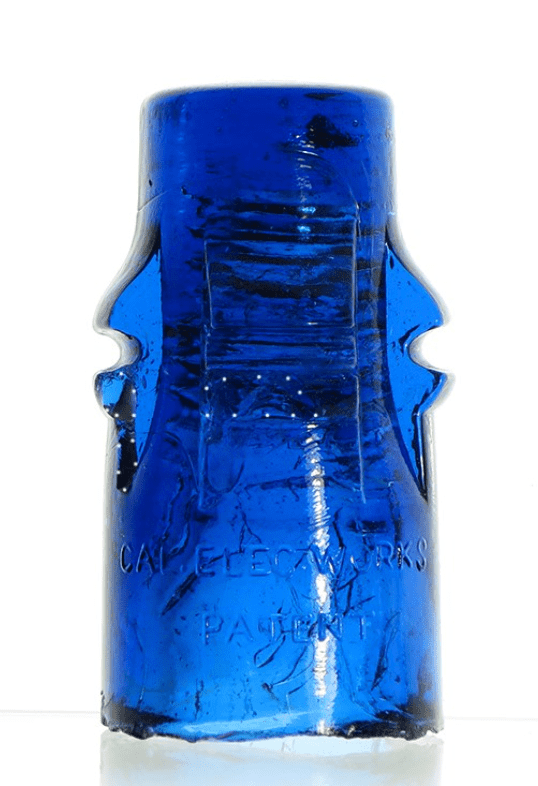 The California Electrical Works Company pioneered the use of CD 130.1 glass insulators. These insulators were first used in the 1870s as part of the first long-distance telephone line between French Lake and French Corral in California.

This hallmark line was installed to make telephone communication possible for the blossoming hydraulic mining industry in the Sierra Nevada Mountains.

The CD 130.1 glass insulators are deep cobalt blue. The attractive color and the insulator’s unusual design make it particularly attractive to collectors. 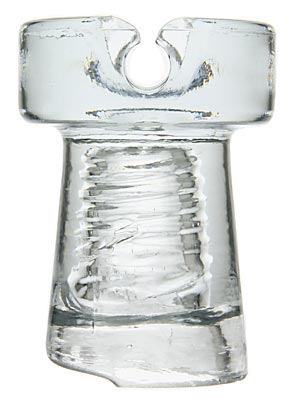 The Twiggs insulator has a unique design and is quite different from the standard dome-shaped insulator. It is unusually top-heavy with a significantly large done and a narrower base.

Twiggs glass insulators are also noticeably tall and will stand out in any collection, making them a desirable find among collectors.

Today, there are only 13 models of the Twiggs CD-141 insulators. This tells you how rare this insulator style is. Aside from the unique shape, this insulator comes with a slot at the top where two balls wedge the electric or telegraph wire.

Twiggs insulators are coveted for their quirky design, clear glass color, and size. These insulators stand at more than 4ft. 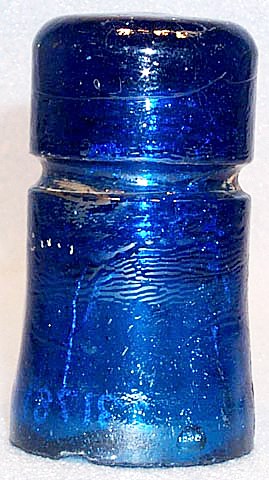 EC&M insulators date as far back as the 1870s. While they come in several colors, the cobalt blue ones are particularly valued.

Many of the EC&M insulators in collection today were used in telegraph and electric lines in the mining fields in Nevada, California, Arizona, Utah, and as far as British Columbia in Canada.

The most valuable of them are those in immaculate condition, especially around the skirt and dome areas. There should be a few chips and cracks for the EC&M insulator to have a good market value. 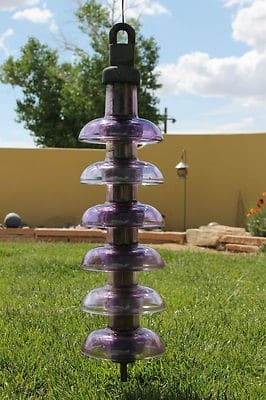 Cochrane Bells borrow their name from their bell-like shape. Their inventor, Harry Hamilton Cochrane, patented these bell-shaped glass insulators in 1916.

Cochrane Bells were mostly used in Montana and specifically on the 65KV, 131/2-mile line, which connected the Bertha substation in Corbin to the Porphyry Dike mine.

The little glass bells are piled up on an oak rod soaked with paraffin and separated by cork washers. The entire assembly is held in place by cap screws on either end of the rod.

Antique Cochrane bells come in fascinating shades of purple, including light, near-clear to deep royal purple. Most glass insulators have a canonical shape, making these bell-shaped ones extremely rare and equally valuable. 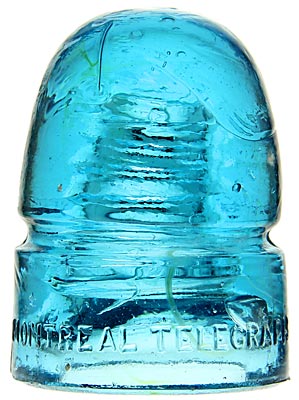 The Montreal Telegraph Company was among the first communication companies in Canada, founded in 1847. The company used light blue glass insulators for their telegraph lines until the 1880s when new color variants emerged.

The insulators collected between 1847 and the early 1880s are rare today but sought after for their physical beauty. These Montreal Telegraph glass insulators are slightly taller than the standard insulator but have a milky hint if looked at carefully.

Look out for the words ‘Montreal Telegraph’ on the side to verify the authenticity of a CD143 insulator. The Western electric manufacturing company is the original producer of this rare-colored gem. Few glass insulators come in a true cornflower blue color, making this one particularly rare and, therefore, high value.

These insulators are actually light bluish with a hint of green and make for the perfect addition to your collection or as an accent decoration in your office, living room, or bedroom. 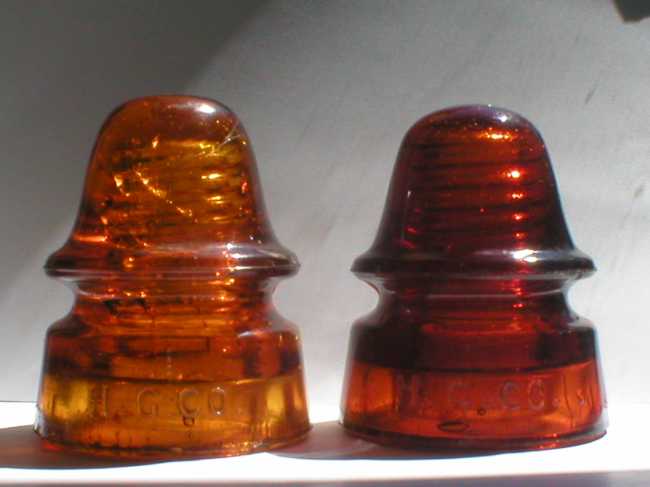 The H.G. Co amber glass insulators are also a collectors’ favorite. The deep blue ones are equally popular but so are the amber glasses for the bold collector who isn’t afraid to try something different.

The amber-colored insulators by H.G.CO are the lightest and probably most vibrant of all the color variants. These insulators are also sought after due to the presence of small bubbles that add pop and visual interest. 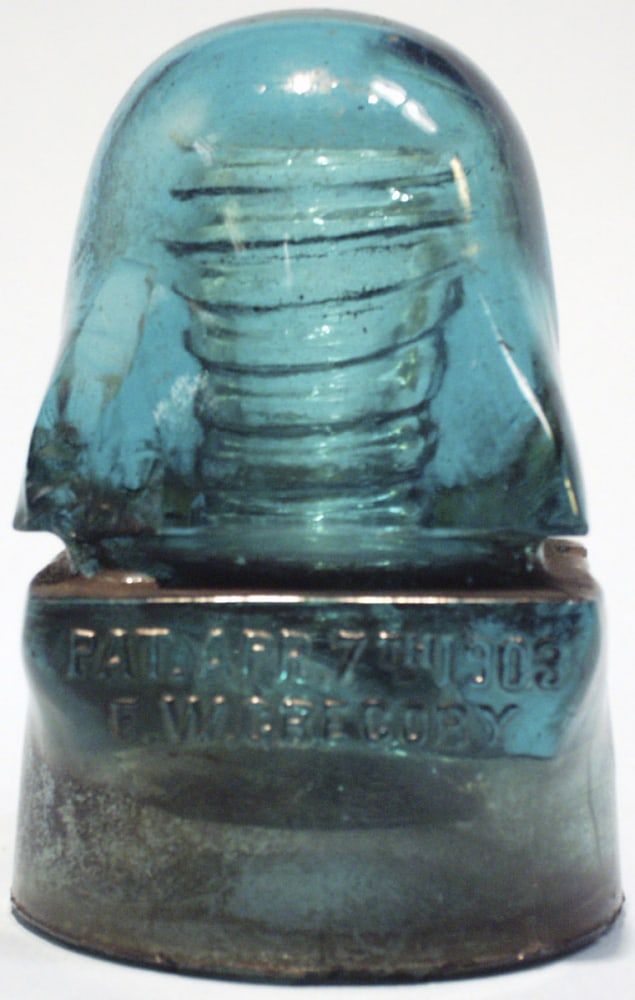 The Gregory glass insulators were made in 1903 for use on the railroads of the Central Pacific Ocean and the Sierra Nevada Mountains in California.

Available in aqua green color only, these dome-shaped insulators are collected mainly for their deep attractive color and unique style.

In addition to the dome-shaped top, the insulator comes with a hollow leading to the dome’s interior. Its consolidated design (CD) is etched boldly on the side of the skirt. 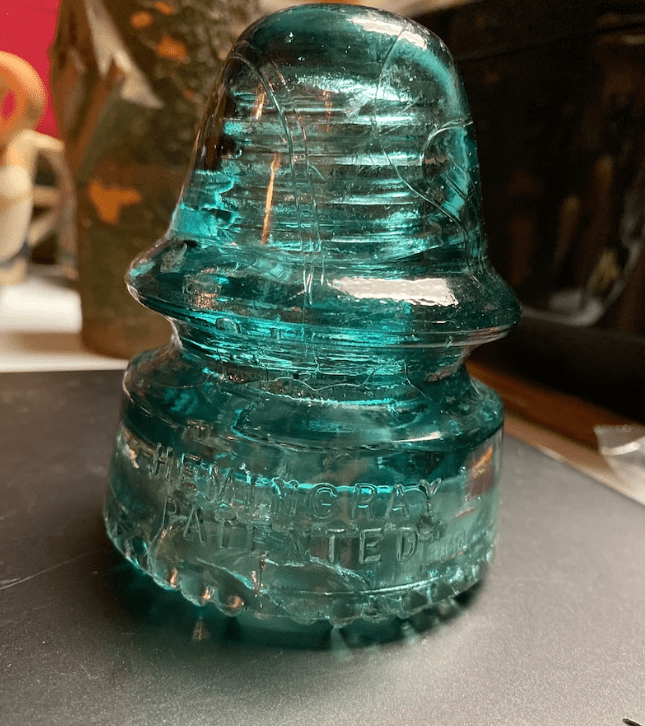 The Hemingray Glass Company produced the DC 151 H.G.Co. Insulators in 1987. The insulators were used ON communication lines belonging to the North American Telegraph Company.

Most H.G.Co glass insulators originate from Minnesota and Wisconsin, where they were first used. Today, these insulators are scattered all over the country.

The peacock blue glasses are the most sought-after among collectors. Insulators with this deep rich color can be used in many high-value applications, such as in the making of high-end chandeliers and candle holders. 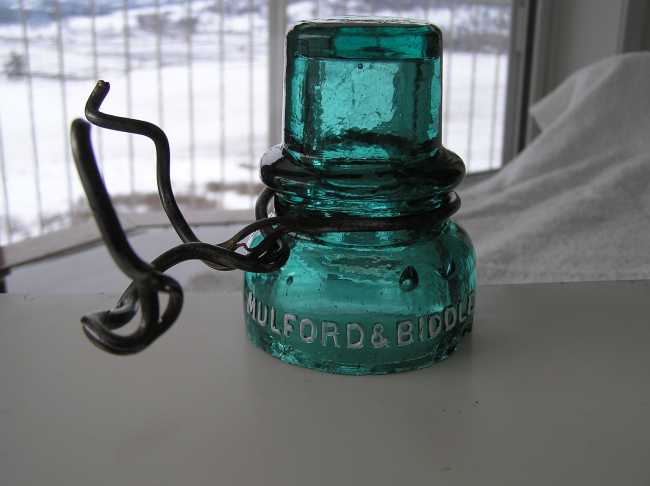 The Mulford & Biddle insulator takes the shape of a pilgrim hat, giving it an outstanding design coveted by collectors.

This model of insulators comes in various hues of aqua, teal, cobalt blue, and plain blue. What makes it even more collectible is that it is a threadless glass insulator, popular between 1840 and 1870.

Mulford and Biddle glass insulators were first used in railroads. Those originally used on the UPPR railroad are embossed with the company’s initial, UPPR, making them easily identifiable. 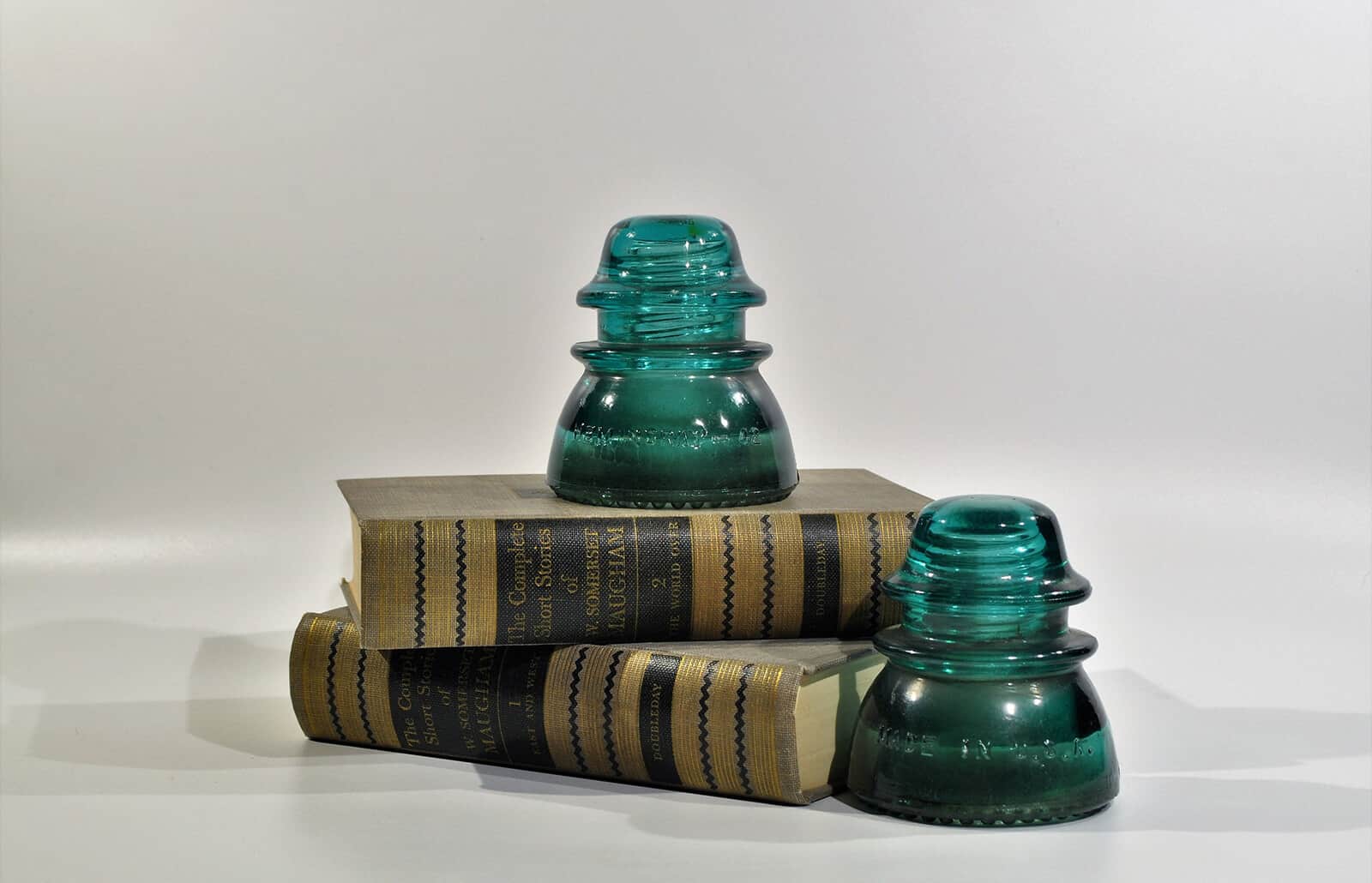 These insulators are easily identifiable by the company’s name and style number. Markings, dots, dashes, and numbers are other identifiers that may specify the year the glass was manufactured.

Hemingray insulators come in many different colors, but blue is the most common. Anyone who grew up in the 1950s will attest that Hemingray is the brand name for all glass insulators.

Aside from the classic blue, these insulators also come in light green, ice blue, and aqua colors. 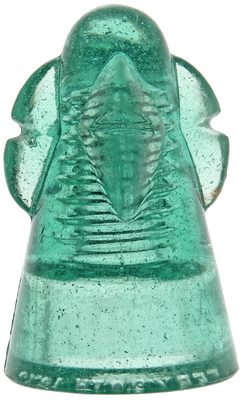 The CD 141.9 Emminger’s glass insulator is an all-time classic; collectors, even seasoned ones, drool at the word Emminger’s.

Emminger-style insulators were initially produced and used on the railroads in Pennsylvania. You will find a large collection of these insulators originating from that area. The cone-shaped insulators were deliberately designed to prevent dirt and dust from gathering on their surface.

Emminger’s insulators come with lozenge-shaped projectors meant to keep dust and dirt from the insulator. It is common for many of these popular insulators to come with damaged or worn-out projectors. These insulators are also more prone to breaking than comparable glass insulators.

Still, few insulators can match the Emminger’s, which is an inch taller than the standard insulator. Its angelic shape, unique design, and deep green aqua color make it a collectors’ favorite. 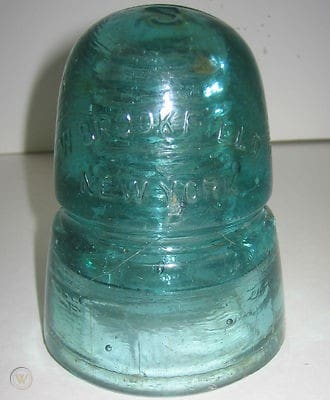 The Brookfield company was among the leading producers of glass insulators, with most of them coming in a blue-aqua color.

The CD-145 is the most valuable and sought-after of the Brookfield range of glass insulators, standing 4 feet tall. Companies used these insulators on railway and telecommunication lines.

Hundreds of the W Brookfield glass insulators can be spotted on the southern pacific railroad in New Orleans and neighboring regions.

You can identify a CD-145 by its wire groove with a good, solid depth. These insulators also come with a letter B marked between the wire groove and base. They also have the numbers 7,8,10,11,12 and feature a dot at the top. The Harloe Insulator company produced glass insulators for use on telephone lines from 1900, making them some of the oldest and, therefore, rarest collectible insulators made from glass.

The most popular Harloe insulator is the CD-112. Its neat and simplistic style and unique cobalt blue color make this a coveted insulator.

Harloe insulators feature a keg design and will definitely stand out in your collection. The Corning Glass Works Company is the original producer of the Pyrex glass insulators. These are used in telephone lines and other low voltage functions.

Pyrex insulators were made for high voltage applications. Most models were designed to be quite large, but the CD-128 was particularly small.

The CD-128 Pyrex glass insulators were the smallest the company produced, making them rare and highly sought-after.

This small glass insulator comes with two lines of threading. This allows you to use it in more than one way, making it a more practical and useful insulator than most.

To identify a CD-128 insulator, check that the words “C.S. carrier” and the PYREX logo are embossed on the skirt.

Pyrex CD-128 glass insulators have a capacity for a single wire and come in clear color. 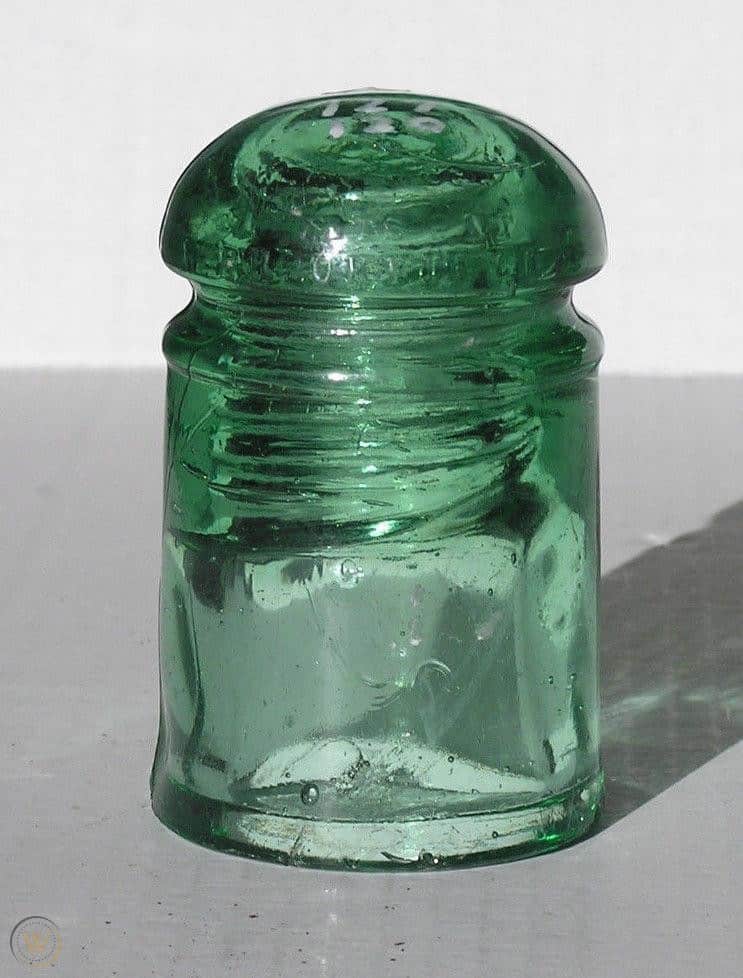 In the world of glass insulators, WUP stands for Western Union Pattern. Insulators with the letters WUP mean that they were specifically manufactured for the Western Union Telegraph Company.

The CD-127 is one of the most popular WUP glass insulators and comes in many different shades of blue. You will find CD-127 insulators in teal-blue, aqua, and deep cobalt blue.

Most of these WUP insulators originate from Oklahoma, Ohio, and Pennsylvania and are common among collectors in these regions.

The CD-127 is identifiable by its smooth base and the WUP acronyms on the glass’s skirt.

Whether used for décor or display, a vibrant glass insulator market is readily available. If you are looking to sell your collection or add some insulators to your current selection, you should carefully consider the antique glass’s age, color, condition, and shape.

The overall market conditions should also guide your decision. Before buying an antique glass insulator, find out what is popular, what is selling and has great resale value, and what will give you the best return on investment.