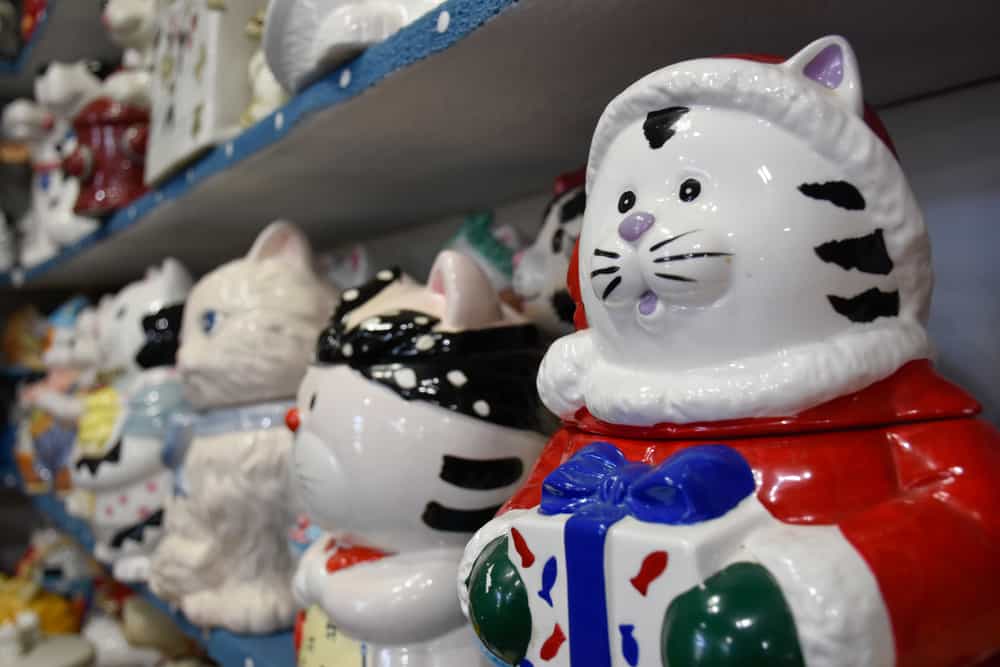 Cookie jars are some of the most colorful, playful, and fun things you can collect. Based on everything from TV shows and cartoons, to celebrities, music, and artworks, there are thousands of designs for people to collect.

And with everything collectible – some cookie jars can be worth a small fortune. But how can you tell if your jar is worth a couple of dollars, or a small fortune?

Today we’re going to talk you through everything you need to know. From the cookie jar’s importance throughout history, to what makes a jar valuable, to where you can buy and sell rare finds – and much, much more!

The history of cookie jars starts in Great Britain, during the late 18th century.

Originally called ‘biscuit barrels’, the British stored shortbread biscuits in jars made of glass, which were simple in design, usually cylindrical, and had a metal lid.

It wasn’t until the Great Depression in 1929, that American potters revolutionized the signature design of cookie jars, with different designs, patterns, and shapes. These early cookie jars started the trend of collecting differently styled ceramics.

Generally speaking, the older the cookie jar, the more value it collects. And there’#s a huge interest in some of the earliest pieces of American pottery.

After much research, it’s generally agreed upon that the first cookie jar was made in 1029, by the Brush Pottery Company of Zanesville in Ohio. The first cookie jar had a very simple design – it was colored green and had the word ‘Cookies’ painted on the front.

By the 1930s, more manufacturers were producing ceramics, and experimenting with more intricate designs. Early cookie jars were based on simple kitchen themes like fruits and vegetables.

The 1940s, otherwise known as the ‘golden age of cookie jars’, saw many manufacturers concentrate on expanding cookie jar designs. They were heavily influenced by marketing brands, with many jars taking the form of famous characters like Mickey Mouse, Woody Woodpecker, Dumbo, and Superman.

Cookie jars were created to mark changes in mainstream media. From jars depicting Yogi to the Beatle’s Yellow Submarine, and more. These pieces are highly collectible given their historical significance.

By the 1960s, industry greats such as Red Wing, Metlox, Robinson-Ransbottom, and McCoy and Bush all began to ramp up production of their ceramics. By the 1980s, collecting vintage cookie jars was a growing pop trend, helped by famous collectors such as artist Andy Warhol, who called them ‘time pieces’. In 1987, Warhol’s collection of cookie jars sold at auction for over $250,000.

Cookie jars are highly collectible. They vary so much in size, style, design, theme, and color that no two jar designs are ever quite the same. For that reason, there is a huge variance in how much your cookie jar is worth.

Some common cookie jars may only be worth a few dollars. Others, though, can easily fetch up to $4,000 or more. So what affects the price?

The better the condition, the more valuable your cookie jar will be. Any cracks or chips can reduce the value, as well as stains and discoloration. Many cookie jars are sold with their original lid, too.

You should also consider any paint or decorations – these should be clear, crisp, and sharp. On the flip side, if it’s in mint condition, it can attract huge attention.

Because cookie jars often followed mainstream trends and cultural shifts, they often are highly sought after by fans of TV shows, music, and works of art.

What was popular at the time no doubt has several cookie jar editions. Cookie jar collectors are inspired to buy things in certain themes, with some themes fetching higher prices at auction than others.

Uncommon? Or one of a kind rare?

Ceramic cookie jars were mass-produced throughout the 1930s up until the 1970s. Some jars though, have become incredibly rare and considered highly valuable.

So if you have a distinct-looking cookie jar, you should first try and date it, and see if it’s a rare edition piece. A glance at online auctions, or using a price comparison site can tell you if you have a generic piece or a one-of-a-kind.

A good example of this is the Little Red Riding Hood Cookie Jar. With several ‘versions’ of a jar, it can be difficult to know if you have an authentic Lousie Bauer from 1943, or something makers produced to look old but were made recently.

Controversy can help or hinder a product, and it’s important to be aware of social values when valuing antique cookie jars.

An example is ‘The Mammy and Aunt Jemima’ cookie jar by McCoy pottery. Many critics argue it’s a cookie jar brand rooted in racism. The Mammy line went through several rebrands and mold changes, including the words ‘Dem Cookies’ to just ‘Cookies’ between the 1940s. Selling for up to $4,600, this Fox Squirrel Jar from McCoy is one of the most valuable and sought-after cookie jars ever made. Measuring 10 ½ “ in height, the jar has special aqua colorings used at the front that make it unique and striking. It also sports a McCoy maker name on its base.

Dated 1974, Freddy the Gleep is one of the most unusual-looking, but still highly valuable cookie jars. It can easily sell for $2,500 if in good condition. It also has a McCoy production label on its base, making it a collectible for fans of the brand. 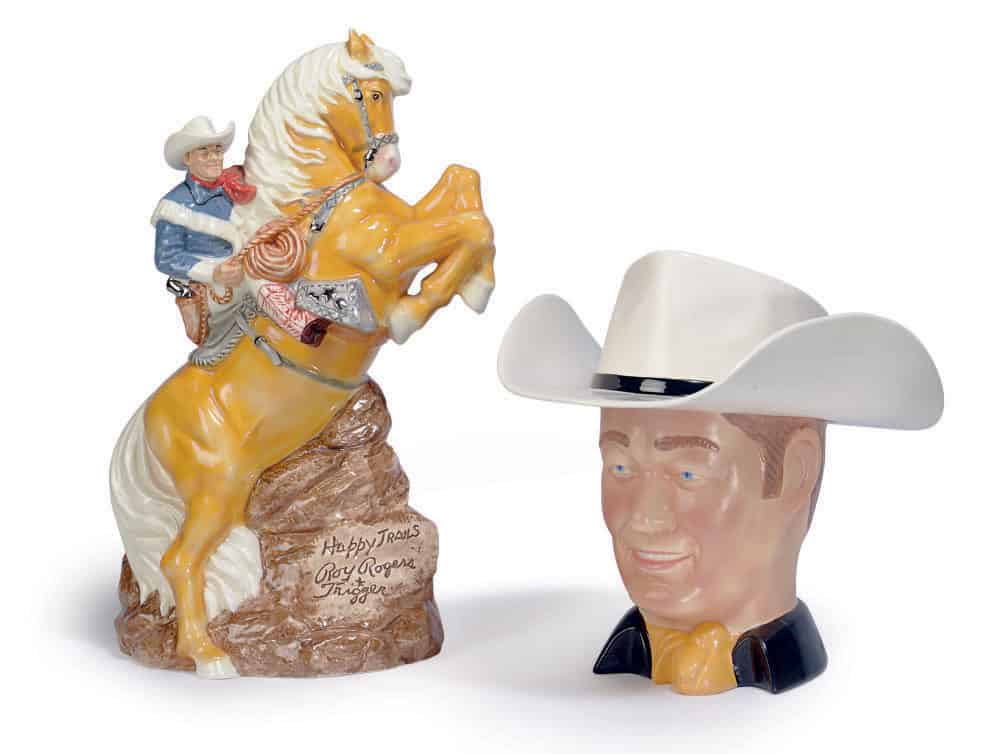 Collections always fetch a higher price at auction. And if you’re lucky enough to own both of these Roy Rogers jars from 1994, you can expect up to $1,750 at auction. These molds often have Roy Rogers signatures, making them highly sought after by fans of his. 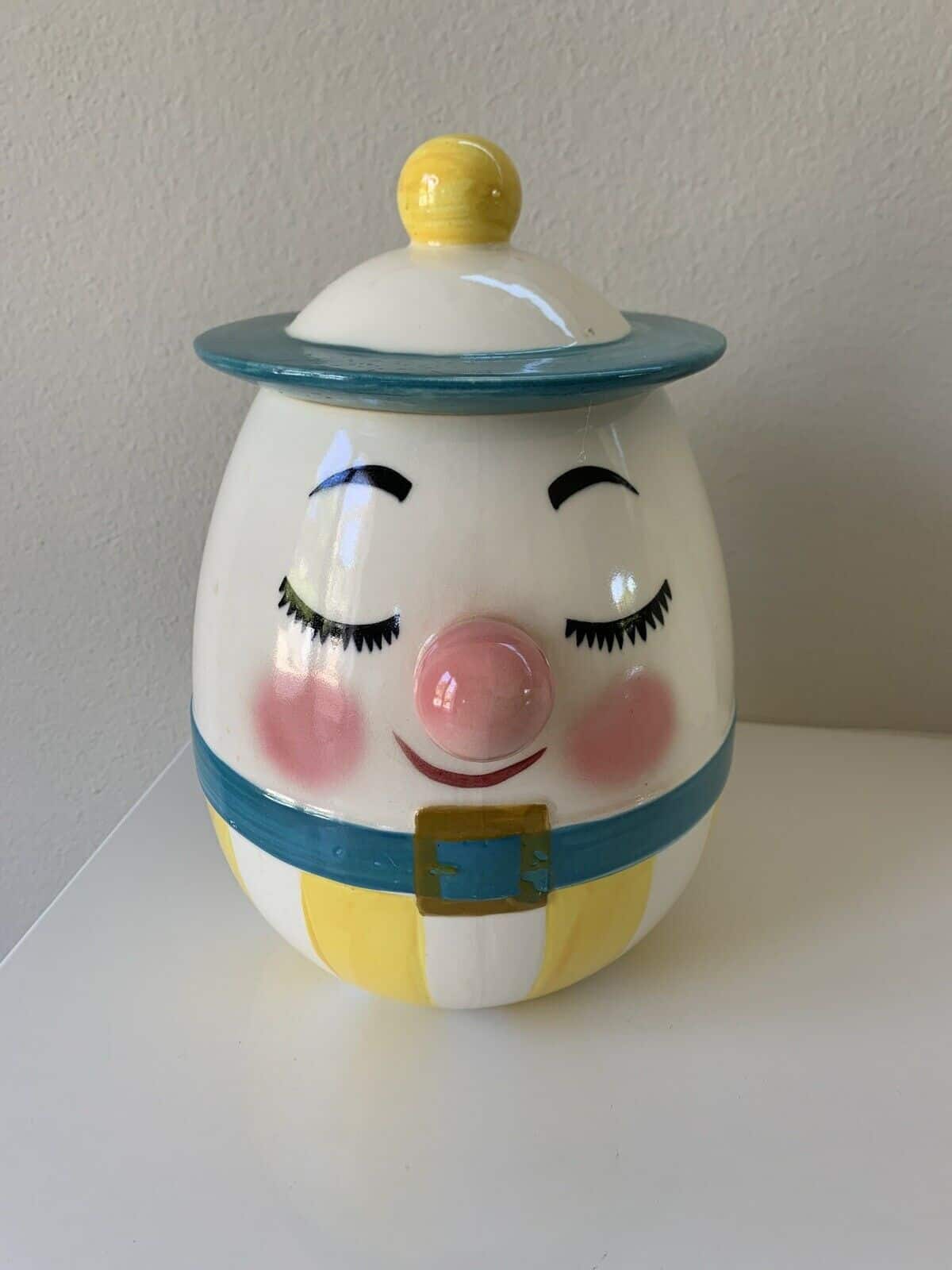 With a variety of colors used, and based on one of the most famous nursery rhymes, this Humpty Dumpty cookie jar can go for as high as $900 at auction. There are other versions of Humpty Dumpty, including one where he sits on a wall  – but this version is the most sought after.

Famous Italian ceramist Aldo Londi always fetches a high price at an auction. His signature blue glazes in particular, which come in the forms of animals, defined 20th-century ceramics.

Where can you buy and sell antique cookie jars？

Online sites are your gateway to buying and selling cookie jars. Some sites are key resources you should use regularly, although may require a subscription to use. Others are strictly auctioning sites used for selling to collectors.

Here are some of our favorites:

Worthpoint: a useful site for finding out the current market price range of cookie jars. You can also find other valuable information such as dimensions and photos.

Kovels: with a user-friendly interface, this site highlights rare cookie jar designs you should be looking for. It also has a treasure trove of useful information, from dates of production, and cookie jar descriptions, to selling guides and more.

eBay: as one of the most popular auction sites, eBay is a useful identification guide for measuring market prices. You can easily find a particular jar through its extensive database.

Etsy: Etsy is another great place to buy cookie jars. However, many Etsy sellers can sell modern reproductions as ‘vintage’ – be careful about unverified jars and always read the fine print on listings.

If you’re serious about buying and selling collectible cookie jars, the following reference books come highly recommended within the industry: